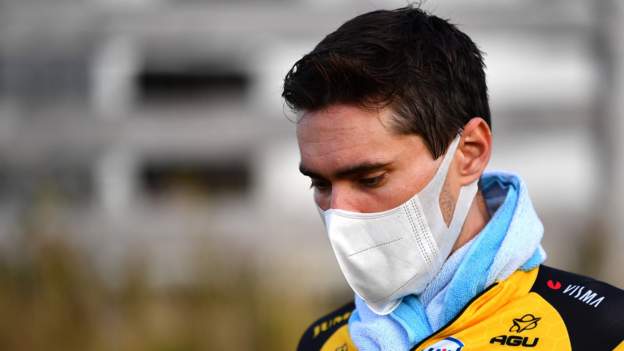 The Dutch rider’s shock decision comes just days after his Jumbo-Visma team announced their race programme for the season.

Dumoulin was set to support team-mate Primoz Roglic at this year’s Tour de France after the team dramatically missed out in 2020 to Tadej Pogacar.

“For too long I’ve cared about what everyone [else] thinks,” added the rider, who will take unpaid leave from his team. “I’ve found [the pressure] more difficult than expected.”

Dumoulin shot to prominence in cycling when he won the 2017 Giro d’Italia, in which he was famously forced to take a comfort break in a meadow because of stomach problems and still managed to win the pink jersey overall.

“You ask yourself: ‘What do you want? Do you still want to be a cyclist?’ Now I have the feeling that I don’t know anymore what to do.

“[Stopping] feels really good – as if a backpack of 100 kilos has slipped off my shoulders.”

Just days before his announcement, Dumoulin’s high-budget Jumbo-Visma team had revealed who would be leading the squad for the biggest races across the season, with Dumoulin taking more of a supporting role in many of the events.

Dutch squad Jumbo-Visma are the main rivals to Britain’s Ineos Grenadiers, who narrowly lost out to Roglic in last year’s Vuelta a Espana with Richard Carapaz.

Meanwhile, Jumbo-Visma’s young star rider Wout van Aert has signed a contract extension with the team until 2024. The Dutchman won the Milan-San Remo ‘monument’ race last year, along with two stages of the Tour de France.