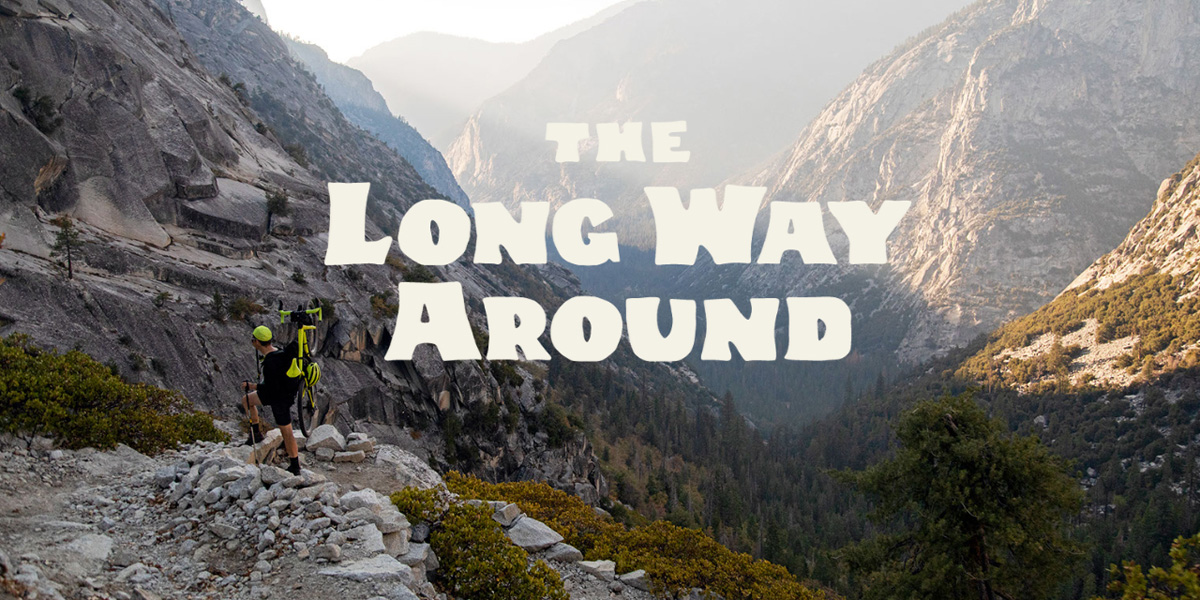 A sea-change in entertainment has given us a brave new world of cycling-related videos that through their subject matter or length or lack of star power would never have appeared in traditional media. Some promote teams, as we have seen with Deceuninck – Quick-Step, while others are used as marketing tools (albeit very subtle tools) by sellers of equipment or tours or training plans. Wahoo Fitness has a series featuring off-road riding and the most recent of these adventures was released on January 14.

“The Long Way Around” is an entertaining video, lasting less than 15 minutes, ideal for our Attention Deficit Disordered era, and tells the story of a weekend out with four bikepackers cycling in the Sierra Nevada Mountains of California in mid-October 2020. Participants are Erik Nohlan, Rue Kaladyte, Chris Burkard, and Lael Wilcox, all obviously experienced riders. Lael Wilcox in particular seems to have become the Unofficial Queen of Endurance Bikepacking as there is hardly a magazine these days that does not feature her riding in some exotic and desolate obscure corner of the planet. 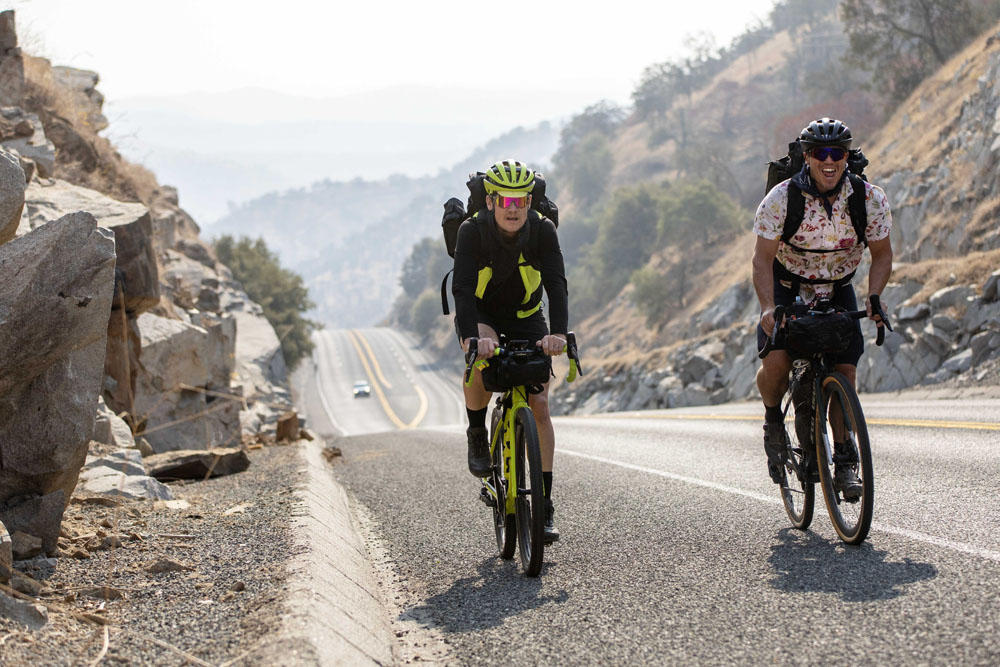 The route that the group wanted to ride required some major variation–hence “The Long Way Around” title—due to the catastrophic fires experienced in California at the time. One has a sense of the damage done as the group rides through landscapes of cinders and barren trees. The 300 km trip the cyclists undertake begins in a lowland area, then rises gradually with a long climb before an exhilarating return to the starting point. 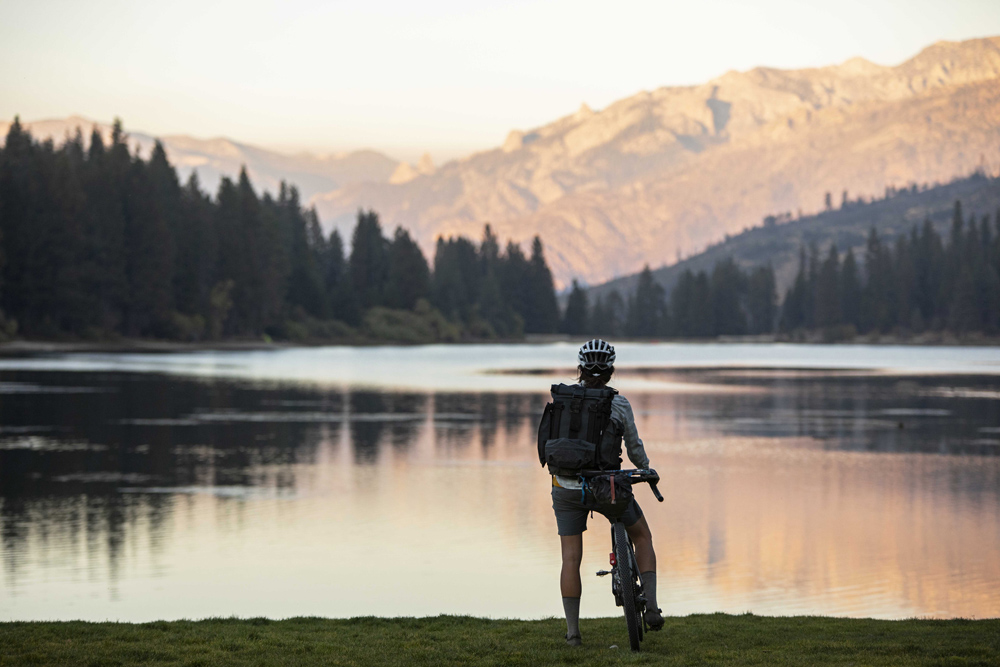 The video, narrated by Chris Bauer sounding like an old prospector or maybe Sam Elliott, follows the group as their trip takes them through King’s Canyon Park and Sequoia National Park, with views of Mount Whitney, the highest peak in the contiguous United States. Where the scenery is not blighted by fire it is quite spectacular and as the group leaves the smooth asphalt for trails in the bush one has a sense of wilderness grandeur. 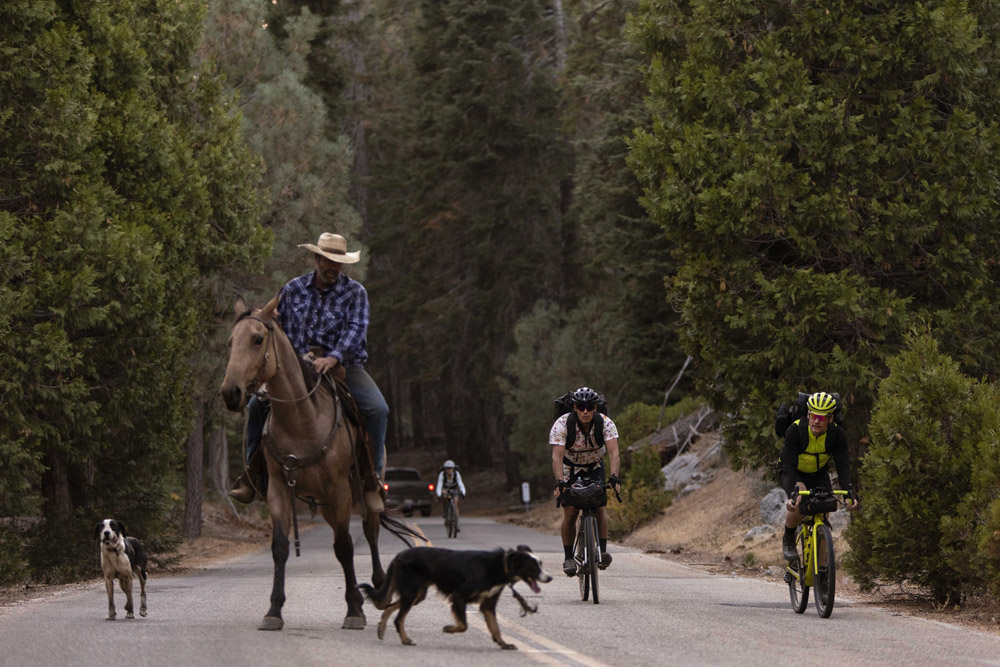 After the first night of camping out, the group assembles before the sun comes up for the second stage of the trip, which involves putting their bikes onto frames on their backs and hiking 30 miles. To those of us who think bikes are for riding, this is a strange concept but the rules state that no wheels may touch the ground on a National Park trail and the group conducts itself in this responsible manner. 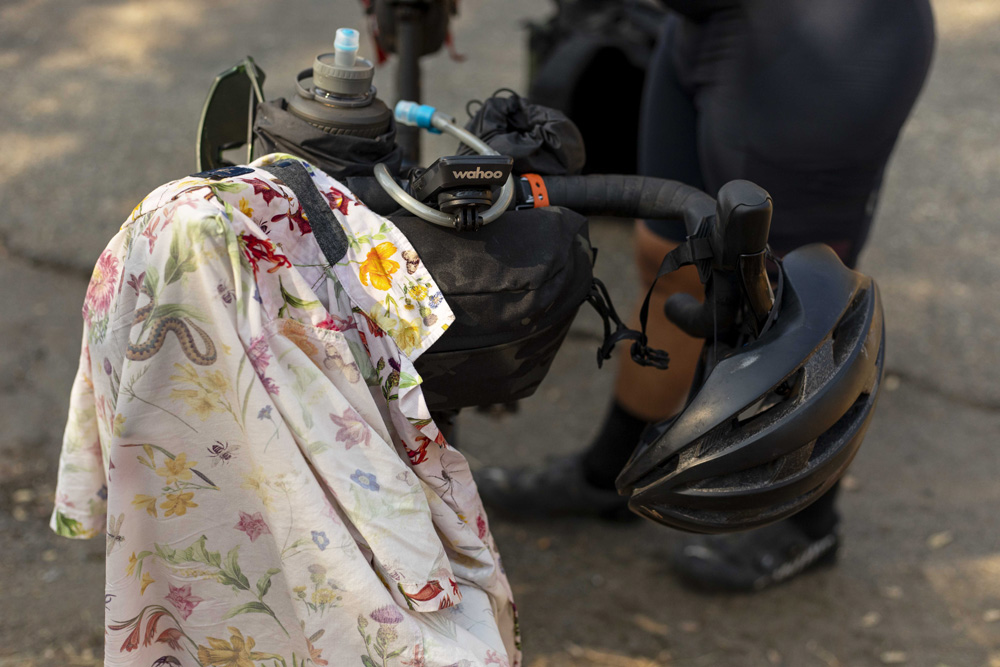 In the last segment, the group rides into an area of ancient and giant sequoia trees, the largest trees in the world, and which can live for 34 centuries. As the park’s website notes:

The giant sequoias’ red/orange bark is distinct among the grey and brown bark of other trees. And if you stand beneath one of these giants, you can gaze all the way up its tall trunk and through its high branches to see sky above. The treetop is often hidden above the highest branches. If you are quiet and listen, you may hear a breeze rustling the foliage of smaller trees – the sugar pines, white and red firs, or incense-cedar. Or perhaps you’ll hear a woodpecker calling and tapping against a tree, seeking insects. 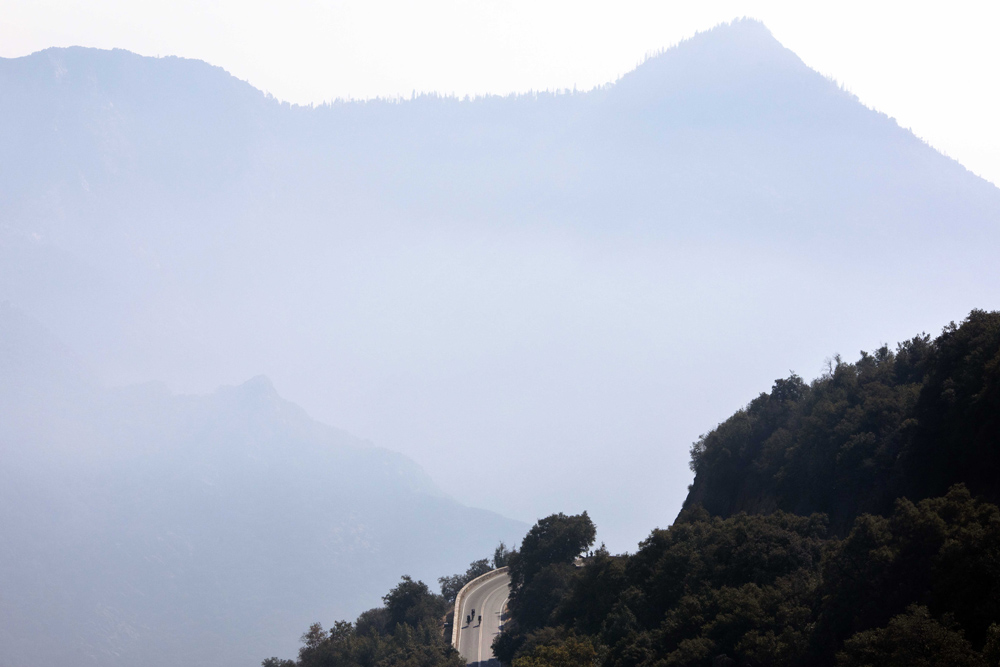 Not content with the potential sound of woodpeckers calling, the narrator treats us to “Ode to the Sequoia” in doggerel verse, a fitting accompaniment to the rustic setting and the light folkmusic played in the background of the film. 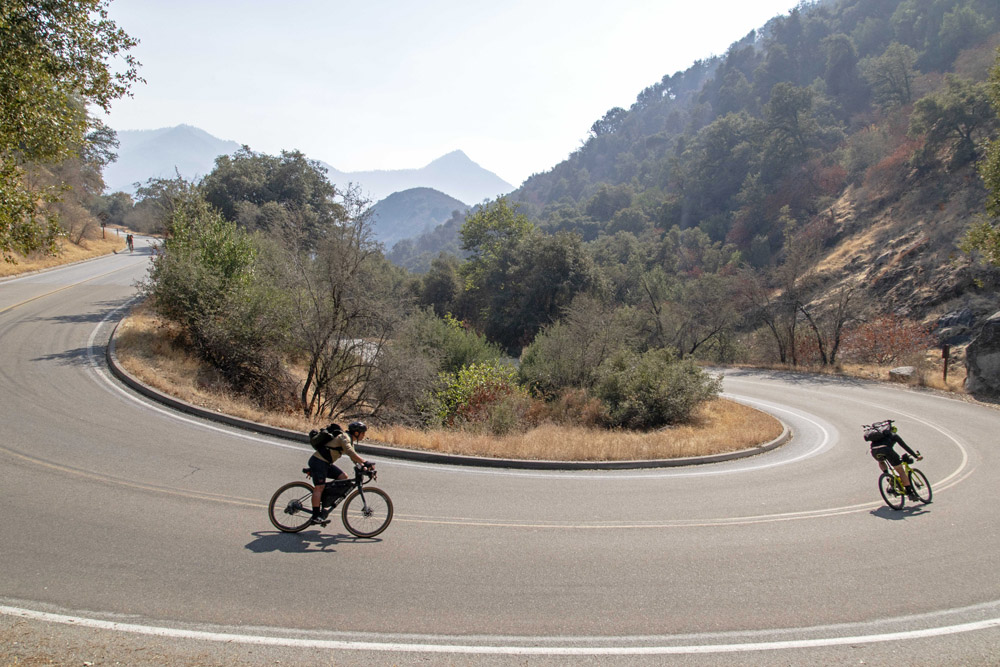 The group gets back onto asphalt for the final blast downhill, dropping 9,500 feet in 40 miles and with that their three day/two night excursion in the great landscape is over. Everyone is happy and laughing and Lael Wilcox expresses her enthusiasm about the idea of a hot shower, understandably. 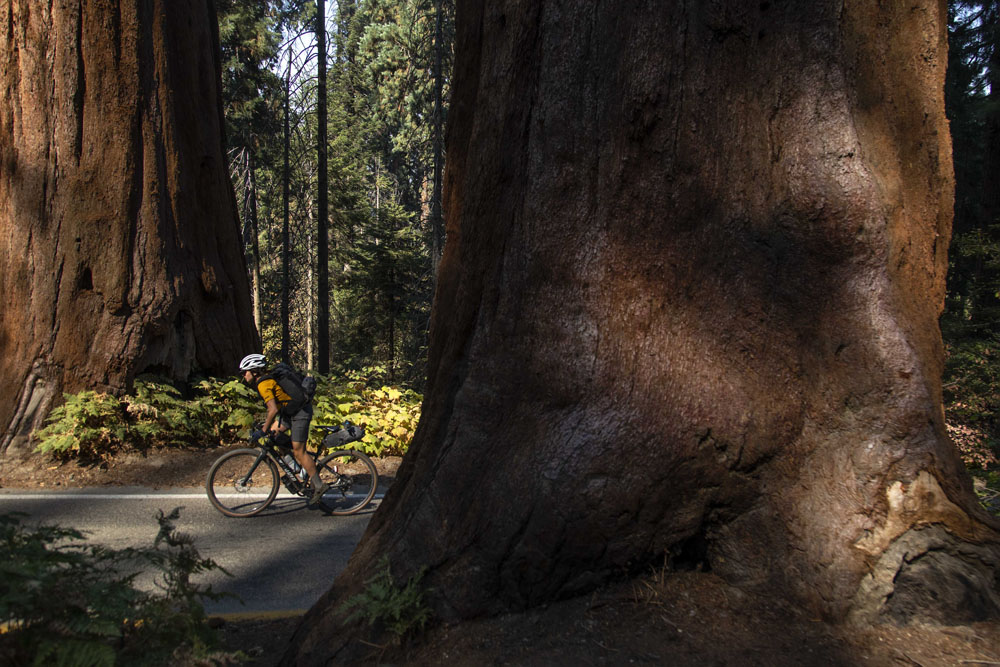 Adventure bikepacking has become A Big Thing in the diverse world of cycling. For those of us who never ride off-road and whose ideal weekend would see us riding all day between bakeries in Switzerland before retiring to a nice hotel with excellent food, films such as “The Long Way Around” provide a vicarious thrill, armchair enjoyment that may inspire others to make dreams a reality. 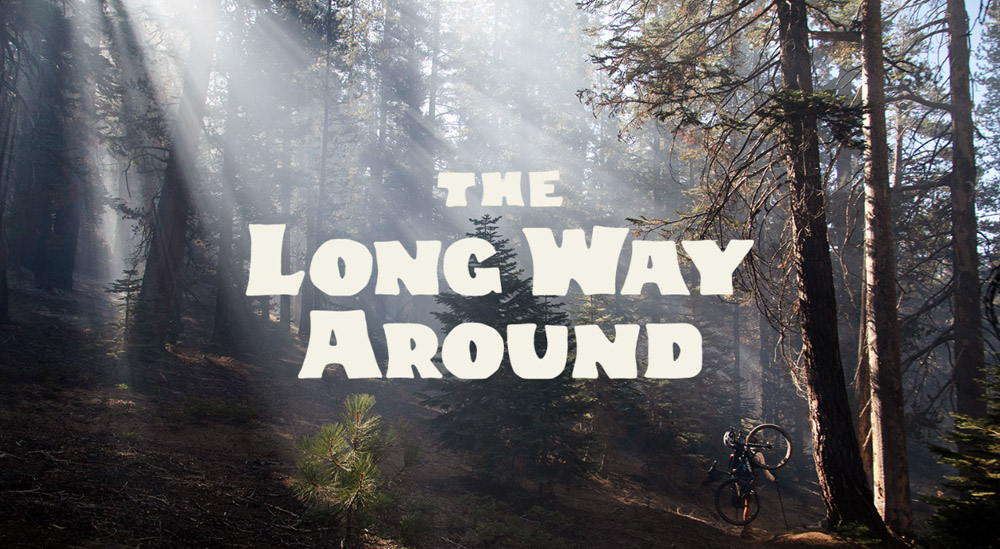 “The Long Way Around”–a film from Wahoo Fitness
January 2021, 14:25 minutes
You can see the full film on YouTube below: