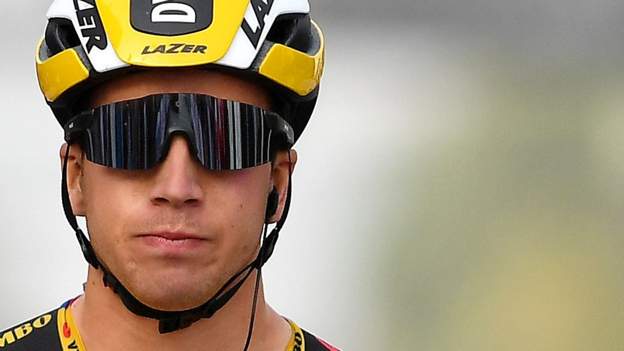 The 27-year-old Jumbo-Visma rider said police protected him and his family after the messages were mailed to him.

“[The] police guarded our door. We could no longer spontaneously leave the house,” Groenewegen said.

Fabio Jakobsen spent a week in intensive care after the crash at the Tour of Poland last August.

Jakobsen eventually returned to Holland and subsequently underwent several reconstructive surgeries to his face, and spoke about his recovery on social media.

“We received handwritten letters in the mail [in the days following the crash], which even included a noose that we could hang our little child on later,” Groenewegen told Dutch magazine Helden.

“When you read that message and see that piece of rope, you are shocked. That was the deciding factor for me that it could not continue like this.”

Groenewegen – who won on Paris’ Champs-Elysees in the Tour de France’s final stage in 2017 – apologised for the crash and was handed a nine-month ban by cycling’s world governing body, the UCI.

Groenewegen was penalised for swerving towards Jakobsen in the final metres of a sprint for the line, which saw Jakobsen crash through barriers and collide with a race organiser before hitting an exposed railway line.

“Of course [the threats] affect you. What sick world do we live in? The most crazy things go through your head. Getting out of bed in the morning was quite a challenge in that period.”

Groenewegen, who also had surgery for a broken collarbone after the crash, will compete again from 7 May when his ban ends.

The four-time Tour de France stage winner will undertake a low-profile race programme in 2021 – beginning with the Tour of Hungary – so he can “find my place in the peloton again and that I can enjoy racing again”, he added in a team statement.

“The impact of the crash is enormous.,” he said. “The chaos you find afterwards is terrible. It happened unconsciously and I feel very bad about that.”