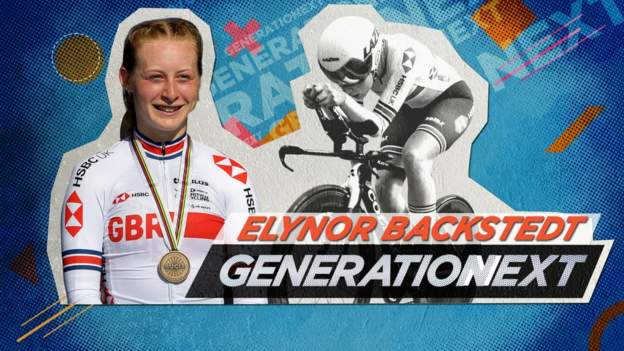 BBC Sport’s ‘Generation Next’ follows a group of inspirational young athletes, from a range of backgrounds and sports, as they bid to become our next sporting superstars.

Elynor Backstedt was just two when, perched on her grandfather’s shoulders, she watched her dad win Paris-Roubaix.

She didn’t know it at the time, but she was seeing history be made as Magnus Backstedt became the only Swedish cyclist to ever win the cobbled classic, nicknamed ‘the Hell of the North’.

What Magnus didn’t know at the time was that his little girl would become a cyclist herself, now a rising star on the women’s World Tour.

“I think she was probably about 15 when we realised that she really had something quite special,” he says. “There were signs that started to come through that she was very driven to pursue a career in cycling, and then starting to have flashes of brilliance on the bike and doing things that were a little bit exceptional.”

Now 19, Backstedt is a junior world championship medallist on both the road and track, and rides alongside the likes of Lizzie Deignan and Elisa Longo Borghini for Trek-Segafredo.

Her talents don’t come from just one side of her lineage though. Backstedt’s mum, Megan (nee Hughes), was a British road race champion who represented Wales at the 1998 Commonwealth Games.

Ask Backstedt who her sporting icons are and she reels off the names of some of her team-mates – “Lizzie, Ellen [van Dijk], Elisa…”. And then there’s a ‘but’.

“My parents to be quite honest with you,” she says. “I really look up to them.”

‘My surname pushes me on’

Despite her pedigree, Backstedt was “never, ever” pushed into the sport. She dabbled in a variety at school, but it was always going to be cycling in the end.

“It came so naturally to her and she just wanted to follow what we were doing,” says Megan.

Magnus, also a Tour de France stage winner, adds: “I didn’t want her riding bikes just because that’s what the family did. That was a major worry for me and still is to a certain extent, I want them to do this because they love doing it.”

There are no concerns there. Backstedt can pinpoint when she decided to make cycling her career – when she was just a young teenager, sidelined with a broken leg.

“When I came back from that I decided I wanted to start training a bit more and a bit more specifically,” she says. “I think then I decided ‘you know what, I’d really like to have this as a career’ and since then it has grown and grown as more of a passion and as something I wanted to do with my life.”

That broken leg was the first on a lengthy list of injuries and illnesses Backstedt has dealt with in her short career.

That list also reads two broken collar bones, concussion, whiplash, glandular fever, and a second broken leg – and yet her drive has not dwindled.

She describes herself as having a good combination of her mum and dad’s talents. From her mum, Backstedt says, she gets her sprinting ability, while she has the same riding style as her dad.

But what’s it like carrying a surname so well known in the sport?

“Sometimes it can be difficult,” she says. “I probably found it the hardest when I turned junior, when you try and attack and everyone knows who you are and what your parents have done, it’s quite hard because they tend to chase you down straight away.

“But I also feel like it’s helped me be more creative with my cycling and find new ways to do things because of the surname that you carry. It’s almost pushed me on a bit more.”

‘It’s the best time to be in women’s cycling’

A big drive for Backstedt and her younger sister Zoe, a talented cyclo-cross rider, is to grasp the opportunities their mother never had.

“I could never have had a career in cycling,” says Megan, who retired in 2001. “It’s a job for them now, whereas you had to have a job to do the cycling when I was racing.

“You couldn’t have survived, whereas you can now and I think it’s absolutely brilliant for them and it is progressing. It’s the right time for them to be making a career of it.”

Entering the second year of her contract with Trek-Segafredo, Backstedt says she is “lucky” to have signed for a team that “stands for equality”.

She has come into the sport at a time when things are, slowly, changing for the better for women. TV coverage is steadily growing, and as of 2020, women’s World Tour teams must pay their riders a minimum wage and they receive a host of benefits including sickness and maternity cover.

“When mum raced, she didn’t have this. She had to have a normal job as well, which is really quite sad and I really think that she could have gone so much further in the sport if she’d had the support that I’ve had today,” Backstedt says.

The year 2020 was also set to stage the inaugural women’s Paris-Roubaix, but it was postponed due to the coronavirus pandemic.

It has been rescheduled for April, though that may come too soon for Backstedt as she continues the return from her broken leg. Give it time though, and there may just be another Backstedt listed among the race’s winners.

“I definitely want to become world champion,” she says. “I’d love to become an Olympic gold medallist one day, win some of the classics and hopefully Paris-Roubaix.