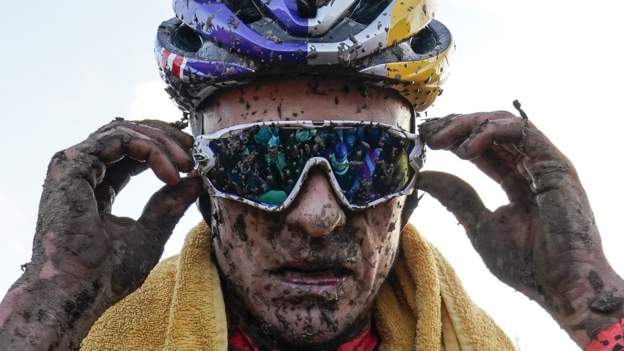 Tom Pidcock says he wants to become one of the “biggest guys in cycling” as he prepares to take on the world’s best at the World Cyclo-cross Championships.

The 21-year-old has spent the winter competing with two of cycling’s most exciting young talents in Mathieu van der Poel and Wout van Aert, and has a real chance to make is mark in Ostend, Belgium, on Sunday.

“I’d love to be the world road champion or win the Tour de France. But maybe it doesn’t have to be that specific – just be one of the biggest guys in cycling,” said Pidcock before Sunday’s race, which is live on the BBC iPlayer and BBC sport website.

In the women’s race on Saturday, Evie Richards will represent Britain after finishing sixth last year in Switzerland.

A cycling discipline which is very popular in Belgium and the Netherlands, cyclo-cross is mix of mountain biking and road cycling, with a little cross-country running thrown in for good measure.

Pidcock, who finished second last year in Dubendorf, Switzerland, says riders compete “on grass, sand, mud, downhill and uphill. You also get off your bike and run with it, up bridges and steps…”

“When you describe it like that it sounds weird, but it’s good to watch.”

Organisers from the UCI – cycling’s world governing body – gave the go-ahead for the event last week following a tightening of coronavirus restrictions.

In normal circumstances, thousands of locals and cycling fans converge to watch the action and enjoy the festival atmosphere, which often includes live music and beer tents.

For the riders it can be brutal – one hour of racing around a 3km lap which gets very muddy, slippery and dangerous as competitors are frequently forced to get off their bike and carry it across certain sections of terrain.

“I cut my nails this morning and there was mud in my toenails still,” said Pidcock. “So you certainly so find mud in weird places.

“My shoes get cleaned and then I bring them home and put them on the radiator, and hose down my kit because it’s really dirty and clonks up the washing machine – I have to wash it twice.”

In a discipline largely dominated by Dutch and Belgian riders, Malvern’s Richards has been a force across this winter at several cyclo-cross races, along with Anna Kay from Gateshead.

But Pidcock, from Leeds, has consistently threatened the dominance of two riders in particular who have been taking cycling by storm.

Van der Poel, the current cyclo-cross world champion after victory last year, is another who has won prestigious races in road cycling, including last year’s Tour of Flanders monument.

And Pidcock has been finishing just seconds behind the pair all winter as he prepares for his first season on cycling’s World Tour with Ineos Grenadiers.

In Belgium on Sunday he has a chance to claim the champion’s rainbow jersey and lay down a further marker for 2021.

“This winter gives me confidence I can race with these guys to the line.

“When I was young I wasn’t strong, but I was good at using my head to win races,” added Pidcock. “I was famous for wanting to dive-bomb into the last corner first. I was very competitive. Still am.”