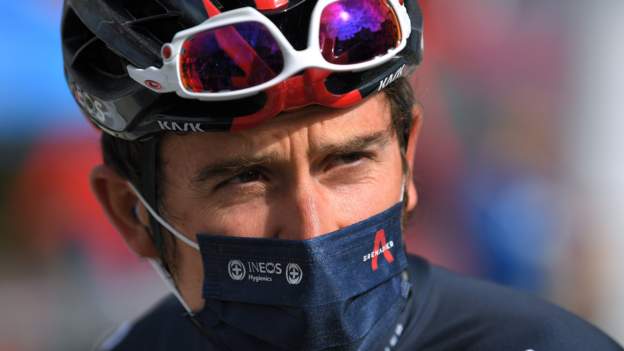 Brailsford wants the team to adapt to the more spontaneous style of racing that propelled Tao Geoghegan Hart to Giro d’Italia success in 2020.

Welshman Thomas, who won the Tour in 2018, will be supported by a strong team that includes Geoghegan Hart.

British team Ineos (formerly Team Sky) have won 10 Grand Tours since entering the sport in 2010. Their dominant style of racing has become known as the ‘Sky train’ – an apparently impenetrable line of riders whose metronomic tempo and scientific approach beat teams more focused on a traditional style of racing.

But Brailsford said his riders had “really enjoyed” the way they approached last year’s Giro.

‘The sport is changing and I feel very invigorated’

Last year, for the first time since 2014, Ineos failed in their main objective – to win the Tour. Defending champion Egan Bernal lost more than seven minutes to the leaders on stage 15, and eventually abandoned with a back injury.

After Thomas, 34, succumbed to injury at the Giro, the team took a less formulaic approach, and 25-year-old Briton Geoghegan Hart won his first Grand Tour.

“We’re not changing this year but continuing what we started last year – a more opportunistic and adaptable team,” said Brailsford.

“We need to adapt our style – take opportunities when they arise as a mindset.

“Having got a lot of victories, people did say it’s not great for sport: ‘Where’s the suspense? It’s too predictable and too dominant…’

“We’ve thought long and hard about it – is it Terminator or Zorro? Is it Germany or Brazil, dare I say? Maybe it’s preparing like Germany and playing like Brazil.”

Who’s racing where this year?

Ineos are showing faith in Thomas, who had a frustrating 2020 with injury and a loss of form, by backing him as the lead rider for this year’s Tour.

“This Tour is really suited to Geraint’s attributes and he is very, very motivated for it,” said Brailsford.

“Given the time-trialling, the nature of the climbing, the first week and the crosswinds… on paper it’s a great Tour for Geraint.”

Thomas will be supported by Geoghegan Hart, which means the Englishman will not defend the Giro title he won in October.

“In terms of his progression and development, it felt like actually riding the Tour was the next step, it was another new challenge,” said Brailsford.

“He was very, very motivated and very excited to go and race the Tour this year.”

It is not clear whether Geoghegan Hart would step up to lead were Thomas to suffer a loss of form or injury in the Tour, because Ecuadorian Richard Carapaz – who narrowly missed out on wining the Vuelta a Espana last year – will also feature in a strong line-up.

New signing Adam Yates, who left his twin brother Simon at Mitchelton-Scott to join Ineos, will focus on the Vuelta.

“He has come here to perform,” said Brailsford. “He hasn’t come here to develop. He wants to take a step up and we want to help him do that.”

Colombian Bernal, 24, will try to win the Giro.

“We thought long and hard,” said Brailsford. “Obviously he’s coming back from last season. We want to make sure he’s got that smile going into this Giro as well.

“I wouldn’t rule out Egan doubling up into the Tour, that’s very possible. But we’ll assess that one as we get closer.”