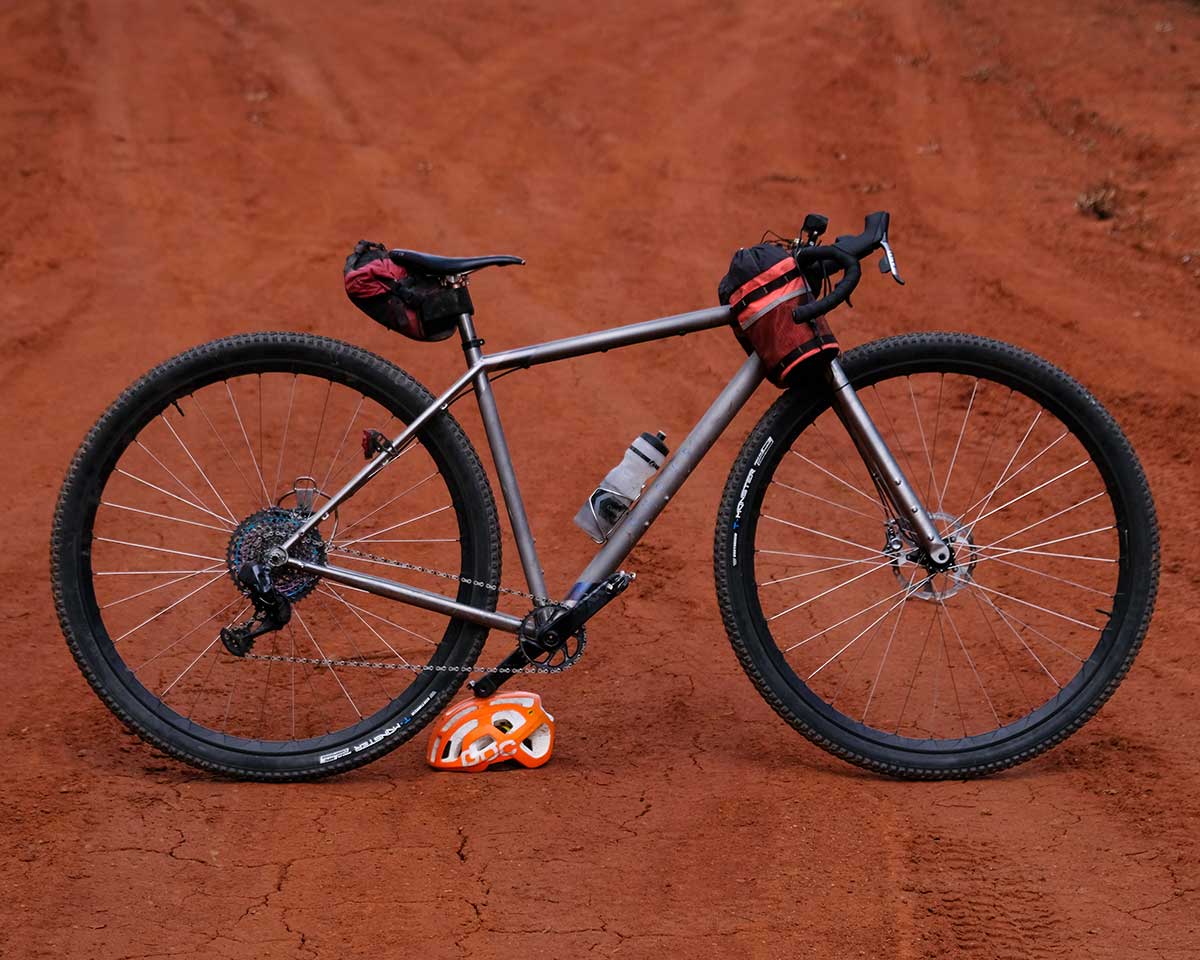 Curve Cycling have shown us the first glimpses of their prototype 36er gravel bike, the Titanosaur. Jesse Carlson, director of Curve, started looking into 36″ wheels after years of riding and racing in the Australian Outback, a landscape characterized by long, flat and remote stretches of dirt road with hundreds of kilometres between isolated outposts. Here’s what we know about this titanium 36″ wheel gravel grinder so far!

Australian Desert thoroughfares like the Plenty Highway, Ooodnadatta Track and Great Central Road were Jesse Carlson’s inspiration to produce a 36″ wheel gravel bike. “These roads are often heavily corrugated. Riding them at speed is a bone-jarring, tooth-rattling experience”, says Jesse.

After seeing videos of people riding up staircases on 36ers, Jesse couldn’t help but think the bigger wheel might roll more easily over the corrugations. The reduced angle of attack between the wheel and road surface promised a smoother ride, with the added benefits of faster rolling wheels, more comfort for the rider and less fatigue. Experimenting with a 36er was an obvious path for this Australian gravel bike designer.

Thus, the Curve Titanosaur was born. To be clear, the Titanosaur 36er is still in its prototyping phase, but here’s what we know about it so far…

The Titanosaur is a titanium frame weighing a claimed 2.4 kg with boost axle spacing. With rack mounts on the fork and stays, plus three bottle cage mounts on the front triangle, this 36er gravel bike is well setup for long bikepacking journeys. That said, with such a massive front wheel, space for a handlebar bag is limited.

Jesse says the Titanosaur descends with incredible stability at speed, especially over rough terrain. No surprise there; that particular benefit of large wheels is clear to mountain bikers when switching from 27.5″ wheels to 29er.

“We spent a lot of time working through the design considerations and chose a geometry that looks a little different to other 36ers on the market. It’s built around a very short stem, the super-wide Walmer drop bar, and the bottom-bracket drop, head tube angle and fork off-set have been carefully selected to make it ride like a 29er.”, says Jesse.

Curve are still developing the Titanosaur, a process that has been made difficult by the lack of 36″ wheel and tire availability. In particular, their testing has been limited to Vee Tire Co’s T-Monster, a wire bead 2.25″ unicycle tire weighing around 1,410g. Jesse suspects that a tire with a bit more volume, folding bead and good side-wall structural integrity would improve the ride feel hugely.

Jesse says that heavy rims and spokes also limit the potential of 36er bikes. That said, the carbon 36″ rim from Alchemist is said to offer a big improvement over the super heavy unicycle options.

Despite the teething issues associated with limited spec options, this should be a pretty exciting announcement for all the very tall bikepackers out there!

Ultimately, this 36er is only really going to be suitable for very tall riders in the 200cm+ range. While still in the prototyping phase, Curve do hope to release the Titanosaur into the wild soon. Assuming all goes well with ISO and Bender testing, the frame only and complete bike options could be available as early as January 2022.

Thule adds 2 new categories to get your best riding buddies to the trailhead & around town
Can Heat Training Slow You Down?
Prototype CeramicSpeed Aero OSPW derailleur upgrade gaining seconds at the Giro for Biniam Girmaye
Return of the Mongoose Hooligan – A 90s Classic BMX returns as a 29er
Bikerumor Pic Of The Day: Namib Desert, Southern Africa