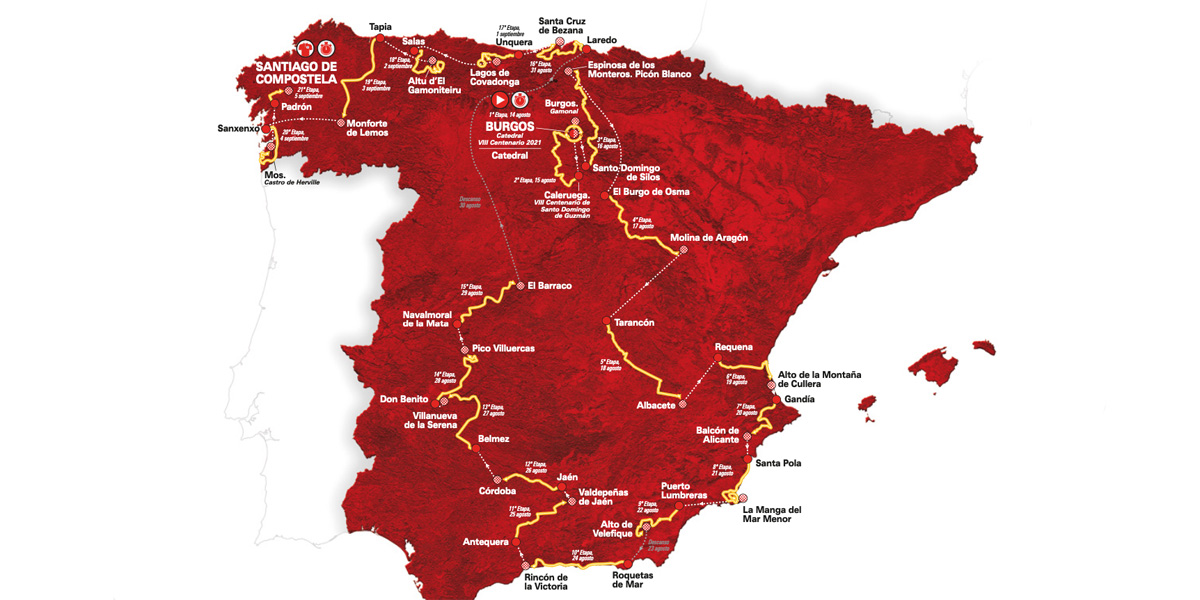 Today, the Burgos Evolution Forum hosted the official presentation of the route of La Vuelta 21. The event, marked by sanitary safety measures, limited capacities and distancing among the attendees, presented the ‘La Vuelta de las Catedrales’. The Spanish grand tour’s 76th edition will take off in front of the Burgos Cathedral on the 14th of August and will take place entirely within Spanish territory up until the very last stage, that will conclude in the Santiago Cathedral on the 5th of September.

On Thursday the 11th of February, Unipublic revealed the route of La Vuelta 21, that will take place from the 14th of August to the 5th of September. The first eight kilometres, out of the total 3336.1 km that make up the race, will be an urban individual time trial within the city of Burgos. The route will revolve around its cathedral, the locality’s most emblematic monument, which celebrates the 8th centenary of its construction in 2021. The two following stages will be held within the Province of Burgos, with a finale in the district of La Gamonal and another at Picón Blanco, the first unprecedented high-altitude finale of La Vuelta 21. 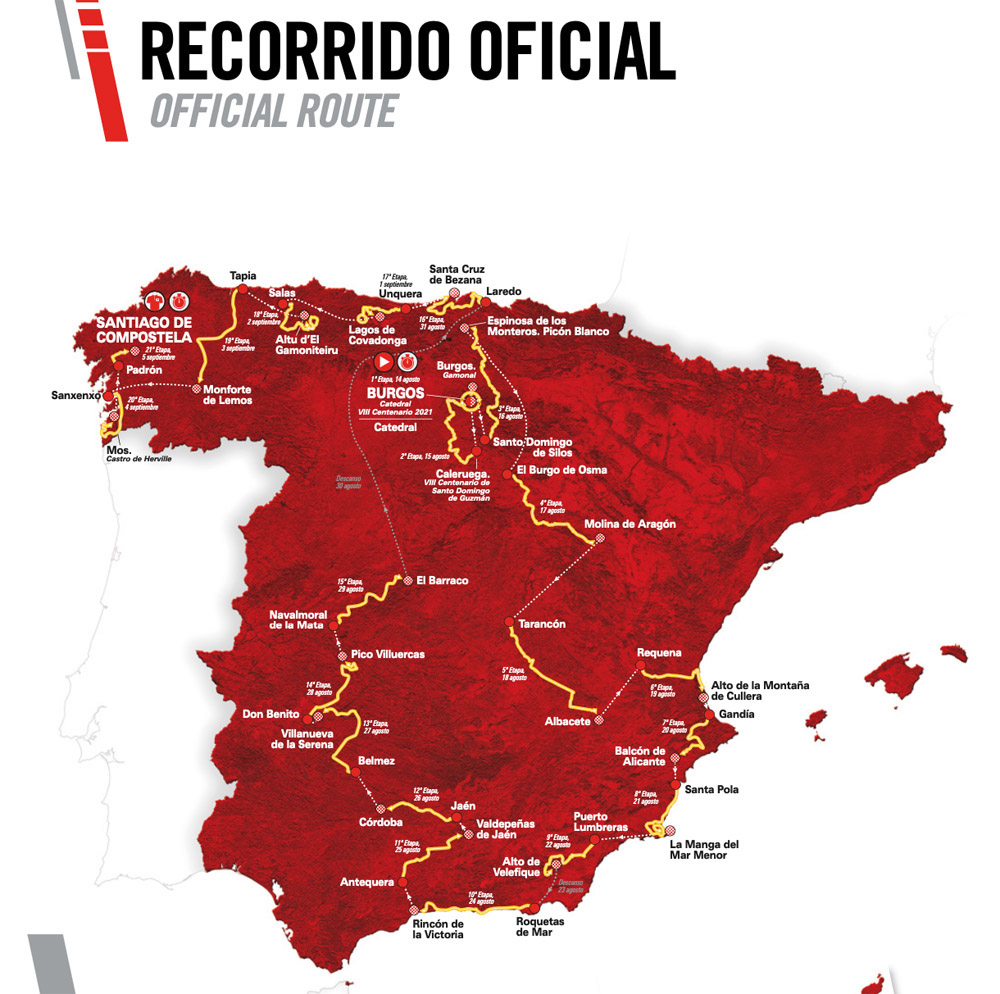 The peloton will travel towards the peninsula’s East, with stops in the provinces of Soria, Guadalajara, Cuenca, Albacete, Valencia and Alicante – The latter leading to the discovery of a new climb: the Balcón de Alicante. Heading further South, La Vuelta will hold a finish-line in the Region of Murcia, marking the end of the first week of competing at the renowned Alto de Velefique, in Almería.

Following the first rest day, the race will resume at Roquetas de Mar and will slowly travel through the Andalusian territory. The provinces of Málaga, Jaén and Córdoba will watch the peloton ride past before returning to Extremadura for the first time since 2013. The provinces of Badajoz and Cáceres will host two departures and two finish-lines in 2021. Pico Villuercas is an extremely tough unprecedented La Vuelta climb that stands out for its spectacular nature. Just before the next rest day, Avila will mark the end of the second week with a finish-line at the historic town of El Barraco, the birthplace of some of the best Spanish cyclists in history.

The riders will recover their strength before the final stretch of the race that promises to thrill spectators. Cantabria will hold a stage entirely within the autonomous community, before giving way to the Lagos de Covadonga climb. The Principality of Asturias seeks to become the judge of La Vuelta 21, by linking the mythical climb with a stage that will face a brand-new mountain pass expected to go down in history: the Altu d’El Gamoniteiru. Galicia will resume the race with a finish-line in Monforte de Lemos and a stage held entirely within the Province of Pontevedra that will delight Classics specialists.

A Coruña, not Madrid, will be the province chosen to host the final stage of La Vuelta 21. Taking into account the Jacobean year, and the fact that the 2021 edition is “La Vuelta de las Catedrales”, the organisation has prepared a final time trial with a finale in Santiago de Compostela and a departure from Padrón. This will ring a bell with 90s cycling fans as a very similar stage took place in La Vuelta 1993, which was the deciding factor behind Tony Rominger’s victory. 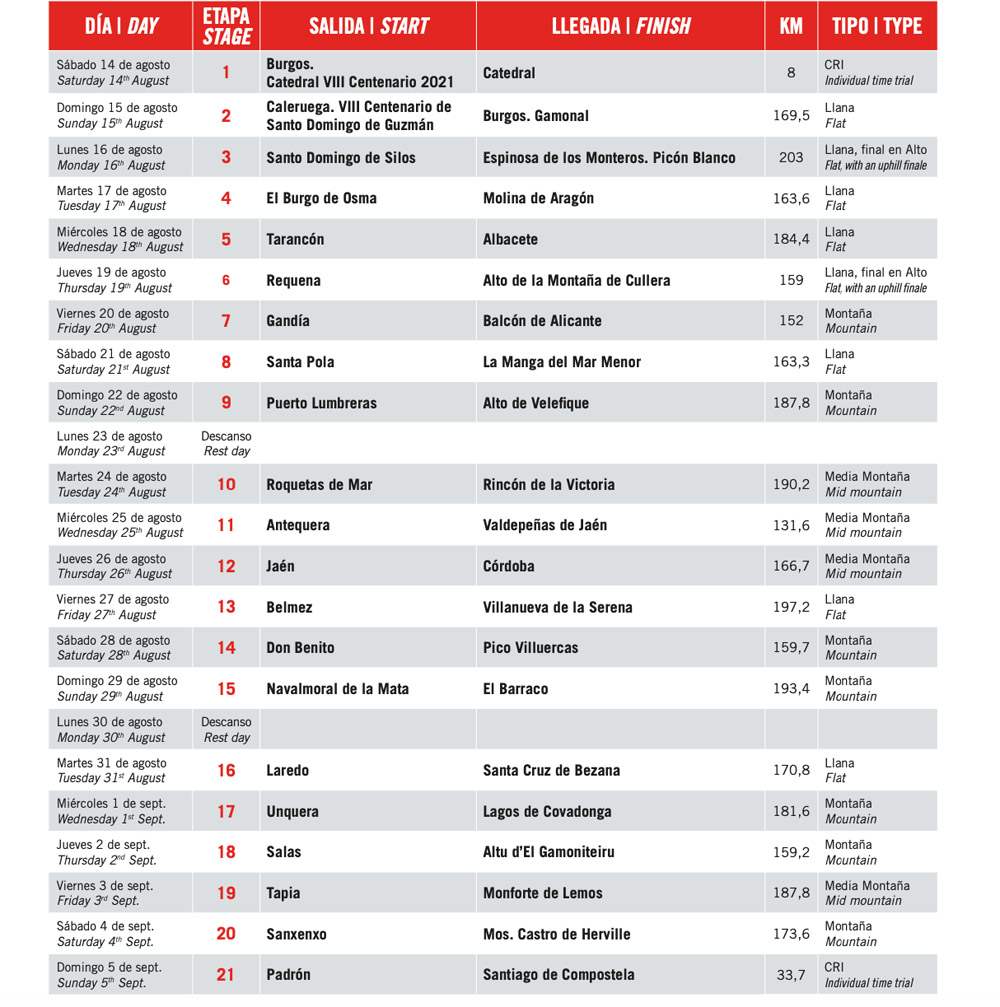 A VUELTA ENTIRELY WITHIN SPAIN

“The world is going through a very tough time right now, and this is being particularly felt in our country. For this reason, we wished to design a different kind of race. It is an ambitious Vuelta, that will cover many kilometres, but will stay only within Spain. We want to showcase our country: its beauty and its potential as a tourism world leader. We will be present in many territories, with a huge variety of terrains and unprecedented locations, while also visiting some of the country’s largest tourist centres. This is our way of entertaining people and of promoting tourism as we await a gradual return to normality”, expressed Javier Guillén, General Director of La Vuelta.

Although the route’s presentation is a major event that brought together 1200 attendees in 2020, this time around security has been put first, ahead of the usual festivities that would normally take place. With an assistance equivalent to 15% of the capacity of the Burgos Evolution Forum, the use of face masks was compulsory, and the recommended interpersonal safety distance of 2 metres was respected between each and every person in attendance. 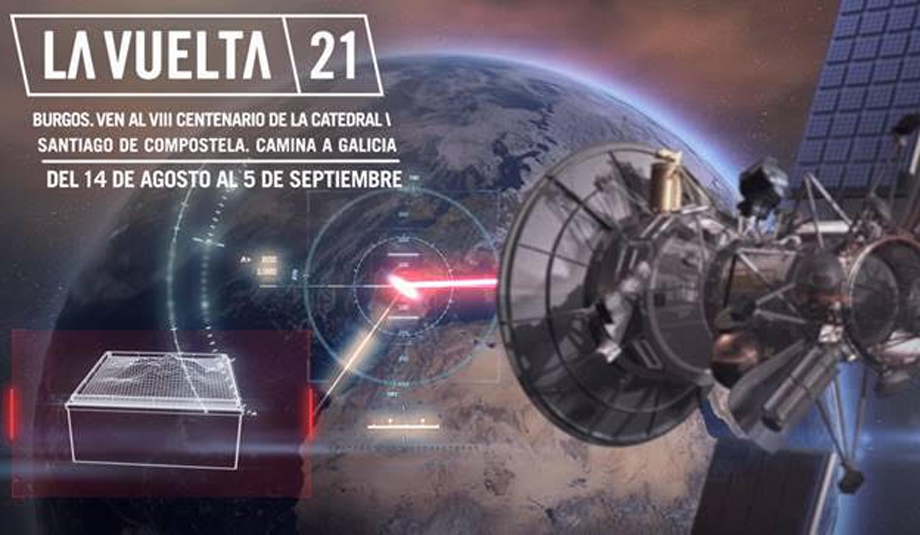