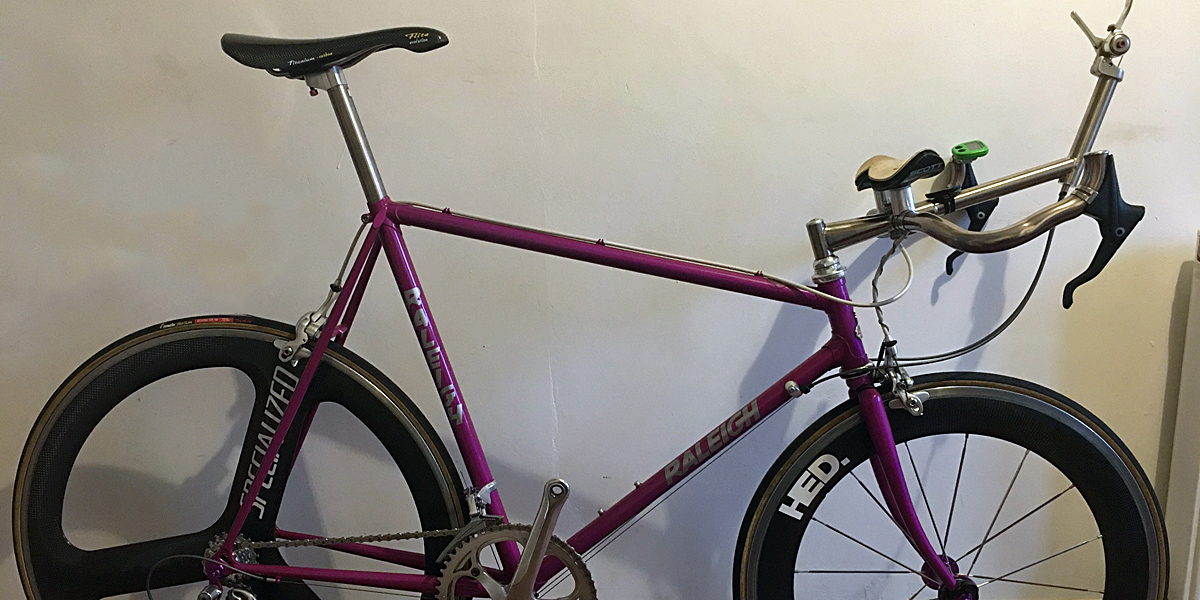 Readers’ Rig: With the UCI banning aero positions at the moment, it’s very nice to look back at a time trial machine from the 80’s. Neville’s TT machine is a classic of its time and doesn’t need any UCI approval as it ‘was last used in anger in 1999’. This is a real Raleigh low-pro classic. 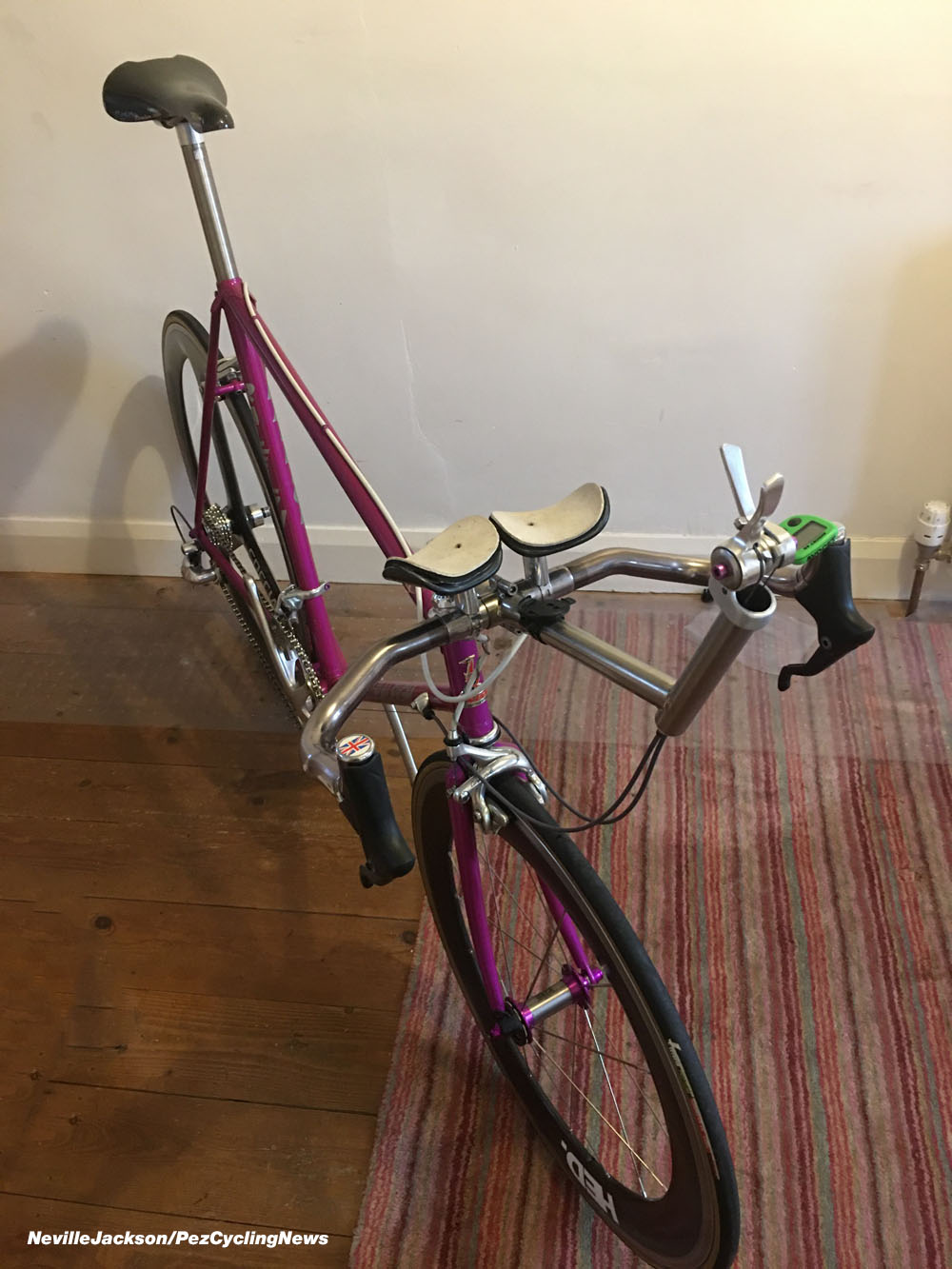 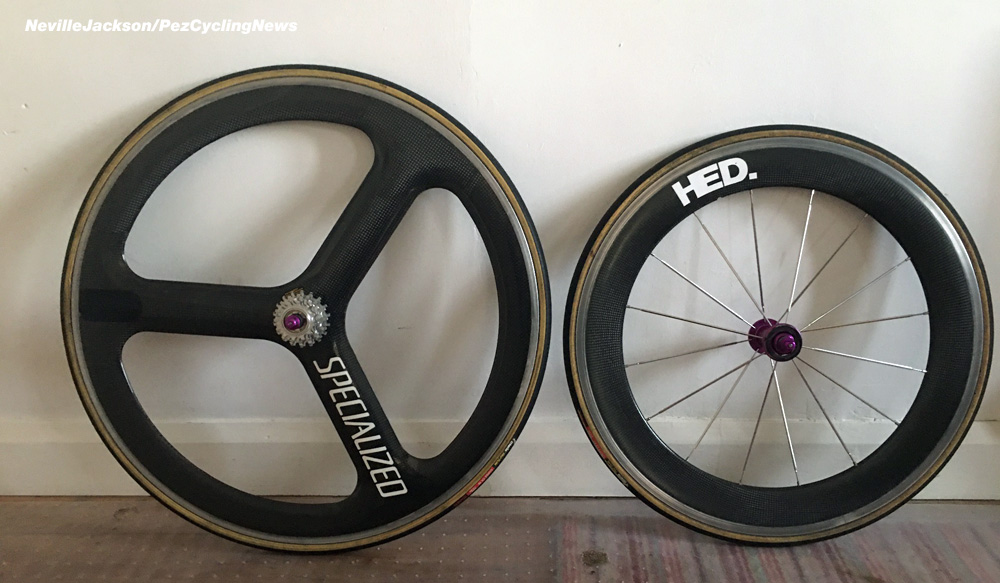 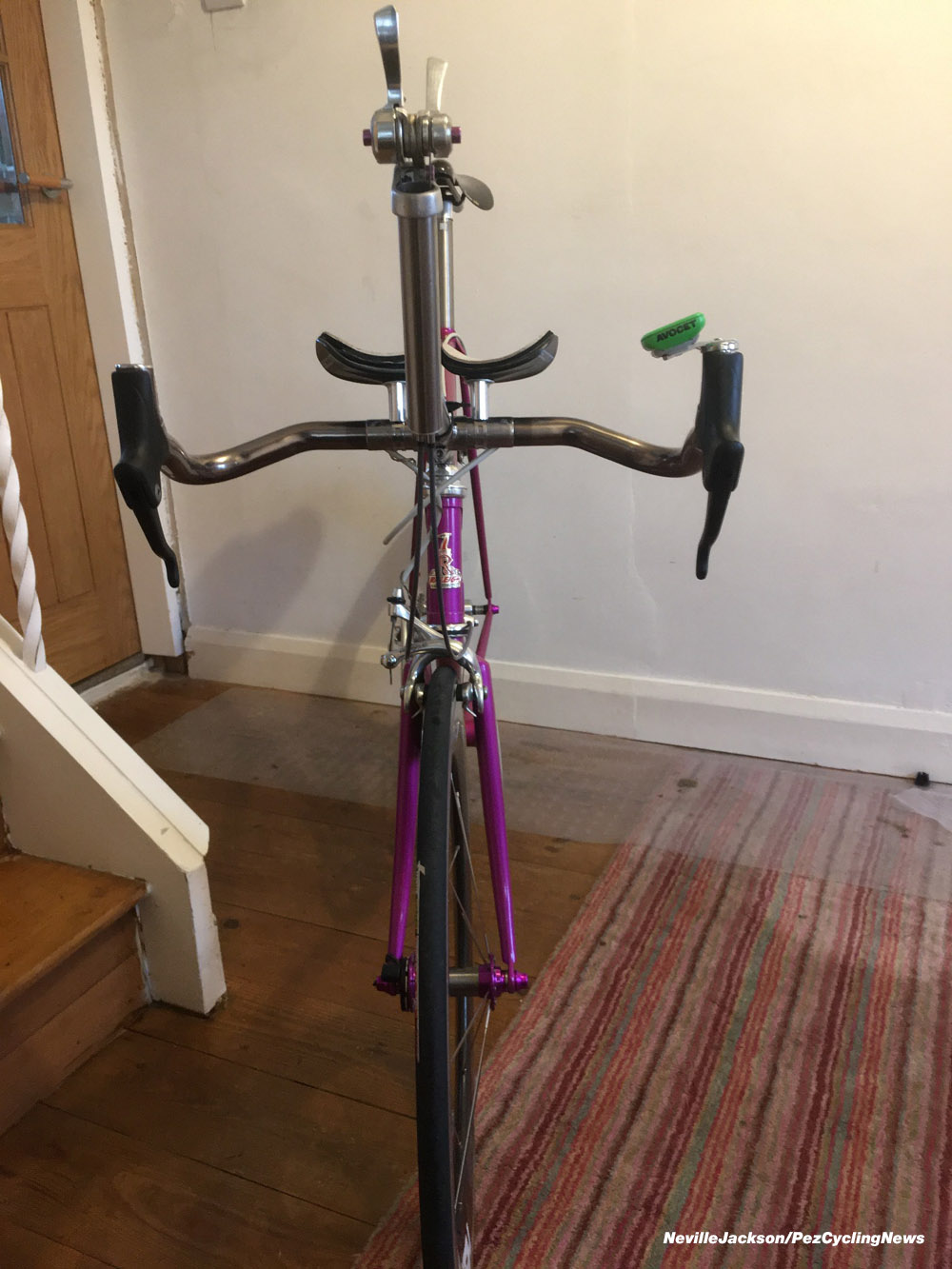 What made you choose this bike?
I had a Raleigh Ilkeston road bike (531 Professional tubing) at the time and was very impressed with it, so when I decided to buy a time trial specific bike it had to be another SBDU machine. They led the way with ‘funny bike’ design and for my size requirements a 24” front wheel made sense. 753 tubing was the best available and there were to be no compromises with this bike. 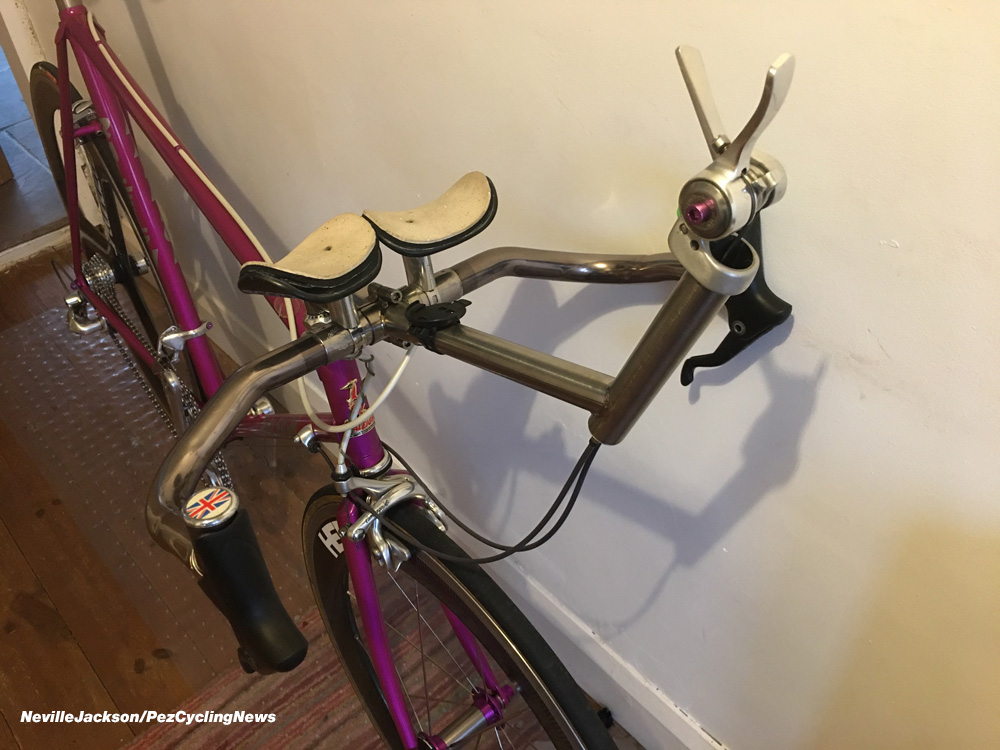 Have you done any modifications/additions to it?
I put the bike together from parts and it went through several iterations before settling as the machine in the photographs. Originally the bike was built pre aero bars and had upturned and sawn off Cinelli road bars. It also had ‘conventional’ spoked wheels consisting of C-Record hubs (threaded rear, pre-cassette days) and Araya hard anodised 18mm rims (still have them!!). Started out with aero Gran Compe brakes, but I rode a lot of ‘sporting course’ TTs, where brakes were important and they were just not good enough. Also had Deltas (which contrary to modern mythology were very good brakes), but decided they were too heavy. The dual pivot C-Records were fitted as soon as they were available. I went through various pedals (Dura Ace Look, Time Titan Magnesium, Diadora Powerdrive 150) prior to settling on the Speedplays in 1993 (I think!). I actually still have those very pedals on one of my road bikes and they are still on the original bearings. A brilliant product. I also made the bar end mounting bracket for the Avocet computer (pre GPS days). 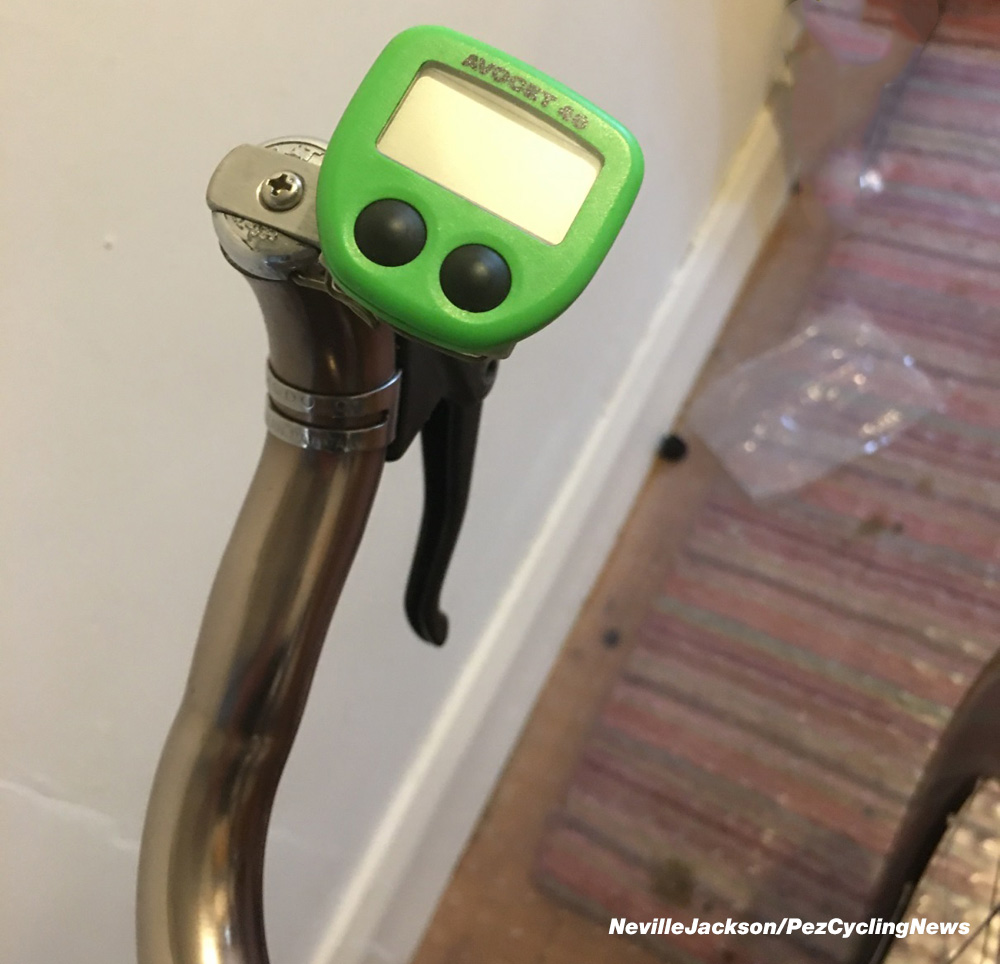 How many miles/kilometres do you do a year?
On this bike now, zero!! In its heyday it was (obviously) a competition only machine and I would estimate that total mileage covered in its entire life (about 12 years of competition as it was last used in anger in 1999) is in the order of 10,000 miles maximum (possibly significantly less). 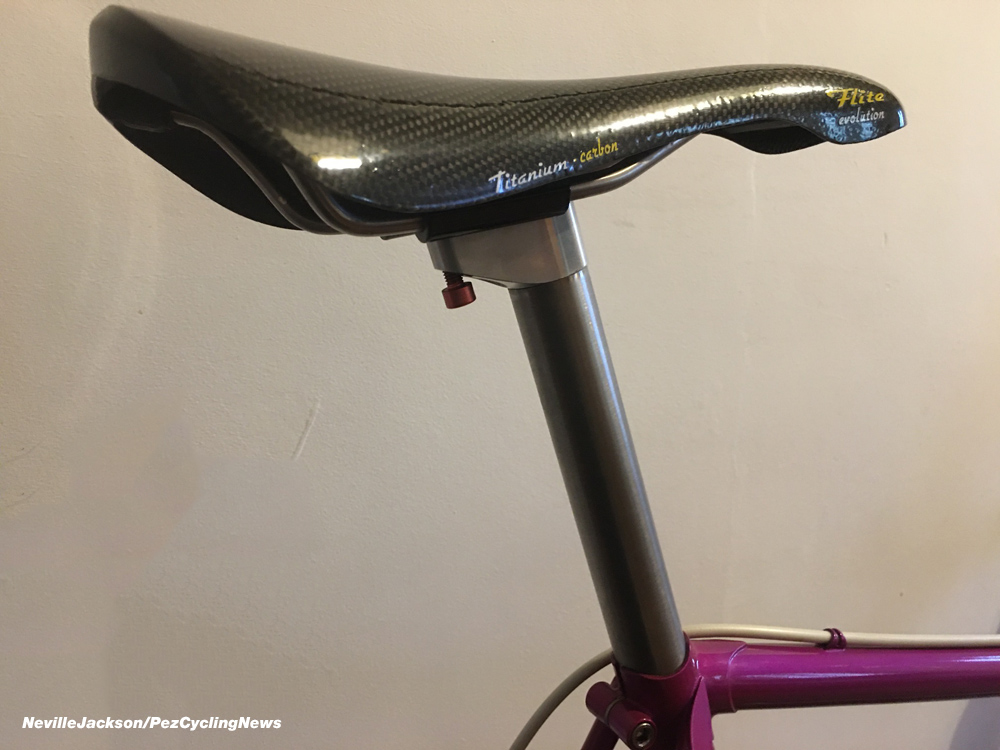 What do you love about this bike?
She was like part of me when racing. Handled beautifully, everything worked superbly, always did as asked and she was part of my youth. It’s hard to describe, but I would think lots of cyclists know exactly what I mean. My favourite component is probably the combined stem and aero bar. I started heading in this direction when I decided that two aero extensions were one too many and dumped one of them, setting the remaining one to run in line with the stem by (carefully) modifying it with a pipe bender!! I then happened to see the torque titanium set-up in a triathlon magazine, so ordered myself one. I made the gear lever mount from a mountain bike lever clamp. 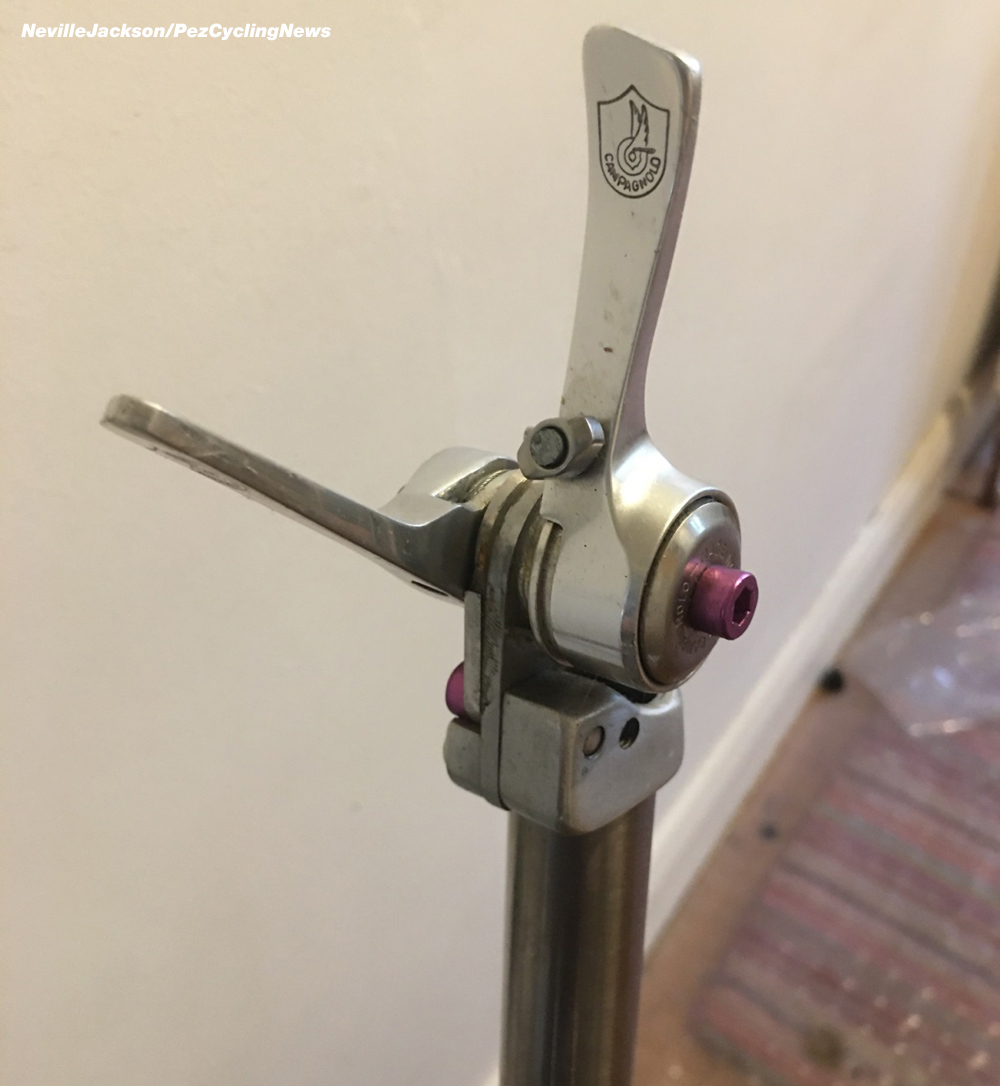 Favourite riding areas?
(With reference to this bike) Any of the hilly time trials I used to ride. The tougher, the better. 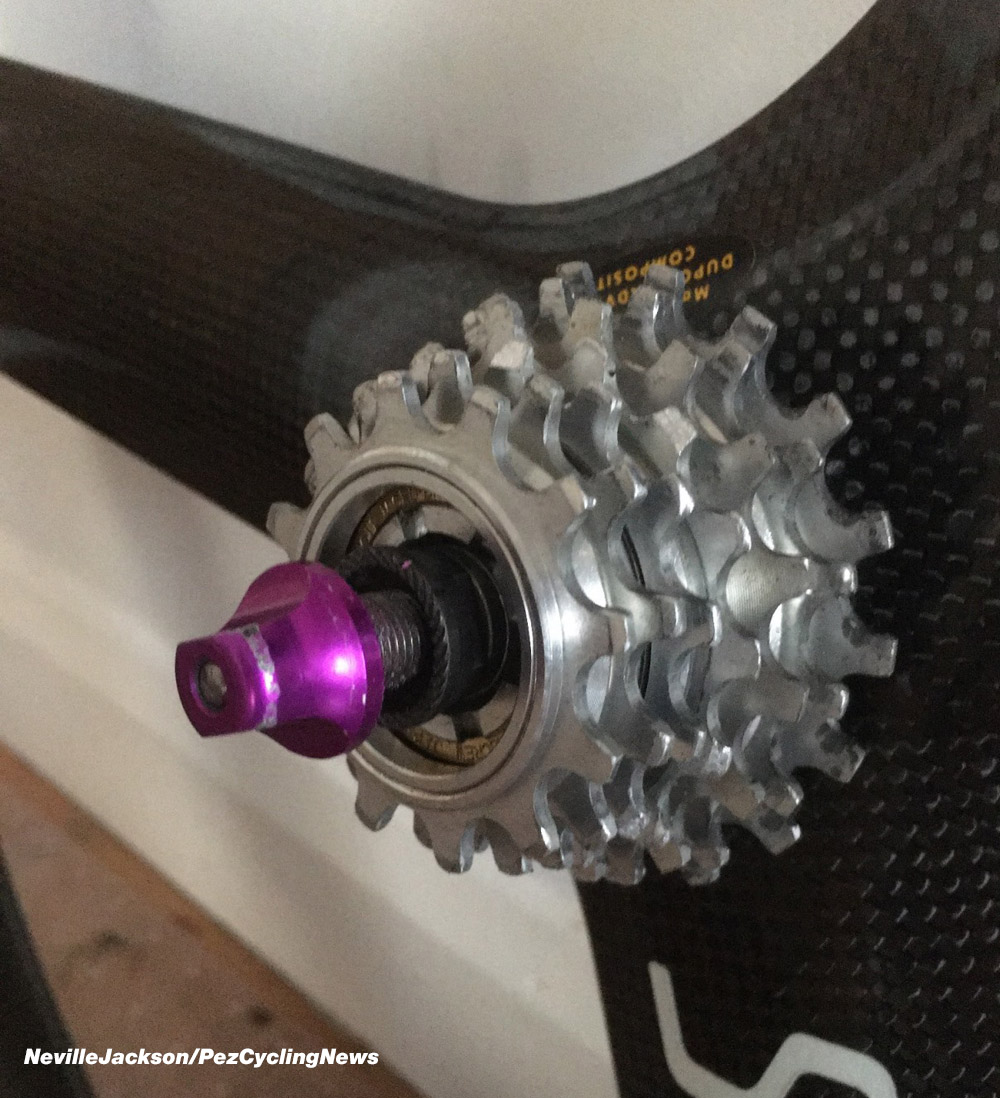 Top riding experience on your bike?
Difficult to select one, but possibly setting a course record that stood for many years in a ‘sporting’ 25 mile event local to me and also beating a British Olympic rider in a local 50 mile time trial. 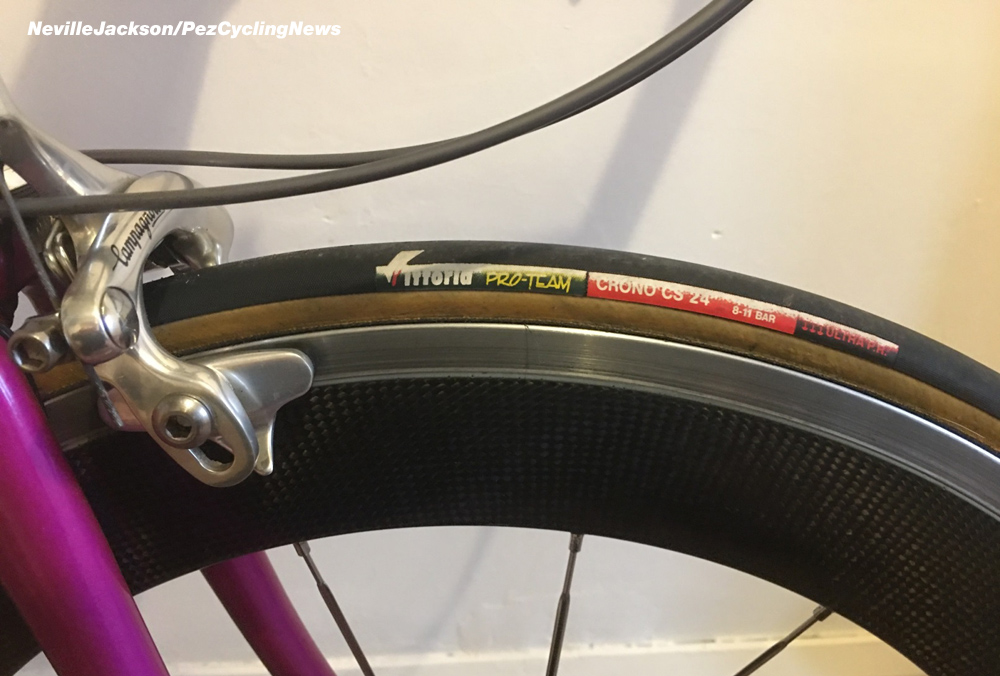 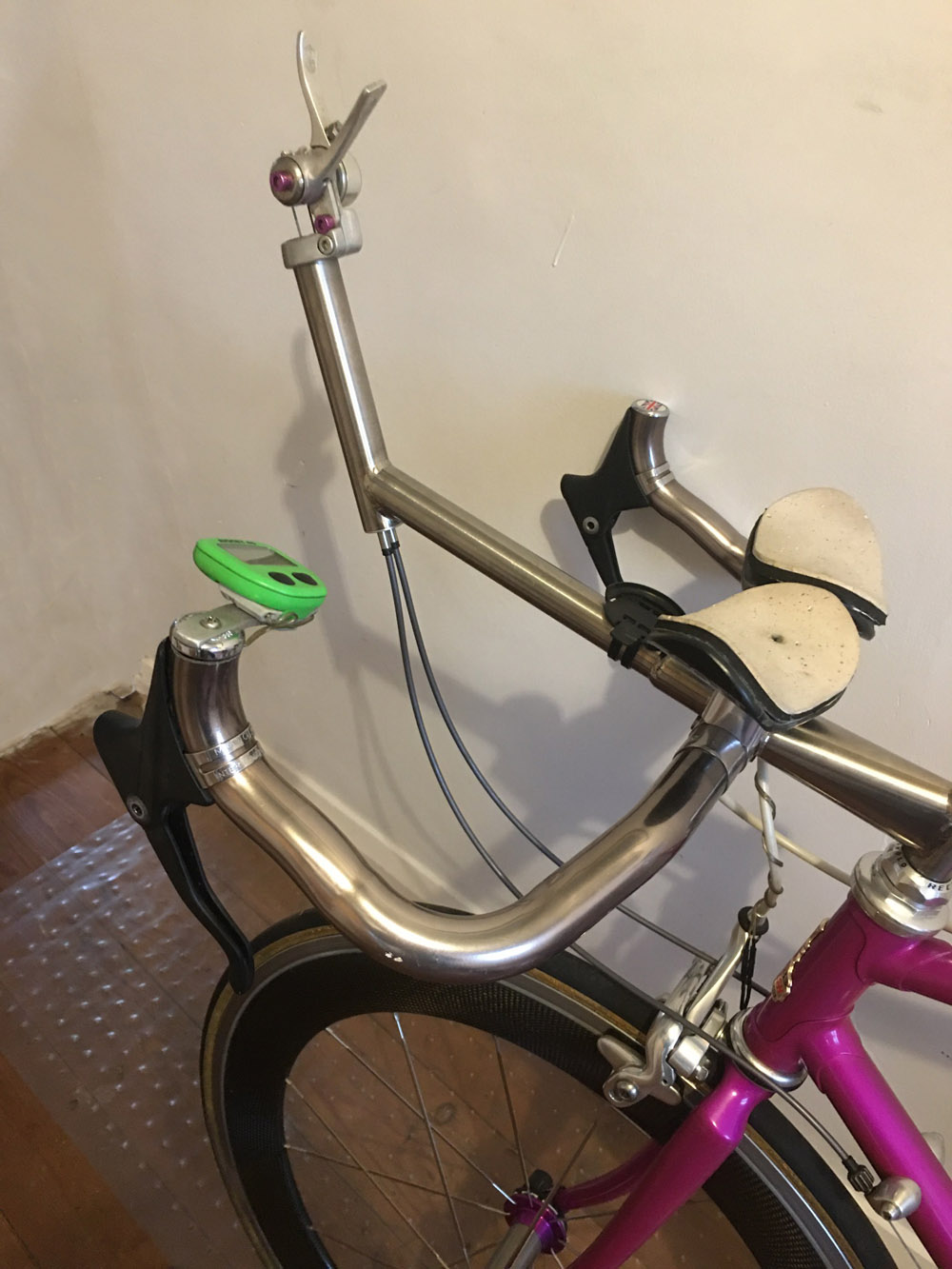 Last words:
I still ride at the age of 56 and still love cycling, but I look back at my competitive days and wonder how I did it. I was far from the greatest mile muncher, but it amazes me how much work I was able to put in attempting to be the best I could be, whilst holding down a job. Lord only knows how the folks at the top, doing twice as much as me, managed. This bike was central to my zest for life and love of the sport. I have often said to my nearest and dearest (only half jokingly!) that I want the bike buried with me – perhaps it will happen!! This is a great sport we are all part of and a great way of life. Cycling and the discipline required to train taught me so much and gave me so many happy times. Here’s to us all. Enjoy your cycling, do it for the love of it. It is much more civilised way to get around than sitting in a metal box. 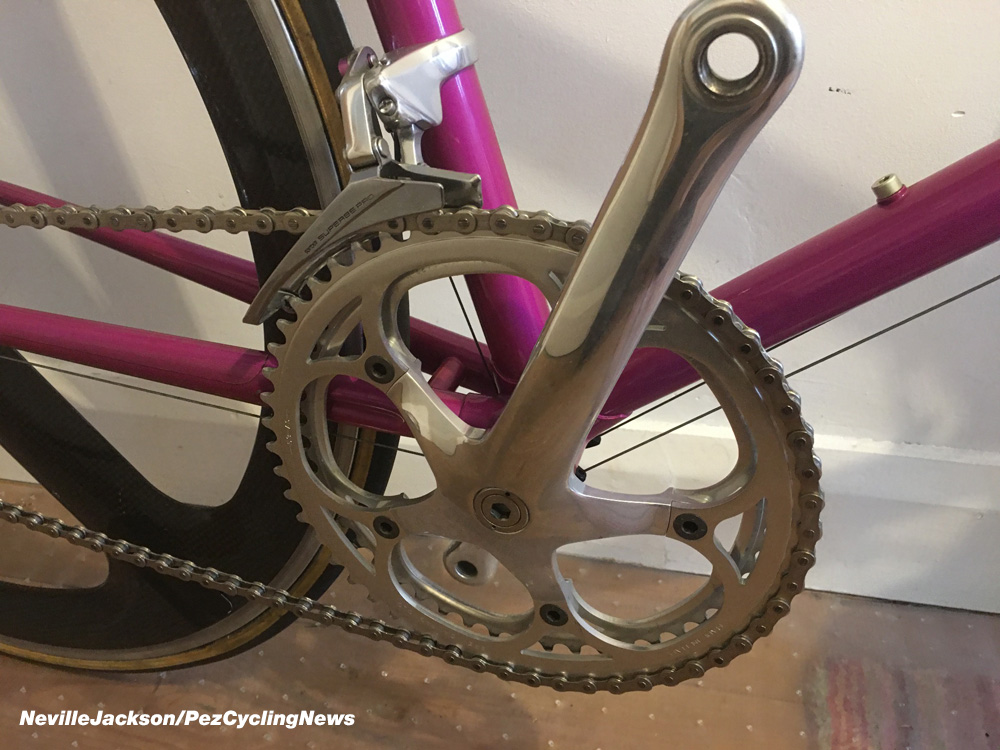 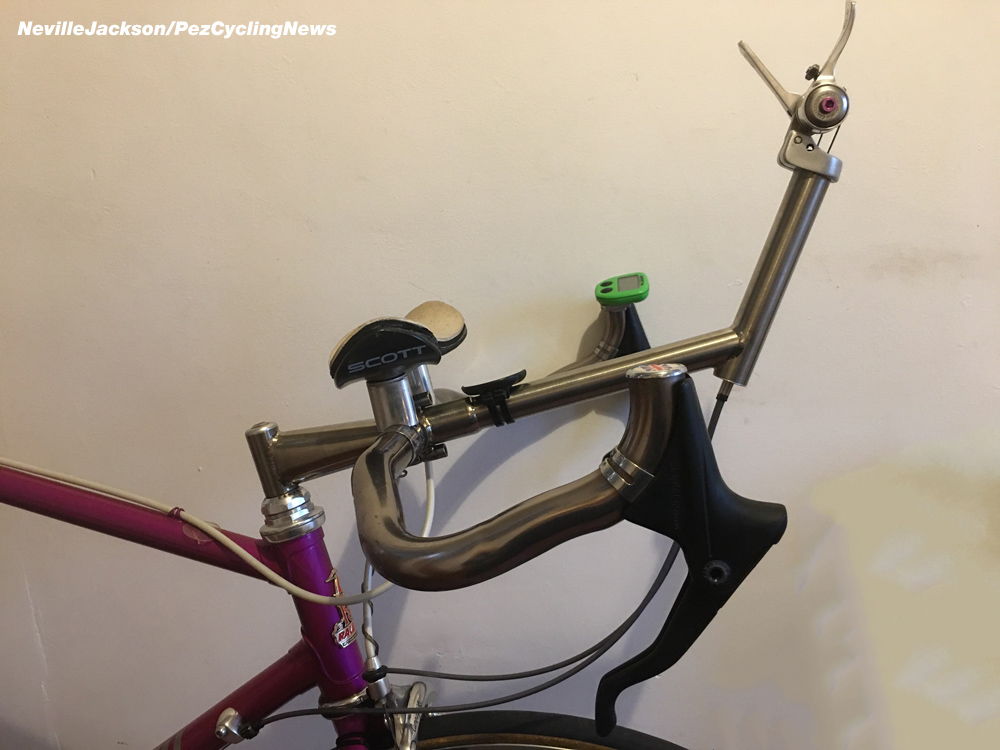 Thanks to Neville for sharing his ride with us. Got a bike that you just love to stare at? Well, how about sharing it with fellow PEZ fans and getting it featured in Readers’ Rigs so we can all stare at it! Send us a Readers’ Rigs submission direct to [email protected] and your bike could be featured in all its glory here on the pages of PEZ.