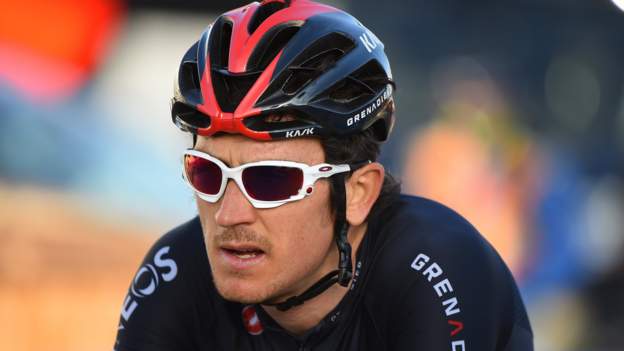 Geraint Thomas says he is ready to show he can still win cycling’s biggest events as he targets both the Tour de France and Olympic Games this summer.

The Welshman had a disappointing season last year which ended with him crashing out of the Giro d’Italia.

But the 34-year-old will lead the Ineos Grenadiers at this summer’s Tour de France and wants to prove he still has a “few more years” racing at the highest level.

“I’m super motivated for a big year,” he told BBC Sport Wales, as he prepares for his second race of the season at the Tour des Alpes Maritimes et du Var in France.

“It feels like last year was just about to get going but then I crashed out the race and it was over.

“Then even in 2019, I was second at the Tour but in the lead up to that there were downs more than ups with crashes or illness.

“It just doesn’t feel like I’ve raced consistently for ages, since 2018.”

2018 was the year Thomas won the Tour de France. Since then the next two victors – Colombian Egan Bernal and Slovenia’s Tadej Pogacar – were both under 23 when they wore the yellow jersey in Paris.

After Thomas crashed out of last autumn’s Giro d’Italia – falling and fracturing his hip after hitting a loose water bottle – the race was won by his 25-year-old team-mate Tao Geoghegan Hart.

But Thomas – who turns 35 in May – is not ready to hand over to cycling’s next generation yet.

“You see that in football every day with football managers – they’re the greatest thing one year, then it’s ‘get Klopp out’ two months later.

“It does give me a bit of a point to prove but it’s nothing I dwell on. I definitely don’t think I’m slowing down and I’m certainly still hungry for it.”

The departure of seven-time Grand Tour winner Chris Froome and the arrival of talented 21-year-old Tom Pidcock suggests a changing of the guard at the Ineos Grenadiers this season.

But Thomas remains an integral part of the team, with boss Sir Dave Brailsford recently backing him to lead the team at this summer’s Tour de France and revealing negotiations had begun to extend Thomas’ contract.

“The team really feels like it’s changed, in a good way, with some new riders,” Thomas says “It feels like everyone is as motivated as ever.

“When you have a year when it doesn’t go perfectly, it can go one of two ways. You either continue that downward spiral and the team loses its way or it rejuvenates everyone and spurs everyone on. It certainly feels that’s the way this team has gone.

“I want to continue racing as much as possible – and with this team for sure.”

The fractured hip he suffered at the Giro kept Thomas off the bike for six weeks. Just two weeks after returning to training in December, he dislocated his shoulder on a training ride.

But since January he says his training in the south of France has gone well. The only negative being the “double whammy” of Brexit and Covid preventing his wife and 16-month-old son from joining him out there.

Thomas says he is determined to get the most out of any enforced time away from his family and will line up alongside Giro winner Geoghegan Hart and Pidcock at the three-day Tour des Alpes Maritimes et du Var on Friday.

Another step on the road to a busy summer.

Just days after the Tour de France, the postponed Tokyo Olympic Games will begin. Thomas – a double Olympic champion on the track – hopes to represent Team GB again in the road race and time trial.

After a forgettable 2020, the Welshman is hoping 2021 will be a year to remember.