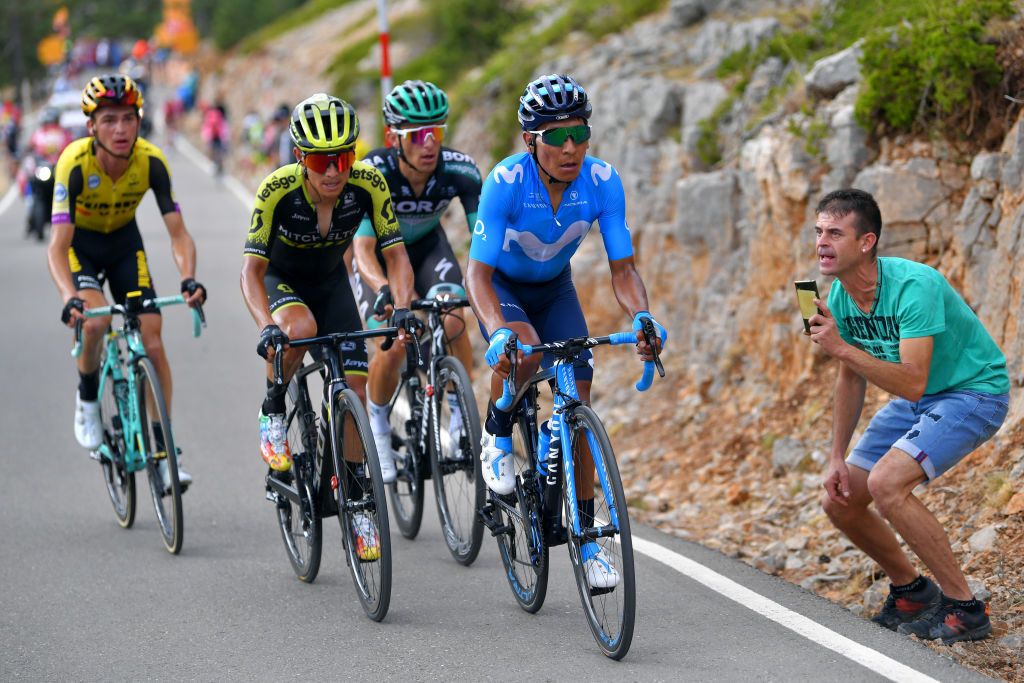 The confusion surrounding Movistar‘s leadership hierarchy in the Vuelta a España appears to have been laid to rest after Nairo Quintana told Spanish media that teammate Alejandro Valverde is heading the squad’s bid to win the race for a second time in four years.

Both Quintana and Valverde have triumphed in the Vuelta in the past, the Colombian in 2016, two years after taking the Giro d’Italia, and Valverde back in 2009.

Initially it appeared that Quintana would be Movistar’s main GC challenger after Valverde told the AS newspaper last Monday that “Nairo is more leader than I am,” and Quintana then won stage 2 of the race into Calpe from a six-rider breakaway.

However, in the same interview Valverde did not rule himself out of the GC battle, and said that he was taking things on the day-by-day.

And Quintana, whilst clearly with options for the overall victory – something he discussed in his winner’s press conference on Sunday – has now said that team manager Eusebio Unzué has made it clear that Valverde is the leader.

“We had a meeting and Eusebio said that. Alejandro is going very well, and we are going to support him,” Quintana said after stage six.

Quintana will, apparently, have a free role, and his GC options are by no means discarded either. As he put it, “I’ll be free to do what I want and I will see what I can do.”

The Colombian’s declarations come after he fell behind Valverde when the Spaniard attacked on the Alto de Javalambre, taking Primož Roglič (Jumbo-Visma) and Miguel Ángel López (Astana Pro Team) with him.

For his part, Valverde has attempted to play down any sense of a power struggle between himself and Quintana, arguing after stage six that “people invent problems between us and there is not even one percent of that, we know what happens inside the team bus.”

Last year, throughout the Vuelta, Movistar was troubled by an interminable debate in the media and a seeming lack of clarity on the road as to whether Valverde or Quintana was the stronger of the two.

In this year’s Tour de France, where the waters were muddied even further by a three-way split in GC ambitions between Valverde, Quintana and Mikel Landa, it was a similar story.

Friday’s difficult stage finish at Mas de la Costa could see a further clarification of the GC issue in Movistar.

Whilst there was little GC action in the 2016 Vuelta when the race tackled the brutally steep climb, the 2017 Volta a la Comunitat Valenciana saw Nairo Quintana take an impressive solo victory, managing to put 40 seconds of daylight between himself and his closest rival. Roglič was amongst those defeated, crossing the line in fifth place nearly a minute back.