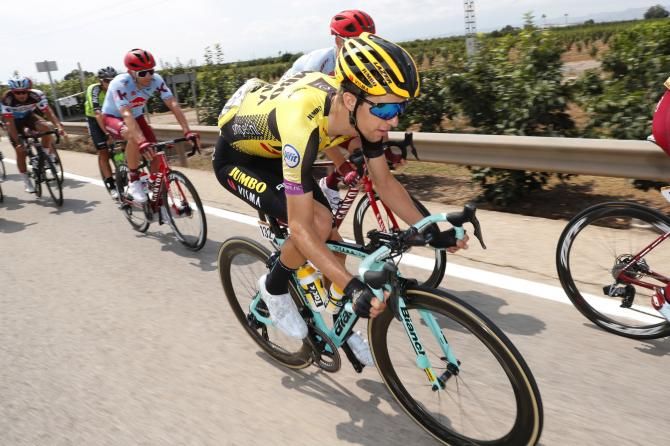 The Jumbo-Visma rider was one of three from his team who went down, including Tony Martin and American Neilson Powless – both of whom had already crashed in the stage 1 team time trial.

That crash on Saturday saw Steven Kruijswijk finally abandon on stage 4 with an injured knee, whilst after the stage 6 pile-up Bennett, like Powless and Martin, could continue to race.

“I’m not sure if it was someone from EF who went down first or if it was Tony [Martin],” Bennett told reporters when asked what caused the crash. “It was real nasty. I don’t feel too good after it, but I feel a lot better than the guys in hospital.

“That’s part of racing – crashing. It was all going all right with [Primoz] Roglic’s results, but we keep hitting the deck, and that’s not good.”

Bennett pulled no punches when explaining that if you are well enough to continue at a WorldTour race, the only option is to go on.

“What can you do?” he asked. “If you crash, you can’t really sulk in a [WorldTour] race. You just got to get on with it, because no one gives a shit if you crash. You’ve got to keep going,” he said.

“It’s unfortunate that Tony, Neilson and I all went down, and I’ll maybe talk to the doctor. I know the other two are all good. We’ll have a look and hopefully in a few days’ time we can forget about today.”

The crash itself continues what has been an exceptionally hectic, unpredictable and fraught start to the Vuelta a España this year.

Yet both on stage 5’s and stage 6’s summit finishes, although there has been a GC battle, the struggle for the lead has yet to truly develop. That’s something that Bennett, for one, attributes to the riders’ keen awareness of just how difficult the second half of the Vuelta will be.

“There would have been a time bonus for [overall contender Miguel Angel] Lopez on stage 5,” Bennett pointed out – if Lopez’s Astana team had worked for the stage win rather than letting the break stay away.

“But we don’t really care who’s winning at the moment,” he said. “As strange as it sounds, we’re more interested in the second and third week – that’s when you won’t see it like this.”

Weeks two and three of the Vuelta feature a brutally difficult series of climbs in northern Spain, and then at the end of the third week there’s another major mountain showdown around Madrid.

“We’ve all seen the road book. It’s been a hard start, but we don’t want to commit guys because we all know what’s coming.”