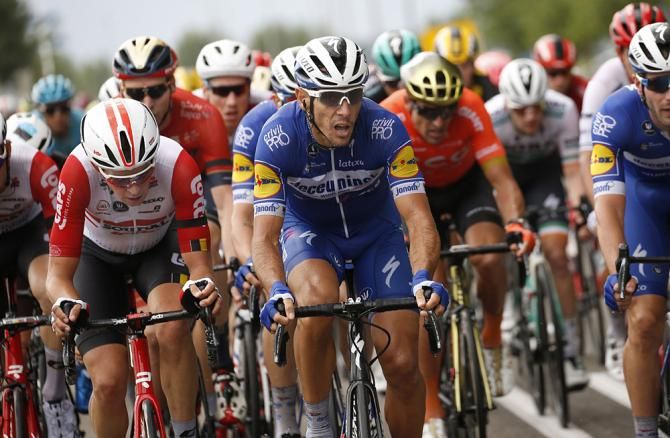 When it comes to betting on the UCI Road World Championships Road Race in September, one rider who already has worn the rainbow jersey, Belgium’s  Phillipe Gilbert (Deceunink-QuickStep), is surely an option that the bookies will have high on their list of possible winners.

But in this year’s Vuelta a España, so far, Gilbert has been flying a little bit under the radar.

Deceuninck-Quick Step came within a whisker of victory in the opening team time trial – and only lost through no fault of their own – and then have taken a bunch sprint stage win with Fabio Jakobsen.

Meanwhile, Gilbert is biding his time for further down the line.

“It’s too bad we missed the TTT you know, it would have changed a lot of things,” the 37-year-old told Cyclingnews at the start of stage 6 Thursday in Mora del Rubielos. Then we had the first sprint [on stage 3] and we missed that, but we won the second, so it was nice. For the climbs we know we don’t have the best team, but we will do our best.”

As for his personal ambitions, Gilbert said he will try to win a stage, but he said there aren’t many that suit him.

“Everyone says I have seven chances, but that’s easy to say from a distance. They haven’t really looked at the stage profiles,” he said. “For example, today looks like a small uphill finish uphill, but in fact it is eight kilometres of climbing.

“For me, when it’s steep but not too steep, that’s my favourite finish – one kilometre or 1.5 kms at 7 or 8 percent. When it’s more than that you’ll likely find someone better than me.”

Gilbert’s options in the Vuelta a España, he says, are largely reduced to just one real chance, stage 19’s short-but-punchy uphill finish near the city centre of Toledo, which includes some chunks of pave.

As chance would have it, Gilbert won in the same city in 2010, blasting away in the final kilometre, but on a different finishing parcours.

Quite apart from the attractions of Toledo, Gilbert is aiming to go through all the way to the finish of the Vuelta this year.

“I’ve not been racing so much, and I need competition. For the Worlds it’s always nice when to finish the Vuelta. After that you do one or two big training sessions and it’s the best preparation.”

It’s been a while since Gilbert shone in the Vuelta, which he last rode in 2016, but he has five stages there in his palmares, the most recent in 2013. He also led it in 2010 for five days.

However, some of those Vuelta stage wins have been spectacular, like in 2012, the year Gilbert won the Worlds, when he first outsmarted Joaquim Rodriguez in a two-way duel on home soil in Montjuic Park for one stage win at the end of the first week, and then despatched Alejandro Valverde (Movistar) on stage 19 for a second.

As for the world championshps in 2019, Gilbert recognises that its hilly course could be favourable for him, but he believes he will find out enough about what this year’s route entails much close to the time. For now, he’s got enough information.

“I just know a little about it. I know that it’s quite hard, and it has a lot of up and downs, which is good for my characteristics. But I don’t know any more,” he said.

“It’s always the same – everyone goes beforehand to check out the course. But in the end, the Worlds is what it is – and the weather this year could be a big factor, too.”

As for the rest of his last few months in Deceuninck-QuickStep colours, Gilbert will not stop until October.

“I want to go all the way through to Lombardia,” says the two-time winner of Giro di Lombardia. “Unfortunately, they’ve made it really tough with all those climbs at the end. I wish the route was more like when I won it.”

But, like the Worlds, Gilbert will take Lombardia as it comes, and meanwhile he continues steadily to build his form in the Vuelta a España and wait for his chance in Toledo in the third week. If a chance comes up before then, however, so much the better.