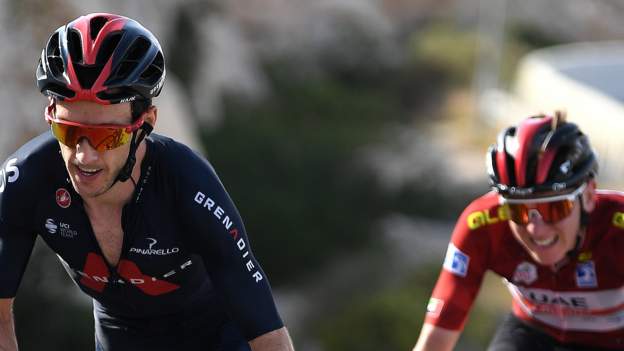 Britain’s Adam Yates was second to Tadej Pogacar in the third stage of the UAE Tour following an intense battle up the final mountain.

Red jersey wearer Pogacar took victory after he launched himself past Yates about 300 metres before the line.

Yates, 28, in his debut race for Ineos Grenadiers, had powerfully led Pogacar up to Jebel Hafeet, leaving the remaining field behind.

Yates is now second overall, 43 seconds behind Pogacar, with four stages to go.

He took the lead of the race after Tuesday’s time trial when winner of stage 1 Mathieu van der Poel left the race after a staff member of his Alpecin-Fenix team tested positive for coronavirus.

“It was kind of stressful because there was a small chance of echelons, but all I had to do is respond to attacks,” said Pogacar.

Four-time Tour de France winner Froome was five minutes behind the leaders on the 166km stage from Al Ain up to the uncategorised climb to Jebel Hafeet – he now sits 44th, 14 minutes 53 seconds down.

Froome has said he is still recovering his form since suffering multiple fractures in a crash during the 2019 Criterium du Dauphine, his return then delayed further by the coronavirus pandemic.

Wednesday’s 204km stage to Al Marjan Island will be a chance for the sprinters to battle for a stage win.