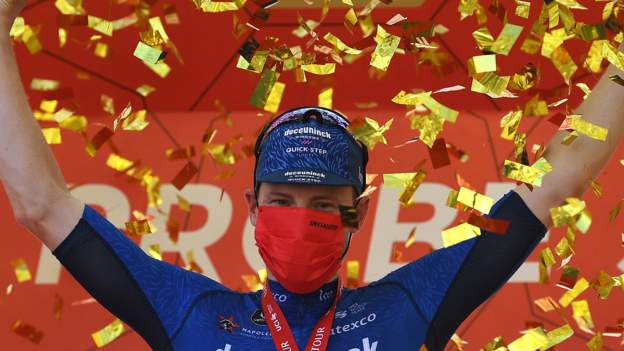 Ireland’s Sam Bennett won the 50th race of his professional career in a bunch sprint on stage four of the UAE Tour.

The Deceuninck-Quick Step sprinter emerged ahead of his main rivals on a fast left hand bend on Al Marjan Island after 204km of racing.

Slovenia’s Tadej Pogacar holds on to the leader’s red jersey, 43 seconds ahead of Britain’s Adam Yates.

“I was really nervous before the sprint – I just followed the guys. They did a great job,” said Bennett.

The 30-year-old, whose first win came at the 2013 Tour of Britain, won last year’s final Tour de France stage on the Champs-Elysees in Paris – the most prestigious victory for sprinters in cycling.

Bennett’s team-mate this season is Britain’s Mark Cavendish who has won 151 races in all and 30 stages of the Tour de France, just four behind Eddy Merckx’s all-time record.

Last year’s Tour de France winner Pogacar, 22, who rides for UAE-Team Emirates, took the lead after Monday’s time trial when winner of stage one Mathieu van der Poel left the race after a staff member of his Alpecin-Fenix team tested positive for coronavirus.

Yates, 28, in his debut race for Ineos Grenadiers, narrowly lost out to Pogacar up to Jebel Hafeet on Tuesday, and is in a strong position to challenge him on Thursday’s mountainous 170km race to Jebel Jais – a stage likely to decide the overall winner.