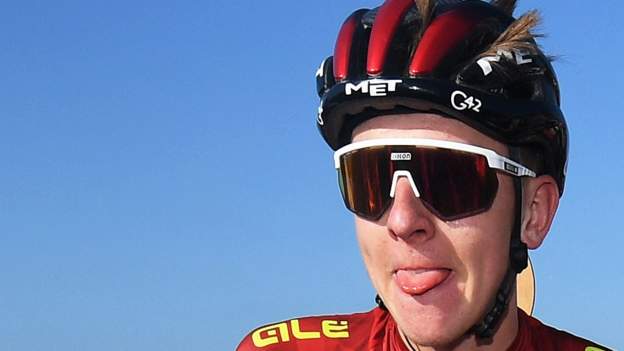 Tadej Pogacar retained his lead in the UAE Tour despite being handed a penalty for pushing another rider.

Ireland’s Sam Bennett won his second stage of the week-long race in a sprint finish into Dubai for his Deceuninck-Quick Step team.

Race leader Pogacar, 22, was handed a 10-second penalty to add to his overall race time and fined £158 by organisers.

He is now 35 seconds ahead of Britain’s Adam Yates, and is still expected to take victory on Saturday.

UAE-Team Emirates’ Pogacar finished just behind the sprinters, along with 28-year-old Yates, who is making his debut for Ineos Grenadiers.

But Pogacar, the 2020 Tour de France winner, was penalised along with team-mate Jan Polanc for pushing.

It is not yet known who, or at what point of the stage, Pogacar was adjudged to have pushed.

But riders can often be seen using their hands or elbows as they jostle for position when the peloton is travelling at high speed in the final few kilometres of a sprint stage.

Bennett, 30, who took his 50th career win on Wednesday, beat Elia Viviani and Pascal Ackermann to the line.

It was a tense finish to a stage which saw a crash with six of the 165km to go, just before the peloton disappeared through a tunnel and onto the Dubai coast.

Only crashes or high winds splitting the peloton are likely to give Yates a chance to close the gap on Saturday.