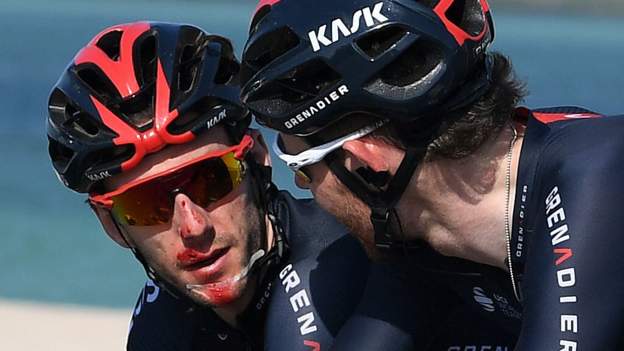 Britain’s Adam Yates came second on his debut for Ineos Grenadiers at the UAE Tour, despite crashing heavily.

Yates finished 35 seconds overall behind winner Tadej Pogacar after rivals slowed up to allow the 28-year-old to be treated for cuts to his face.

There appeared to be a tangle between the Ineos riders in the peloton with about 40km to go on Saturday and Yates landed face down.

What happened to Yates?

The collision happened on a straight stretch of road and Yates hit his face hard as some of his domestiques and riders from other teams fell around him. Pogacar, the 2020 Tour de France winner, had to take quick evasive action.

Ineos’ Daniel Martinez had to abandon the race before the end of the stage.

Yates was checked over by Ineos’ team doctor, Derick Macleod, on the road before getting back on the bike and continuing while having cuts dressed by the race medical car.

He is expected to be have further medical checks after the stage.

There have been questions about how the sport deals with head injuries and potential concussions in the wake of serious incidents in all three Grand Tours last year.

In one instance, France’s Romain Bardet was allowed to finish stage 13 of the Tour de France despite suffering a brain haemorrhage after a crash in which he collapsed trying to get back to his feet.

Yates battled with UAE-Team Emirates’ Pogacar during the seven-day race, but was unlikely to overhaul the deficit on Saturday’s flat 147km final stage from Yas Mall to Abu Dhabi Breakwater.

Before the crash, Yates and his British team tried to pull ahead of Pogacar by splitting the peloton in crosswinds on the open desert land, but his rivals were wise to the move and the group eventually bunched back together.

Pogacar took the lead after Monday’s time trial when the winner of stage one, Mathieu van der Poel, left the race after a staff member on his Alpecin-Fenix team tested positive for coronavirus.

Pogacar held the overall general classification after a tussle on Tuesday with Yates up to Jebel Hafeet, and stayed firm against the Briton on Thursday’s ‘queen stage’ to Jebel Jais, which has the highest mountains for overall contenders to claim the most time over their rivals.

However, the 22-year-old Slovenian was penalised 10 seconds on Friday, along with team-mate Jan Polanc, for pushing.

Meanwhile, the fist major Classic race of the season, Omloop Het Nieuwsblad is under way, in which another promising British Ineos rider Tom Pidcock is competing.