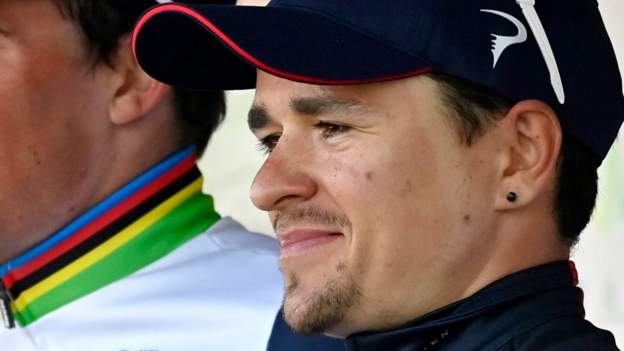 Britain’s Tom Pidcock finished third in the Kuurne-Brussels-Kuurne Classic in his third race for Ineos Grenadiers.

The 21-year-old was involved in the bunch sprint at the end of the 197km one-day race, won by Denmark’s Mads Pedersen of Trek-Segafredo.

Total-Direct Energie’s Anthony Turgis, who finished second, half a wheel ahead of Pidcock who started his sprint early in a bid to claim an unlikely victory.

Pre-race favourite Mathieu van der Poel was in a late break that was caught.

The race, which takes place on difficult cobbled climbs around the Ardennes region of Belgium, was brought to life by Dutch rider Van der Poel of Alpecin-Fenix – one of the world’s best young riders.

He broke away from the main group with 85km still to go alongside Ineos’ Jhonatan Narvaez of Ecuador.

But the group was caught in the final few hundred metres by a chasing group, containing Pidcock, who finished ahead of the Dutch champion.

Pidcock, from Leeds, has spent much of the winter racing Van der Poel in the cyclo-cross discipline, and was one of the few riders to challenge him, along with Jumbo-Visma’s Belgian star Wout van Aert.