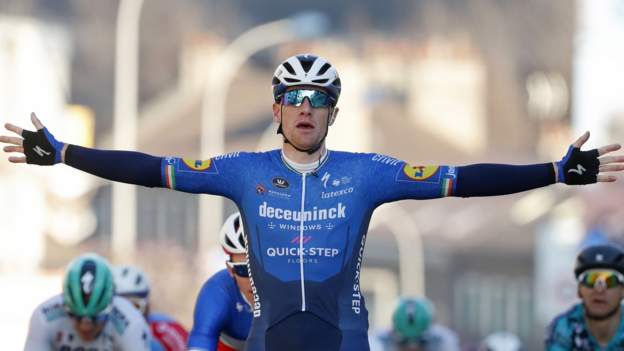 Australian Porte, 36, crashed with 30km to go, landing on his left hip.

Britain’s Giro d’Italia winner Tao Geoghegan Hart is a contender to win the week-long race for Ineos, along with Jumbo-Visma’s Vuelta a Espana champion Primoz Roglic.

It is the 35-year-old’s highest-placed finish since June 2018, in a race won by Tim Merlier of Alpecin-Fenix.

Cavendish, one of cycling’s most successful sprinters with 30 stage wins in the Tour de France and 151 victories in his career, joined Deceuninck-Quick Step for 2021.

He ended last October’s Gent-Wevelgem race in tears, saying that he felt his career could be over.

In Sunday’s opening Paris-Nice 166km loop starting and finishing in Saint-Cyr-L’Ecole near the Palais de Versailles, Deceuninck-Quick Step’s Bennett powered over the line ahead of Arnaud Demare of Groupama-FDJ and Mads Pedersen of Trek Segafredo.

The riders expected to compete for the general classification will establish themselves on the fourth stage after another two sprint stages, in what is a dress rehearsal for June’s Tour de France.

Just as in October’s Giro triumph after Geraint Thomas was injured early on, Geoghegan Hart, 25, will now be a strong favourite to be backed for the after Porte’s retirement.

After crashing, Porte gingerly got back on his bike but abandoned before the end of the stage.

The race is only Geoghegan Hart’s second since he won the Giro after a dramatic time trial in Milan.