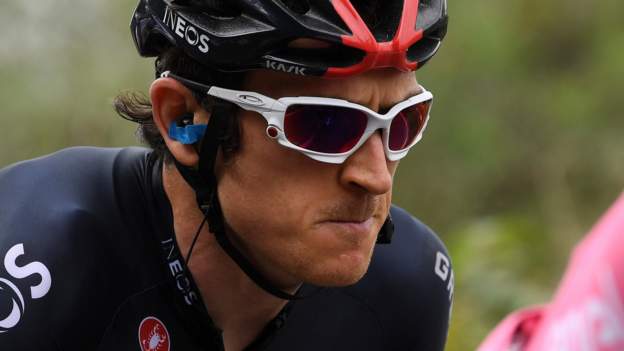 Geraint Thomas is looking forward to testing himself against a stellar line-up at the Tirreno-Adriatico stage race, which starts in Italy on Wednesday.

But he will play a supporting role in Italy to team-mate Egan Bernal, Ineos’ leader at the Giro d’Italia in May.

“There’s no expectation to go and win. I’ll try for sure but it will be good just to see where I am,” said Thomas.

“Certainly form and fitness wise, Egan is going better, but the Giro starts in May and the Tour starts at the end of June.

“I still feel I’m in good enough shape to definitely help him and be there in the thick of it and, depending how the race goes, maybe take an opportunity here and there.

“I’m just looking forward to racing. I haven’t raced my bike a lot. I just want to get some consistent racing.”

The race is often contested by riders aiming to win the Giro d’Italia, one of road cycling’s three Grand Tours and second only to the Tour de France in terms of prestige.

Thomas and Bernal are part of a formidable Ineos line-up for the Tirreno, which also features the likes of Jonathan Castroviejo, Filippo Ganna and Michal Kwiatkowski.

The rest of the field is stacked with quality, including last year’s winner Simon Yates, reigning Tour de France champion Tadej Pogacar and several other high-profile riders such as Nairo Quintana, Thibaut Pinot and Julian Alaphilippe.

“Yatesy’s targeting the Giro so he’s going to be in top shape.

“I’m going better than expected for the training I’ve been doing. So it’s all positive and it will just be nice to be there, in the mix and challenging for the win.”

Leadership at Ineos, formerly known as Team Sky, has been a talking point for years. Initially it was Bradley Wiggins and Chris Froome and, since their departures, Thomas and Bernal have been the subjects of the speculation.

Both are former Tour de France champions, Thomas winning in 2018 before finishing second behind Bernal a year later.

In 2020, Bernal was chosen to lead Ineos in France with Thomas left out of the team and selected instead to spearhead their Giro d’Italia campaign.

This year, roles have been reversed and Thomas welcomes the internal competition.

“We’ve got a strong team with Egan as well, so we’re looking forward to getting stuck in,” he said of the seven-stage Tirreno.

“The squad is so strong these days. We’ve also got Paris-Nice, another big race, going on at the minute and there’s a super strong team there as well.

“It’s good for me. It keeps you motivated and on your toes.

“Since my track days as well, there’s been competition for places and that’s key to any successful team, striving to be better all the time.”

And while Bernal will start the Tirreno as Ineos’ leader, Thomas is not ruling out a shot at the title after coming so close last year.

“After the race, I thought I could have ridden a bit more aggressively,” the Welshman added.

“I’d had a turbulent year to say the least so I was riding a bit conservatively but then, looking back, I was going better than I really thought.

“Something always seems to go not quite right but I’ll keep trying and sometimes, when you least expect it, something happens.”