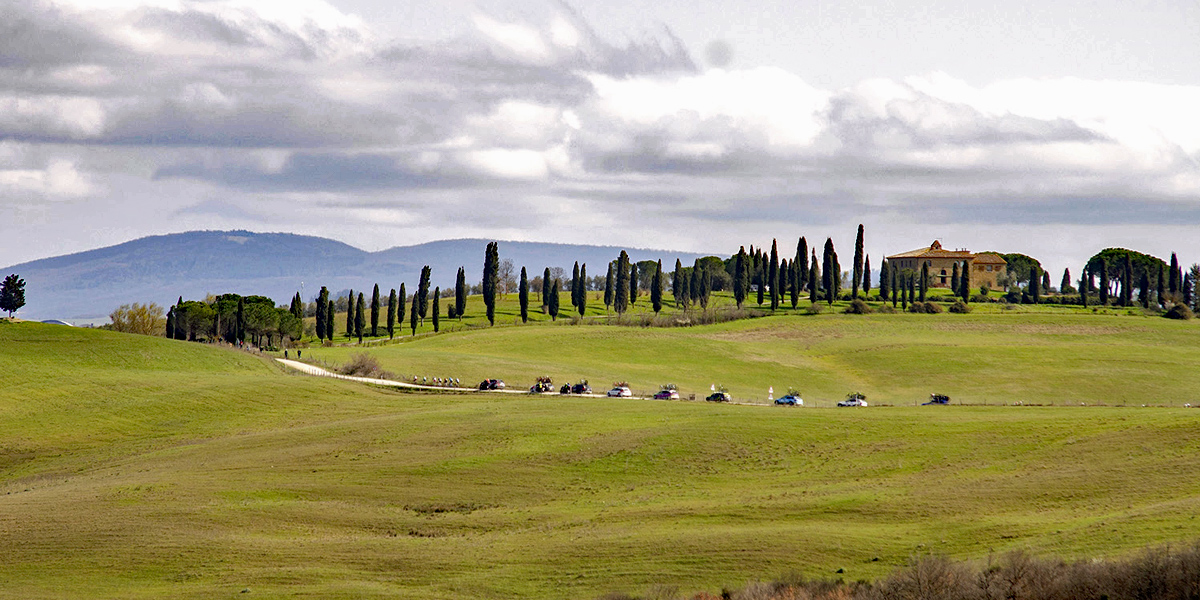 Roadside PEZ: Our PEZman in Italy, Alessandro Federico, wasn’t going to miss the 2021 Strade Bianche; No race accreditation and the worry of being stopped by the police was going to make it difficult. ‘Race Chasing’ is Ale’s speciality, if anyone could do it… Ale – Il campione race chaser. 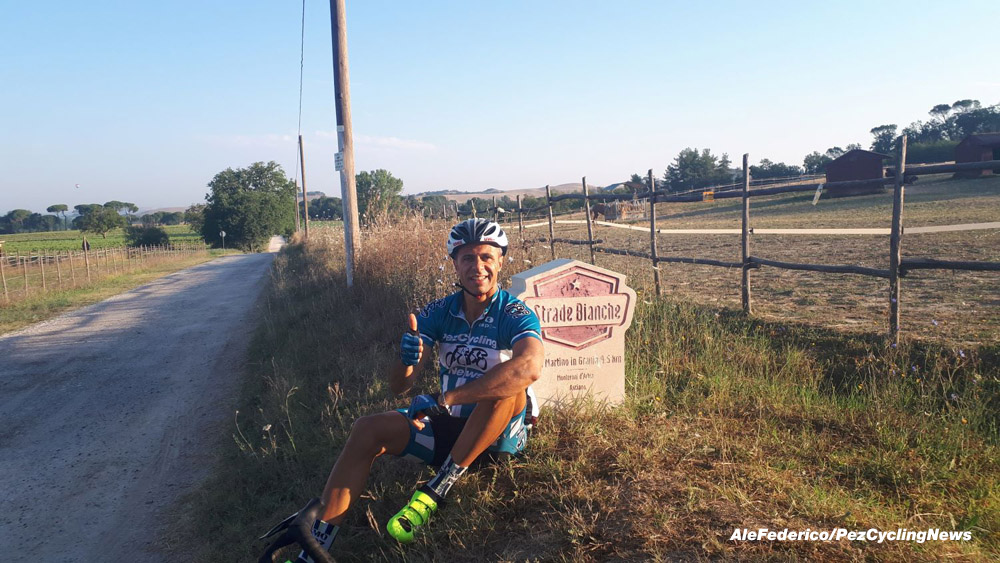 This picture was taken last year in August 7am and it was already around 90°F but was great to ride on the Strade Bianche route. This is sector number 6 at its very beginning. Each sector of the race is signed by a milestone specifying name and length

Last Saturday I was able to enter the Siena region and to cover the Strade Bianche for PEZ, even if the centre of Italy is almost blocked by local, regional and state regulation against the spread of the covid disease. It was a strange day, full of contrasts between the exciting race and the empty roads. Spectators are the great added value in cycling, and on Saturday they were missing, so that our roadside is inevitably poorer too. But still there’s a story to post and still thoughts to share. Take a bit of time, and discover why. 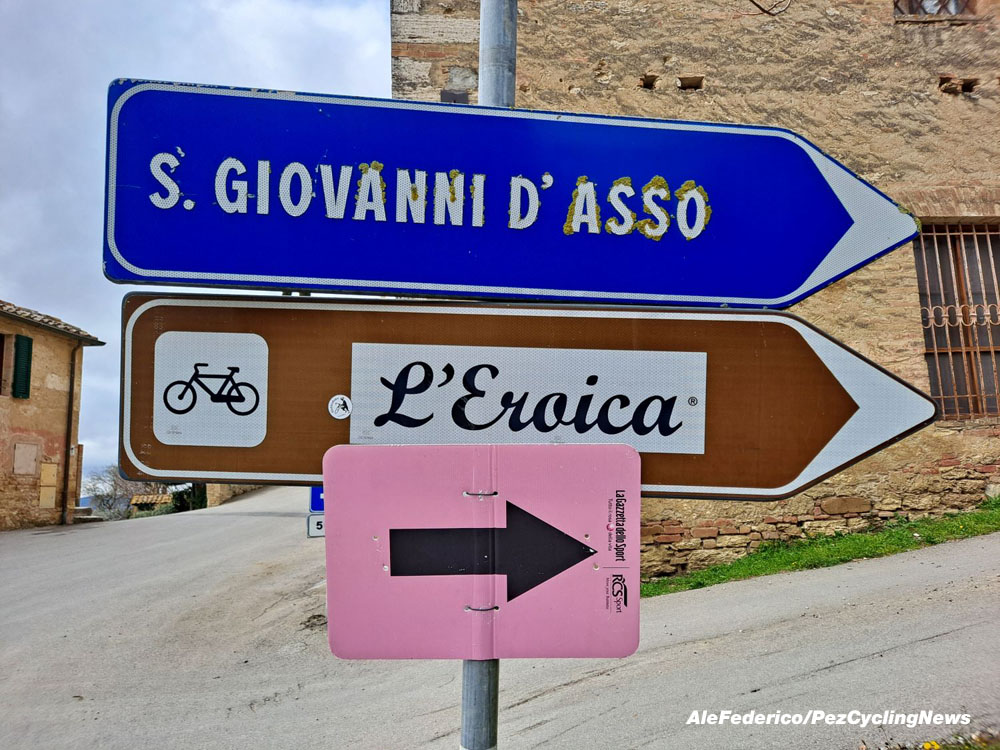 Road signs and race signs. L’Eroica is recognised as local speciality and people travel from very far to ride it 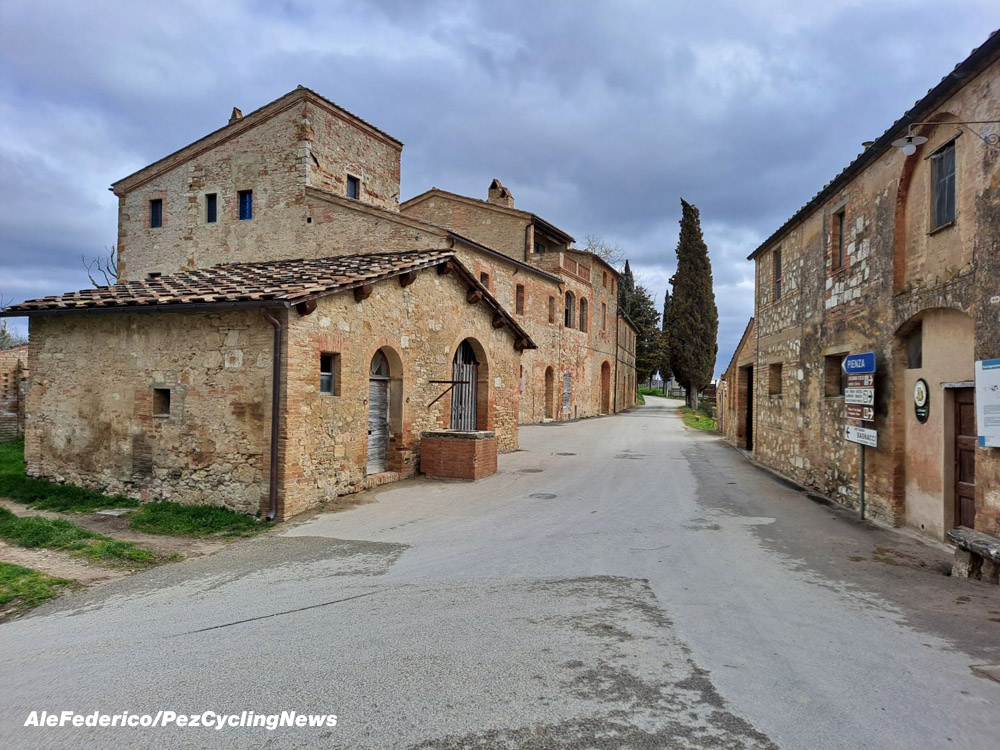 This very small village of Lucignano d’Asso is a jewel. Few houses but perfect, and people live there (quite happily, I believe)

I have chased Strade Bianche since 2010, so I have covered much of the history of this young classic, but I have to admit that the last two edition were so significant for me (and for many others) that this race will be my favourite for the years to come, despite Milano Sanremo still deserving a piece of my heart. Last year was in August when Strade open the packed season of the great races. It was the hottest day of the summer, in the centre of Italy it hit 105ºF in the morning and it held it for the entire day until the evening. I was in Siena with a couple of friend with our bikes and we enjoyed an early morning ride covering the last part of the race. The race itself was set in the afternoon and in those hours I learnt the real meaning of the word ‘thirst’! The sun was so hot and there was so much dust that water was drink too fast and we all were struggling for a bottle on roadside. 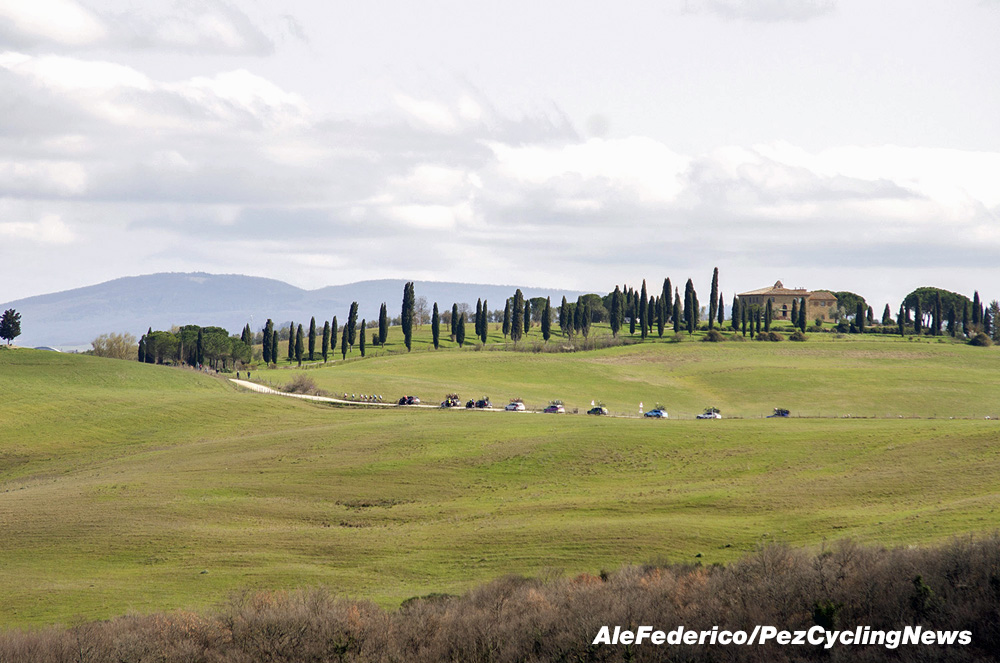 The early break flies over Crete Senesi, the hills of southern Siena where lonely trees are living 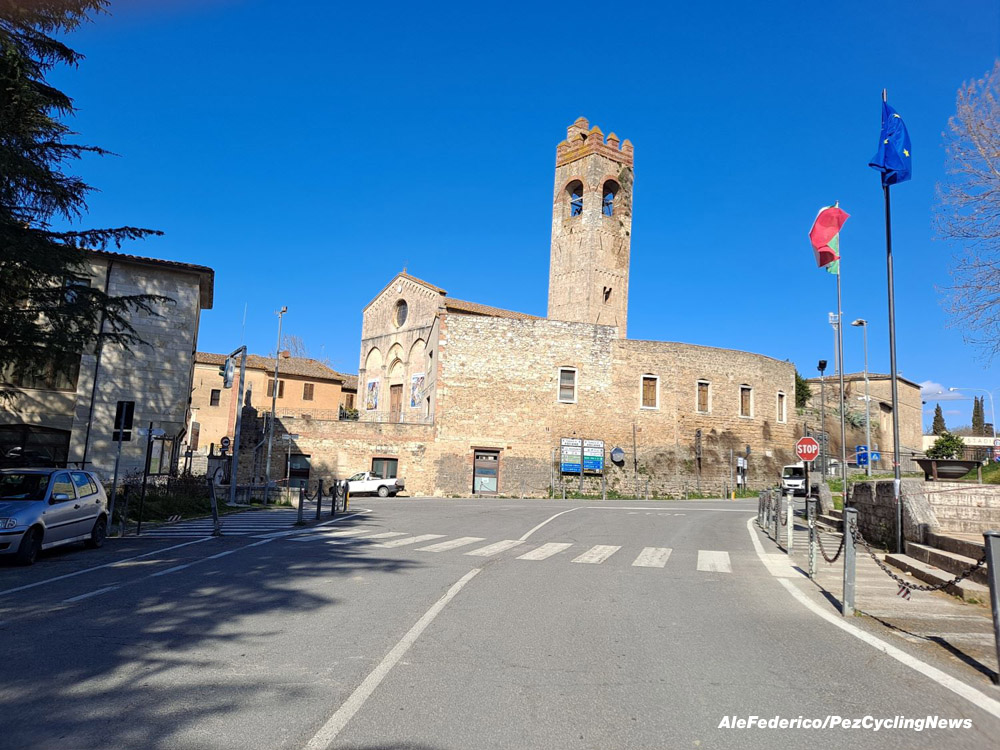 Asciano town is the crossway of the Strade Bianche chase. You always have to pass here to join the next sector. Here starts also the most difficult sector named Monte Sante Marie

This year’s race is back to the traditional calendar and opens Italian classics season in March. Unfortunately covid-19 is still here and during last week it seems strong again in our country, so that moving from home is not allowed and not possible to travel unless for work or health reasons. My luck was a PEZ assignment for the race, plus my cycling journo card but you can always find the wrong cop on your journey… The trip from home to Tuscany is about three hours on a route I know pretty well; just the beauty in itself to pass through many landscapes which are great, even out of season. I realise I’m in the right place when I see the first road sign indicating “L’Eroica”, the legendary amateur race which has a lot more gravel sectors than the pro race. 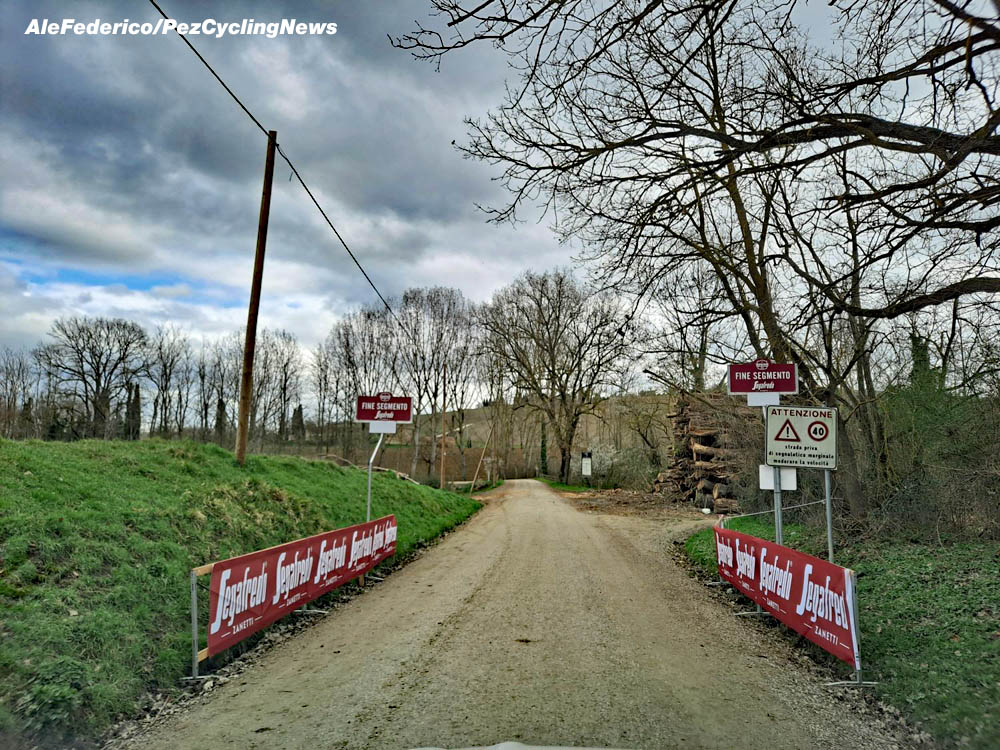 On the day of the race each sector is identified by race signs put there by RCS to alert riders of the beginning and the end of the sector. The same happens for Paris Roubaix 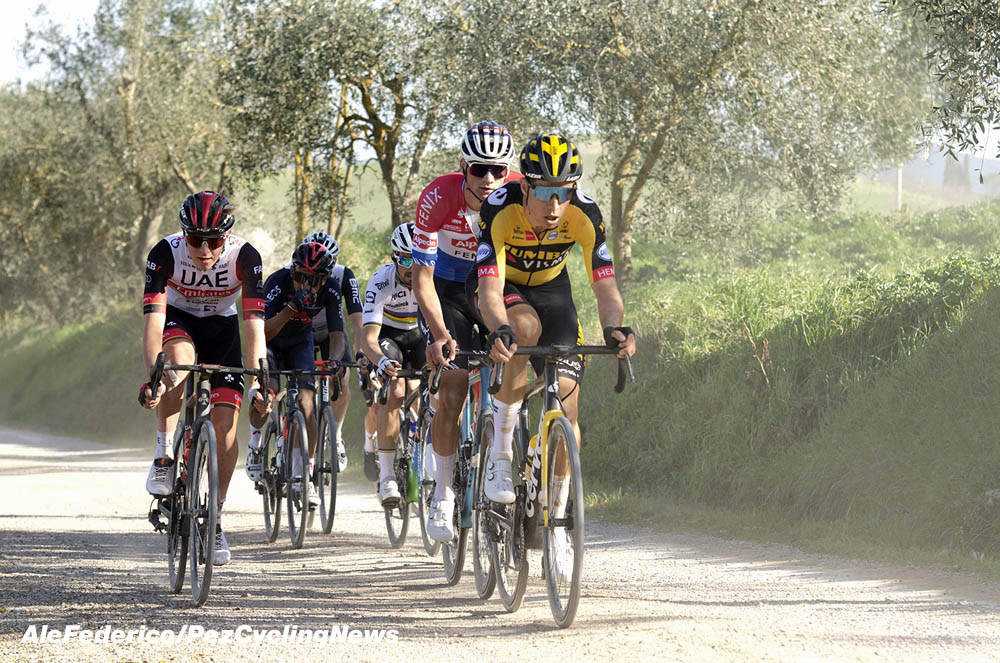 Plan of the day is to take it easy. Three race passages and keep a good distance from possible crowded places; it isn’t worth chasing 6 or 7 passages when you spot three good ones. Plus this time I have no press plate for the car from RCS, because they’ve limited dramatically the accreditations. It doesn’t take too long for me to realise that there’s nobody on the road and there’s no danger of crowded places. The planned spots are on sector number 5 (Lucignano), at half-way in the race, to see who’s working on the front and visit the vast section where the wind blows strongly, sector number 7 (Monte Sante Marie) because this is the key sector where the real selection comes, and sector number 9 (Colle Pinzuto) to be spectator of the last moments of the race where big move take place. 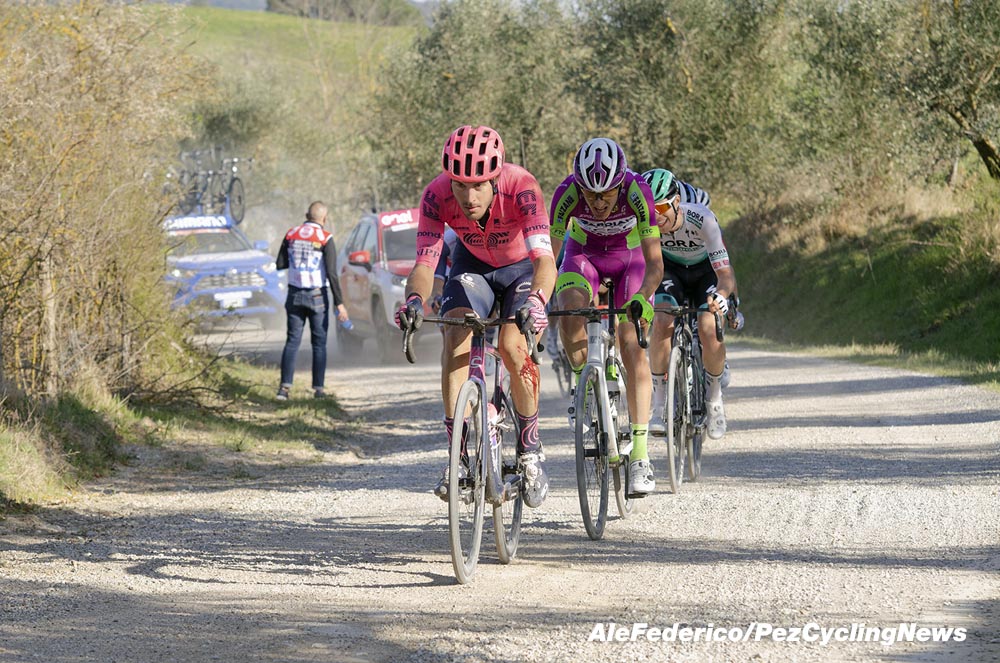 Italian rider Bettiol is chasing but he crashed. It’s pretty clear looking at his left leg.. 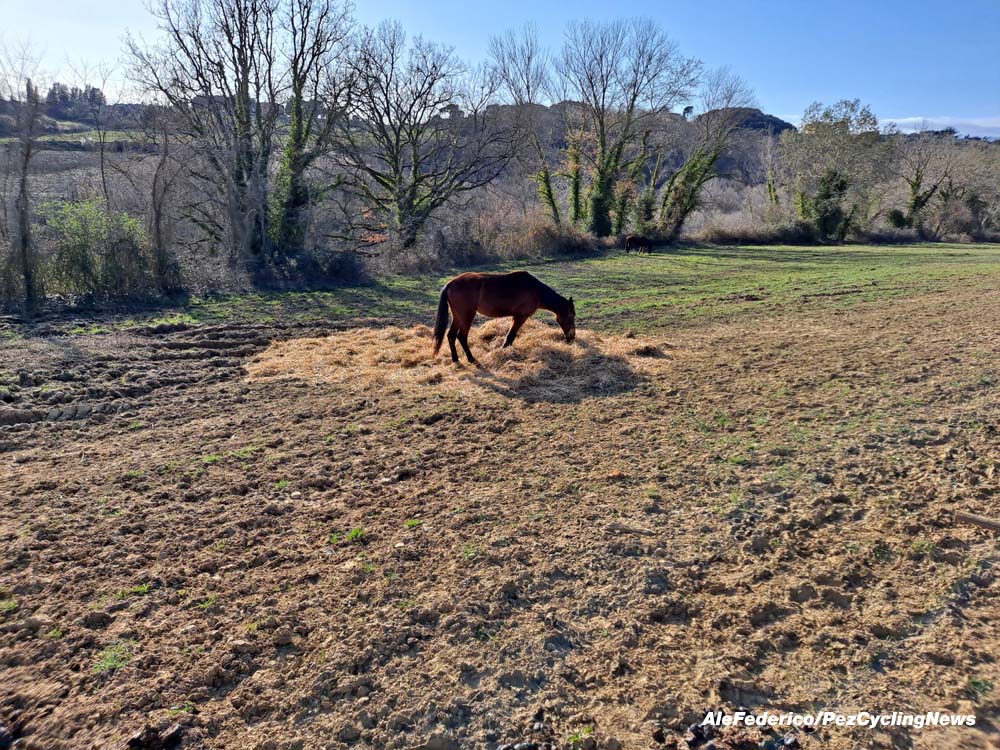 A lonely horse is waiting in Colle Pinzuto for the race. Just a few minutes disturbance for it with cars and helicopter. Than it will be back to his fodder

The area covered by the race is very rural and deserted of people. Just fields and vineyards. Few houses sit on the hills and you can spot a car from kilometres away before meeting it. A little rain dropped the night before so there won’t be mud nor much dust today. When the race crossed “Crete” fields it’s lunch time and nobody around. There is an early break and Jumbo working in the bunch. The way from one sector to the other isn’t too long because the race is continuously snaking to find the gravel. But the sector in Monte Sante Marie is the key one: 11 kilometres of steep climbs and fast descents. The race is announced by dust on the front hill coming from cars. It’s the Belgian Van Aert, winner in August and my favourite rider, making the race hard and pulling the fragmented group of the best. Behind lot of riders are in difficulty and also all Italians are out of the big battle. I recognise Bettiol, who’s local from Siena, winner of Ronde two years ago, but he has a cut on his left leg: possibly a crash. 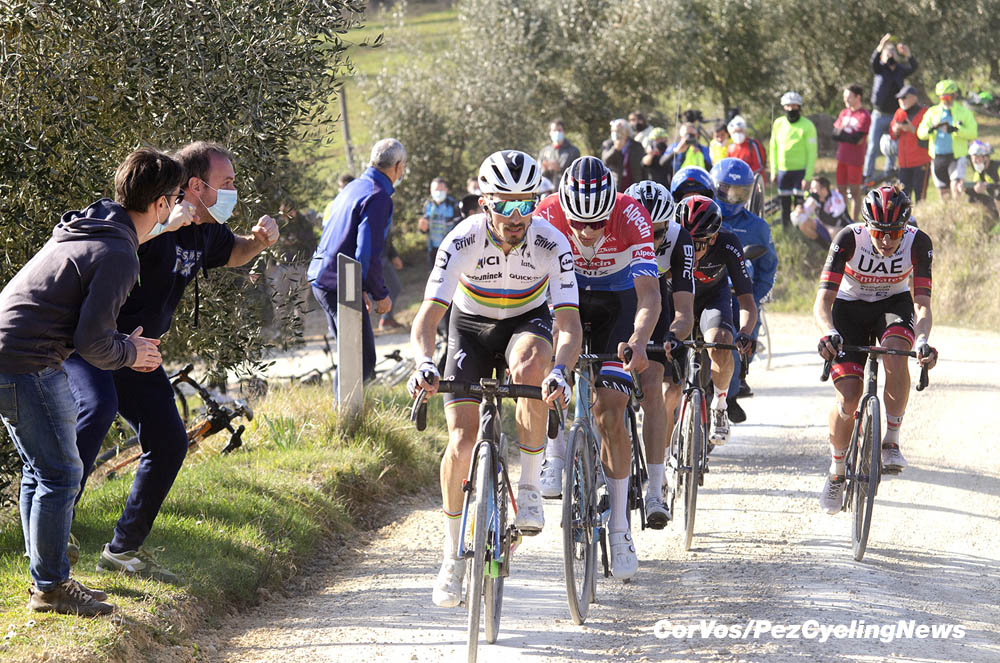 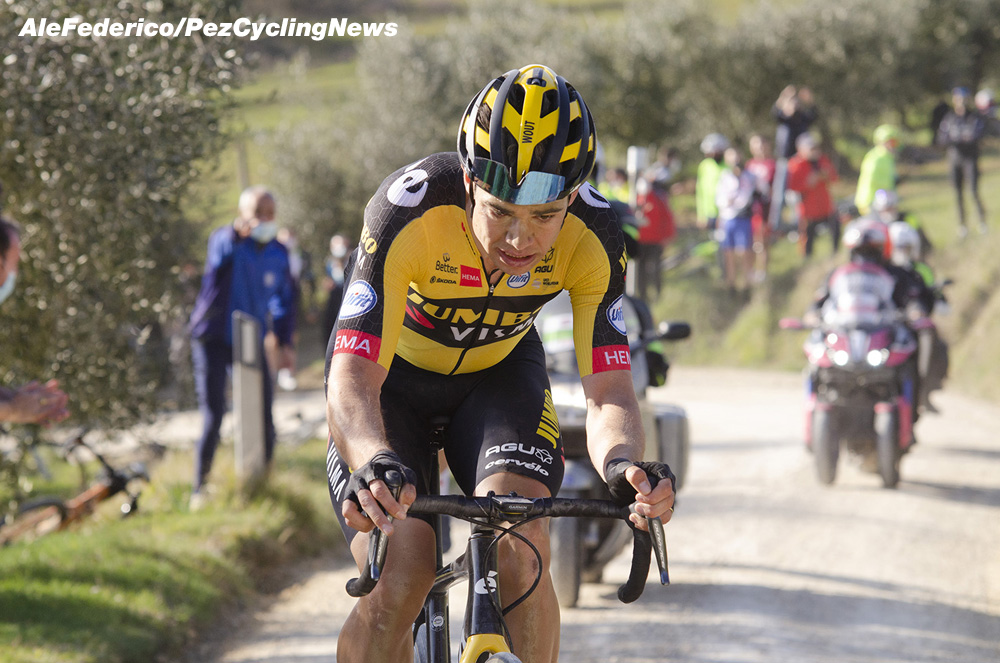 From sector to sector I drive with car radio on the race news, so that I can workout whether I’ll be in time or not for the next spot. The roads are empty, no rush today. I come very close to Siena and take the right way again, out on the hills around. It’s early afternoon and it’s warm now. It’s a pleasure to be out walking the climb named “Colle Pinzuto”. One steep hairpin on gravel and then another one: Last summer I remember I did a great effort to maintain the bike control here. Few people are here but real few, possibly only locals. The race comes and the best of the best are fighting for the win. The World champion Alaphilippe is leading the attackers but the big surprise is Van Aert, my favourite, loosing few seconds from first group. It takes more than twenty minutes to see everyone pass, this is a selective race, but in the end fields find again their loneliness and horses may eat their fodder quietly. The way back home is the same way I covered in the morning and last “touch” of strade bianche is given by a horse running the same way I drive to find the main road. And only that moment I realise that for the entire day I did’t meet anybody. I don’t tell a lie. No one. 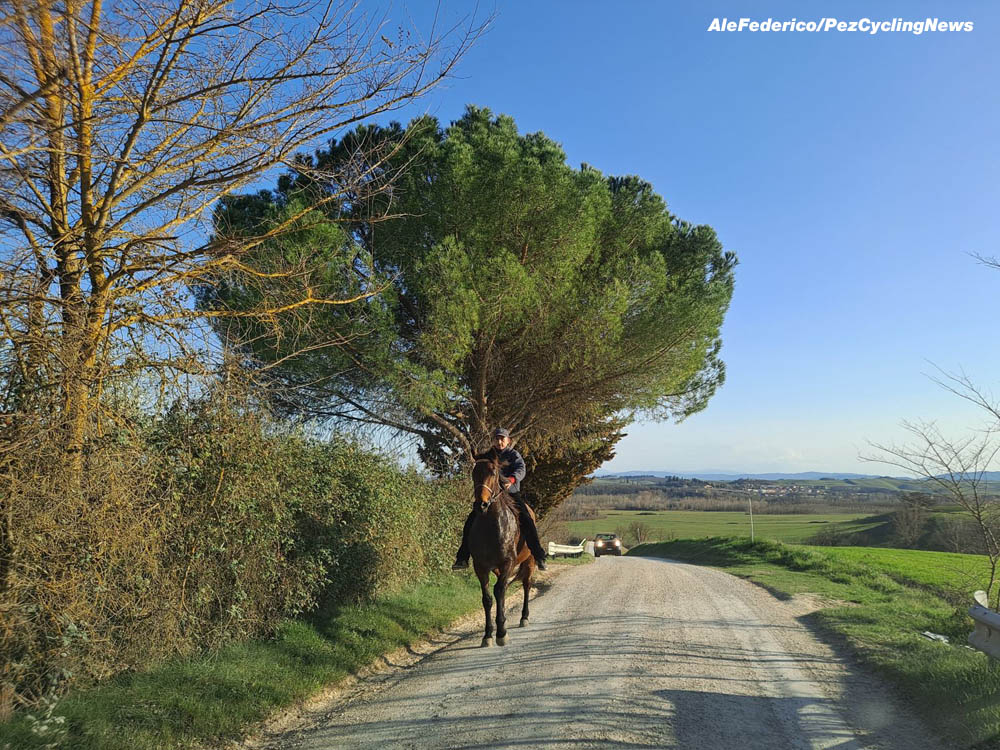 Bye bye strade bianche. Next year we really hope to be back to normal life

# You can visit my Instagram profile to see some more of my shots. If you decide to have a wall painting of any of these pictures contact me on ([email protected]). #