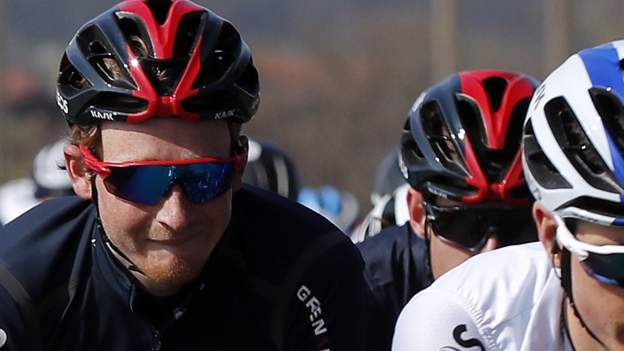 Ineos Grenadiers rider Tao Geoghegan Hart is out of the Paris-Nice race after injuring his wrist in a crash on stage four.

The Briton, who won last year’s Giro d’Italia, fell on to his right-hand side half-way through a fast hairpin corner.

He initially continued, but later it was confirmed he had abandoned the race and had been taken to hospital.

It is bitter blow to Geoghegan Hart, who was contesting only his second race since winning last year’s Giro in spectacular circumstances in Milan.

After Wednesday’s 188km stage from Chalon-sur-Saone to Chiroubles, they will now look to Laurens de Plus for their general classification hope.

Meanwhile, Jumbo-Visma’s Wout van Aert won stage one of the Tirreno-Adriatico race in a bunch sprint after a 156km stage that started and finished in Lido di Camaiore.