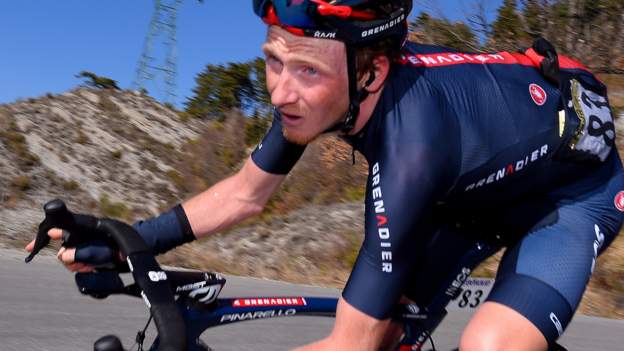 Tao Geoghegan Hart has returned home for further monitoring following his crash at Paris-Nice on Wednesday.

The Ineos Grenadiers’ rider was assessed by the team’s medical staff but he will be monitored at home in Andorra for symptoms of concussion.

He was in only his second race since winning last year’s Giro d’Italia.

Geoghegan Hart was at the head of the race when he appeared to lose his front wheel on the inside of the corner, landing on his head as well as suffering facial and knee abrasions.

Despite jumping straight back onto his bike to continue, both rider and team have been widely praised for pulling Geoghegan Hart from a race he will have been widely expected to challenge for victory in.

There are wider concerns in cycling about how the sport deals with head injuries and potential concussions in the wake of serious incidents in all three grand tours last year.

AG2R La Mondiale’s Romain Bardet was allowed to finish stage 13 of the Tour de France despite suffering a brain haemorrhage after a crash, in which he collapsed trying to get back to his feet.