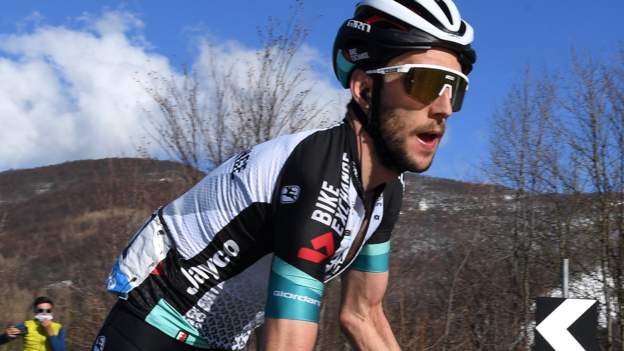 Ineos Grenadiers’ Thomas brilliantly clawed back most of his time deficit to the leaders on the steep final climb but he was hauled back and ended the stage nearly a minute down.

The 148km stage up to Prati di Tivo was the race’s ‘queens’ stage – where riders tackle with the most demanding combination of mountainous ascents and descents – and it proved a dramatic day.

Last year’s Tirreno-Adriatico winner Yates was out of contention for overall victory after suffering cramps on Thursday, losing more than a minute to his rivals.

But he surprised the field with a fierce attack from 3.5km out which saw him nearly catch Pogacar at the line.

Thomas crossed the line with Ineos team-mate and 2019 Tour de France winner Egan Bernal nearly a minute behind Yates and Pogacar. Bernal had also faded following his own attempt to ride off the front of the leaders’ group with just 3km to go.

Thomas, 34, was the first to try to claw back his 40 second overall time gap to blue jersey wearer Van Aert, of Belgium, when he rode off with 6km to go, showing the kind of strength it took in winning the 2018 Tour.

But Thomas was soon caught by Slovenia’s Pogacar who then powered on alone to take the lead on the road and the blue jersey.

Thomas and Colombian Bernal, 24, are now one minute 25 seconds and one minute 26 seconds down respectively.

Yates is now one minute 59 seconds down in the overall standings.

In the day’s other race, Paris-Nice, 2020 Tour de France runner-up Primoz Roglic of Jumbo-Visma won his third stage – the 119km run up to Valdeblore La Colmiane.

Roglic is expected to claim the yellow jersey in Sunday’s final stage into Nice.