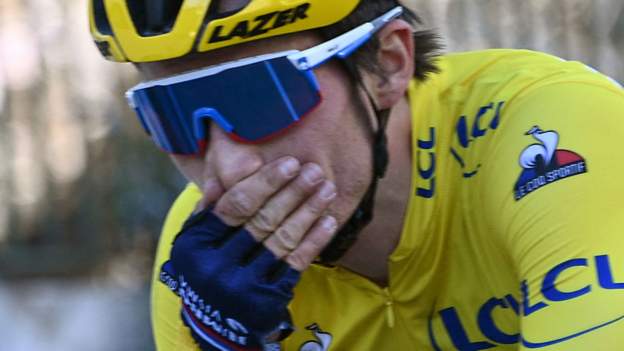 Van der Poel slumped to the ground after crossing the line following a 65km break as race leader Tadej Pogacar nearly caught him metres from the line.

In Paris-Nice, Primoz Roglic lost the race after a crash on the final stage.

Jumbo-Visma’s Roglic had dominated the week-long event, but crashed with about 20km to go and finished several minutes down.

In an equally dramatic finish to last year’s Tour de France, Roglic lost a minute lead to fellow Slovenian Pogacar during a time-trial, in one of the most remarkable conclusions in the event’s history.

On Sunday Roglic’s bloodied thighs were exposed through his shorts as he tried to get back to the peloton without the support of his team-mates.

Roglic, 31, had won three stages in this year’s race to bring a near minute lead to the final day.

Bora-Hansgrohe’s Max Schachmann inherited overall victory by 19 seconds over Aleksandr Vlasov of Astana-Premier Tech, with Roglic down in 15th, two minutes 16 seconds behind.

Magnus Cort of EF Education-Nippo won the final 93km stage to Levens, shortened because of fears around the spread of coronavirus on the Promenade des Anglais in Nice.

In Tirreno-Adriatico in Italy, Pogacar (UAE-Team Emirates) closed a gap of two and a half minutes to Van der Poel (Alpecin-Fenix) in the closing 10km after a strong chase which left his rivals for the overall lead behind.

Van der Poel, 26, has won two stages of the race to add to the Strade Bianche classic last Saturday.

Pogacar, 22, won February’s UAE Tour, as well as being favourite for the blue jersey here.

Yates, 28, who suffered cramps on Thursday’s second stage but recovered well on Saturday, is now six minutes 58 seconds behind in the overall, with Thomas, 34, 15 minutes and 15 seconds down.

It will be a bitter disappointment for the British pair, who dominated last year’s Tirreno-Adriatico, with Yates beating Thomas to victory by just 17 seconds.