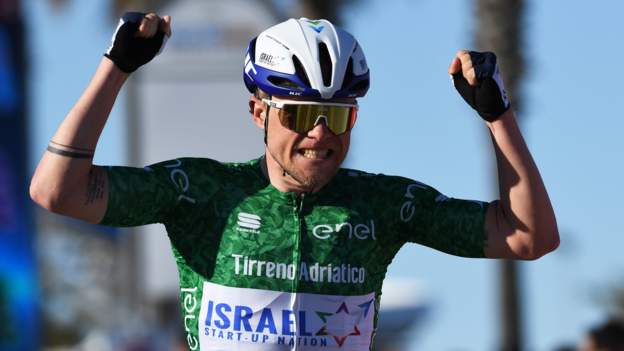 UAE Team Emirates rider Pogacar, who won stage four to take the race lead from Van Aert, looks on course for overall victory, holding what is likely to be more than enough of a margin over the Belgium national time trial champion.

Pogacar, 22, is also Slovenian national time trial champion and showed his prowess against the clock by overhauling compatriot Primoz Roglic on the penultimate stage to win the 2020 Tour.

Ineos Grenadiers’ Egan Bernal is fourth overall and will hope to make up the 30 seconds he needs to overtake Bahrain-Victorious’ Mikel Landa, a weaker time trial rider, to finish on the podium.

Stage six was expected to end in a bunch sprint finish, but a six-man group built up enough of a gap to hold off the sprinters’ teams coming into the finishing circuit.

Latvia’s Emils Liepins was dropped on the last climb, leaving five riders to contest the finish.