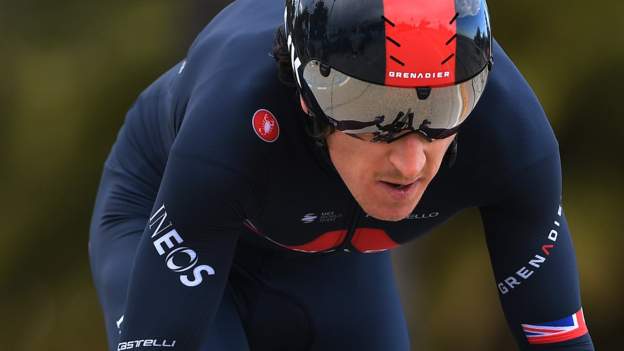 Britain’s Geraint Thomas was 11th fastest in the time trial, but finished more than 17 minutes down overall.

Ineos Grenadiers’ Thomas and compatriot Simon Yates of Bike Exchange both struggled to reproduce the form which saw them dominate last year’s race.

Pogacar won Saturday’s mountainous ‘queens’ stage on the way to victory, and is in scintillating form having won February’s UAE Tour.

“It’s been a great start to the season, but I think I need a little bit of rest now,” said Pogacar afterwards.

Thomas, 34, will be disappointed with his overall result of 24th, 17 minutes and 12 seconds behind Pogacar, 22.

Thomas is expected to contest this year’s Tour de France, which Pogacar will be defending after last year’s dramatic time trial victory over Primoz Roglic.

Yates, 28, suffered cramps last Thursday, losing more than a minute to his rivals before rallying with a spirited performance on Saturday.

He finished 10th overall – seven minutes and 45 seconds down.