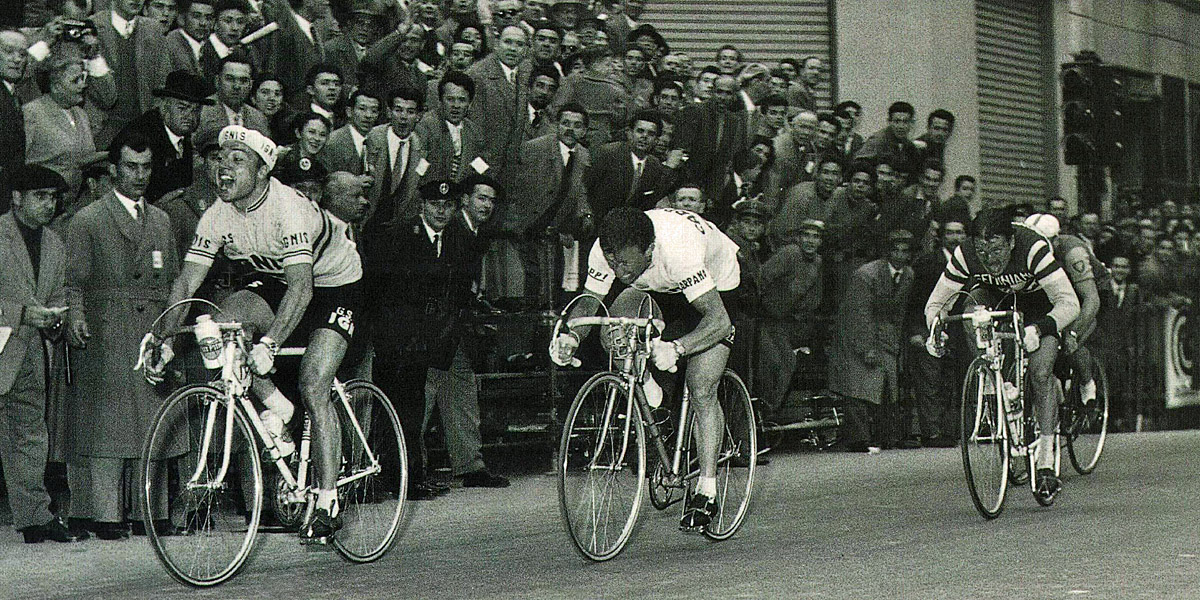 “If there had been the Poggio back then, they wouldn’t have seen me until the finish!” So says Brian Robinson, who in 1957, became the first English-speaker to stand on the podium of the Primavera. But for the cycling politics of the time, Robinson might well have pre-dated Tom Simpson as the first Englishman to win this legendary race, but let’s go back to ’57 and hear it from Brian. 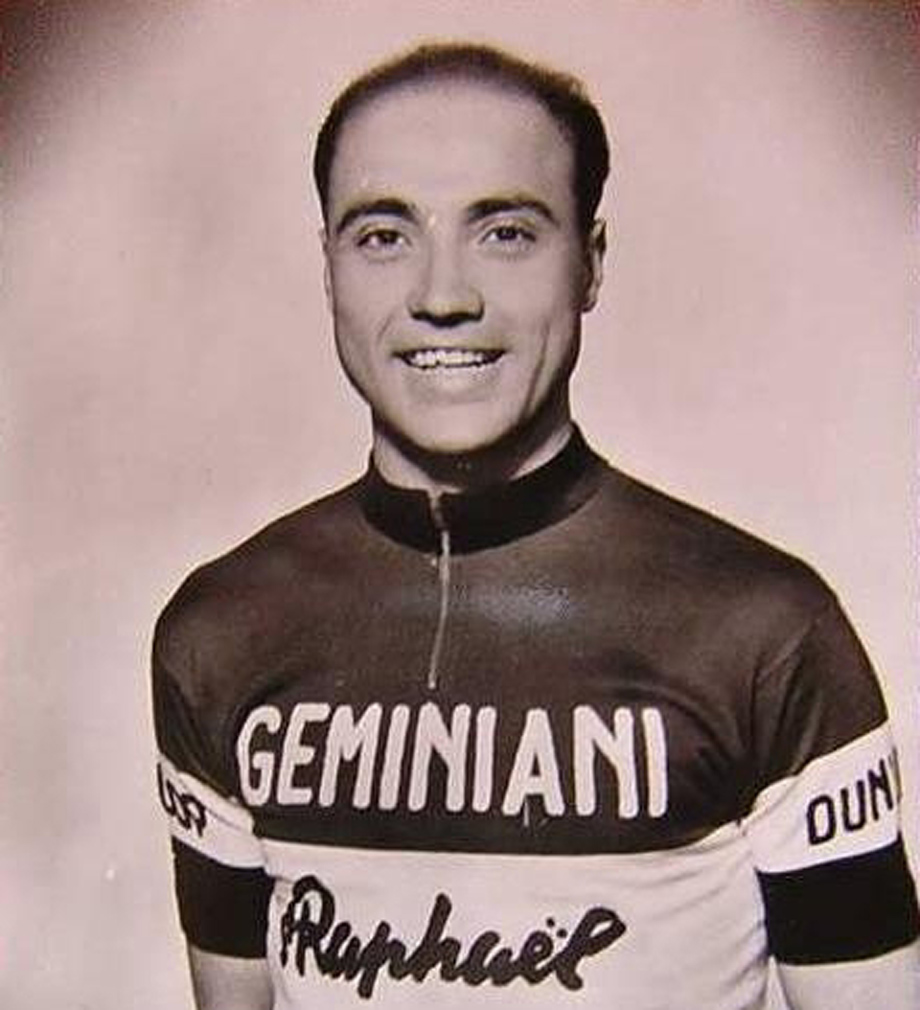 “I was 27 and riding for St. Raphael-Gemiani, that was the team I rode with for my whole career, albeit we had different bike sponsors. I had just ridden Paris-Nice, which is good training for Milan-San Remo and whilst I can’t remember my exact placings, I think I got second on a stage and was in the top ten overall. In other words, I was going as well as I ever had. Before the start, our manager said that he was tying to poach the Spanish sprinter, Miguel Poblet away from the team he was with at the time – Ignis and we should help Poblet if we could; he was even on a Geminiani bike.” 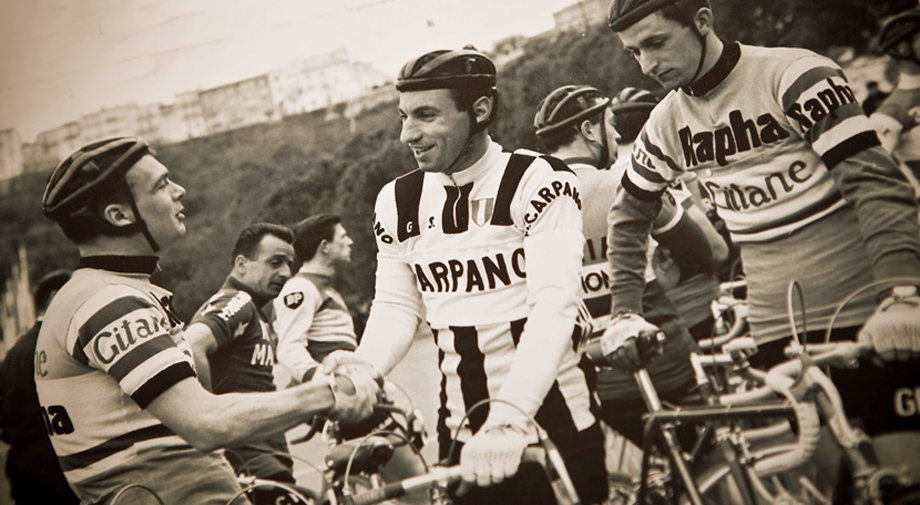 I asked who was designated team leader for the race: “The squad wasn’t structured like that, whoever was going best on the day was the protected rider, that was one of the things I liked about the team. I wasn’t really a classics man, but that was a race that suited me; nearly 300 kilometres and hilly. The parcours for the finale was very similar back then, but the Poggio wasn’t added until later.” 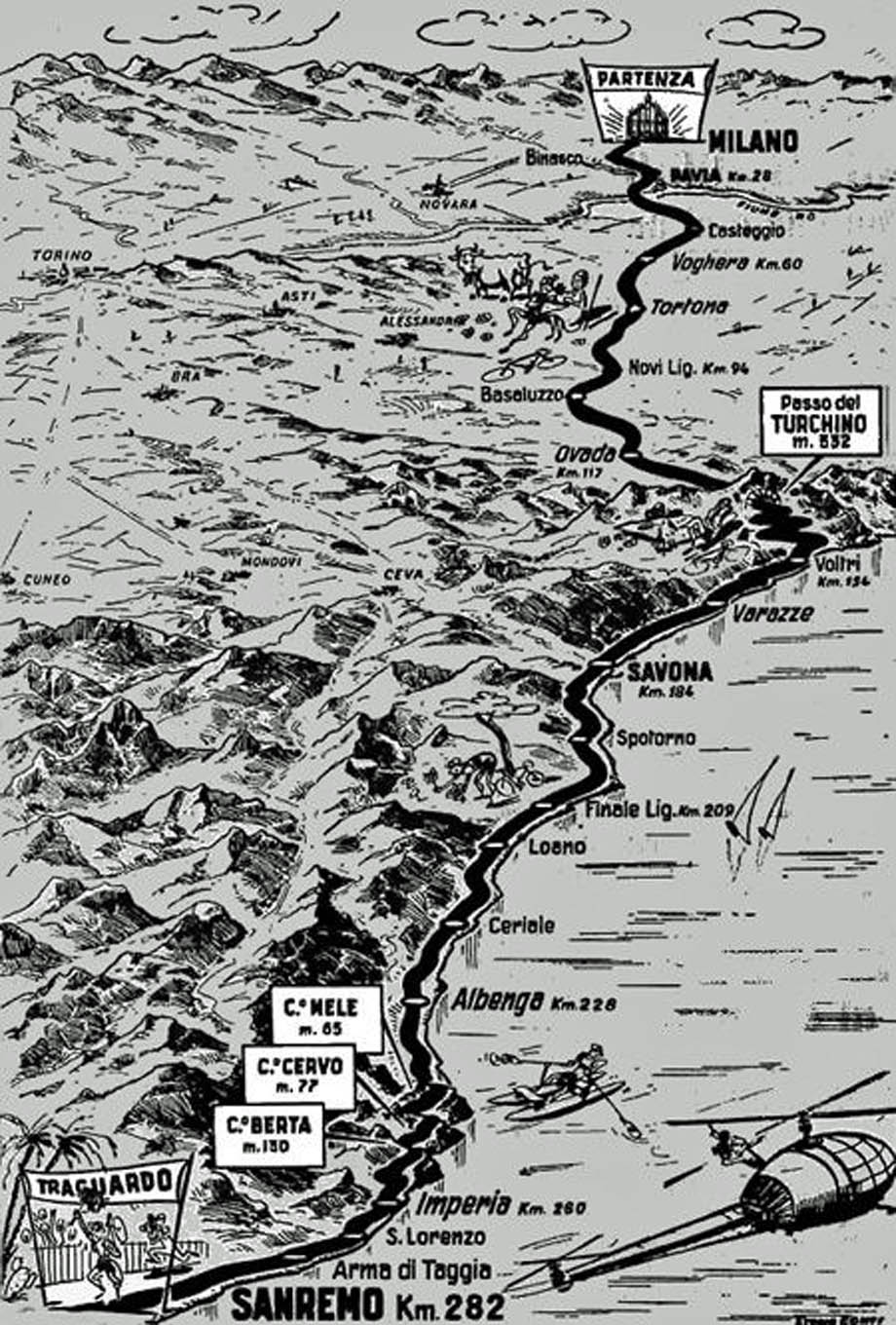 “I attacked on the Capo Berta (one of the coastal climbs which helps mould the final result) and opened a gap. I was about 50 yards clear and behind me I heard Poblet yelling at me to wait. I did, and he got up to me, coming in to the finale there were three of us, the Belgian, Fred De Bruyne, who had won the Primavera in 1956 (De Bruyne was a very successful roadman-sprinter, he also won Liège-Bastogne-Liège, the Tour of Flanders, Paris-Roubaix and Paris-Tours) had come across to us.” 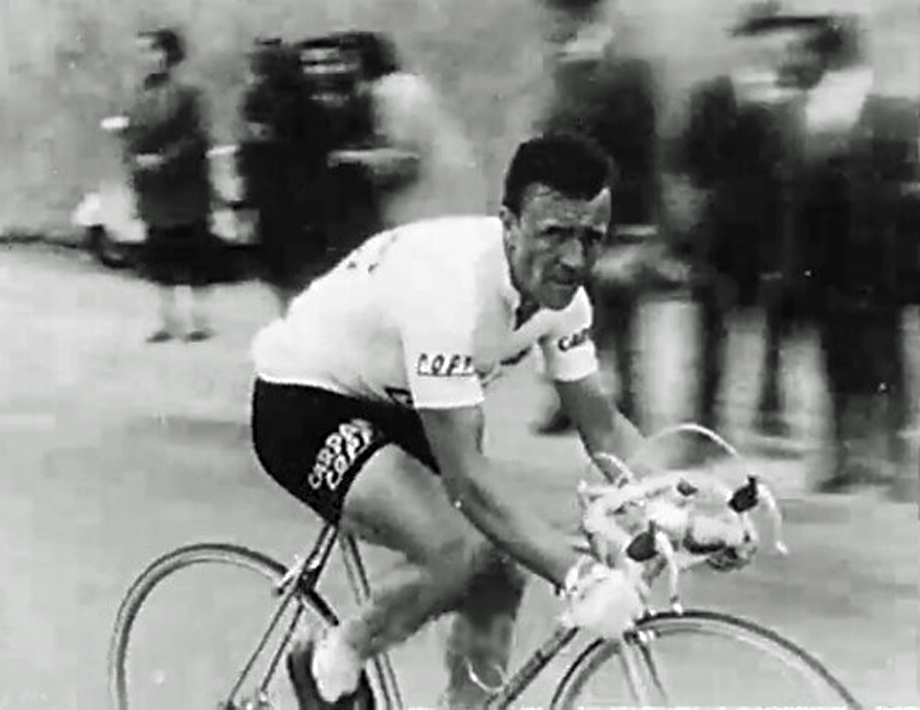 “I was friendly with Poblet and asked him how we should play the sprint; he said that he wanted me to lead-out. That’s what I did, Poblet won and De Bruyne got round me too, so I was third – I wasn’t unhappy with that.” 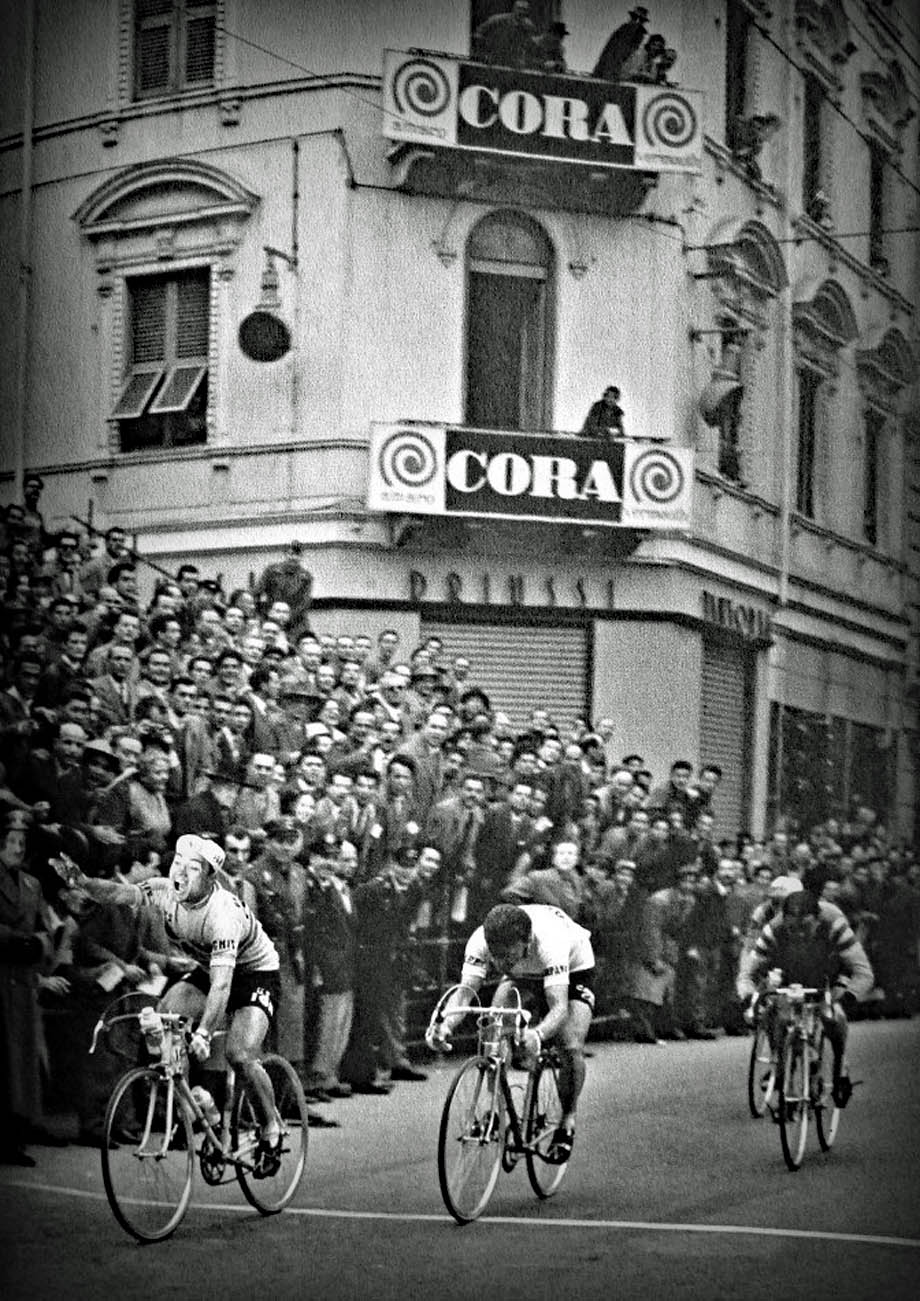 I asked if he had any regrets, it certainly sounded as if he had the legs to do better; “I sometimes think that I should have played my own cards instead of playing them for someone else. If there had been a Poggio back then I would definitely have cleared-off and they wouldn’t have seen me again until the finish. But there were team orders at the time and you can’t turn the clock back, ironically though, the negotiations to get Poblet to join our squad came to nothing, so I should have ridden my own race!” 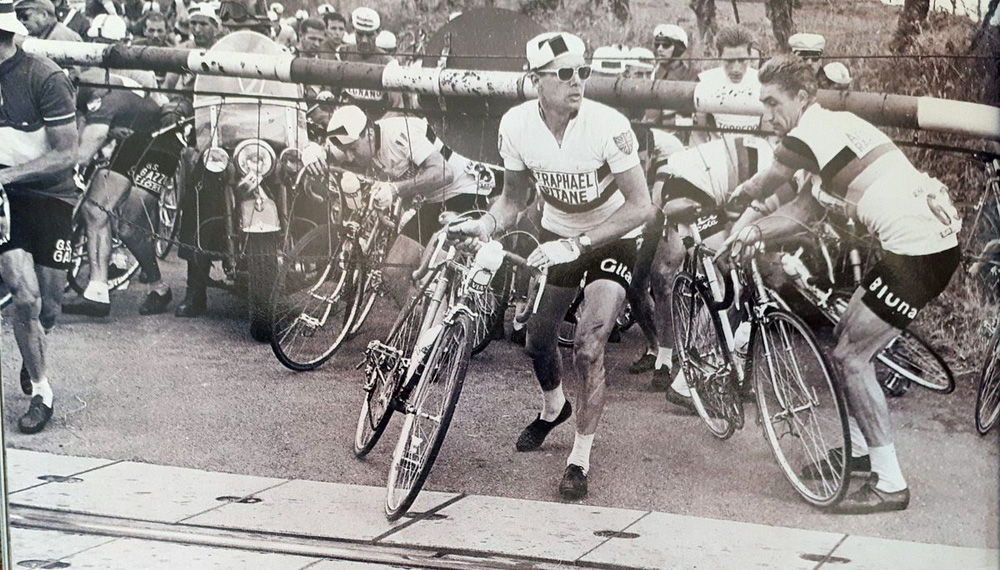 Brian Robinson at a train crossing in the Tour 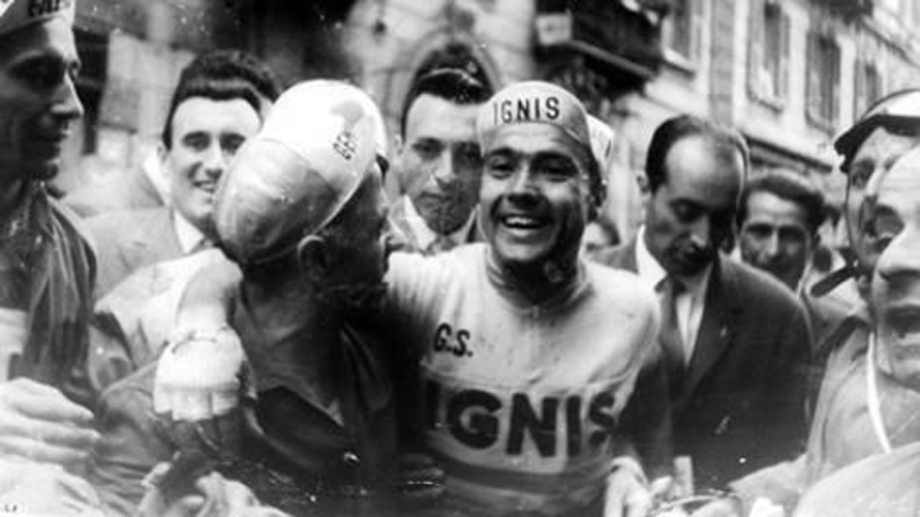 I enquired about the bikes of the day; “My bike weighed 28 pounds – I wish I had the bike I ride now, back then. We always had good equipment so I was on Campag gears and chainset, 46/52 I think, top gear was 52 x 14, only Anquetil rode a 53 ring. The team tyres were French Dourdognes, but I rode Clement 50’s for special races. I used to stock-up on them when I visited Italy, you could buy them cheaper there.” 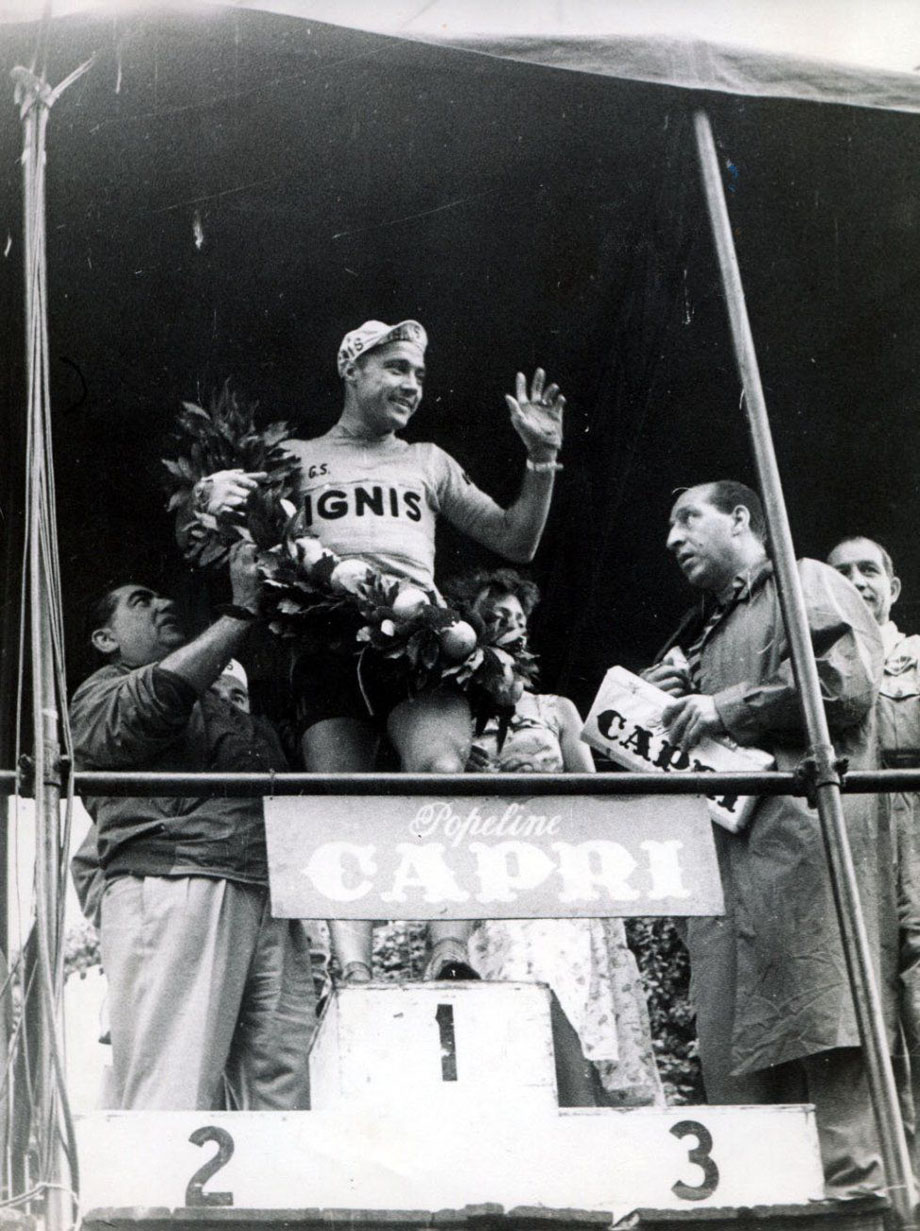 I wondered if there were any souvenirs of that great day; “No, that’s one regret I do have, we didn’t bother to keep trophies and mementos back then.” And, did I say that the morning I interviewed Brian, he had just done three hours on the bike? Sixty plus years-on and he’s still turning those pedals; it’s just a shame that there was no Poggio in 1957.

# Thanks to all the unknown photographers. #