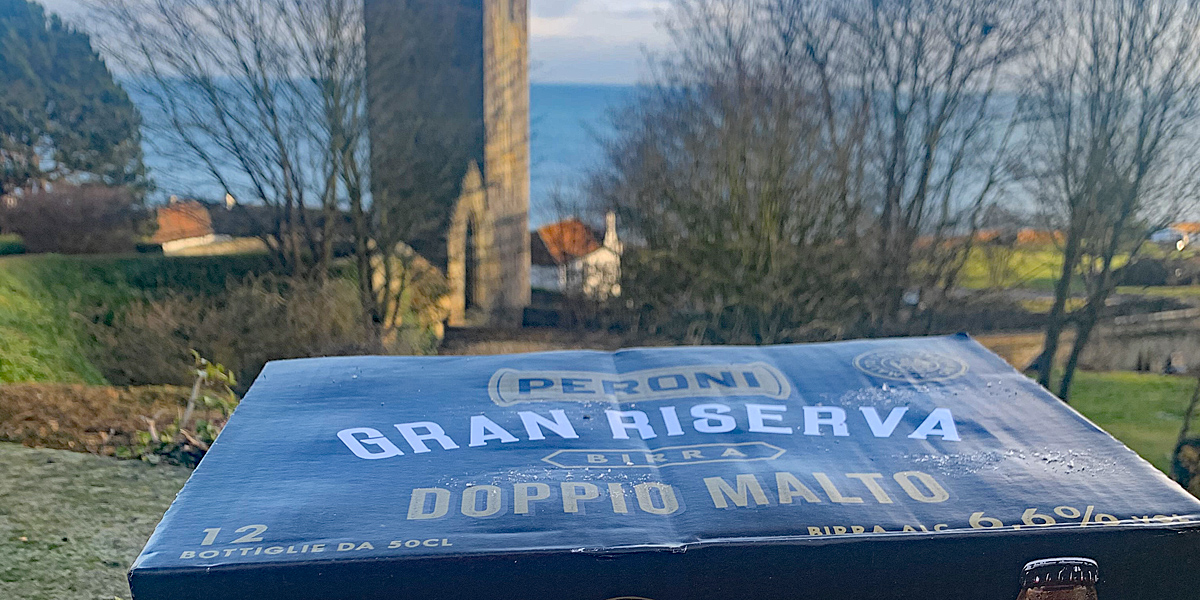 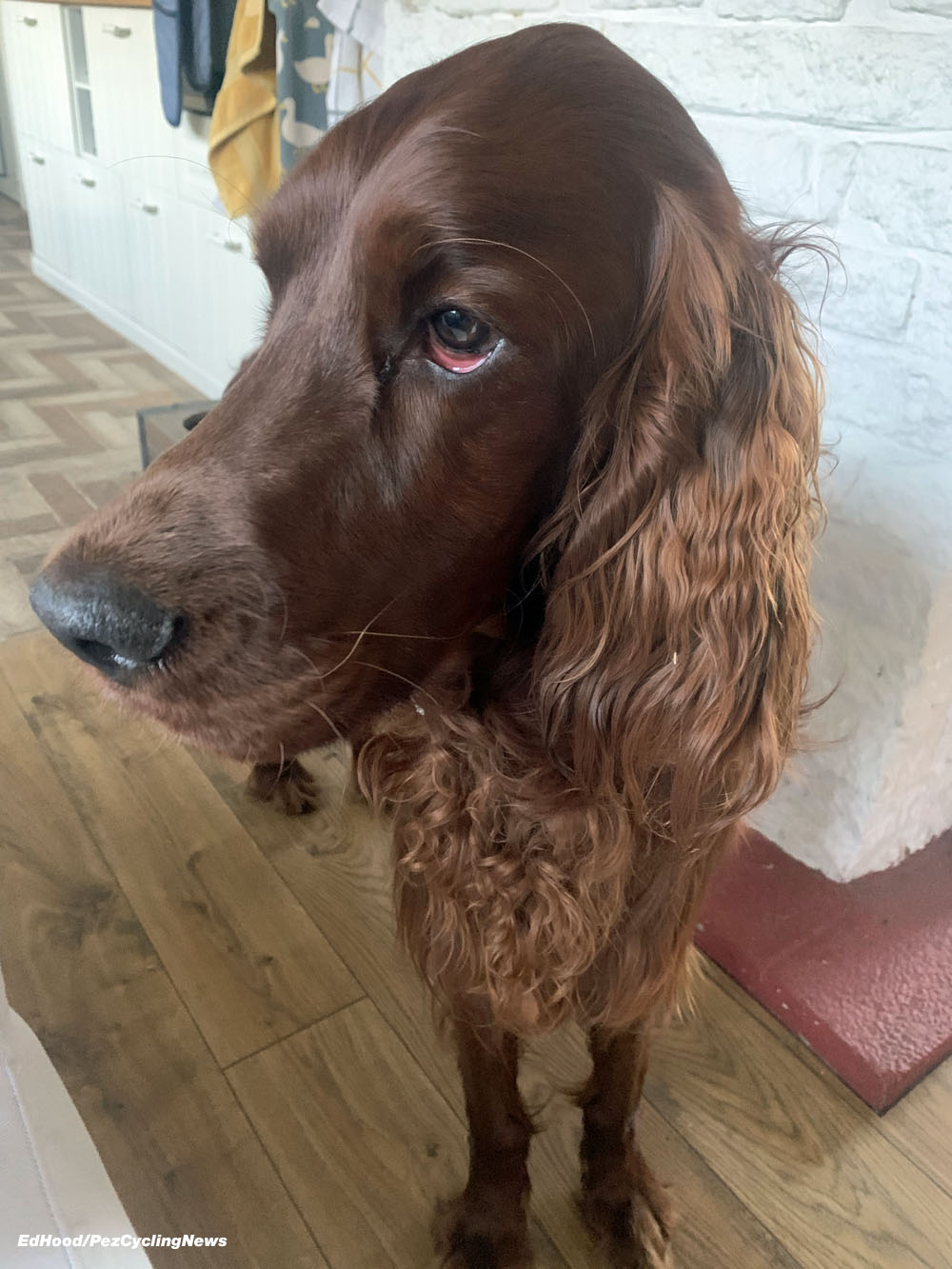 I would have liked to sit and watch from the ‘get go’ but Seoras [that’s Gaelic for ‘George’] slept in for his walk so it was well after 11:00 before I logged in. But I’m a lucky man, I’ve driven those Lombardian Plains back in 2008 in the Saunier Duval team car so I know the lay of the land. 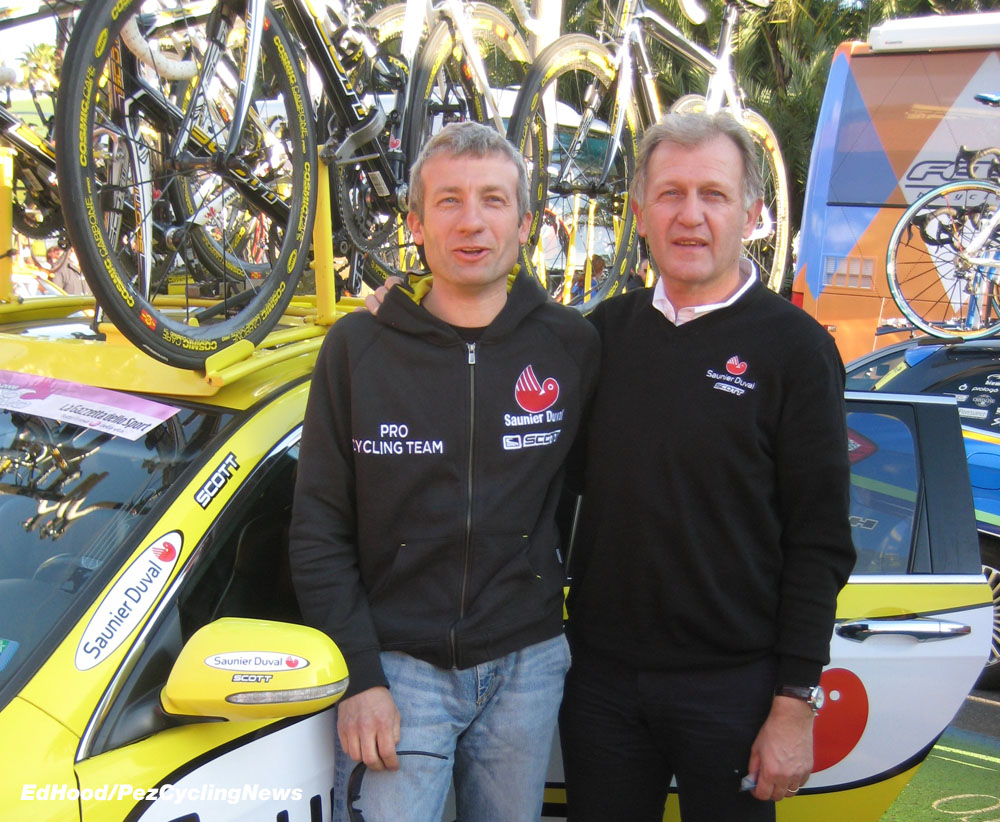 And let me tell you, my hosts Andrea and Pietro were logistical masters; they knew every good snack bar between Milano and the Ligurian Coast – panini, pizza, gelato and that was in addition to the foil wrapped sandwiches they had in the car. But here we are, live and not yet at half distance – time for the first beer of the day. 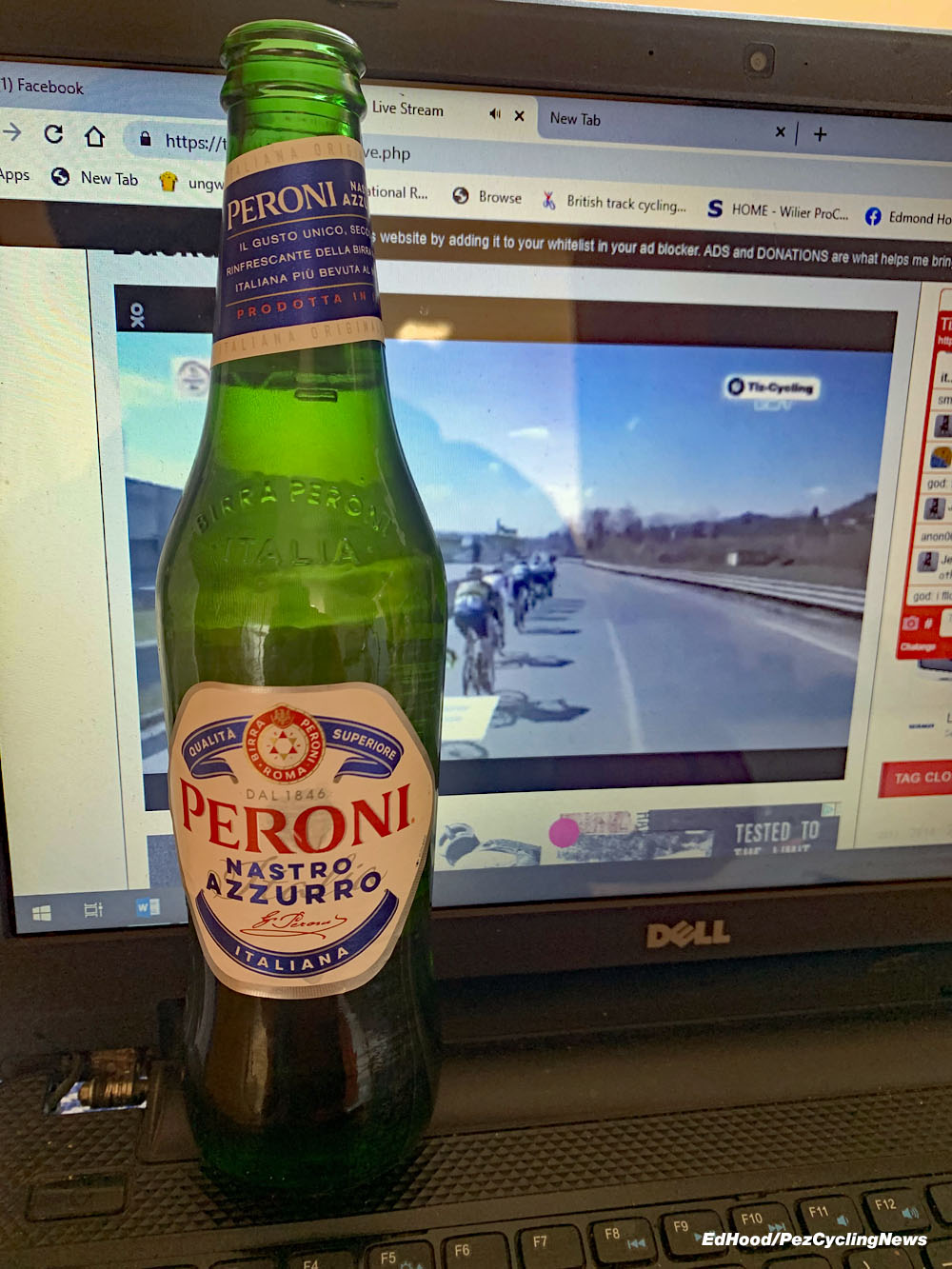 Peroni Nastro Azzurro is a 5.1% alcohol by volume pale lager. Launched in 1963, it’s the Peroni Brewery’s premium lager brand. The name means “Blue Ribbon” in Italian, in honour of the Blue Riband won by Italian ocean liner SS Rex in 1933. Nastro Azzurro has also sponsored teams in Grand Prix motorcycle racing. In a race of this duration pace judgement is all so we’re starting with a nice light beer; there are 160 K to go and we don’t want to black out on the Poggio. Peroni is easy to drink, not a million miles from a Belgian pils; I actually prefer a bit more taste but like I say, ‘pace judgement.’ 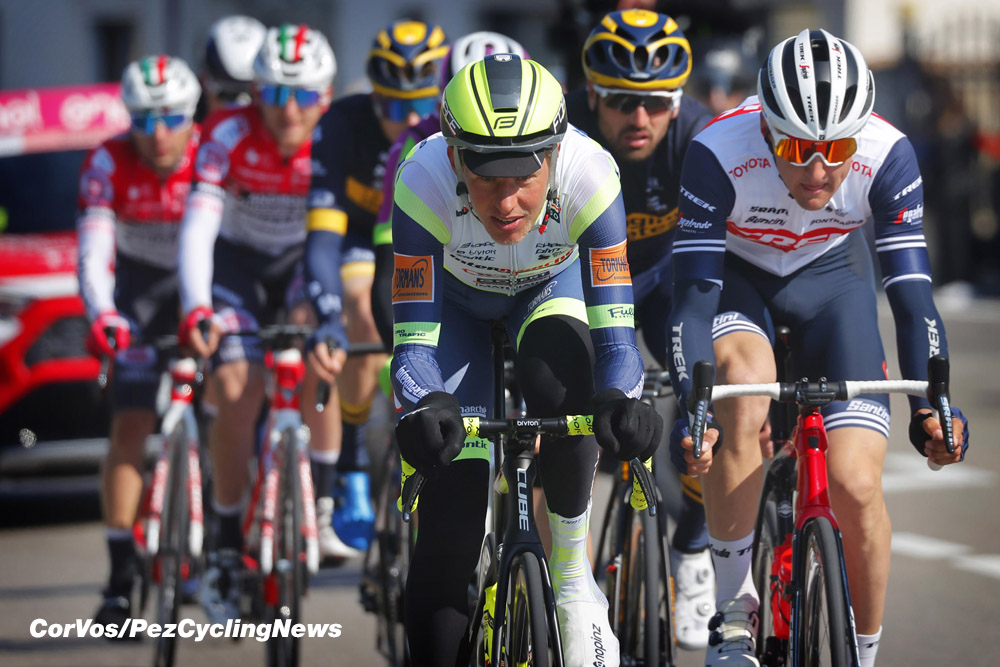 The ‘break of the day’

Let’s talk about that break of eight.
Dutchman Taco Van Der Horn is in there for ever-combatitive Intermarche Wanty Gobert; we spoke to him back at the end of December, no Festive Period for him, big kilometres all the way through Christmas and New Year. He was last to succumb to the rampaging peloton – but 270K out front isn’t a bad shift to put in. There are two Novo Nordisks in there too; folks ask why they bother, they can’t win a Classic or Grand Tour? No, but they demonstrate that young men and women who live with diabetes can compete at the very highest levels; sure, they’re selling a product too but they’re an inspiration and role models. 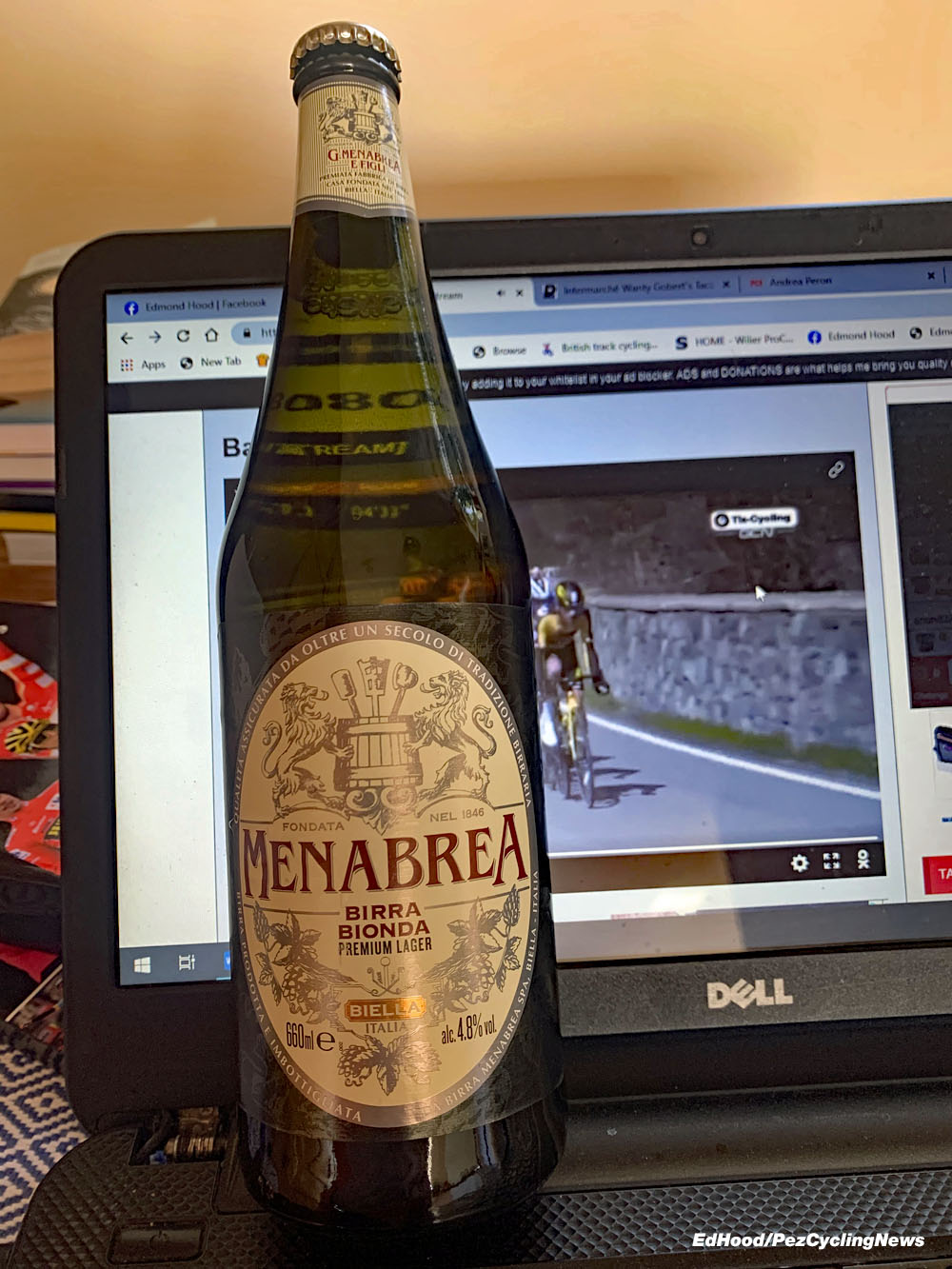 In 1846, Giuseppe Menabrea travelled to the town of Biella, in the foothills of the Italian Alps. There he discovered an underground cave system, ideal for the traditional process of ‘lagering’. Combined with the incredibly pure water and cold fresh air of the region, it was the perfect location to build a brewery. Should you visit Biella today, you’ll still find Menabrea brewing their award-winning beer on the same site, made in the same way, by the same family, with the same ingredients, passion and care. Menabrea is matured gently in the perfect temperature of cave cellars for a taste of superior clarity. This 4.8% ABV pale lager is well balanced between citrus, bitter tones and floral, fruity undertones giving a consistent and refined flavour. It has a complicated malty, hoppy taste with an exceptional head retention due to the quality of ingredients and maturation process. It was my amigo, Paolo Kerr who turned me on to Menabrea; I’ve long been a Peroni man but I think that this brew from Biella just has the edge on flavour. 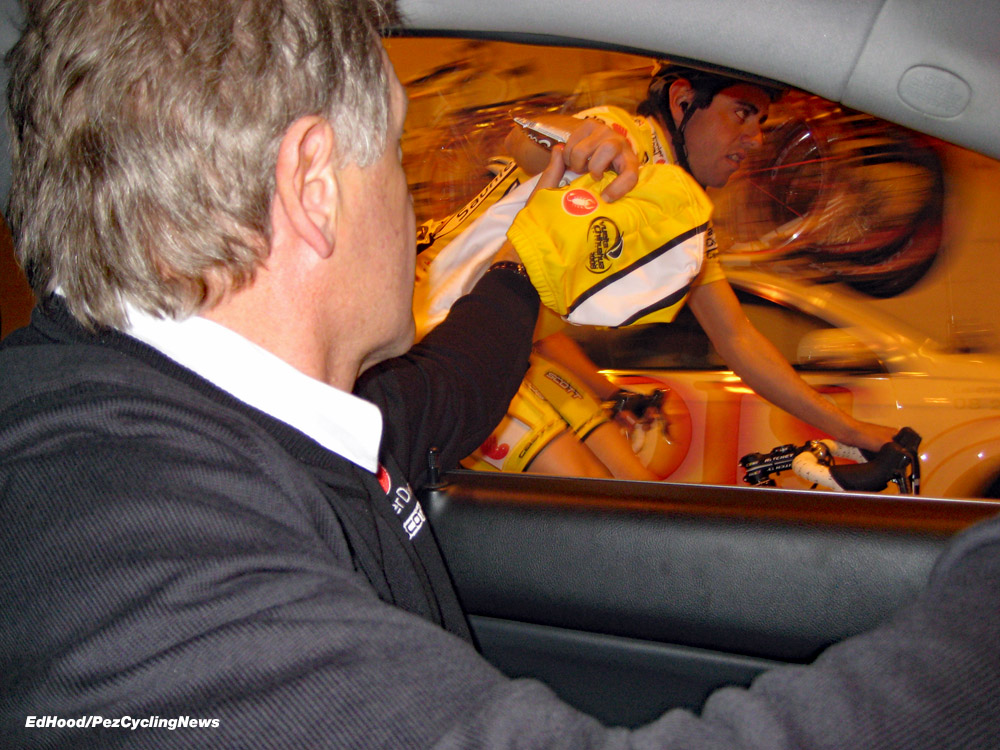 The coast; and the greys and greens of the Plains and coastal hills give way to the bluest of blue that is the Ligurian Sea. There’s a crazy period when they hit the coast road and sunshine where everyone disrobes; over-shoes, leg warmers, arm warmers, gillets all get fired through the windows of team cars. 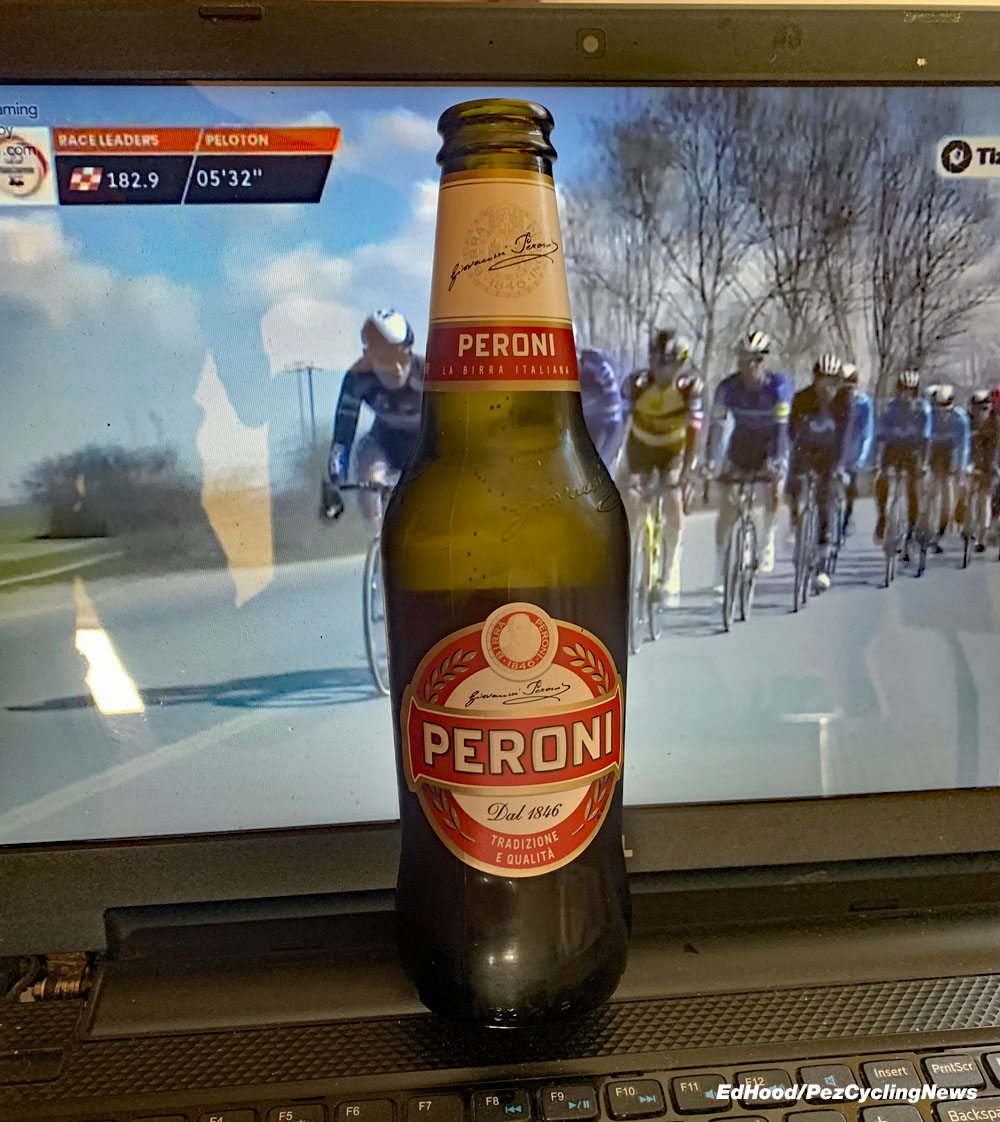 Said to be the number one selling beer in Italy, unlike the famous Peroni Nastro Azzuro, the red labelled Peroni offers a slightly darker colour with more pronounced malty and hoppy characteristics. The red edition has plenty of fruity and floral notes with clean and smooth finish. It’s tastier than the blue label but not an awful lot different to my palate, if truth be told. 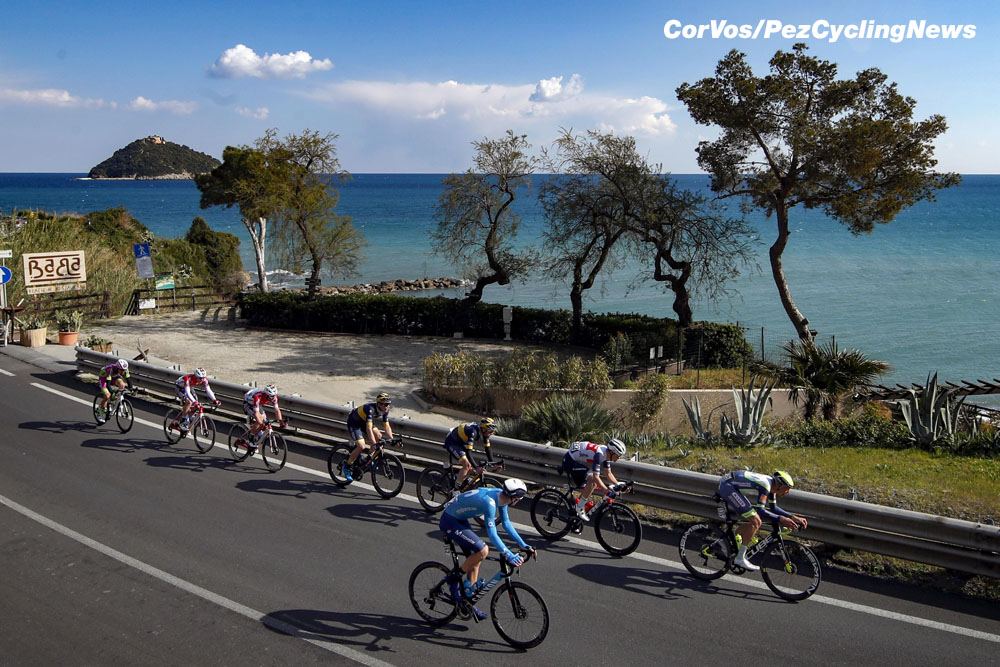 The coast road and what you don’t see on the TV is that the bunch doesn’t just smoothly bowl along those early coastal kilometres, rather it surges, super-fast then eases as the ‘Bigs’ feed and/or take a comfort break. There are splits and as those behind catch up it surges again; no easy food or comfort break for them – that’s why you must ride at the front in this, of all races. 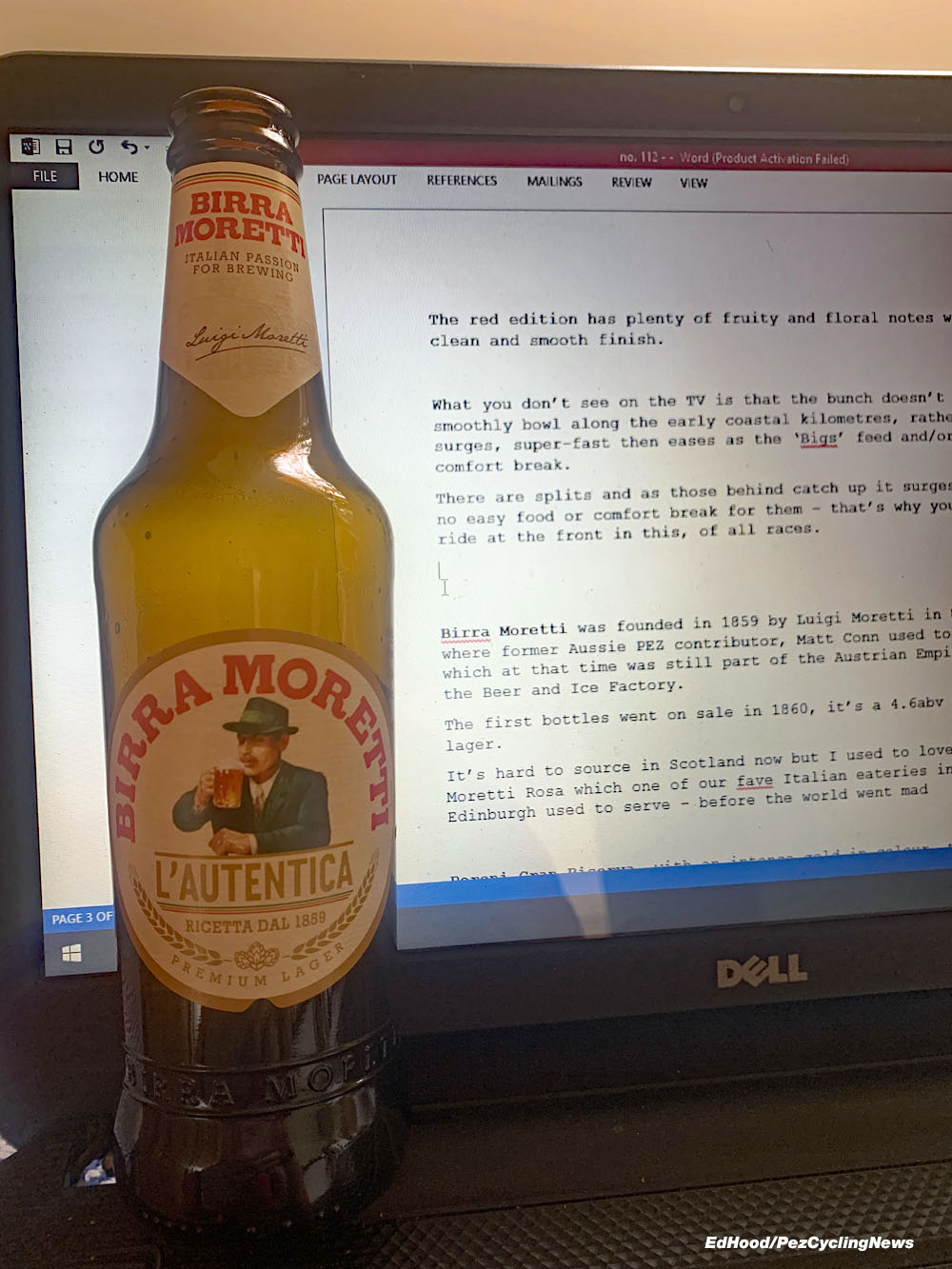 Birra Moretti was founded in 1859 by Luigi Moretti in Udine, – where former Aussie PEZ contributor, Matt Conn used to live – which at that time was still part of the Austrian Empire, as the Beer and Ice Factory. The first bottles went on sale in 1860 of this 4.6abv pale lager. It’s hard to source in Scotland now but I used to love the Moretti Rosa which one of our fave Italian eateries in Edinburgh used to serve – before the world went mad. 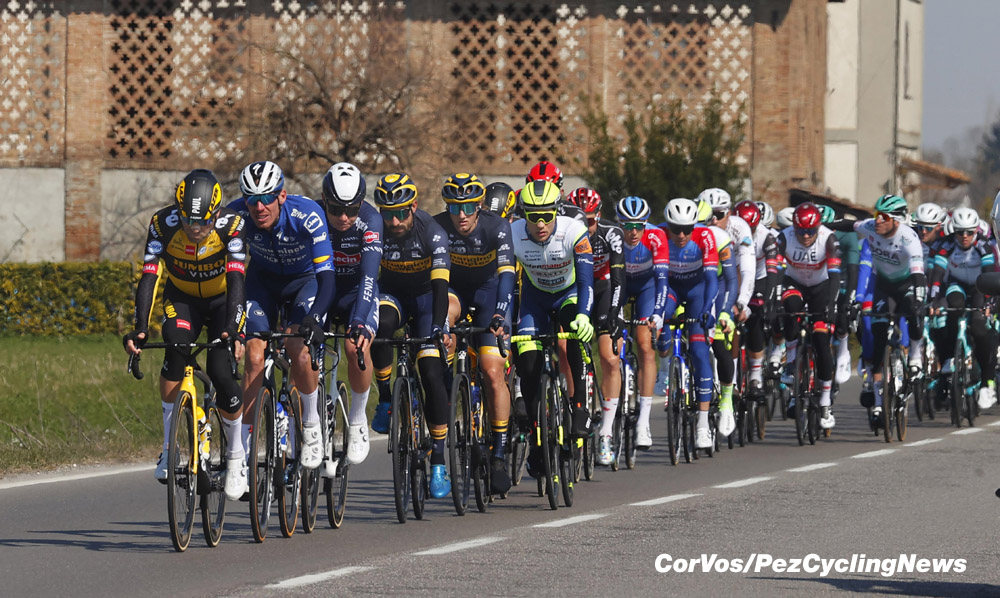 Tim De Clerq, what can you say about the man, he’s been on the front ALL DAY; ‘Domestique of the Year’ in the Belgian ‘Kristallen Fiets’ awards, small wonder. ‘Alassio’ says the sign, 60K to go and the finale looms with seven left up front as behind the ‘Bigs’ move up but still. ‘Tim the Tractor’ dictates the pace. 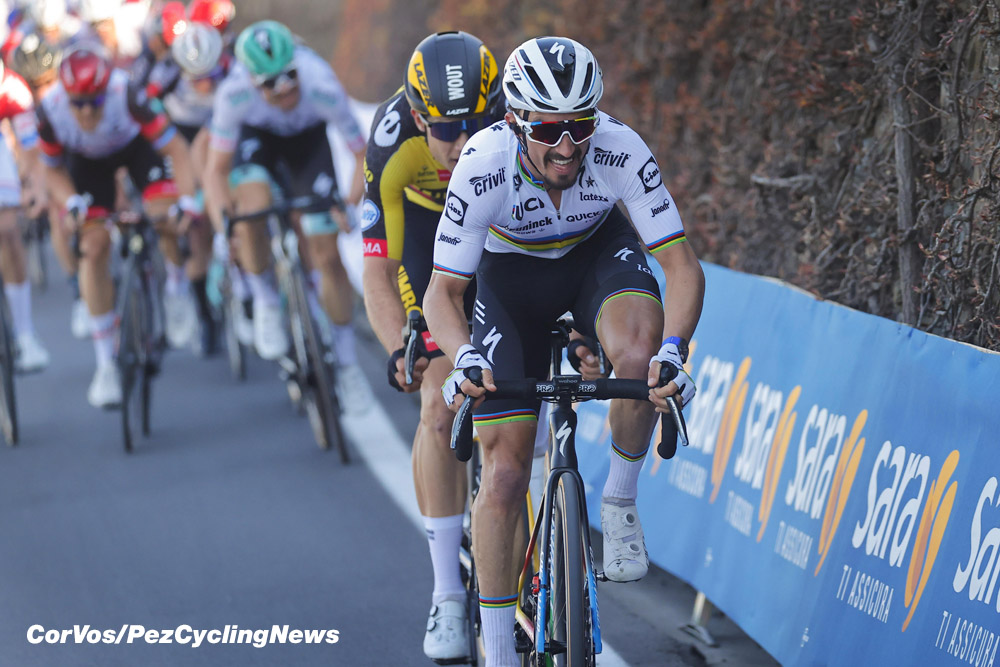 The World champion gave it a go on the ‘Capi’

The ‘Capi:’ in the team car you hardly notice them but 250K in they’re just another part of the process of erosion. The Cipressa: and cliché time; ‘you can’t win the race here but you can certainly lose it,’ I used to watch with sadness as Super Mario slid backwards here, until 2002, that is – and it was never a fun climb for Cav, either. Today it was the turn of Elia Viviani – what HAS happened to that man? and Fernando Gaviria – illustrating that two doses of Covid aren’t easy to shrug off. . . 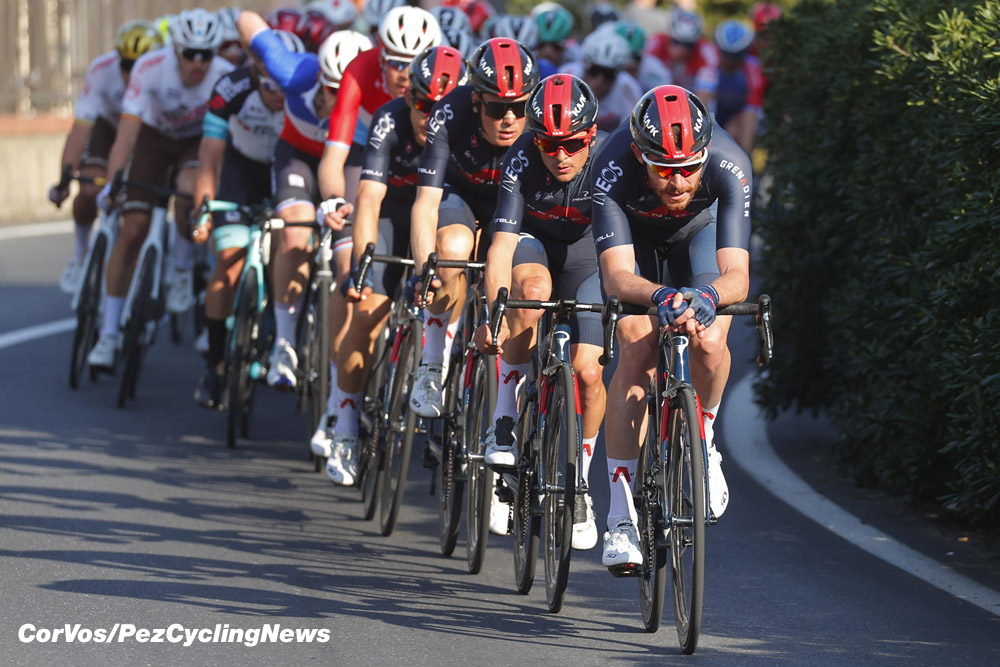 Off the Cipressa and back to the madness of the coast road it was Ineos on point and tiny Tom Pidcock demonstrating once again that he is ‘special,’ just 21 years-old, 1.57m and 58kg. – well to the fore over and down the Poggio. 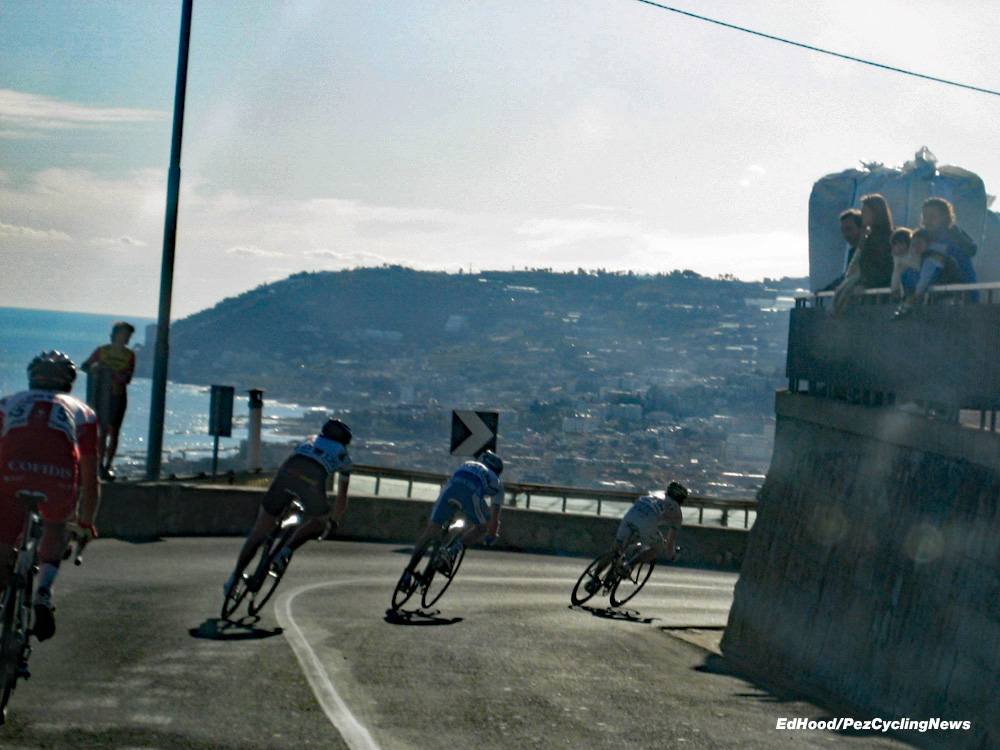 The Poggio, just a nondescript piece of road – but every March it becomes Holy Ground and calls for a special birra. . . I was perhaps a tad optimistic laying down a case of the stuff for today – but one can’t be too careful. . . 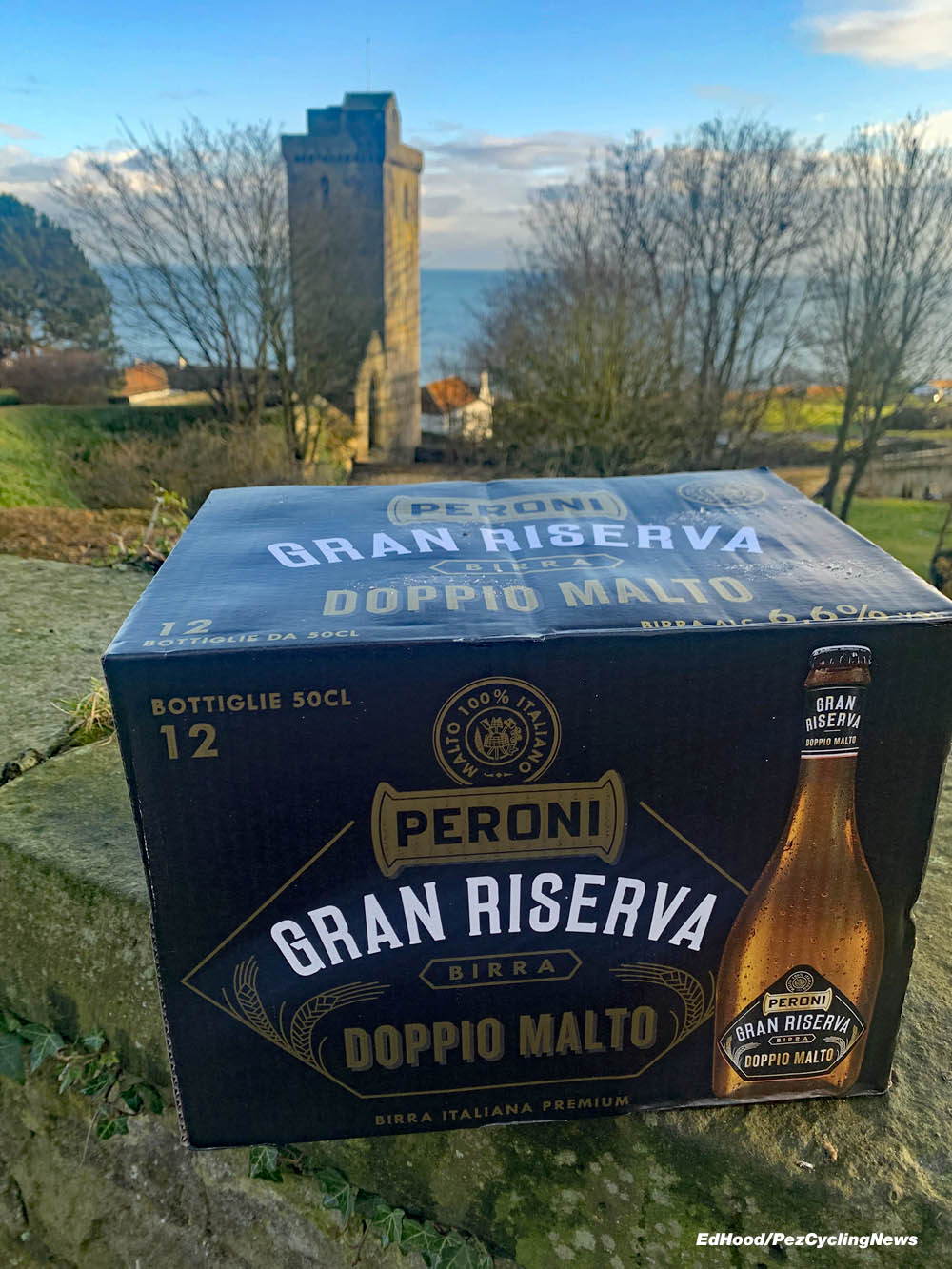 Peroni Gran Riserva, with an intense gold in colour, the aroma of cereals, toasted malt, spices with a delicate fruity aftertaste – ABV of 6.6 percent Alcohol – definitely my favourite of the moment, albeit the Bacchus Framboise will be put for de Ronde. 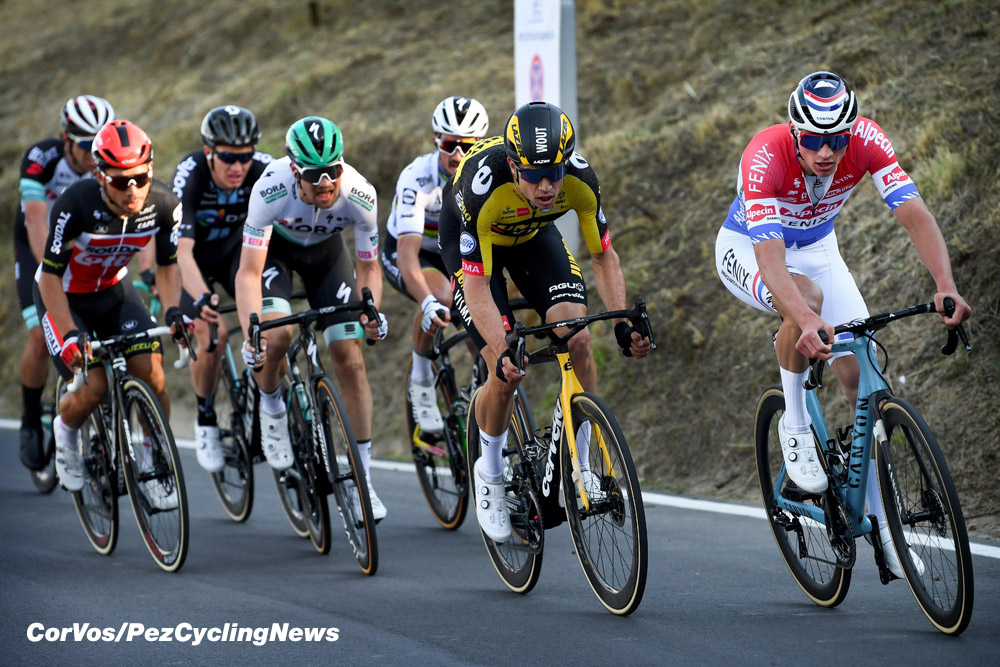 What happened to the, the Three Wise Men, then?
‘Ala’ couldn’t make the difference on the Poggio; MVDP didn’t look the same raging bull we saw in Tirreno; and Wout was out-foxed by a Stuyven who;

“just knew I had to try, all or nothing. I prefer to do this than gamble for the sprint and finish in fifth or 10th place, so I prefer to go all-in. Most of the time it’s nothing; sometimes it’s all, and today it was all.”

‘All’ indeed – and respect to another of the ‘little people,’ Caleb Ewan who was where he should be all day but also lost out to Jasper’s roll of the dice. The big Belgian is a nice guy, I had the pleasure of interviewing him at le Tour, a year or two ago and found him to be humble, grounded and very easy to speak to.

And, yes, I should really have had a grappa to round the day off – but I’m sadly not young anymore. . . 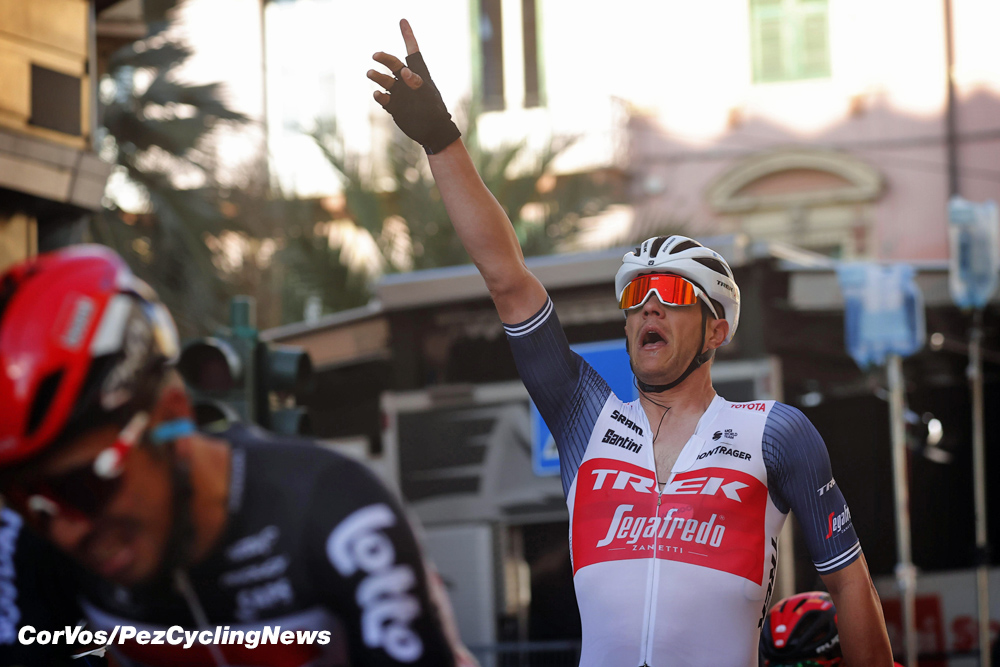 Postscript:
I know I had all that good Italian birra down me so maybe, as PEZ soothsayer Vik is wont to say; ‘I was wearing rose tinted glasses,’ but I still think it was a great race with an epic final. Vik however thought that he couldn’t endorse a Monument where Caleb Ewan was second. Ace photog and pundit, John Pierce reckoned; ‘Race too long or are they all falling asleep? A bit deplorable when riders of that stature take riders like Ewan and Sagan to the line.’ But I think former Gent-Wevelgem and eight times Tour de France stage winner, Barry Hoban summed it up best; ‘Sheer Speed – too fast to do a real attack – and too many riders at the bottom of the Poggio – too many watch and wait!’ 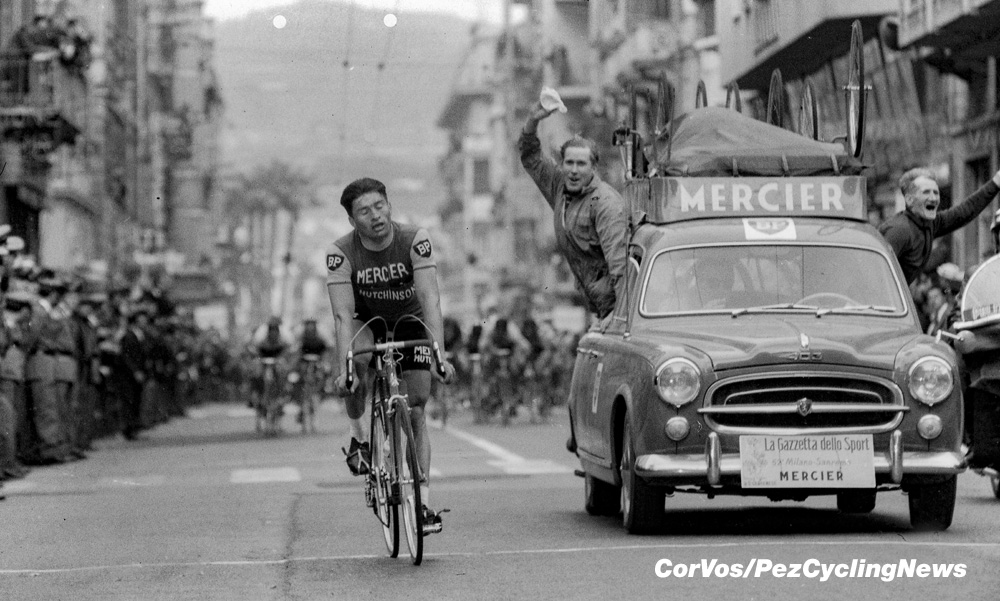 But not Jasper.
Thank you Mr. Stuyven for writing another page in the epic saga that is, ‘The Primavera.’ 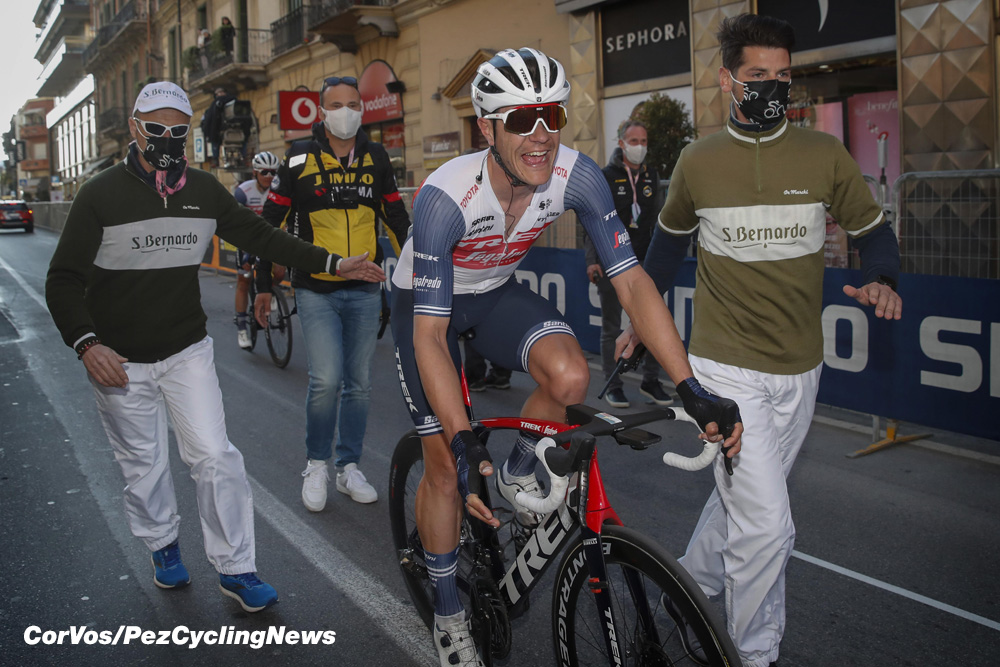