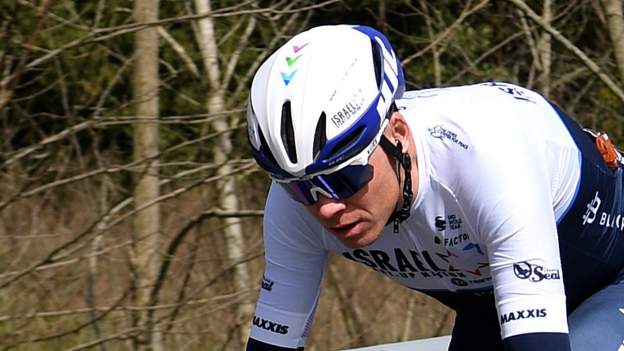 Chris Froome finished more than eight minutes behind the peloton on the first stage of the Volta a Catalunya.

The four-time Tour de France winner, 35, is searching for form with Israel Start Up Nation before the 2021 Tour.

Stage one winner Andreas Kron of Lotto-Soudal leads the peloton by 16 seconds.

Britain’s Froome lost touch with the main peloton with around 60km still to go of the week-long race’s opening 178km stage to and from Calella, on the Catalan coast near Barcelona.

His new team still have Ireland’s Dan Martin as an option to try to the win the general classification.

Froome has struggled for form since suffering multiple injuries in a crash during the Criterium du Dauphine race in 2019 as he prepared for that year’s Tour.

He has suffered several setbacks since, including Ineos deciding not to renew his contract last season and a loss of form as he tried to recover from his injuries.

He reported earlier this year he was suffering discomfort from one of the screws inserted into his injured leg while competing in last year’s Vuelta a Espana, and also said during February’s UAE Tour: “I definitely need more of these races behind me.”

Froome is hoping to become the joint most successful Tour de France rider in history by winning a fifth event this year, with the race scheduled to start on 26 June.

Ineos said in February they intend for Thomas to contest this year’s Tour.