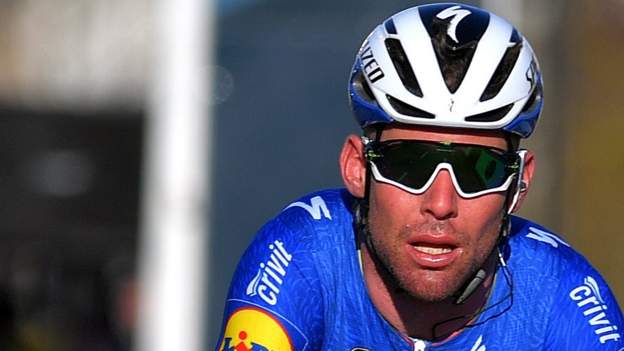 Britain’s Mark Cavendish has continued his improved form, leading the general classification in the Coppi e Bartali race in Italy.

The Deceuninck-Quick Step rider was second in the first of two stages, but took the lead after a team time trial.

In Tuesday’s second stage of the Volta a Catalunya, Ineos Grenadiers’ Adam Yates was eighth in a time trial won by team-mate Rohan Dennis.

Cavendish’s runner-up spot comes just two weeks after a second in the GP Monsere, in Belgium, which was his highest-placed finish since June 2018.

He missed out on victory after crossing the line just behind Italy’s Jakub Mareczko of Vini Zabu.

The team time trial, held just after the opening stage, was won by an Israel Start Up Nation team including Britain’s Alex Dowsett.

Cavendish took the lead after Quick Step finished ahead of Vini Zabu, in third.

The 35-year-old, one of cycling’s most successful sprinters with 30 stage wins in the Tour de France and 151 victories in his career, joined Deceuninck-Quick Step for 2021.

He ended last October’s Gent-Wevelgem race in tears, saying that he felt his career could be over.

In the Volta a Catalunya, Dennis won the 18.5km time trial in Banyoles with a time of 22 minutes 27 seconds.

On a course full of undulations and a frantic downhill finish, the Australian former time trial world champion left not an inch to spare on the road and risked being thrown off his bike over some sections.

Yates’ eighth place, 35 seconds behind Dennis, was a strong performance for a rider not thought to be one of the world’s best time trialists, leaving him fourth overall just seven seconds down.

Of the top British riders, Yates, 28, has shown the strongest form of the season so far, with second place overall in last month’s UAE Tour despite a heavy crash.

Fellow Ineos rider and 2018 Tour de France winner Geraint Thomas was 10th and lies seventh in the GC, 19 seconds down.

Four-time Tour winner Chris Froome was 79th for Israel Start Up Nation, two minutes five seconds down after Monday’s disappointing opening stage when he lost more than eight minutes to the peloton.

Froome has struggled for form since suffering multiple injuries in a crash during the Criterium du Dauphine race in 2019 as he prepared for that year’s Tour.

He is hoping to become the joint most successful Tour de France rider in history by winning a fifth event this year, with the race scheduled to start on 26 June.