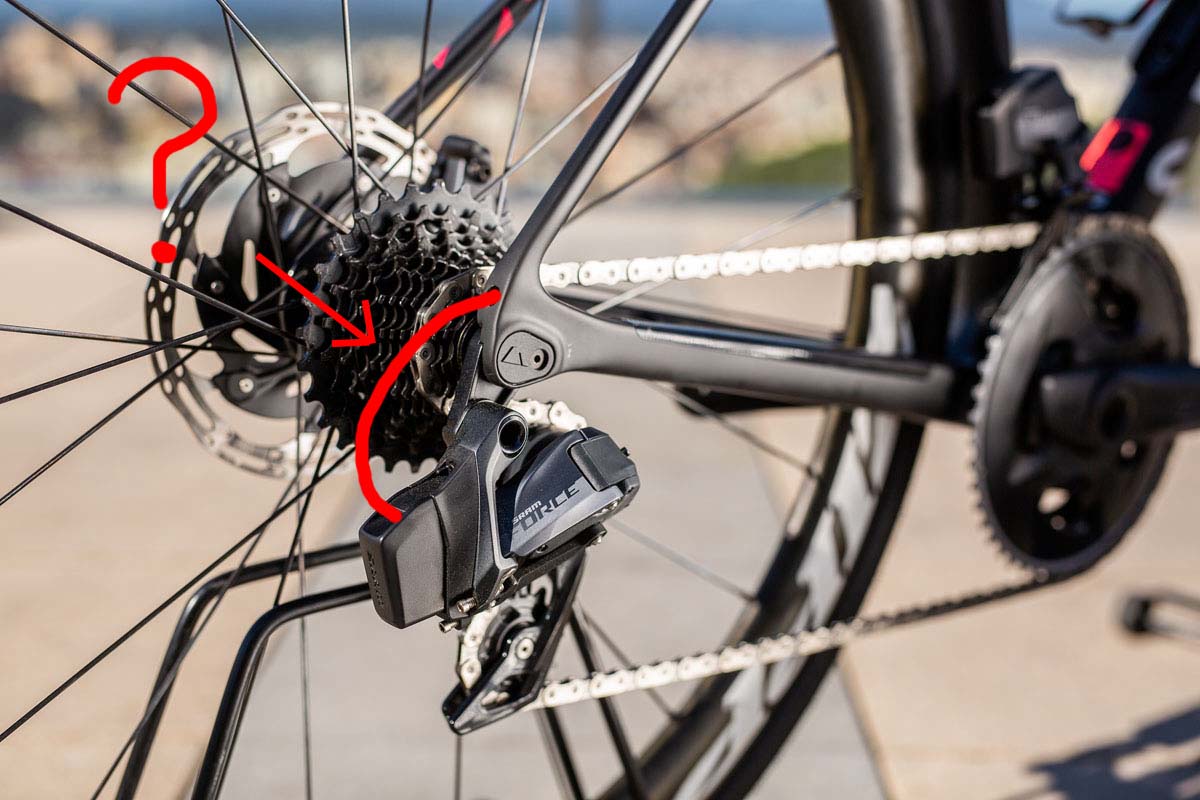 As Shimano flirts with its own wireless drivetrain, SRAM appears to be heading in the opposite direction. In today’s Patent Patrol, SRAM has filed a patent to add wires to its eTap components. That’s right, eTap Wired could be in the works.

Why would SRAM want to do that? It’s all about the size of your battery, friends.

eTap certainly staked its claim as a top contender among road drivetrains. And for good reason: eTap makes it easy to set up your drivetrain out of the box. And recharging the batteries is simple. Just pop them off the derailleurs (or other components powered by the nifty little batteries) and throw them on a charger. No need to run a charging cable from a wall outlet to the bike itself.

The drawback, however, is that SRAM’s eTap battery life doesn’t seem to be as consistently long as its competitors.

By attaching wires to the existing derailleur battery ports, it appears SRAM is attempting to address that concern. But eTap Wired (my name, not SRAM’s!) is primarily an adaptation that takes advantage of e-bike batteries.

E-bikes obviously have massive batteries already built into the bike. In such a case, eTap’s batteries seem superfluous. With the invention outlined in this patent, SRAM appears to be taking advantage of the massive power source already integrated into an e-bike in order to power the drivetrain components.

Simply pop out the existing batteries and exchange them for the eTap Wired adapter. It pops right into the existing ports on the derailleur and snaps into place the same way you would snap your battery into place.

From there, the system taps into the e-bike’s battery to power the derailleurs. On top of the massive power potential, it also seems SRAM is allowing e-bike manufacturers to integrate the shifting information into head units. That means perhaps you’ll be able to monitor battery life and see what gear you’re in, among other nifty information.

With so many e-bikes hitting the market, and the sales potential for them exploding, it shouldn’t seem surprising that such integrations are becoming more vital. E-bike riders will see new technologies integrate into their rides in coming years. And this eTap Wired system looks like a good example from SRAM.

Allowing integration into an e-bikes existing computer may allow e-bike manufacturers to integrate the shifting into the bike itself, for example. In other words, the bike may be able to do the shifting for the rider, since the eTap components will tap into the bike’s battery and computer.

If eTap wireless systems were integrated into the same e-bike, it appears from the patent that SRAM has concerns the wireless communication would be difficult to encrypt for privacy and safety. That’s because it would become necessary to individually encrypt each system — for every e-bike manufacturer that wanted to use eTap on its bikes.

SRAM solved the encryption problem on its eTap system by creating its own wireless protocol, Airea. But that’s one protocol for every eTap drivetrain. In order to translate eTap’s wireless system to individual computers, SRAM would have to come up with encryptions for each one. That’s a massive undertaking that’s likely not feasible for SRAM or e-bike manufacturers.

Based on other patents, it seems Shimano is also playing the adaptation game. A wired system that has the potential to go wireless appears to be in the works — or at least Shimano has filed patents to that effect.

It’s possible then that Shimano has identified the same issue that SRAM has. SRAM’s eTap wired solution, outlined in this patent, allows a user to configure eTap as either a semi-wired system or a wireless system as it exists now.

That’s to the massive benefit of riders going forward as e-bikes become more common. Yet such options also open up other design possibilities, even for non-e-bike riders.

Think about that multi-day trip, or the all-day gravel race. SRAM’s eTap system probably has enough juice to get you through those. But for peace of mind, wouldn’t it be nice to have a larger battery that you know will be enough to get you through? Enter eTap Wired.

Of course, it sure would be nice to ditch the added weight and complexity of a wired system for your one-day race or your daily training rides. And boy, it sure is nice to swap batteries from the front to the rear derailleur should one die on a ride. Never fear, eTap wireless to the rescue, all on the same system as your eTap Wired system!

Of course, this is all conjecture. For now it seems SRAM’s patent outlines an eTap Wired system intended to take full advantage of massive e-bike batteries. But there are oh so many possibilities for applications outside of e-bikes. Either way, exciting things seem to be on the horizon for drivetrains.