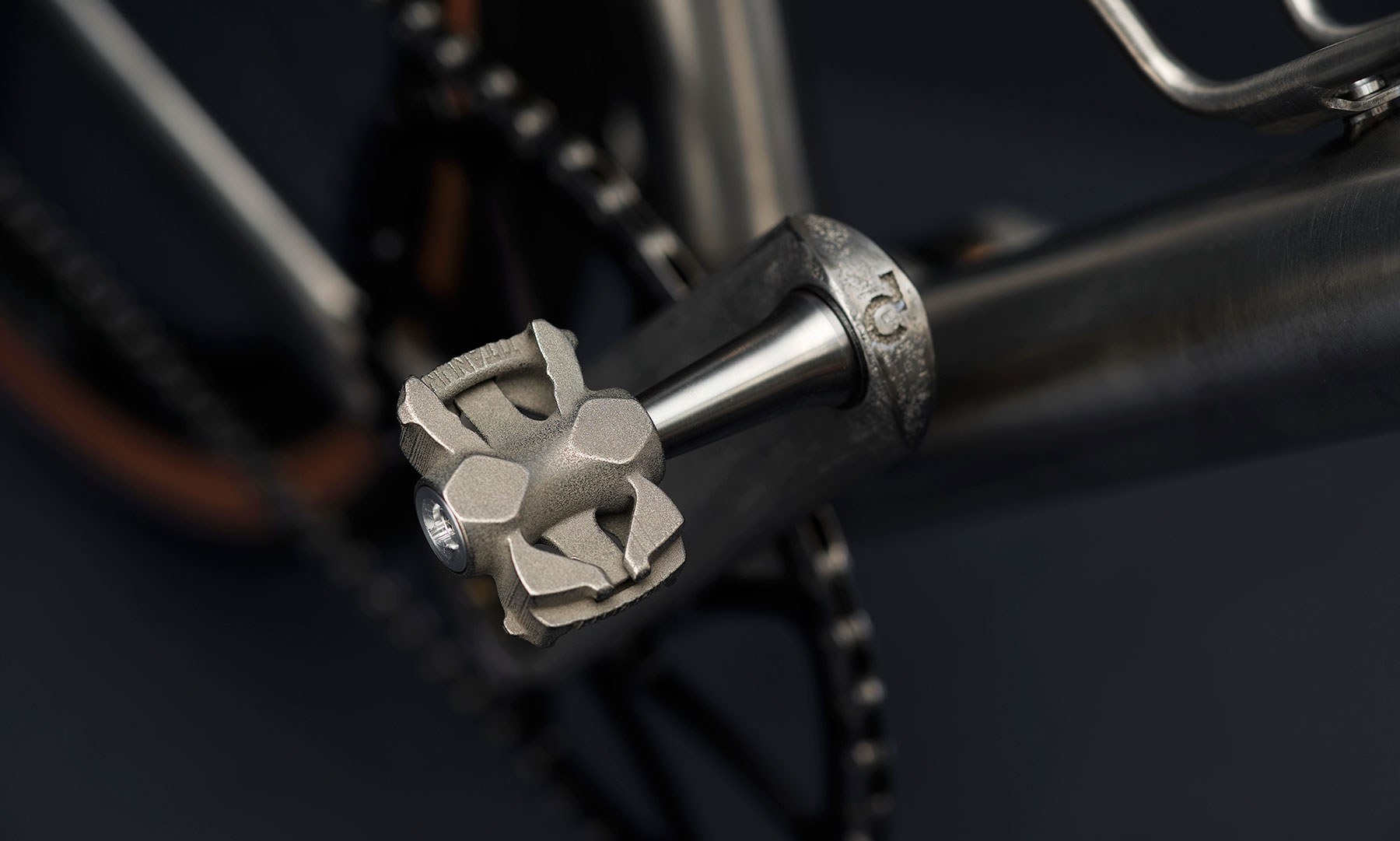 How do you make a lighter clipless pedal? Start with titanium. Or more appropriately, 3D printed titanium. That’s the approach of Titanum, at least. Citing the need for fewer parts with fewer failure points, the pedals can be lighter while while claiming to be stronger as well. Better still, Titanum claims their MyTi dual sided clipless pedal is optimized for both road and MTB use – and everything in between.

Partnering with a fellow German based company, Titanum enlisted the services of Element 22 to take advantage of their “patented, cutting edge sinter-based Additive Manufacturing processes.” According to Titanum, “Titanium (atomic number 22) is made in alloys that are nearly 2x stronger than typical strong aluminum alloys, and component made from Ti6Al4V saves about 40% weight compared to a steel equivalent. Therefore, Ti6Al4V has a better strength-to-weight ratio than either, which aerospace and aviation industries often use to reduce weight but maintain strength.”

Calling it their “Blattfeder technology,” the MyTi pedals rely on a patent-pending titanium leaf spring design which effectively eliminates moving parts for the retention mechanism. The Blattfeder name “refers to the horizontal ‘backstop’ spring that MyTi pedals use during clip-in. During clip-in, a so-called T-piece on the front of the cleat moves forward through a slot, and that pushes the blade spring down until a point whereupon the spring jumps back up in place. The blade spring then becomes a backstop that prevents the cleat from sliding backwards, to remain secured.”

The result is a pedal that can only be released by twisting your foot to the side – not from pulling up. The cleat has about 6° of rotational float, and releases at an “angle of less than 14°.”

The design also results in a super low stack height of just 7.3mm. To keep the bearing assembly thin, the pedals roll on needle bearings.

Early prototype cleats include both two bolt cleats for MTB use and four bolt cleats for road use. Titanum says that they are also working on three bolt cleats to truly cover all the bases. Production cleats will likely also be made from 3D printed titanium.

Pedals will be offered in the MyTi Ultra or MyTi R which differ in terms of the axle material. The Ultra uses a titanium axle to get the weight down to just 100g per pair, while the R gets stainless steel axles for a stiffer spindle that’s better for heavy duty use. That comes with a sight weight penalty bumping them up to 140g per pair, which is still impressively light. Note that Titanum’s claims of this being the lightest pedal refers to a dual sided clipless pedal. There are lighter single sided pedals out there, but we’re drawing a blank on any dual sided pedals less than 50g – especially if you include the cleat, which Titanum claims will only add +/- 46g to 54g per pair.

While still finalizing some of the details, Titanum just went to Kickstarter to launch the Mytis. Titanum expects the MSRP of the MyTi Ultra to be around €369, with Kickstarter pedals starting at €277 for the Early Bird deals. If all goes according to plan, Titanum expects to start shipping pedals by May.