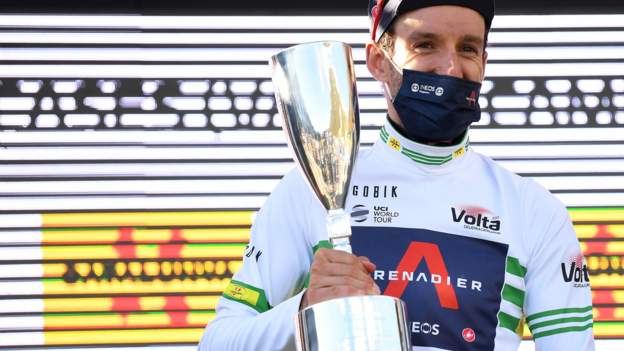 Ineos Grenadiers’ Adam Yates has taken the lead of the Volta a Catalunya after an impressive victory on stage three.

Britain’s Yates, 28, powered up the final 5km in the Pyrenees alone after a number of riders tried to break away from the peloton.

“[Richard] Carapaz was in front; I was hoping to bridge, but in the end I had momentum and the speed to go past, so I went past and had [Sepp] Kuss and Alejandro Valverde with me, but managed to drop them,” he added.

It was a much-improved performance by three of the many British riders at this race, as they prepare for a busy season which includes three grand tours, world championships and the prospect of competing at the Olympics.

Ineos were a strong presence in the peloton all day, with Ecuador’s Carapaz doing the earlier attacking up the final climb of Wednesday’s huge 203km stage from Canal Olimpic de Catalunya to Vallter 2000 on the French border.

But it was Yates who was strongest, burning off Carapaz before hauling in Movistar’s Valverde on his way to the summit.

Of the top British riders, Yates has shown the strongest form of the season so far, with second place overall in last month’s UAE Tour despite a heavy crash and his unexpectedly strong showing in Tuesday’s time trial.

However, it is fellow Ineos rider and 2018 Tour de France winner Geraint Thomas who is currently expected to contest this year’s Tour de France instead of Yates. And, as if that status needed cementing, the 34-year-old showed one of his strongest performances of the season to finish close behind.

Thomas is now fourth in the general classification, 53 seconds down.

Yates, as things stand, has been marked down to try to win this year’s Vuelta a Espana in September, a race where EF Education-Nippo’s Carthy finished third in 2020.

The Deceuninck-Quick Step rider beat Jasper Philipsen of Alpecin-Fenix and Pascal Ackermann of Bora-Hansgrohe in a bunch sprint to the line after 204km of racing.