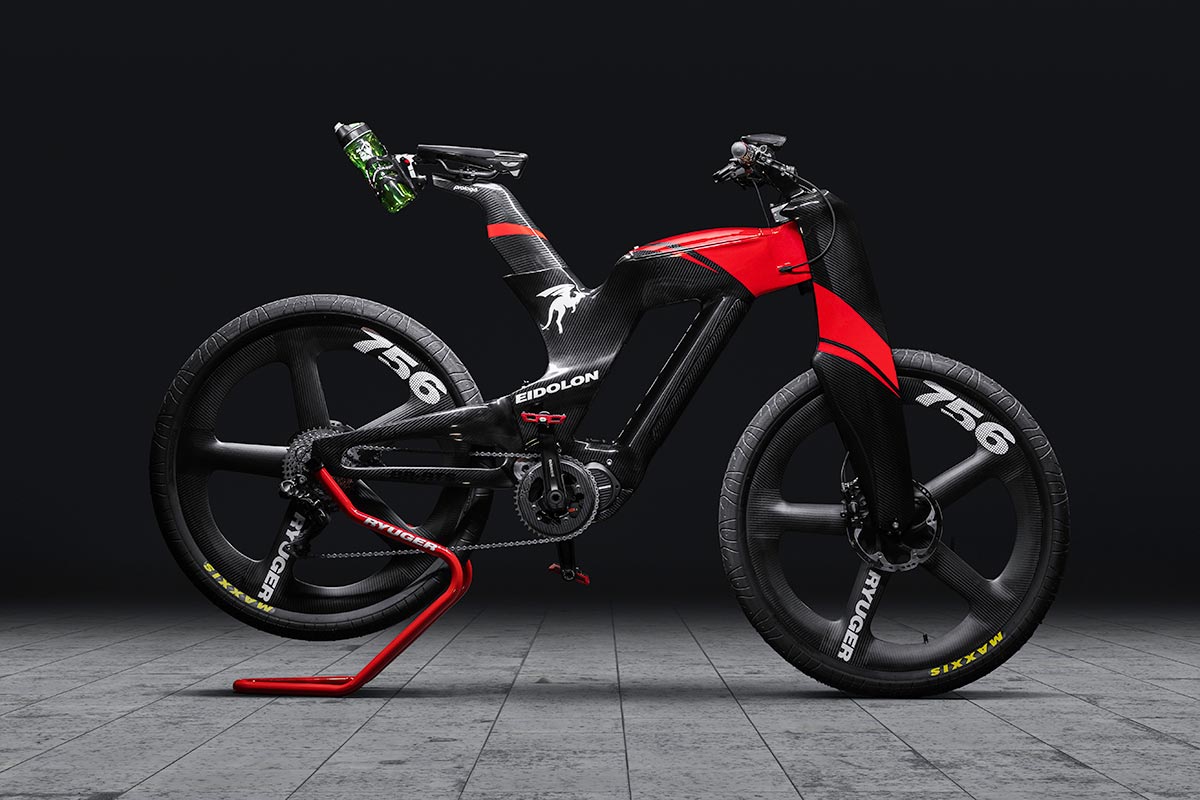 Dear me, there’s a lot to unpack here. Australian brand Ryuger have announced that their latest wild-looking creation is about to go into production. Meet the Ryuger Eidolon BR-RTS, a full carbon, full suspension, aero commuter ebike. We’ve never seen anything quite like it…

Why do they call it their Covid eBike? Simply because they developed it over the lockdown period, during the Covid pandemic.

I feel the Ryuger Eidolon ebike bears some resemblance to a full suspension mountain bike, aero time trial bike, and a MotoGP bike, all at the same time. On paper, it is in fact a commuter ebike, but that classification does this creation something of a disservice.

For starters, it fails to consider the carbon frame and fork with aero shaped tubes and blades, and the Cane Creek coil shock-damped front and rear suspension. We don’t yet know how much front and rear wheel travel this thing has, but we’ll update you as soon as we’ve heard back from Ryuger.

The few pictures shared with us show very little of the finer detail. We don’t have many angles on this thing so much of this will be speculation.

Ryuger’s Instagram tells us that one of the problems the brand faced when developing this fork was that it flexed too much when cornering the bike hard. Thus, they decided to brace the fork legs with two bridges.

Both fork lowers get a brake mount, allowing the Eidolon to run not one but two hydraulic disc brakes with 203mm rotors.

While the Ryuger Eidolon sure is interesting to gawp at, the brand say the coolest thing about it is the way in which the carbon frame is made. “Whereas conventional carbon construction includes bladder bags and pre-formers to expand the carbon frame, Ryuger has developed a unique process eliminating the bags, using less carbon while increasing strength and agility on the road” – Ryuger. No more detail than that, sorry.

While this ebike is designed around a 29″ wheelset, it can also take 27.5″ or 26″ wheels with wider rims to fit chunkier tires more suited to riding off-road. No specific tire clearance claims are made, though it does come spec’d with 2.5″ Maxxis Hookworm tires.

What about the motor?

Of course, there’s so much going on here that you might well forget the Ryuger Eidolon is in fact a commuter ebike. It runs a Shimano Steps E8000 motor with a Shimano 504Wh downtube-integrated battery.

We don’t have any pricing information for the Ryuger Eidolon BR-RTS just yet but, we can tell you it will be available in Acid Avocado and Spacing Racing colorways.