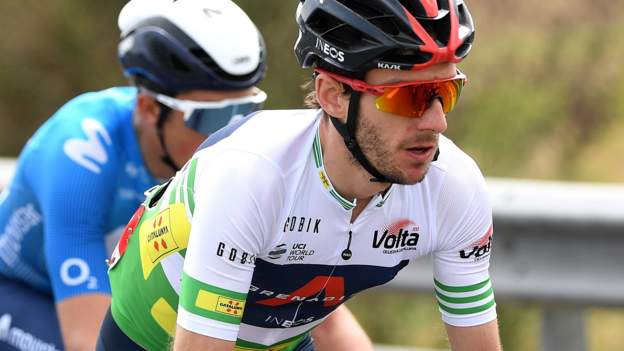 Ineos Grenadiers’ Adam Yates retained the lead of the Volta a Catalunya after Saturday’s penultimate stage.

Yates, 28, is now favourite to win overall in Spain with just one stage remaining, and team-mate Geraint Thomas in third, 49 seconds behind.

Yates’ twin brother Simon is one minute 20 seconds down for Team BikeExchange, and Hugh Carthy is nine seconds further back for EF Education-Nippo.

Yates’ biggest threat for winning the white and green jersey is from his team-mates in Thomas, 34, or Australia’s Richie Porte who is second, 45 seconds behind.

The next non-Ineos rider is Movistar’s Alejandro Valverde at one minute three seconds down.

But Froome, 35, will be encouraged by an improved performance on Saturday’s 194km stage from Tarragona, pulling on the front of the peloton as the pace increased with about 27km to go.

Hayter, 22, won one of the race’s five stages and finished fourth in the overall standings, 36 seconds behind winner Jonas Vingegaard of Jumbo-Visma.

Deceuninck Quick-Step’s Mark Cavendish had led the race after the first stage on Tuesday.