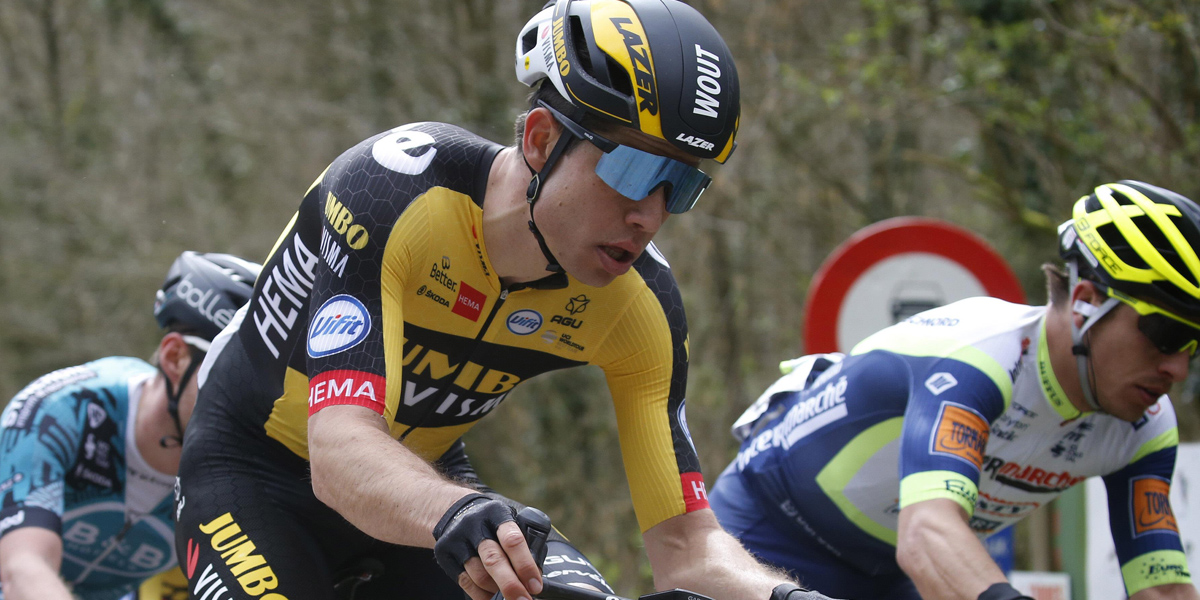 Race Report: After a tough, wind-swept 250 kilometres, Wout van Aert won the 2021 Gent-Wevelgem. The leader of the Jumbo-Visma team started the day as top favourite and did not disappoint. He won the sprint from a leading group of seven riders who had been off the front for most of the day. Italians took the next three places: Giacomo Nizzolo (Qhubeka-Assos), Matteo Trentin (UAE Team Emirates) and Sonny Colbrelli (Bahrain-Victorious). Michael Matthews (BikeExchange) was fifth. 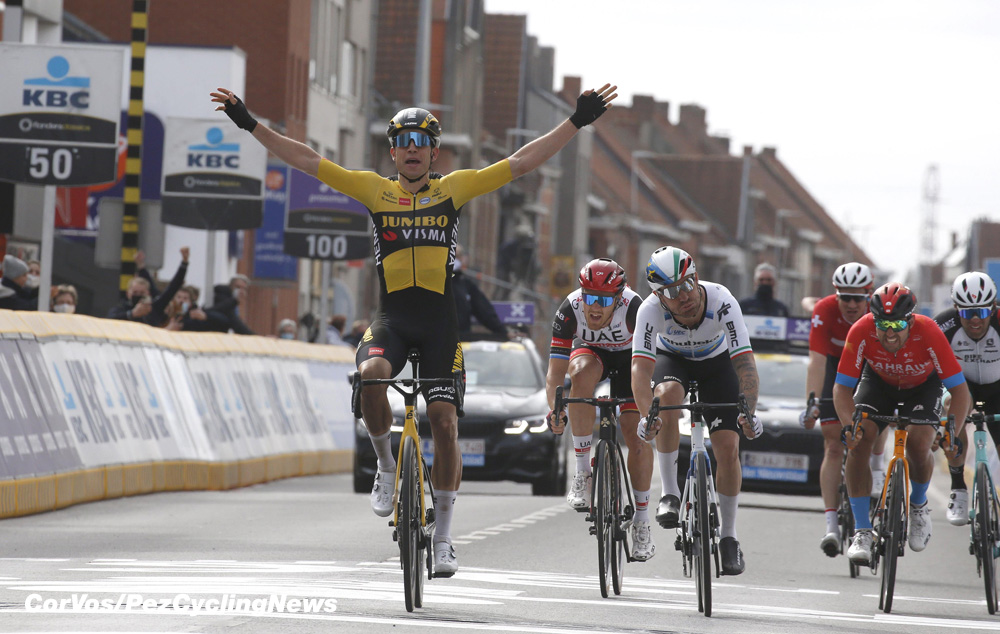 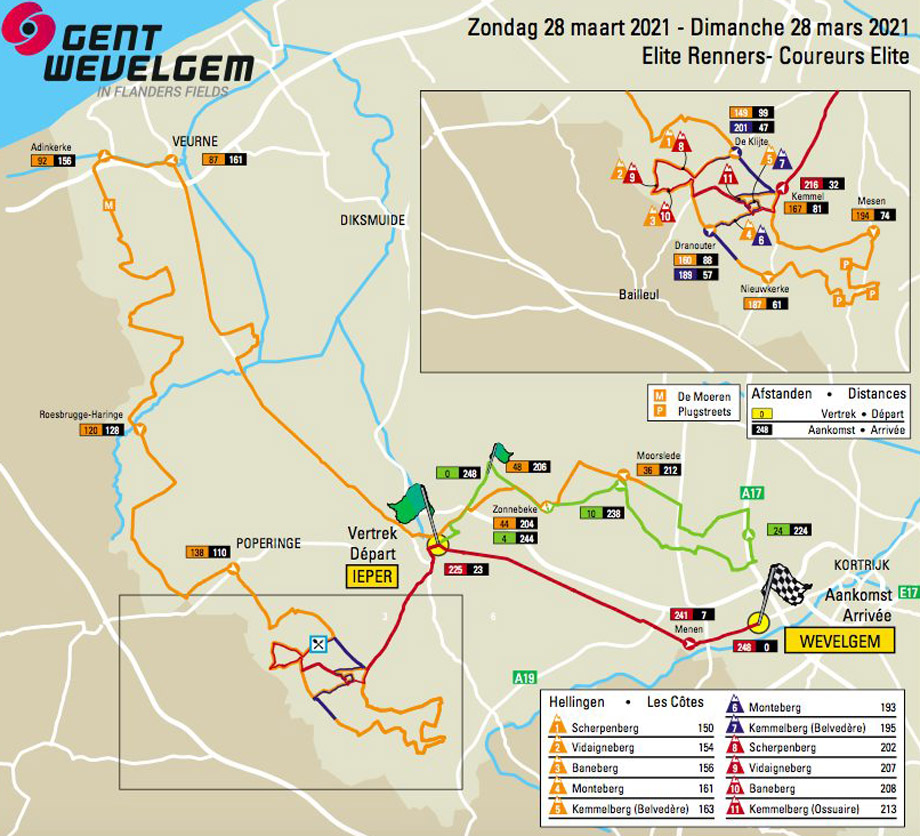 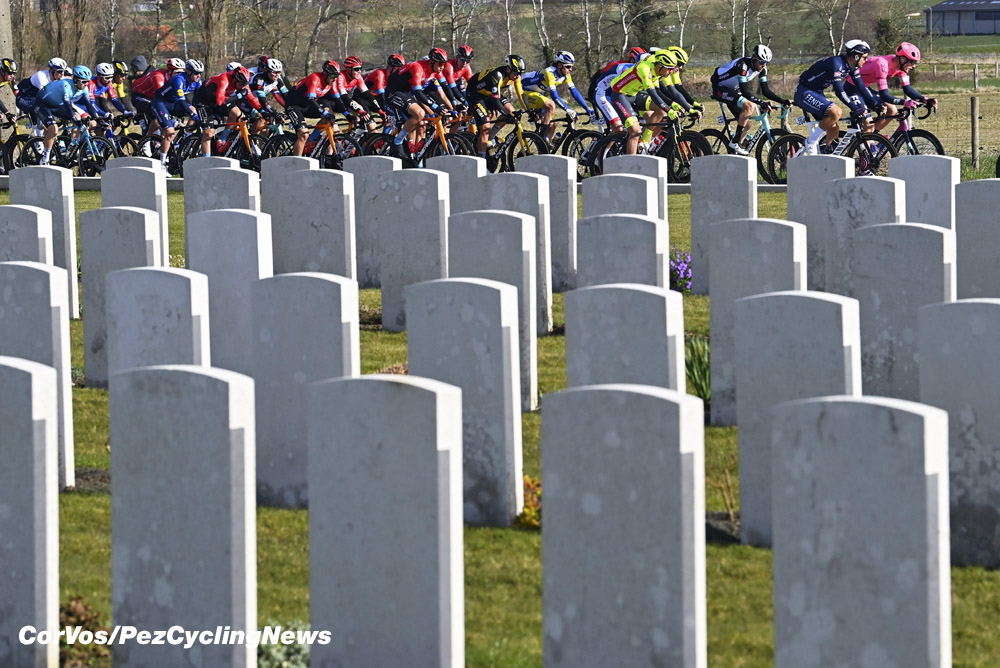 The Gent-Wevelgem peloton passes many war graves on the route

In the peloton, the teams that missed the move had to chase. The wind tore the peloton into echelons. Led by Deceuninck – Quick-Step and Alpecin-Fenix, the gap was narrowed to the Van Aert group. Zdenek Stybar, Davide Ballerini, Oscar Riesebeek and Luke Durbridge tried to cross to the leaders, but it was a hard job. 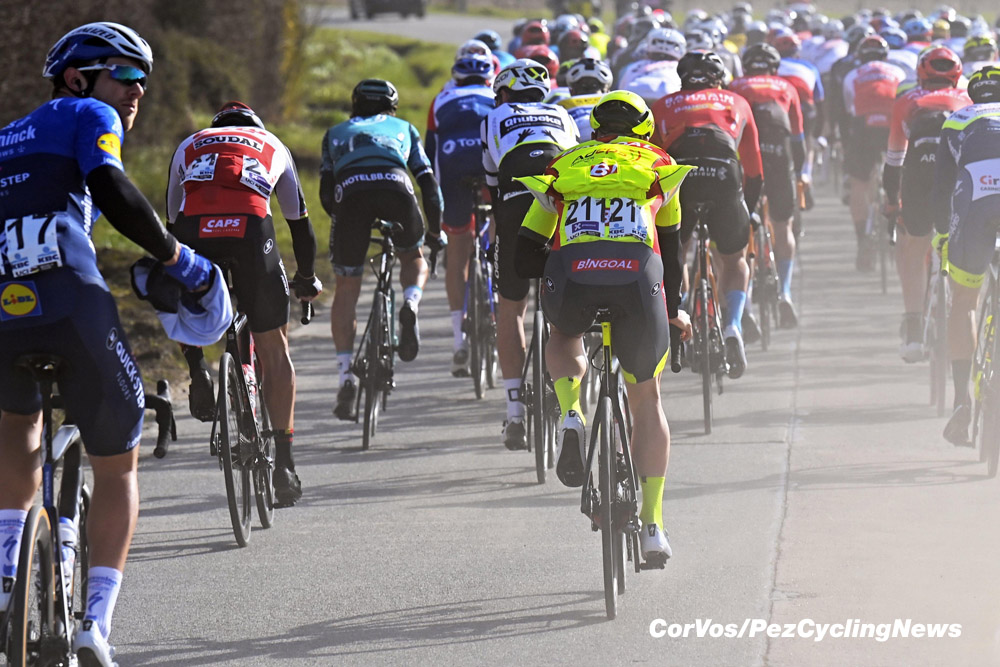 On the first climb of the Kemmelberg, the leading group had thinned down, while the Stybar group became a bit larger. Despite support from Yves Lampaert, Oliver Naesen, Søren Kragh Andersen and Gianni Vermeersch, they could not get closer than 30 seconds to the leaders. They had to drop back to a group with Greg Van Avermaet and Arnaud Démare, where the pace slowed. The leading group had a few BikeExchange riders to help Matthews. The difference fluctuated around 1 minute for a long time. 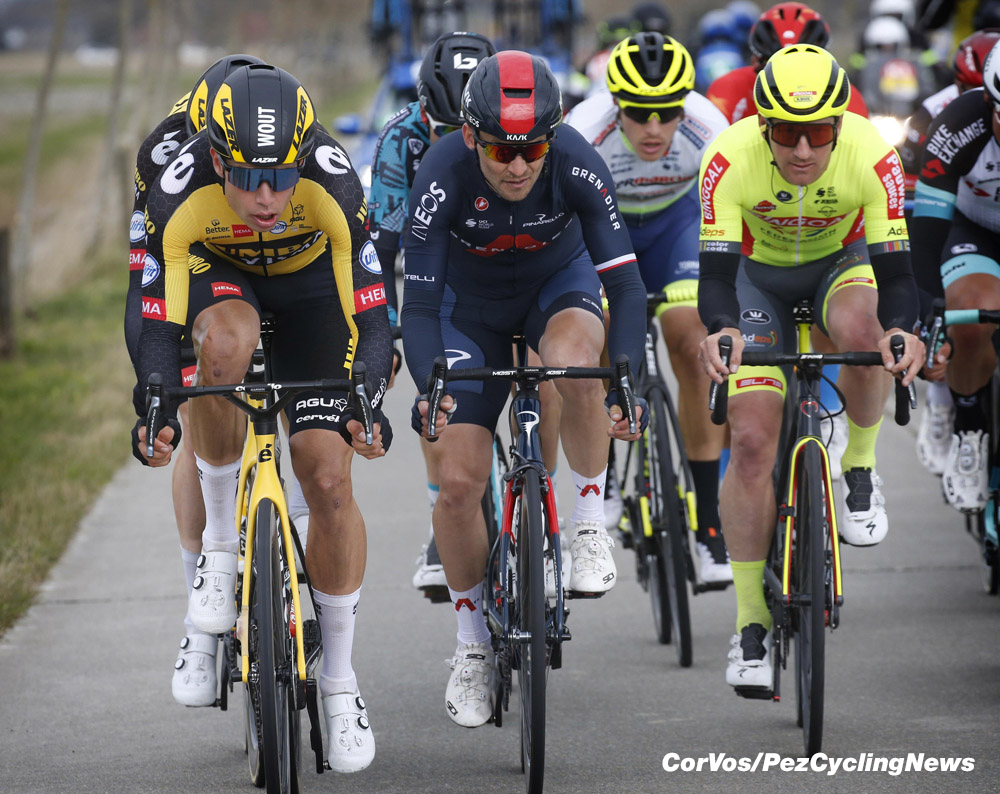 Wout van Aert was in the early break

The second time up the Kemmelberg, Van Hooydonck and Van Aert put the pressure on in the leading group. Only Trentin, Colbrelli, Küng, Matthews, Bennett, Van Poppel and Nizzolo could follow. The nine worked well together and kept the pursuers at more than a minute. An attempt by Lampaert and Vermeersch to make the crossing didn’t work and they dropped back to the thinned peloton with 40 kilometres to go. Due to the work from Alpecin-Fenix ​​and Deceuninck – Quick-Step, the gap was slowly reduced to under a minute. 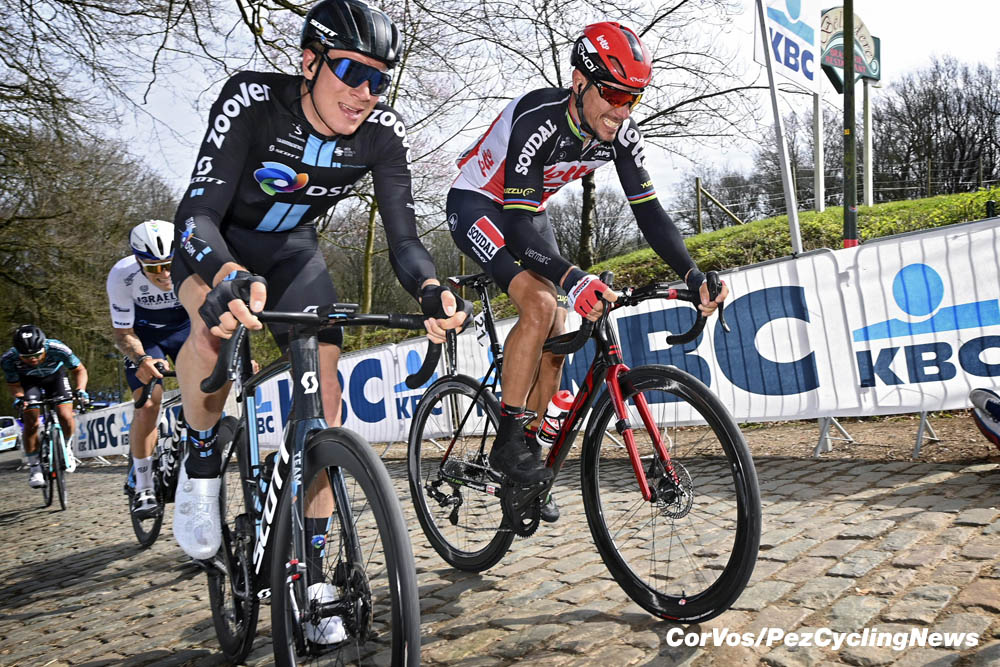 Philippe Gilbert had to grit his teeth

The last time over the Kemmelberg, and the last climb of the day, was at 35 kilometres from the finish. The leading group stayed intact and saw the first chasing group within 55 seconds, but they did not get much closer. Just after the Kemmel Sam Bennett was in trouble. The Irish sprinter had gone so deep that he was sick on the bike, although he managed to hang on to the leaders. 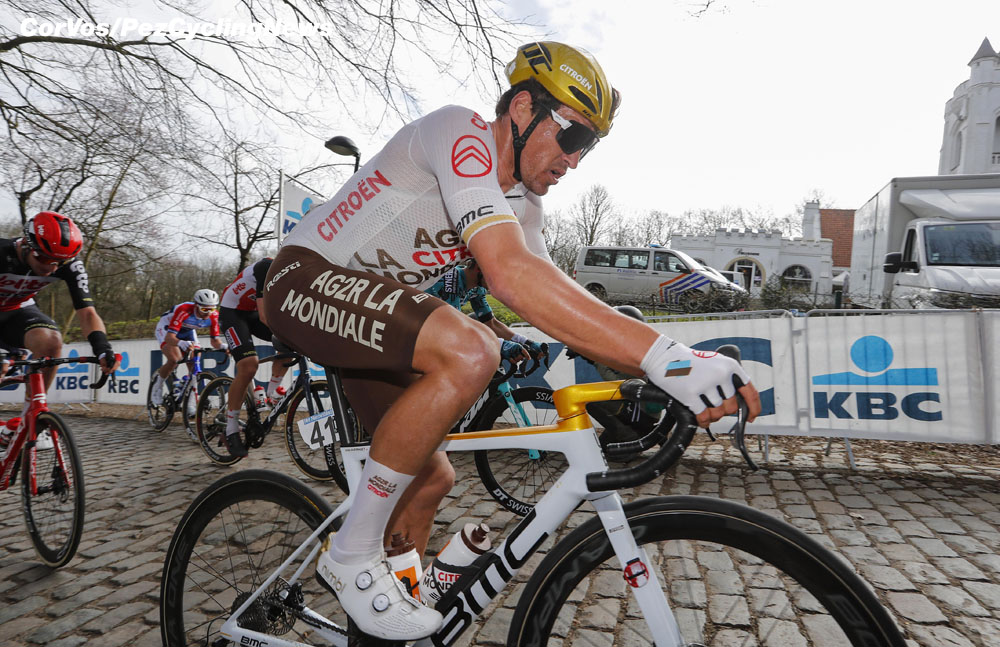 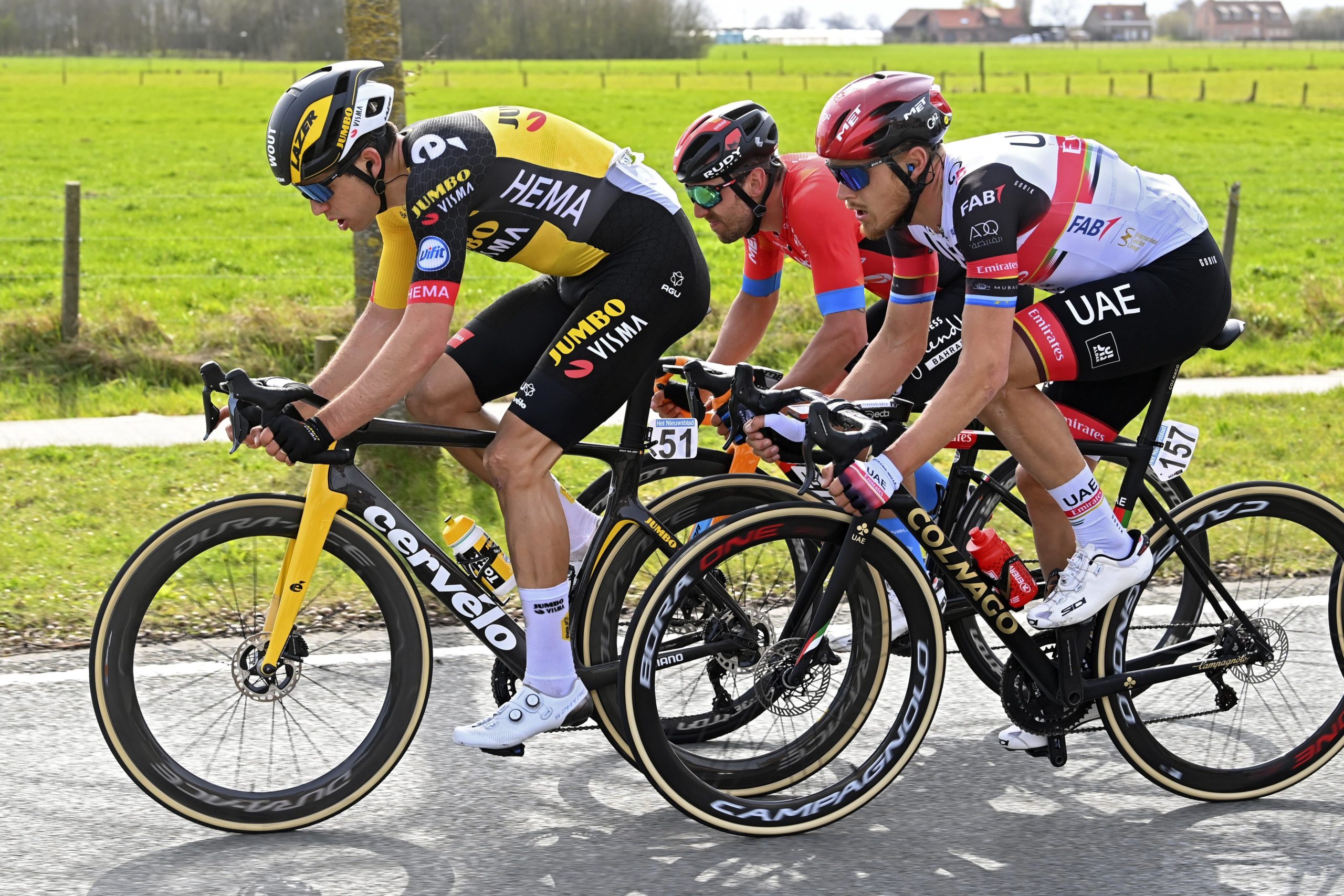 Twenty kilometres before the finish, the lead of the nine was still at 50 seconds. Anthony Turgis rode away from the chase group as no one was willing to work too hard. In the leading group, a tired Bennett and Van Poppel were dropped due to a sharp attack by Van Hooydonck. Only Van Aert, Küng, Trentin, Colbrelli, Matthews and Nizzolo could follow him with 15 kilometres remaining. 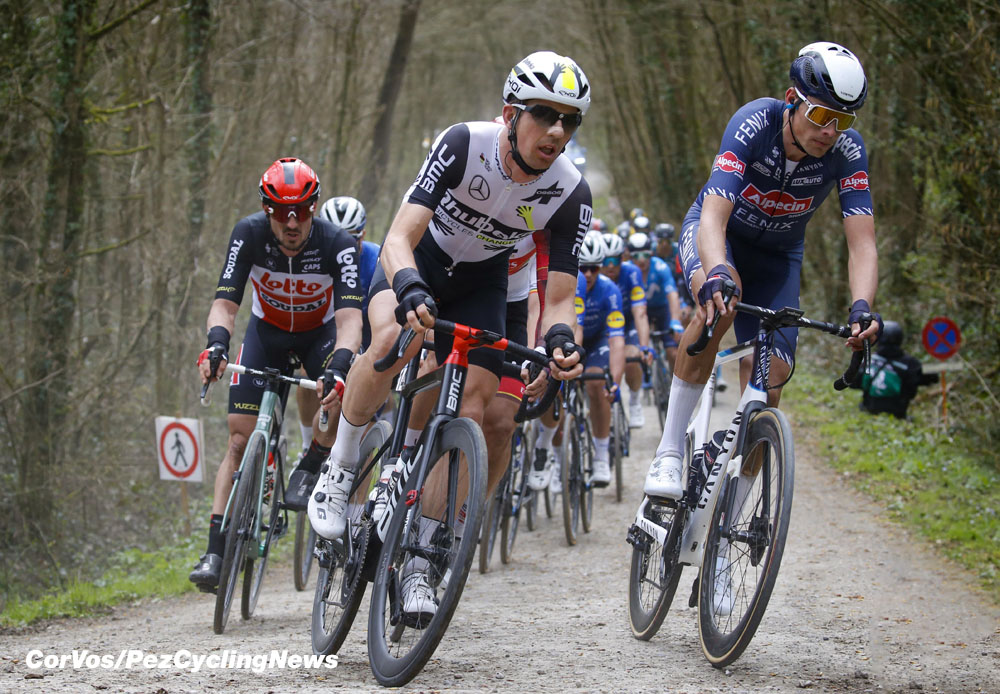 Degenkolb had missed the boat 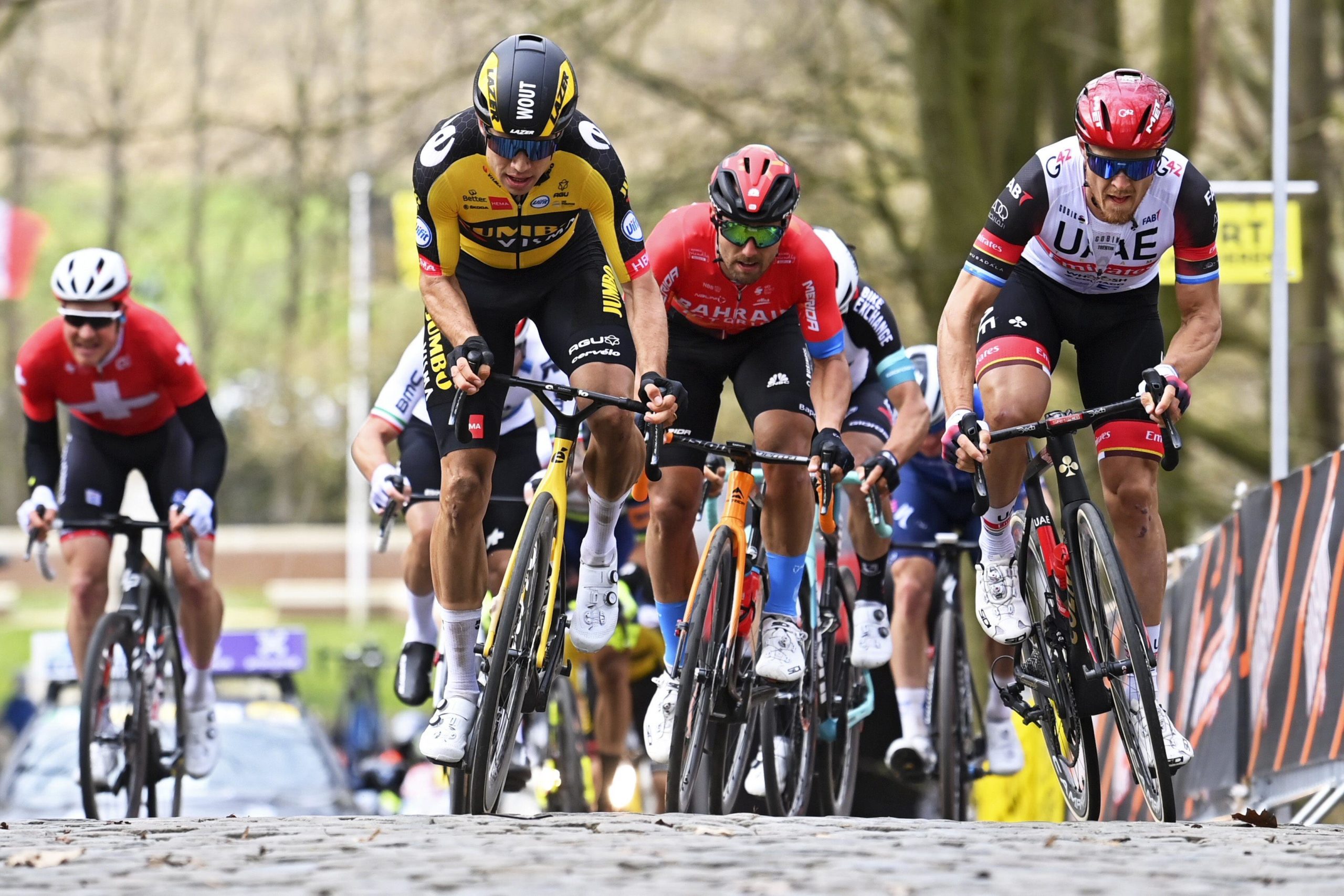 Last time over the Kemmel

Due to a fire near the finish, the last five kilometres were changed and the total distance was slightly longer than planned. That was no problem for the seven leaders, because they had all the time for the final as the pursuers were no where in sight. 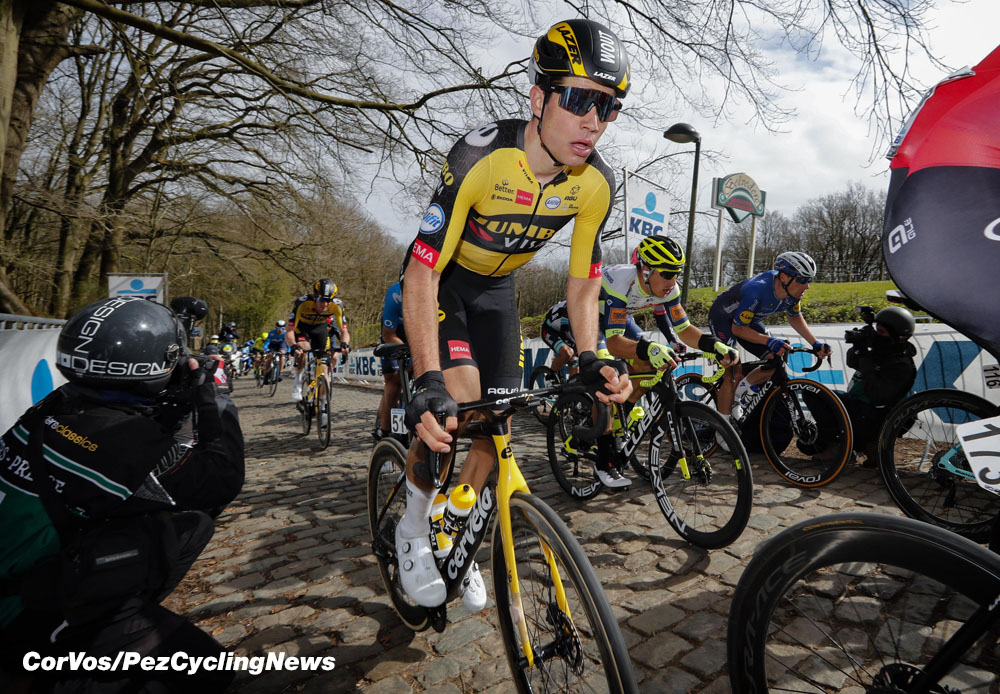 The leading group continued to work well, partly due to a strong tailwind. Küng attacked 2 kilometres from the line, but that acceleration had little effect. Van Hooydonck then kept the pace as high as possible for Van Aert. Küng was the first to start the sprint, but was countered by a very strong Van Aert. 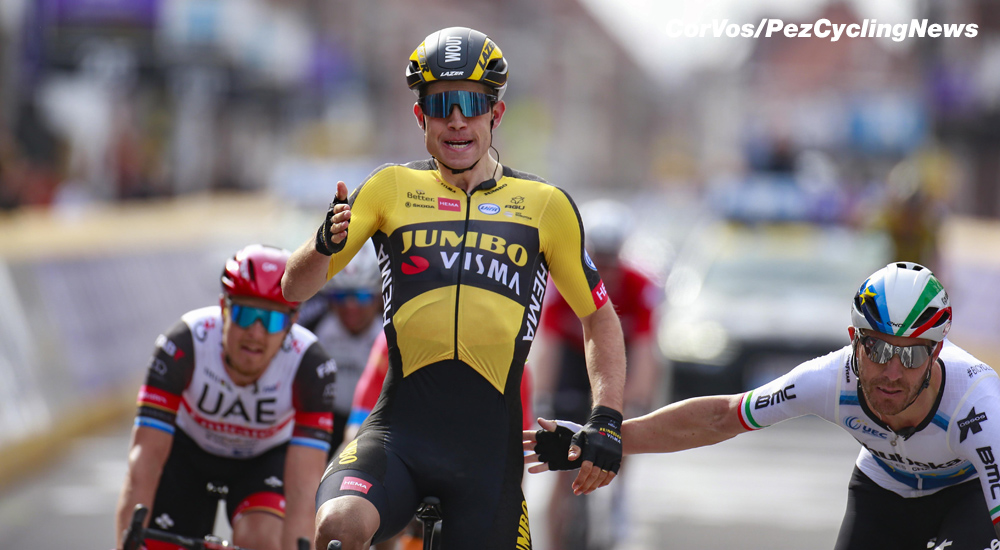 The Belgian top favourite hit the front and didn’t let anyone come past him. He left European champion Giacomo Nizzolo and his fellow countryman Matteo Trentin in second and third place. Van Aert is the fiftieth Belgian victory in Gent-Wevelgem. 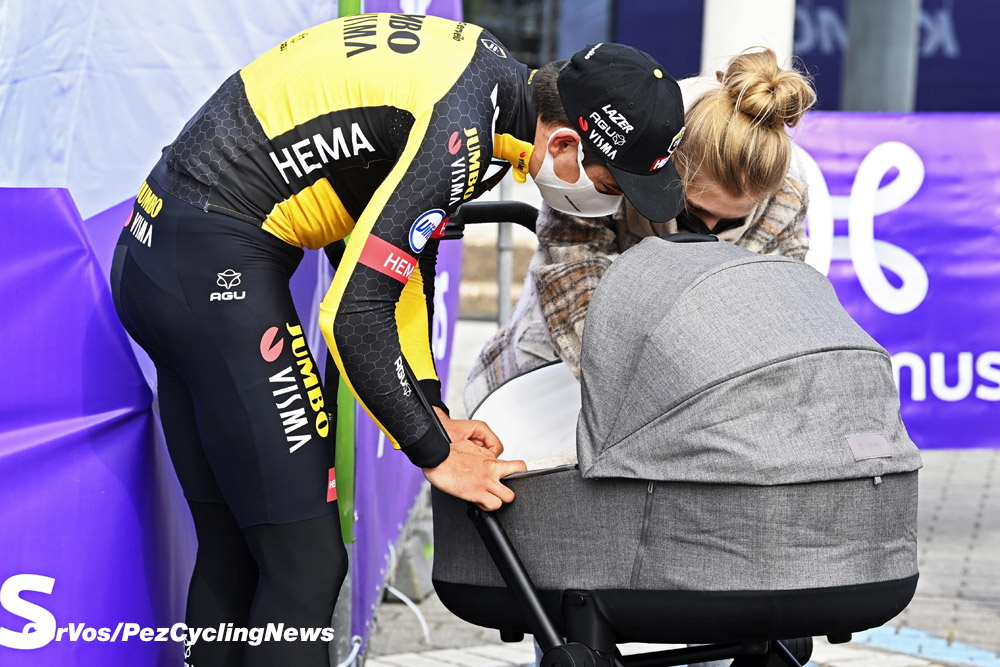 Race winner, Wout van Aert (Jumbo-Visma): “In the hilly zone I deliberately waited to attack to get as many riders as possible. The cooperation was good and with the team we kept control of the race. Nathan was fantastically strong today. For the last time up the Kemmelberg I gave him as much courage as possible to survive it, because I knew I was going to need him. He is the one who also took Sam Bennett (and Danny van Poppel at 16 out) out. In the final straight he still took the lead to start the sprint. Really chapeau! This victory means a lot to me. I have already won many great races, but in the Flemish races I have often just missed it. I was waiting for this.”