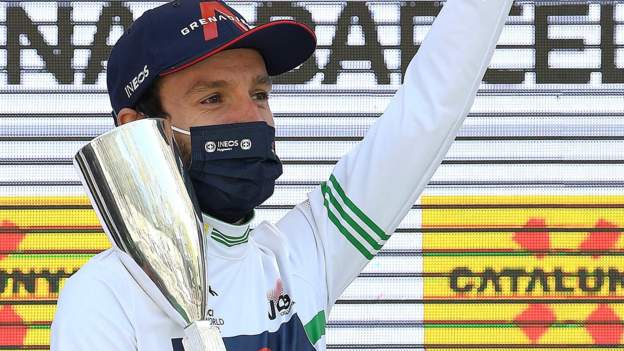 Adam Yates has won the Volta a Catalunya ahead of Geraint Thomas in a race dominated by Ineos Grenadiers.

Britain’s Yates, 28, led the race since a powerful victory on the summit finish of stage three on Vallter 2000.

Ineos completed the top three in the general classification, with Australia’s Richie Porte second, 45 seconds down and Thomas third by a further four seconds.

The 133km stage, held in glorious sunshine around the Catalan capital Barcelona, saw the group of rivals for the white and green jersey come in one minute and 46 seconds behind De Gendt.

The group included Yates and all the other main British contenders – Thomas, Hugh Carthy of EF Education-Nippo (one minute and 20 seconds down) and Yates’ twin brother Simon for Team BikeExchange, a further 12 seconds behind Carthy, in ninth overall.

How did the British talent perform?

The week-long stage race around Catalonia – the 100th edition – was the first real indicator of British cycling’s main prospects for this season.

Yates’ victory demonstrates he is the strongest rider so far, having come second in February’s UAE Tour.

And his performances were by far the most convincing in this race, showing the most aggression and ingenuity on the climbs as the likes of Thomas, 34, and Carthy, 26, followed his wheel and never really showed much in response.

Thomas, who won the 2018 Tour de France, is still the main choice to try to win it this year for Ineos, as things stand.

Yates will be pleased by this form, especially after the heavy crash in the UAE which left him bloodied and bruised.

He is the least decorated of all the main British competitors, in particular by comparison with his brother, Simon, who has one Vuelta a Espana grand tour win and seven grand tour stage victories. Adam has no grand tour stage or race victories. But this is his third stage race win in as many years after 2019’s CRO Race and last year’s UAE Tour.

While such a dominant performance will please Ineos, the whole team will be mindful that recent Tirreno-Adriatico winner Tadej Pogacar of UAE-Team Emirates is currently considered the world’s best rider.

Ineos could not stop last year’s Tour de France victor Pogacar winning with Thomas in Italy a few days ago or with Yates in the UAE last month.

Four-time Tour winner Chris Froome had, by his standards, a disappointing race as he continues to try to find form following his horrific crash in 2019 which left him with multiple fractures and a long, still ongoing, period of rehabilitation.

In some stages Israel Start-Up Nation’s Froome struggled to keep pace with the peloton, but he had an improved performance on Saturday’s 194km stage six to Mataro.