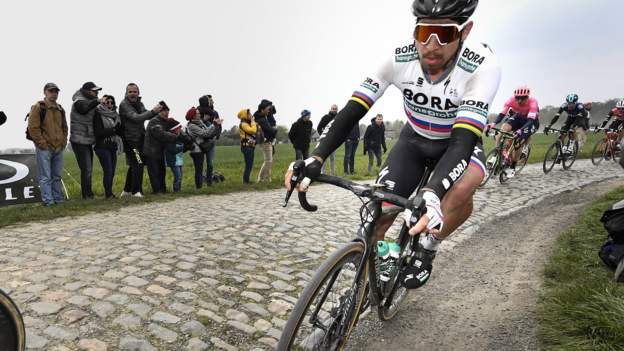 French classic one-day race Paris-Roubaix has been postponed until 2-3 October this year because of the ongoing coronavirus crisis.

Organisers ASO and governing body the UCI agreed with French authorities it could not be held on 11 April.

The race is famed for its tough course across the narrow, cobbled farm tracks in northern France

“We are pleased to announce that the Queen of the Classics will return in 2021,” said a statement.

“Paris-Roubaix is a source of pride for the whole of the Hauts-de-France region, which comes together every year with great enthusiasm,” it added.

Hospitals in the Hauts-de-France region have been inundated with Covid-19 patients.

The race – known as the ‘Hell of the North’ – is one of cycling’s five ‘monument’ showcases and traditionally takes place in April.

It gets its reputation because of the number of riders who fail to finish and often come to grief on the cobbled pathways.

Paris-Roubaix has never been won by a British rider in its 125-year history.

The first women’s edition of the race was due to be held this season on the same day as the men’s race, but will now be rearranged for 3 October, with the men competing the day before.

Riders with the most success include Roger de Vlaeminck and Tom Boonen, both of Belgium, with four triumphs each.

Belgium’s monument one-day race the Tour of Flanders is scheduled to go ahead on 4 April.