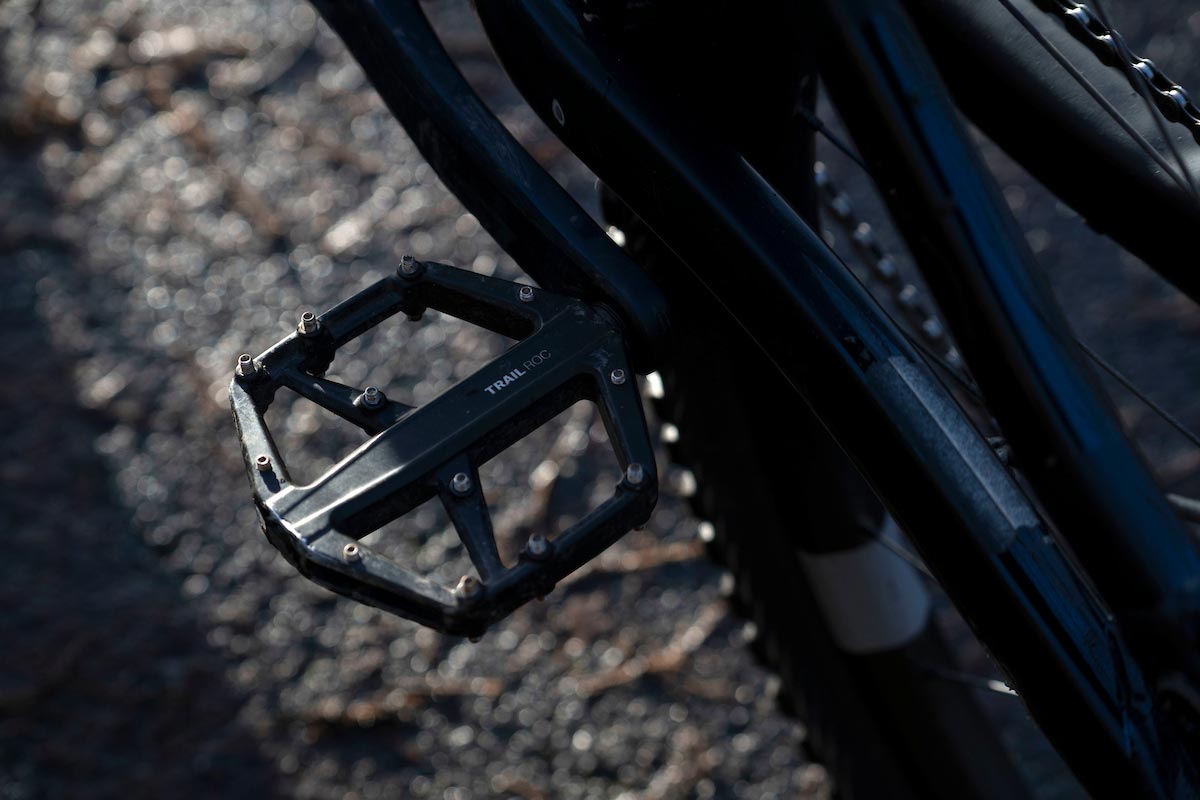 At the back end of last year, LOOK launched a series of flat pedals for the first time in their 70 year history. Released alongside some flashy Vibram rubber-topped flat pedals for light off-roading were the LOOK Trail ROC pedals aimed specifically at full on mountain biking. Excited to see what LOOK have to offer to singletrack enthusiasts, we got a set in for testing on our local trails in the Tweed Valley, Scotland. 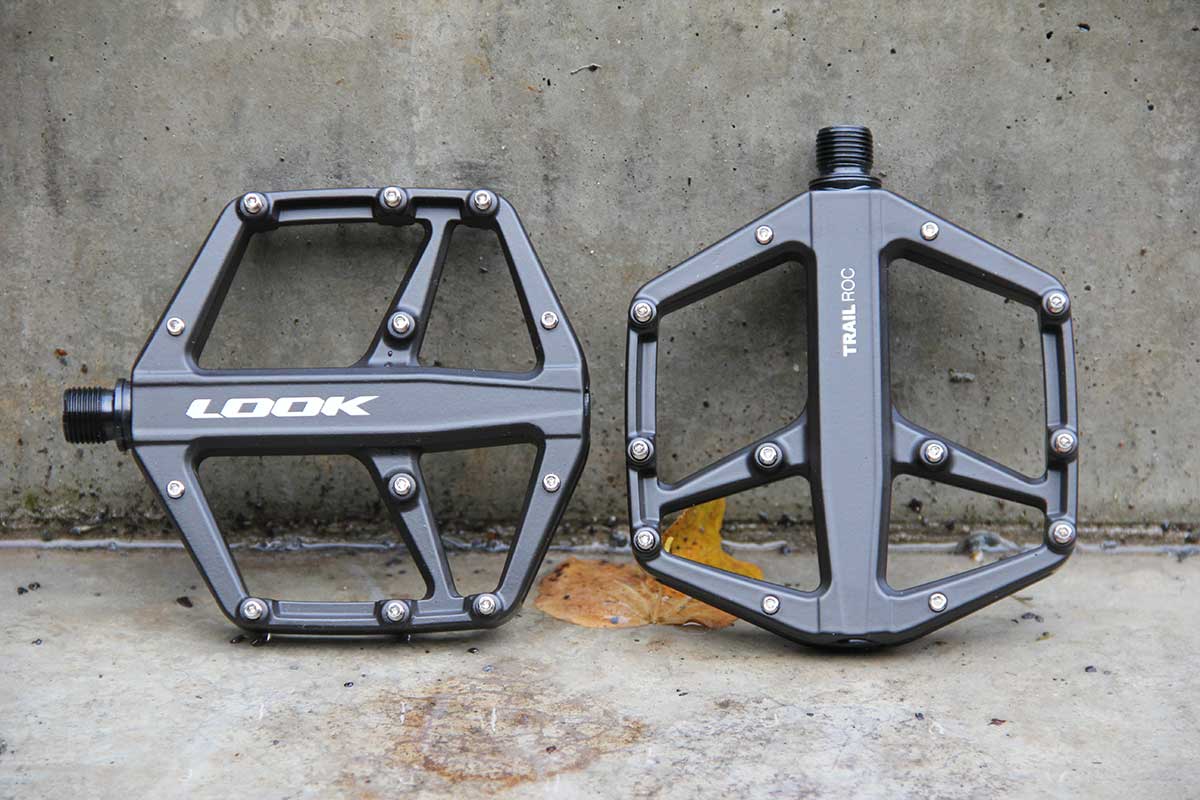 The Trail ROC flat pedals retail at $80. That’s a very reasonable price for an alloy pedal when you compare it to the likes of the popular Nukeproof Horizon v2 Sam Hill pedal, the DMR Vault or the Burgtec Penthouse MK5 flats, all of which are priced well over $100. And they’re from LOOK, a brand well-respected for their quality road pedals. 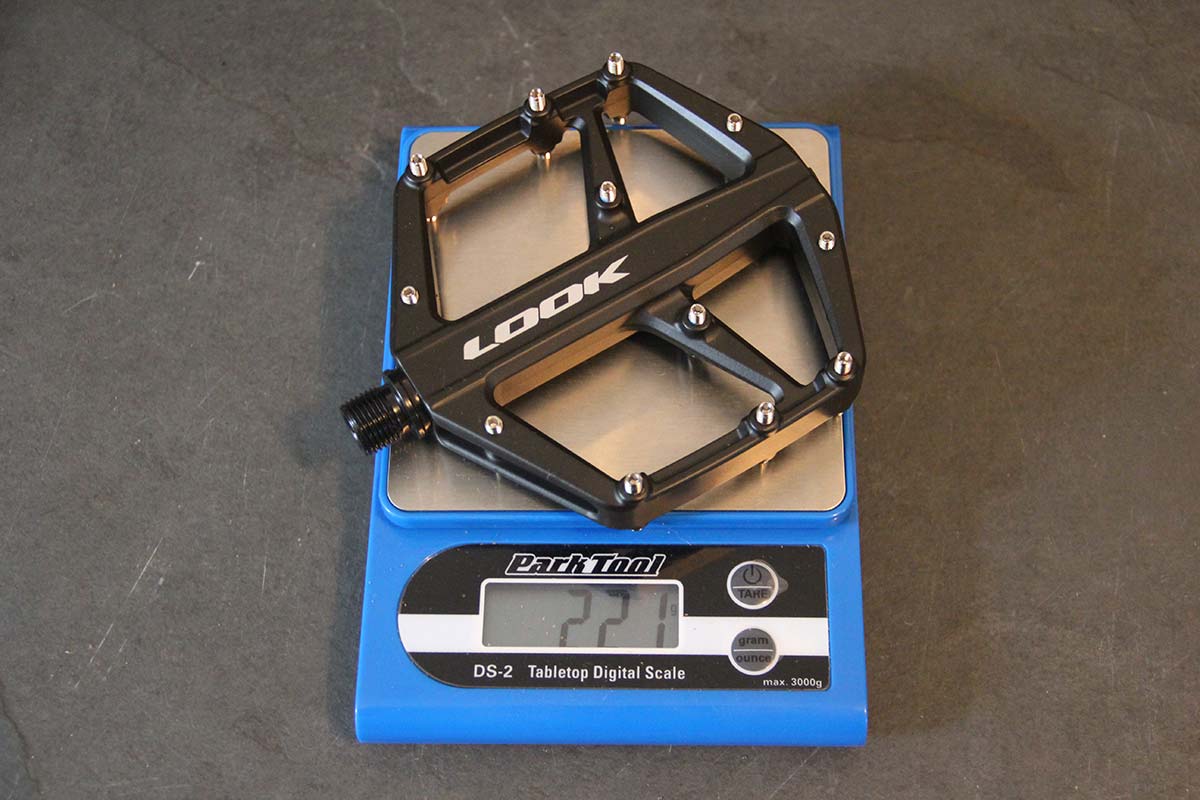 The LOOK Trail ROC pedal gets a 110mm x 110mm platform, a fair bit larger, and heavier, than the abovementioned competitors. One pedal weighed 221g on our Park Tool digital scale. 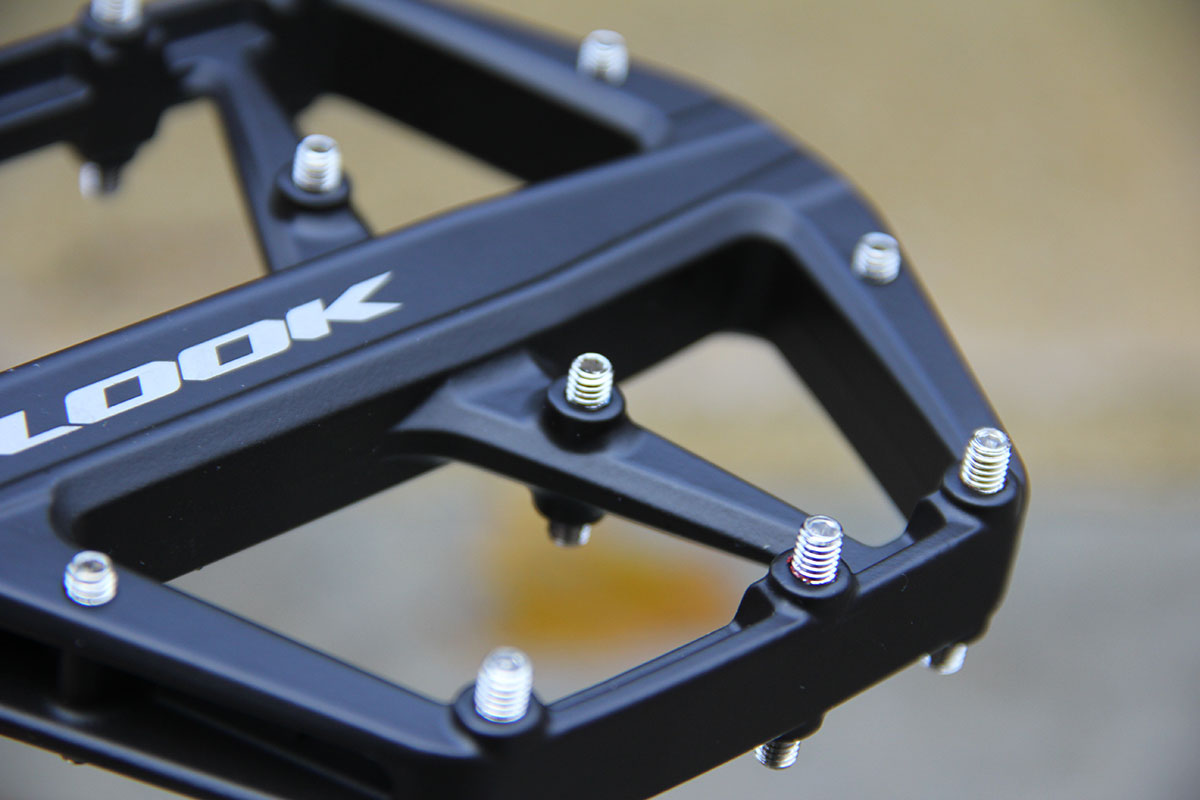 That big platform is home to 12 pins on each side. In their original press release, LOOK stated that six of those pins (the ones at the front and rear edges) stand at 10mm tall while the other six that track along the middle area of the pedal body are just 8mm tall. On our pair, there were definitely three different pin heights… 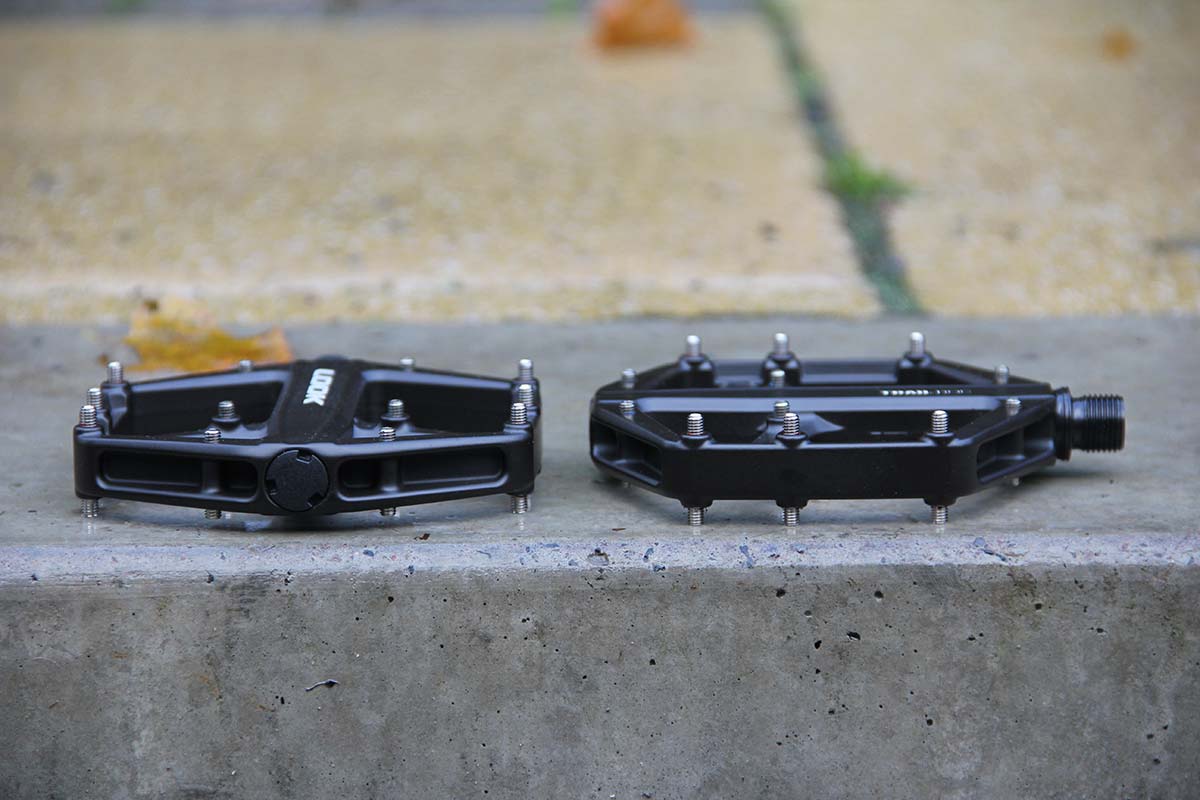 The front and rear pins are the tallest, while the center-left and center-right pins stand at under half their height. The remaining two pins located in the middle region stand at a height somewhere in between the other sets. 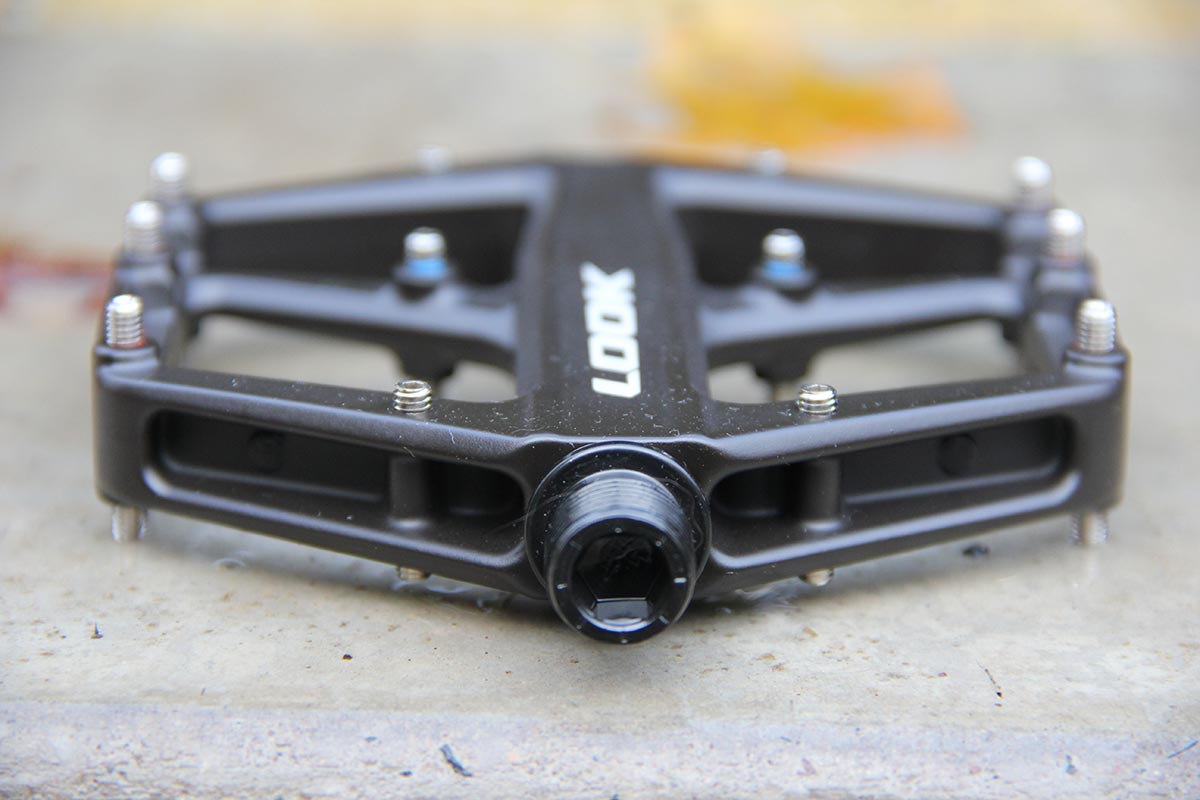 As the LOOK Trail ROC pedal body itself lacks a concavity for your foot to sink into, having taller pins at the edges and lower profile ones centrally (as per LOOK’s press release) would make sense to help create a pseudo-concavity through the height of the pins alone. Thus, we were surprised to see medium-height ones placed in the center region. 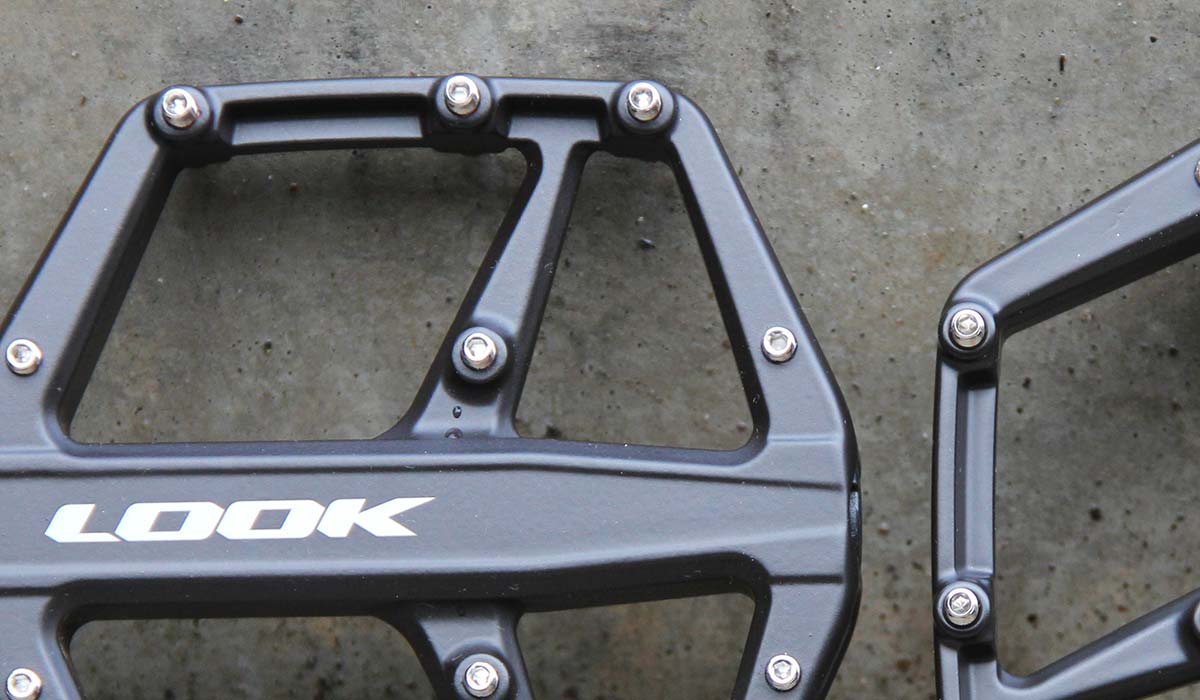 Perhaps i’m laboring the point a little too much, especially when you consider that each pin has a Allen head in the top so you can rearrange their positioning to your liking. I ran the pins in the stock layout.

With a fairly flexible-soled shoe like the original Specialized 2FO, placing all weight onto one pedal, I was able to feel the pedal’s axle region through the shoe. This was considerably less noticeable on the somewhat stiffer Crankbrothers Stamp flat shoe.

From the get go, it was fairly clear this platform was going to be a little on the large side for my UK 5 shoe size. As you can see in the above image, my shoe was never quite able to connect with all 12 pins simultaneously. This was evident when riding rough trails. While the grip was plentiful on smoother terrain, and predictable trail centre tracks, the more chunder-like terrain revealed the less-than-optimal connection, with my back foot in particular inching backwards off the platform as I rode.

This is likely because my shoe would have rarely contacted the outermost low profile pins. For that reason, I will steer clear of recommending the LOOK Trail ROC to those with small feet.

BUT, by the same token, this could well be a great pedal for riders with larger feet. LOOK chose to angulate the outer arms in an attempt to maximize the platform size without causing too much in the way of pedal strikes. This being a wider pedal than what i’m accustomed to, it took something of a beating on to its outer edge. I’m pleased to say it held up really well, with the axle end cap still 100% in tact.

The LOOK Trail ROC pedal spins about a 17mm chromoly spindle with two sets of bearings and a DU bushing. After around a month of riding these pedals 3-4 days per week, we were surprised to hear the dreaded squeaking coming from the axle. The noise led us to check the axle and, sure enough, a small amount of side-to-side play had developed. 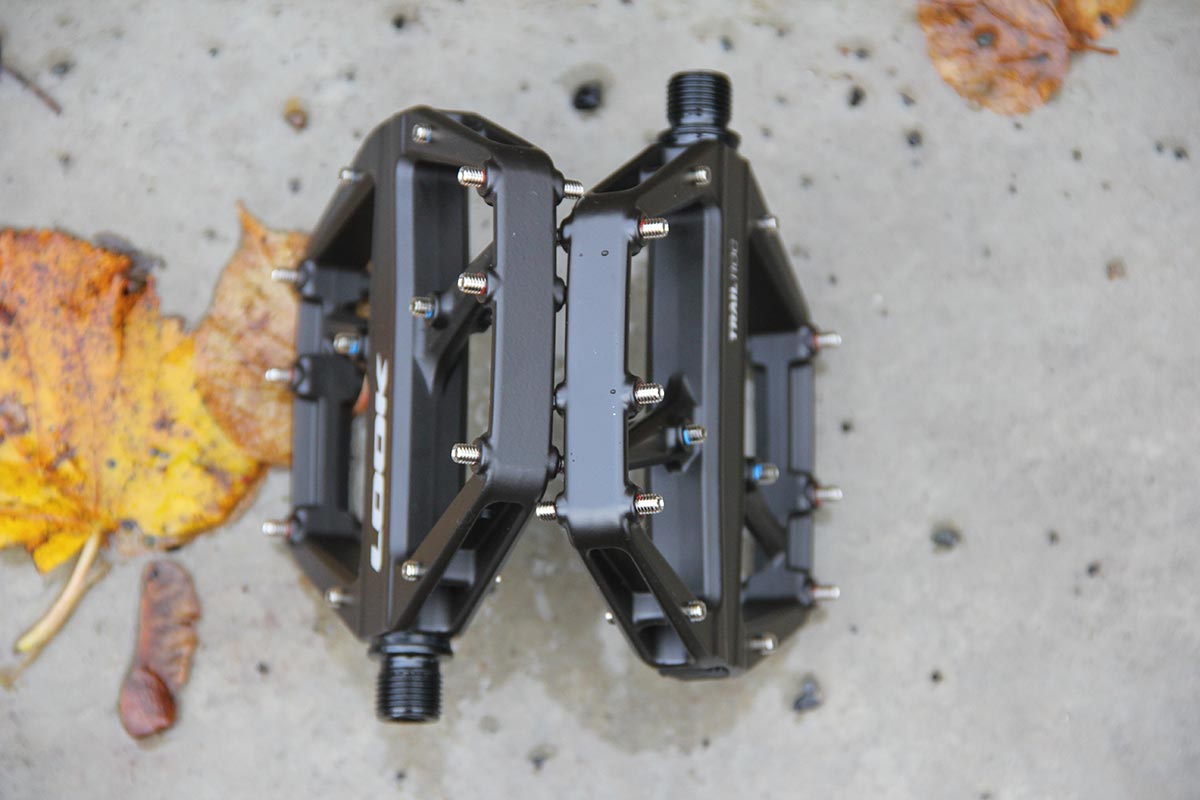 By most standards, that would be considered fairly rapid wear. But, when you consider that I was riding mid-winter in wet, sloppy, gritty conditions, there’s no wonder the bearings became compromised so quickly. For reference, this level of wear is on par with what I’ve experienced with two sets of Crankbrothers Stamp 3 pedals over the last year.

The LOOK Trail ROC pedals retail at $80. Get them in any color so long as it’s black from authorized LOOK dealers and online retailers.