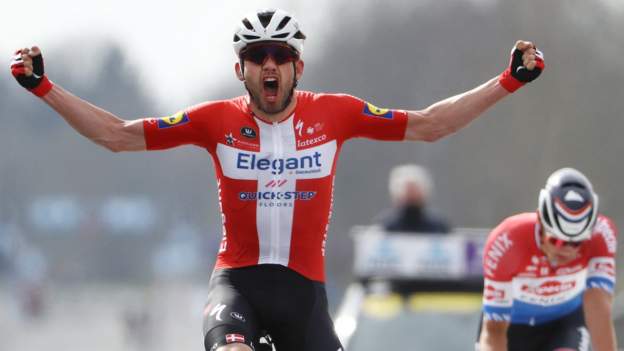 Van der Poel kicked with 250 metres to go but Asgreen reeled him in and pulled ahead before the Dutchman cracked and sat up.

They had been out in front alone for the final 17km of the cobbled 254.3km ‘monument’ one-day classic in Belgium.

“I felt good in the last kilometres still, so I decided to try and trust my sprint,” said Asgreen, who won the E3 Saxo Bank Classic last month.

“It was a really hard race and we were both on the limit.

“It’s been an incredible classics campaign this year and I’m so happy to finish it off like this.”

A group of around 20 riders, including Asgreen, Van der Poel, world champion Julian Alaphilippe and Britain’s Tom Pidcock, on his Flanders debut, led heading into the final 30km.

Asgreen made a decisive attack at 27km to go and only Van der Poel and last year’s runner-up Wout van Aert were able to follow the Elegant-Quick-Step rider, with team-mate Alaphilippe content to sit on in the second group.

But the in-form Danish national champion bridged the gap to set up a tense sprint finish.

Van der Poel was the favourite for victory but Asgreen made sure to stay behind him, forcing the Dutchman to lead it out.

The Dane ultimately proved he had more power left as Van der Poel sat up and ruefully shook his head while the winner celebrated.

It is Asgreen’s first victory in one of cycling’s five ‘monument’ classics – the most prestigious one-day races on the calendar.

Another of those races, Paris-Roubaix, was scheduled for 11 April but has been postponed until 2-3 October because of concerns over the coronavirus situation in France.

AG2R Citroen rider Michael Schar was disqualified from the Tour of Flanders after throwing a water bottle towards a group of fans.

Cycling’s world governing body, the UCI, introduced new rules earlier this year that means riders can be fined, docked ranking points or be given time penalties for throwing bottles or other items outside of new litter zones.

Astana’s Yevgeniy Fedorov and Alpecin-Fenix’s Otto Vergaerde were also disqualified within the first 15km after Fedorov broke suddenly at the head of the race, Vergaerde responded with a shoulder barge and then Fedorov appeared to attempt the same.

The women’s Tour of Flanders will finish later on Sunday.