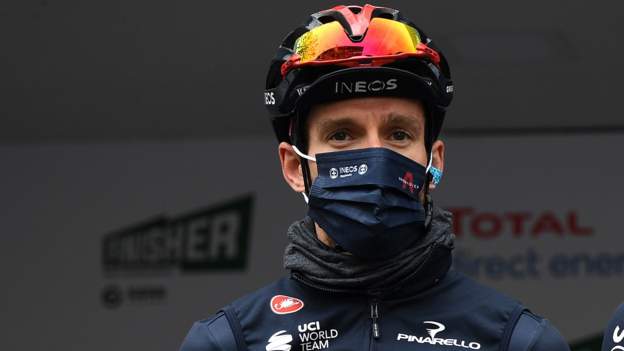 Ineos Grenadiers’ Adam Yates finished with the leaders on the second stage of the Itzulia Basque Country.

Tao Geoghegan Hart lost time on the hilly 155km run to Sestao, but is supporting compatriot Yates in Spain.

Spain’s Alex Aranburu of Astana Premier Tech won Tuesday’s stage after breaking away from the leading group with around 12km to go, on slippery roads in hills surrounded by pine trees near Bilbao.

He finished 15 seconds ahead of the main group, which also included last year’s Tour de France winner Tadej Pogacar of UAE-Team Emirates – the favourite for the victory here alongside fellow Slovenian Roglic, 31.

Pogacar, 22, is fourth in the general classification (GC), 24 seconds down, with American team-mate Brandon McNulty third, six seconds behind, and Aranburu five seconds back in second.

Britain’s James Knox of Deceuninck-Quick Step is 24th in the GC, one minute 16 seconds back, after an impressive ride on Tuesday, finishing 19 seconds behind.