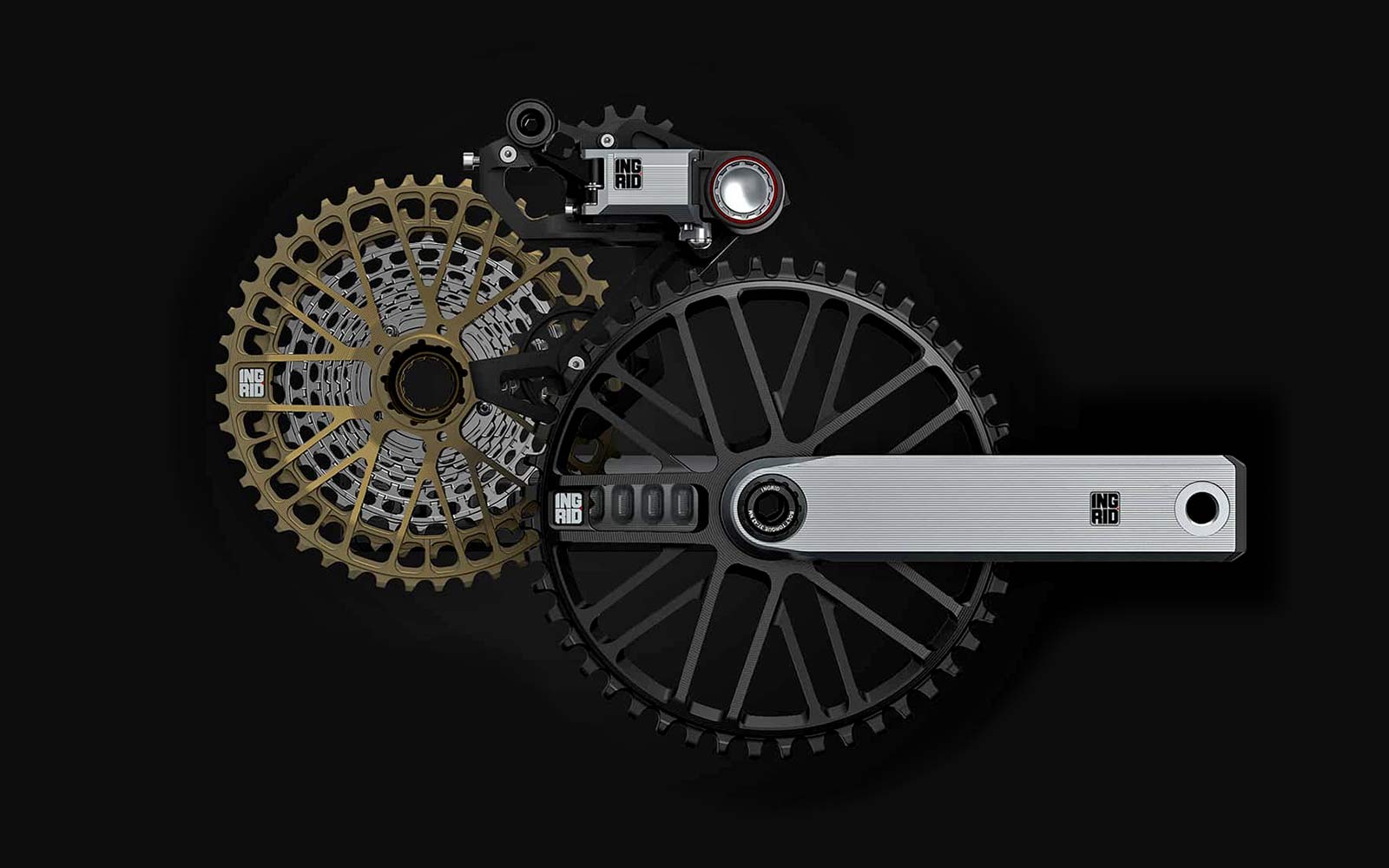 Ingrid Components just dropped the full details on Gran Turismo R, their 100% made-in-Italy 1x road bike drivetrain for either 11-speed or 12-speed builds. Paring back to the core essentials, Ingrid’s 1x road group includes their beautifully in-house machined cassettes, alloy cranksets, and clutched derailleur that works with the shifter you already have on your road, gravel, or adventure bike…

We’ve been seeing Ingrid’s uniquely-styled, machined alloy 1x cranksets & cassettes popping up on custom gravel & mountain bike builds from some of our favorite independent bike shops for a couple of years. But it was really their prototype 12-speed MTB derailleur that piqued our interest last spring. That sneak peek, together with a conversation between Marc Wohler of Flowrider Racing and Giulio Mancini of Ingrid components hinted that there was a lot more in the works.

Developed as their “grunge” approach to bike drivetrains, Ingrid wanted to create more options for cyclists looking for something other than the status quo. That started with machining cassette extenders, then one crankset that became several, then full cassettes, then why not create a derailleur too?

So that’s the big new introduction here, with a few new Ingrid RD1 road 1x rear derailleurs, offered in either 11-speed or 12-speed shift options (plus the 12sp MTB derailleur).

(Side note: Ingrid’s name is an anagram of ‘riding’, which you can see by reading their logo from bottom-to-top.)

Keeping it simple (for the time being, like with the MTB setup?) Ingrid’s road drivetrain does not include a shifter. Instead, it has been developed to work with existing mechanical road shifter, since those already incorporate your brakes too anyways. Two basic versions of the Ingrid Gran Turismo R road derailleur are being produced, with claimed weight starting at 270g: RD1-R12S for 12-speed groups & RD1-R11S for 11-speed groups.

Like the MTB prototype we saw before, both versions share the same combination of CNC-machined 7075-T6 aluminum and 3D-printed, impact-resistant polyamide/nylon PA12 elements. The Ingrid rear derailleur is built to be durable, but also serviceable. Individual elements of the derailleur are replaceable (or upgradeable), with all the parts available as spares to keep you riding for years.

Interestingly, compatibility is quite broad. Ingrid says the 12-speed derailleur will work with any Campagnolo 12-speed mechanical shifters OR the 13-speed Campagnolo Ekar, which will be reduced to shifting across 12 gears. The Ingrid website lists the 11-speed derailleur for SRAM 11sp shifters only, but has said that an 11sp Shimano compatible version will also be offered.

Short cage variants will be offered for up to a max 46T cog, or long cage versions that max out with a 52T cog. For now, the 11-speed derailleur is only offered in short cage, since Ingrid only makes a single 10-46T 11sp cassette option.

The new Ingrid road crankset builds on their popular enduro, XC MTB & gravel cranks, yet now lighter than ever, down to 445g (170mm arms & spindle, without chainring)… and are even more aggressively angular.

The boxy new Ingrid Gran Turismo R road crankarms get machined down from 2024 alloy, with 2 holes drilled out the full-length of the arms, plus pocketed machining of their backsides to reduce weight while retaining stiffness. They share the same modular 30mm 7075 alloy spindle assembly as Ingrid’s other cranks, and use the same direct mount chainring interface.

Ingrid’s Gran Turismo R 1x road groupset is rounded out with your choice of three cassette options. All three share the same two-part machined construction – a nickel-chromoly 9840 steel monoblock for the smallest cogs that gets heat-treated after machining, and a hard-anodized 7075-T6 alloy block for the biggest cogs.

The 11-speed cassette comes in just a single 10-46T spread that fits on an XD driver body. For 12-speed, the wider gravel/mountain bike cassette gets a 10-48T gearing spread that fits on an XD driver. Or the 12-speed road cassette offers tighter 11-44T gearing and maintaining the pedaling efficiency/lower friction of an 11-tooth small cog, with versions available for either an HG (regular Shimano freehub) or XD driver body.

Or of course, you could always combine the Ingrid Gran Turismo R derailleur & crank with respective 11 or 12-speed cassettes from other manufacturers if you are looking for other gearing combinations… but then you would miss out on the pretty Ingrid machining!

No matter which road or MTB derailleur you select, each will cost you 550€, offered with either a raw aluminum or titanium anodized finish on their parallelogram & clutch. The new CRS-R2 road cranks sell for 450€ in raw, black ano, or titanium ano finishes… with special edition anodization likely as well. Add on another 150€ for the black ano, direct mount road chainring. Ingrid cassettes range from 340-370€ depending on gearing.

The majority of the new Ingrid Gran Turismo R 1x road & MTB components are officially slated for availability starting May 31, 2021, with pre-orders open now direct from Ingrid or through your local bike shop. Some are already available, too.