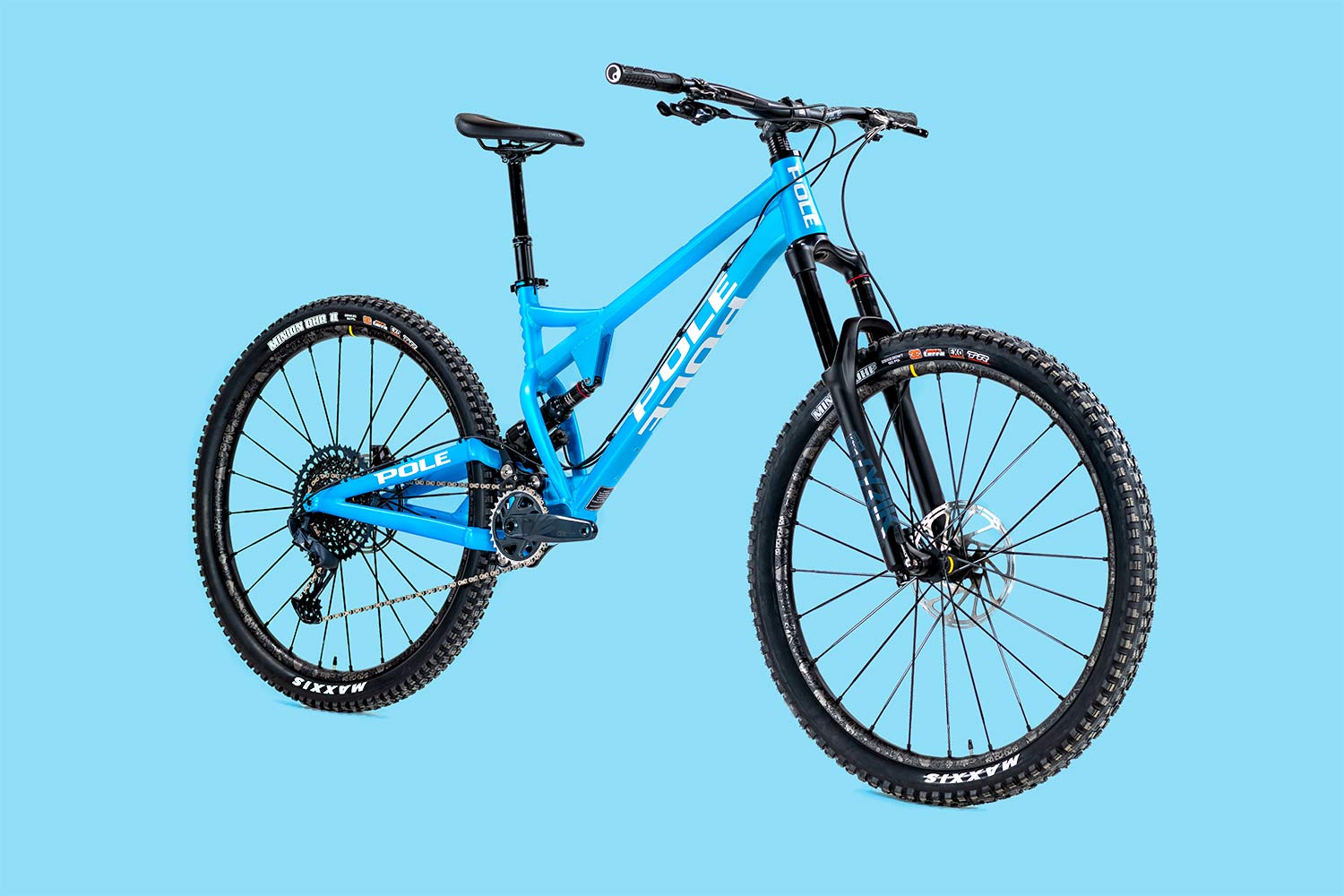 To celebrate the 5 year anniversary of the Finnish bikemaker’s long wheelbase Evolink trail bikes, Pole has given the Evolink 140 a v1.4 upgrade. Keeping its original and forward-thinking low & slack geometry, Pole has tweaked the mid-travel trail-to-enduro bike to make it more capable than ever, pedaling up the mountain and bombing down the other side…

Pole calls the alloy Evolink their original “Game Changer” bike platform, and now it just got better. First developed to make a bold step in drastically different geometry than pretty much every other mountain bike at the time, the Evolink became a benchmark for other bike brands moving towards longer, lower & slacker ‘modern trail bike’ geometry. But Pole’s bikes always ended up with longer wheelbases than pretty much anything out there. Most bike makers were reluctant to go so long for fear of sluggish handling.

But we test-rode the 140mm & 150mm travel Evolinks all the way back in 2016. And we were pleasantly surprised to see that longer, really was better.

Pole says, “This is done by allowing more room for the rider’s knees to bend and letting the bike lean into the curve without a need to shift balance to either side as much. During testing, the lower the bottom bracket height, the more likely a bike tends to push up whilst cornering. A higher BB makes the bike easier to handle without taking away the straight line abilities – it’s easier to bunnyhop and manual.”

It’s a move even Pole was resistant to try, but the real-world testing showed it as the better way to go, once again validating their willingness to leave old conventions inherited from 26″ mountain bikes in the past.

The revised geometry also brings new size names, dropping S-XL in favor of K1-K4. With their progressive geometry, Pole says it gives a more flexible feeling to getting the bike position that a rider feels is best suited to them.

On top of those relatively incremental changes, comes a new feel to the updated Evolink suspension. Mid-stroke of the shock gets a 6% higher leverage ratio for more support where you spend most ride time, equating to a 9% more progressive ratio and 18% more Anti-Squat.

Add to that a move to 55mm metric shocks for 144mm of progressive rear wheel travel in the updated Pole Evolink 140 v1.4.

The updated Evolink 1.4 is being offered as either a frameset or in complete bike builds, but bot5h of which need to be pre-ordered due to the crazy bike industry supply shortages. The alloy framesets start from 1895€ including a Cane Creek headset, rear thru-axle & seat clamp, plus three shock options.

A small number of “Super Limited Stock Custom” Pole Evolink 140 complete bike builds will also be available, spec’d with a RockShox Lyrik Select RC fork, Super Deluxe RL shock & SRAM GX Eagle drivetrain for 4450€. They will be available in a very small number this year, so jump on pre-ordering one right away if you want it, they will sell out.

If you pre-order now, Pole says the first bikes are expected to ship to riders as early as June 2021.

If you have an existing Evolink 140 v1.3, Pole is also working on an upgrade kit to convert it to most of the new v1.4 features. The kit with new in-house made upper & lower headset cups, either a Cane Creek or RockShox metric shock, and all the relevant hardware is expected to be available later this year to upgrade current owners too.