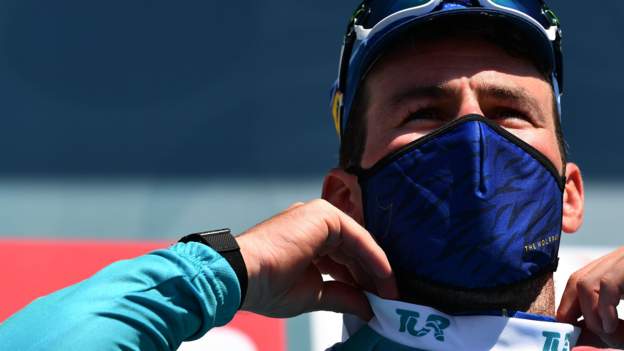 Mark Cavendish has won his second stage at the Tour of Turkey in as many days following a three-year victory drought.

Britain’s Cavendish powered his way around the outside of rivals in the race’s third stage into Konya.

The Deceuninck-Quick Step rider, 35, was tearful during his post-race interview when he paid tribute to his team-mates, including Fabio Jakobsen, who was seriously injured last year.

“The guys did and incredible job. So proud to see Fabio up there,” he said.

Jakobsen, 24, is competing in his first race since a crash during last August’s Tour of Poland, where he sustained head injuries following a high-speed accident with Jumbo-Visma’s Dylan Groenewegen.

Last week he credited his fiancee with his return to racing after she “fed and dressed me when I couldn’t”.

Cavendish, one of the most successful riders in cycling’s history, with 30 Tour de France stage wins, added: “It was a case of staying patient – to see Fabio for the first time involved in a bunch sprint since… I’m so, so proud.”

The Briton – wearing the light blue leaders’ jersey after Monday’s stage win, his first since February 2018 – made his way around Alpecin-Fenix’s Jasper Philipsen and Andre Griepel of Israel Start Up Nation on the final corner after a messy approach following 144km of racing.

“It was such a messy one to get right – the wind was bouncing off the buildings as we came in [to the finish],” Cavendish said.

Cavendish – who rejoined Quick Step this season, having ridden for them between 2013 and 2015 – said he “doesn’t have a clue” where he will race next, but the team will consider him for upcoming major races, including Grand Tours.

The Belgian squad are famous for winning one-day races and bunch sprints, and have several other talented sprinters, such as Ireland’s Sam Bennett.

But Jakobsen still has some rehabilitation to complete and Cavendish’s strength in the final few metres suggested he has the form to win in races such as the Tour de France.