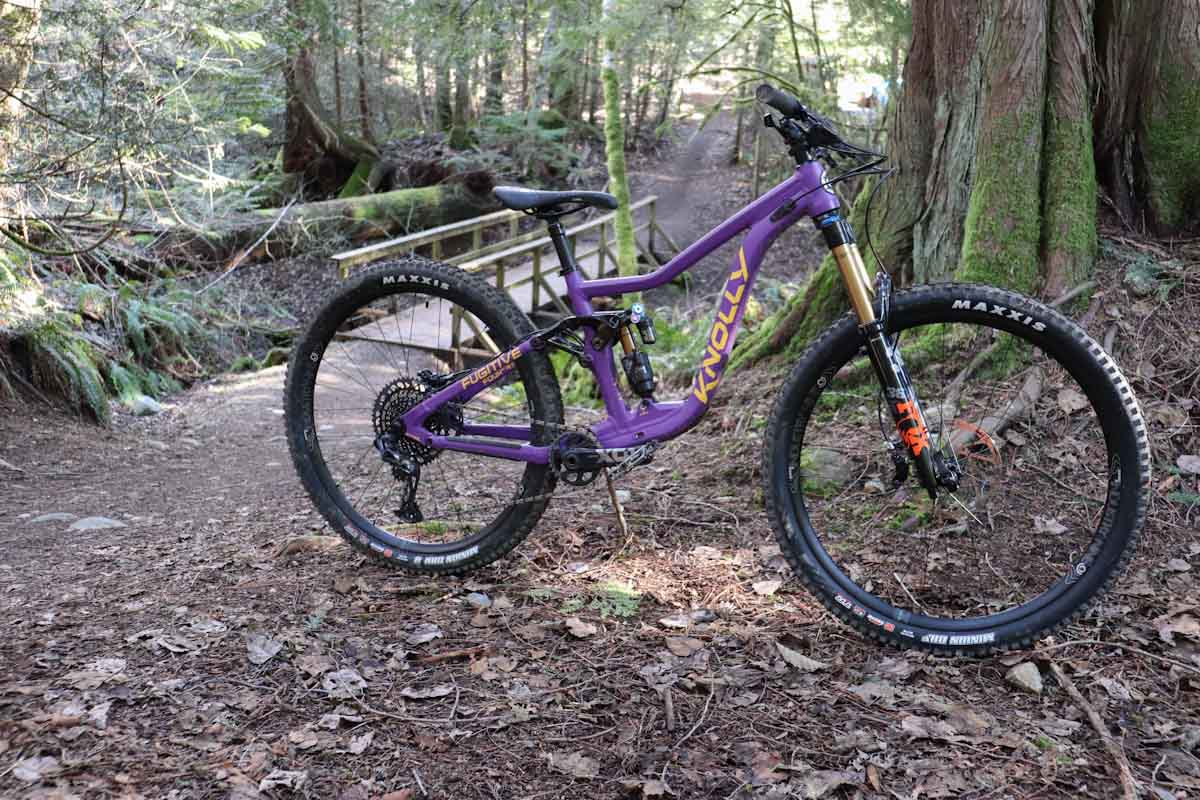 When mountain bikes were first invented, their biggest advantage over ‘ten speeds’ was how they could handle nearly any terrain. Many years later, modern trail bikes like Knolly’s Fugitive are still evolving to become that versatile, highly capable bike we all dreamed of in the beginning. Knolly recently updated their mid-travel, 29” wheeled Fugitive with new geometry and travel numbers, and I got the chance to hop on one for a test ride.

Two summers ago I reviewed the Fugitive LT, so I was keen to see how the new version would ride. I spent a few hours touring around Squamish, B.C. on the new Fugitive 138 with Knolly’s enduro racer Daniel Shaw. I recently rode Knolly’s new Chilcotin, and was really impressed with its finely balanced geometry. I’m not surprised to report the revisions to the Fugitive won me over in the same ways. Knolly’s current frame geometry offers near-perfect rider positioning, and it really helps improve the bike’s pedaling performance, traction, and overall handling.

Knolly’s new Fugitive frames are made from hydroformed 6066 aluminum. The significant updates are its revised geometry and travel numbers, so let’s start there…

Like Knolly’s other models, the Fugitives will no longer be known as the ST (Standard Travel) or LT (Long Travel). To simplify things, Knolly is now identifying their bikes with a number representing their rear travel in millimeters. The revised Fugitives are available in a 131 or 138 version, whereas the outgoing frame offered 120/135mm options.

Knolly sets up the Fugitives with 150mm forks on the 138s and 140mm on the 131s, but part of the reason they bumped up the rear travel was to better accommodate longer forks. Apparently many Fugitive riders were running 160mm forks, so Knolly made the new frame more versatile for those who want to go bigger up front.

In updating the Fugitive, Knolly increased the frame’s reach (growing from 450mm to 466mm on a Medium frame) and steepened the seat mast by one degree to provide a more aggressive climbing position. To improve descending capabilities, they slacked out the head tube angle by 0.5°, now sitting at 65/65.75° in Slack/Neutral. The longer front end also stretches out the bike’s wheelbase to give the new Fugitives more stability at high speeds.

While their front ends are getting longer, Knolly has kept their rear ends on the short side. The Fugitive’s chainstays measure 432/430.5mm (in Slack/Neutral), which is pretty compact for a niner.

Many familiar Knolly features carry over to the new Fugitive frames: The brand’s own Fourby4 suspension linkage remains, as does their 157 Trail rear end spacing and titanium pivot hardware. The frame offers the usual Slack and Neutral shock mount positions, and has a straight seat mast to accommodate long-travel dropper posts.  Cables are routed internally through the front triangle, and the frame is protected with a chainstay guard and a down tube bash guard (which can carry a Shimano Di2 battery inside).

As for fitments the Fugitive uses a 73mm threaded BB, with removable ISCG05 and E-type chain guide/front derailleur mounts. The frame fits up to 29×2.6” tires, and has one water bottle mount on the down tube.

For my one-ride test I rode the Fugitive 138 in its Neutral geometry setting, as I recalled settling on this position when I reviewed the Fugitive LT in 2019. In Neutral the bike’s angles are pretty typical for a mid-travel, do-everything trail bike. At 65.75°, the head tube angle isn’t the slackest out there, but it’s certainly not too steep. We rode some steep rock slabs and rough trails, and I never regretted keeping the bike in Neutral.

Knolly is definitely in favor of lengthened reaches:  A medium Fugitive now measures 466mm, which I find perfectly comfortable (I’m 5’10” tall). Much like the new Chilcotin, I found the Fugitive’s lengthy front triangle puts me in an aggressive yet very well balanced riding position.

The Fugitive’s seat mast is pretty steep, setting you up for efficient pedalling and keeping your body feeling centered over the bike when seated. I’d attribute the bike’s solid traction partly to this, as it always feels like you have adequate weight on both wheels while climbing. I really enjoy how the Fugitive won’t require you to get out of the saddle until the trail gets obscenely steep.

I’ve enjoyed riding some bikes with longer rear ends recently, but I found the Fugitive’s short rear end doesn’t seem to hamper its stability or front-to-back balance. The long front triangle offers enough wheelbase to provide a solid, stable ride, but with the shorter rear end the Fugitive still feels playful. It’s agile and whippy around tight corners and not hard to lift the front end up over obstacles.

Now let’s talk suspension: The Fugitive is a very efficient pedaler, and although Knolly’s rear ends are highly sensitive they won’t wallow under pedaling inputs. With the Fox Float X2 rear shock in Firm mode, I used about 55% of my travel climbing some pretty technical singletrack. Knolly does a great job of keeping their rear wheels tracking the ground below, so I find I can get excellent traction from their bikes while still enjoying added pedaling support from the shock. With a harder hit, the X2 shock will blow-off fairly easily and open up, so you can climb in Firm mode and not worry about clunking harshly if you encounter a short descent on your way uphill.

On the descents, the Fugitive provides enough ramp-up that I got close, but didn’t fully bottom it out on this ride. Our chosen loop was technical and slabby, so without any harsh compressions or big drops I wasn’t surprised to see my o-ring at 90% travel.

The Fugitive’s suspension behaved much like other Knolly’s I’ve ridden, responding to bumps very quickly but not completely numbing away trail inputs. Knolly has honed-in a linkage that does a great job of keeping you feeling firmly planted to whatever you’re riding over. I also find their linkage provides a good amount of mid-stroke support, which not only keeps you from wallowing as you climb but also helps out when rambling along traverses, pumping rollers or jumping.

All in all I’d say the Fugitive is the best pedaling Knolly I’ve yet ridden, and even in the Neutral geometry setting it’s still quite a capable descender. A 29er with this amount of travel should make for an ideal ‘quiver-killer’ bike, and the recent revisions to the Fugitive have only improved its overall capabilities.

The new Fugitive is available in S-XL frame sizes, and color choices are purple with gold decals, raw with black decals, or anodized black with grey decals. Knolly is offering their usual ‘Dawn Patrol’ and ‘Extra Credit’ build specs, with complete bikes starting at $5310 USD. Check out Knolly’s website for further details.