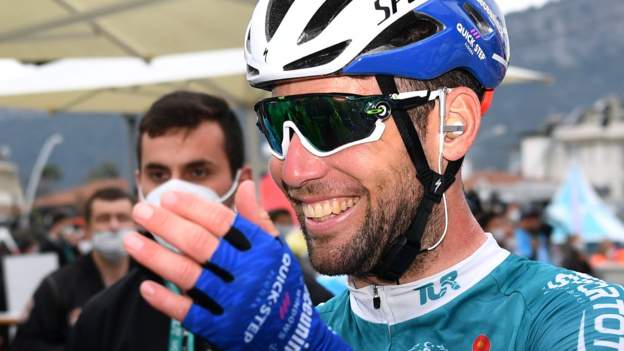 Mark Cavendish sprinted to his third stage victory in a row at the Tour of Turkey after three years without a win.

There was a huge crash with 200m to go which brought down several riders and delayed the rest, leaving about 15 riders competing for victory.

Riders crashed through the barriers, knocking over some fans. It is not yet known if there were any major injuries.

Cavendish, wearing the leaders’ turquoise jersey, unleashed his full sprint just after Alpecin-Fenix’s Philipsen accelerated from a position a few metres in front of him.

The 35-year-old, one of the most successful sprinters in cycling history, overtook the Belgian and had time to celebrate just before crossing the line.

Manx rider Cavendish, who now leads the race overall by 12 seconds, said: “It’s special that the team believe in me.

“It was a drag-strip and headwind finish – slightly uphill. More of a grind, I guess.”

The accident at the end of Wednesday’s 184km fourth stage into Kemer was reminiscent of last August’s high-speed crash at the Tour of Poland in which Fabio Jakobsen sustained serious head injuries after being put into the barriers by Jumbo-Visma’s Dylan Groenewegen.

Jakobsen, 24, is competing in Turkey in his first race since the crash and Cavendish said: “Winning three is irrelevant. I was pleased to see how far Fabio [who was part of Cavendish’s lead-out train] got – [but it’s] not nice for him to see a crash.”

Meanwhile, Britain’s Joscelin Lowden, 33, of Drops-Le Col finished fifth at the Brabantse Pijl one-day race in Belgium to secure one of the best results of her career.

The race was won by the USA’s Ruth Winder of Trek-Segafredo in a photo finish after Dutchwoman Demi Vollering of SD Worx celebrated too early crossing the line.