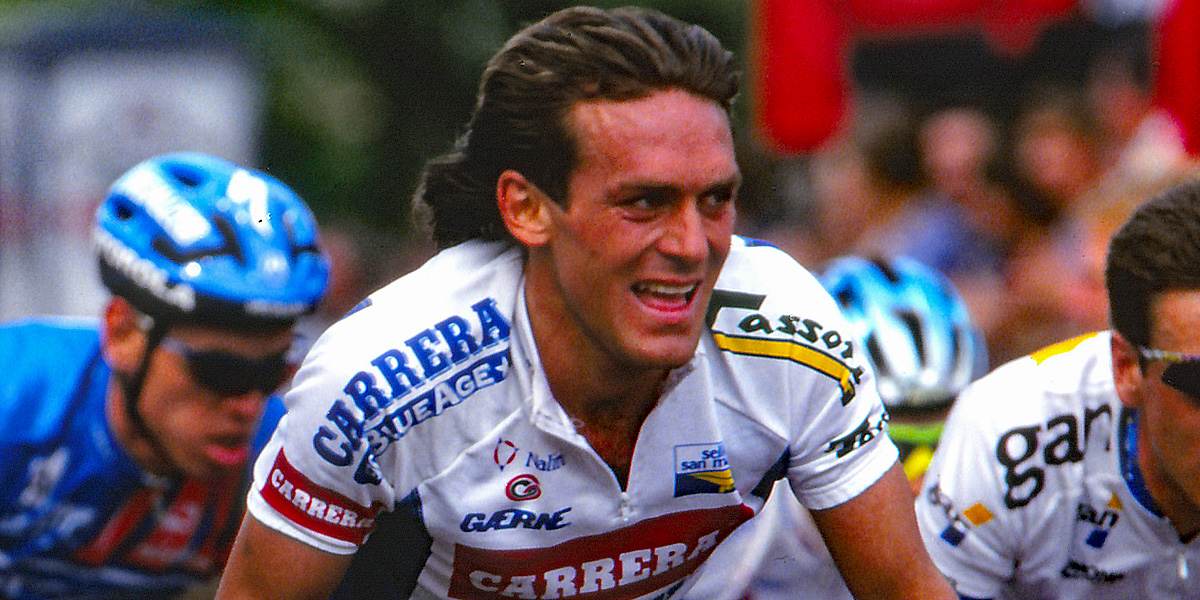 Ex-rider interview: Mario Chiesa stuck with the same manager his whole professional career and, more importantly, his manager stuck with him from 1988 to 1997. As ‘road captain’ he helped to guide riders like Marco Pantani, Urs Zimmermann and Claudio Chiappucci to some big victories. More recently he’s been behind the steering wheel of nine top teams. Thanks to Lucio Belli, Ed Hood caught up with Mario to get his story. 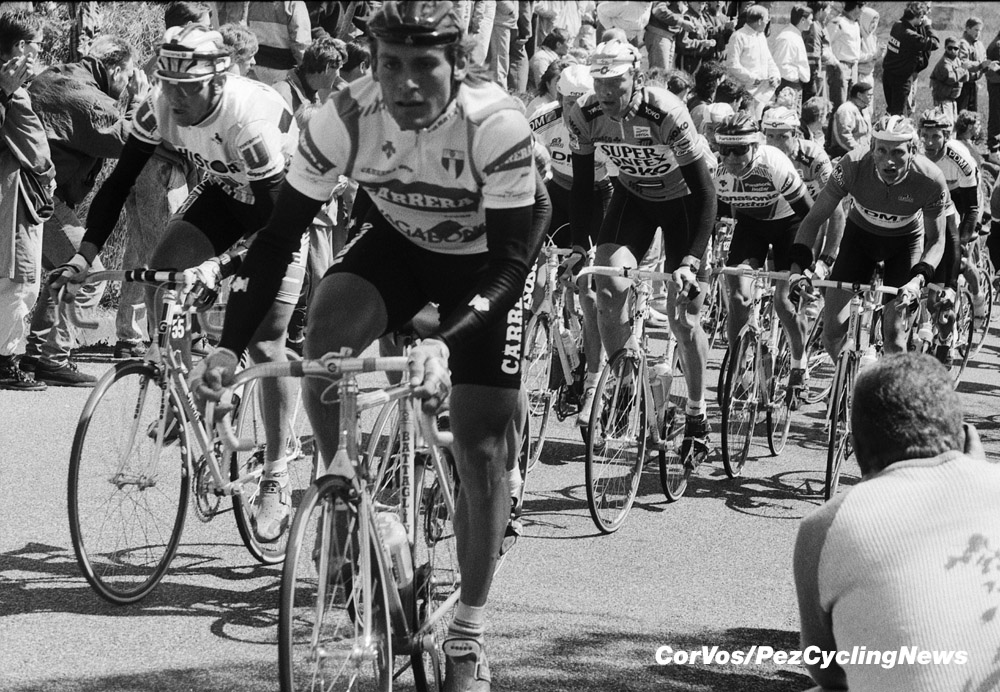 Lucio Belli is a faithful PEZ reader, which is a big compliment because he doubts much of what he reads about cycling in the newspapers. He’s originally from Montichiari – home to the famous velodrome – but is now living in Polpenazze Del Garda with his girlfriend Eleonora. One of the reasons for his doubts about the Media are that he lives just 100 metres away from, and is close friends with Mario Chiesa, a man who rode at the highest levels in the sport for nigh on a decade starting in six Giro d’Italia, five Tours de France four Vueltas. Chiesa has now been in team management for some 20 plus years – there’s little this man can be told about the game of cycling.

When Lucio asked us if we’d like him to interview Mario on our behalf, what could we say but; ‘si, si, si!’ 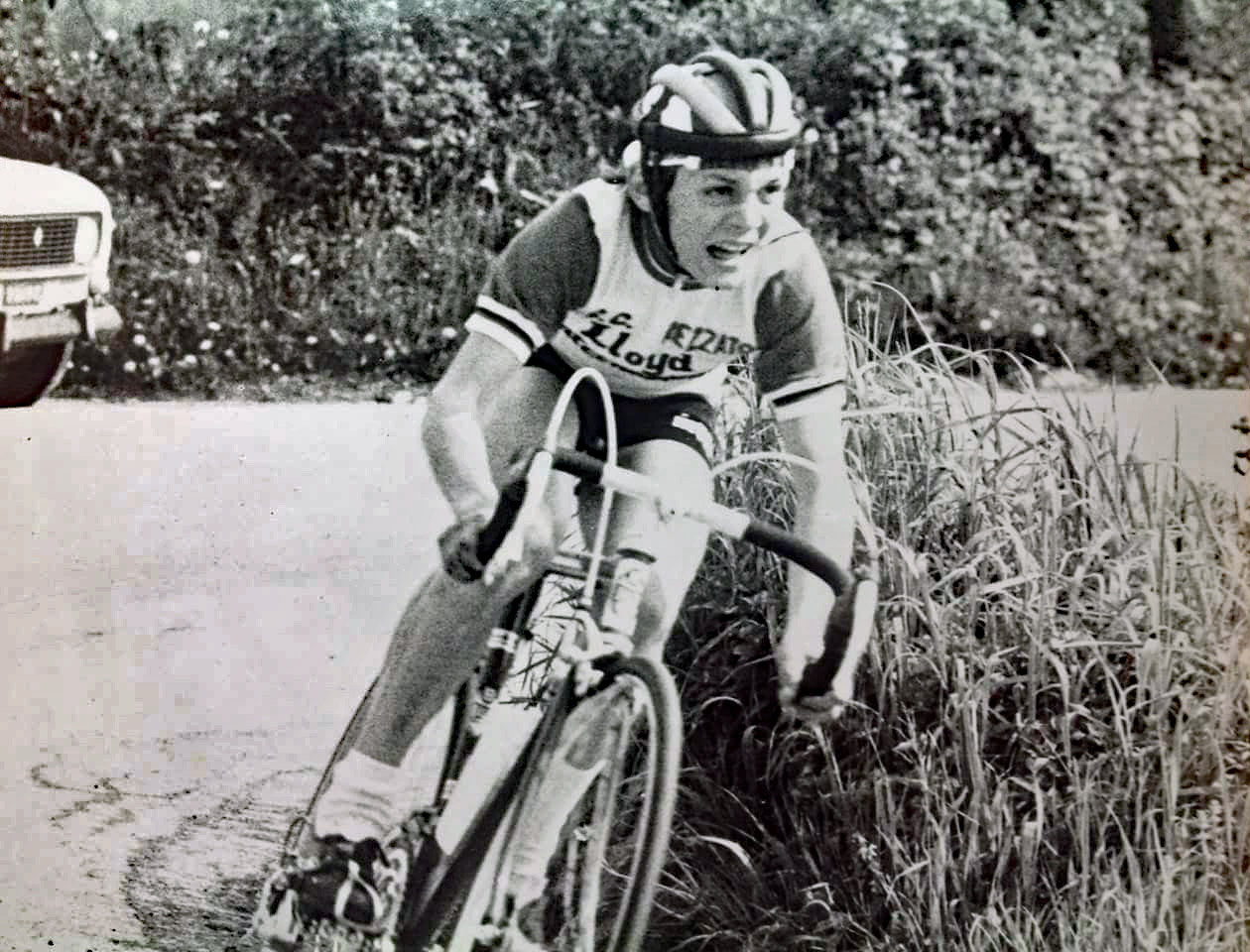 PEZ: Did you ride for the Carrera amateur team before you turned professional, Mario?
Mario Chiesa: Yes, it was called Carrera-Inoxpran and was the ‘satellite’ of the pro team that was already Carrera Vagabond; a few riders and small staff, very much a family environment. 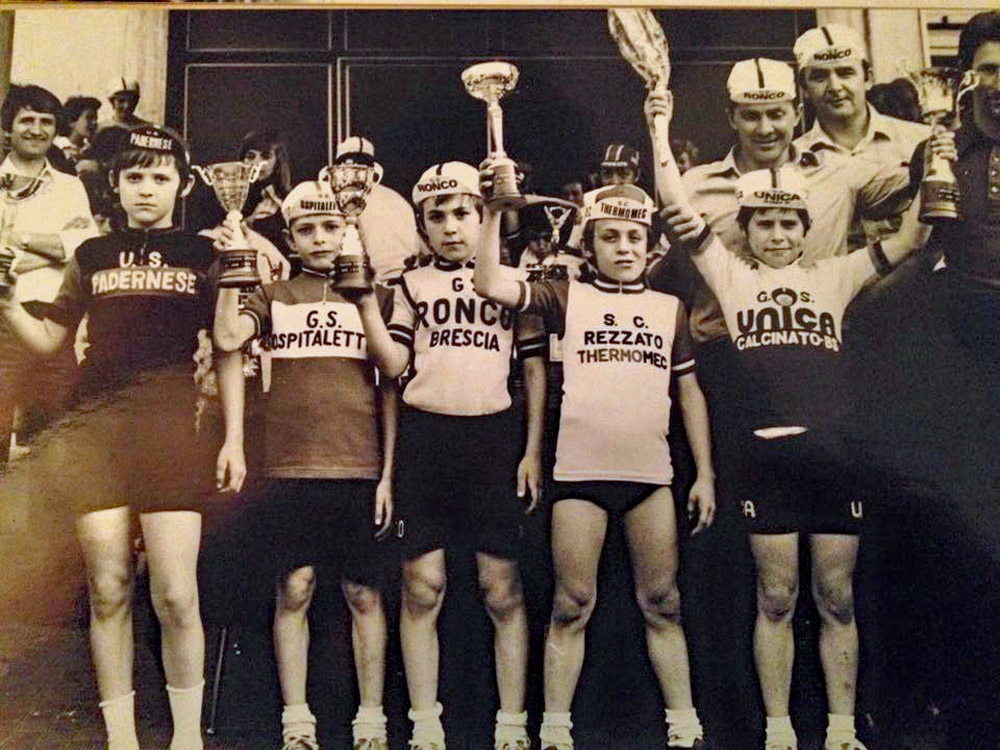 Which one is Mario?

PEZ: You rode a very strong Valle d’Aosta stage race in 1987, that’s a shop window for the pro teams, did that seal your pro contract?
Yes, it was the victory at the Val of Aosta that was the definitive confirmation, I went well also in the Bergamasca Week where I made third on the fourth stage from Poulnikov on Saitov. Ours was a small amateur team with only five riders and we didn’t ride so many competitions – they wanted two riders to step up to the pro team and I was chosen. 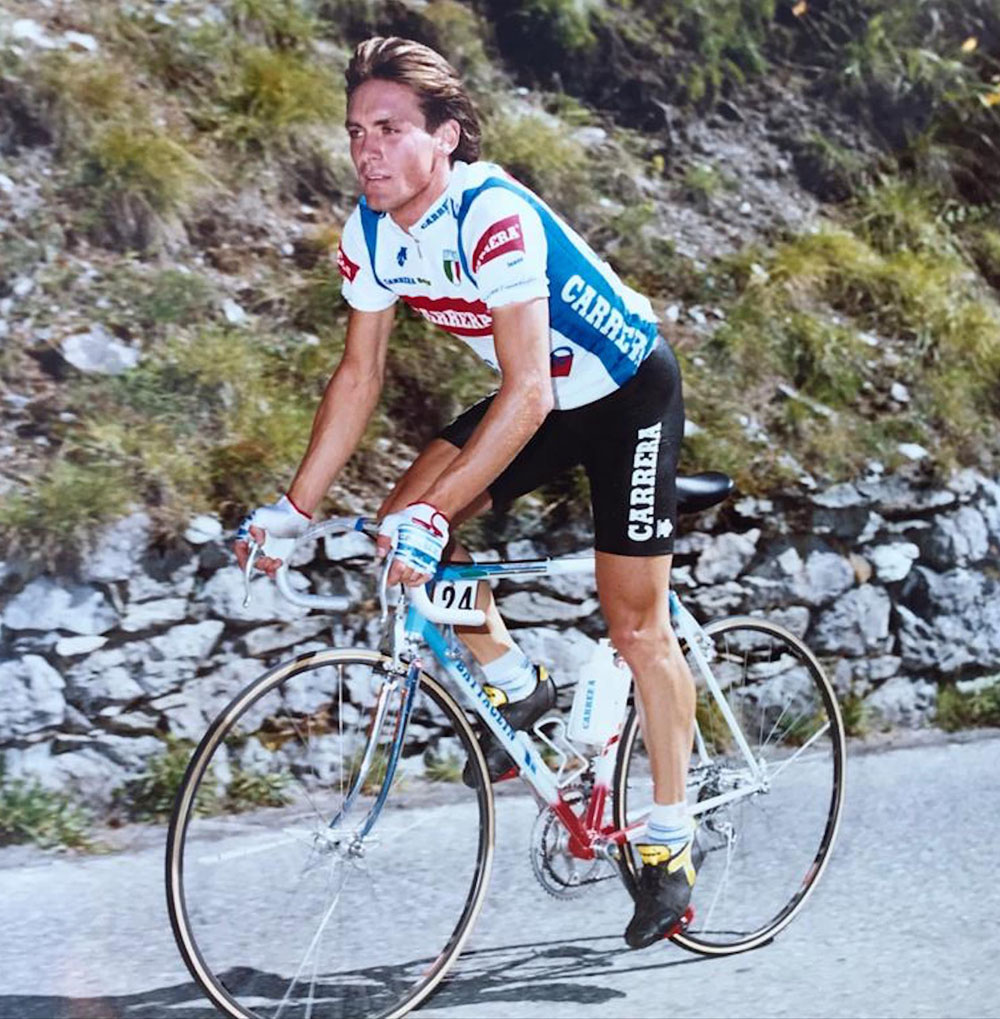 with Carrera for many years

PEZ: Carrera, a big team with big personalities, it must have been a little overawing for a young rider to join such a squadra?
Certainly, I was a young man finding myself in the midst of so many champions, it was a great thing; the first few days I was a little scared, so much respect, but then I found them to be good guys.

PEZ: You remained loyal to Davide Boifava as your manager for your entire career – unusual in the sport.
First of all, the headquarters of the team was close to my home and in the team there was Chiappucci with whom I always got along very well; then for me becoming a sports director with Boifava was the natural evolution of things. 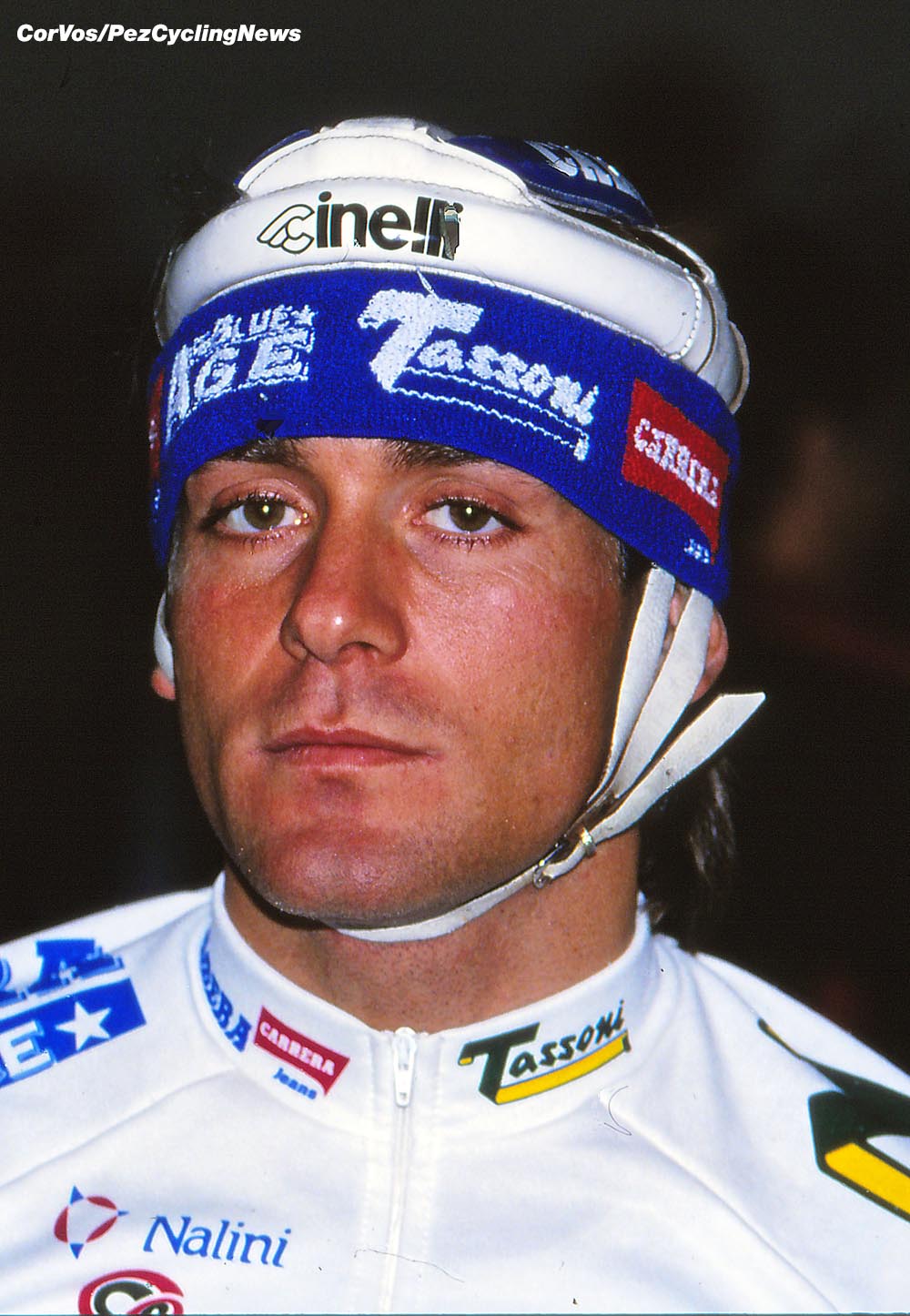 At the start of Gent-Wevelgem 1993

PEZ: The ’88 Vuelta as a neo-pro, that must have been tough?
I remember that we started well with my friend Ettore Pastorelli winning the first half-stage at Santa Cruz de Tenerife and wearing the yellow jersey. But then second half-stage was immediately difficult, Iñaki Gaston won that stage with Laudlino Cubino taking the jersey, which he held right up to Stage 15; Sean Kelly was the final overall victor that year. I wore the best young jersey and tried to defend it but lost it in the Pyrenees due to lack of experience. However, I remember that Vuelta with great pleasure, and I finished it with good legs. I was so young and between the Vuelta – which at the time was run in the spring – and a few northern classics we were away from home for almost two months competing against great champions. 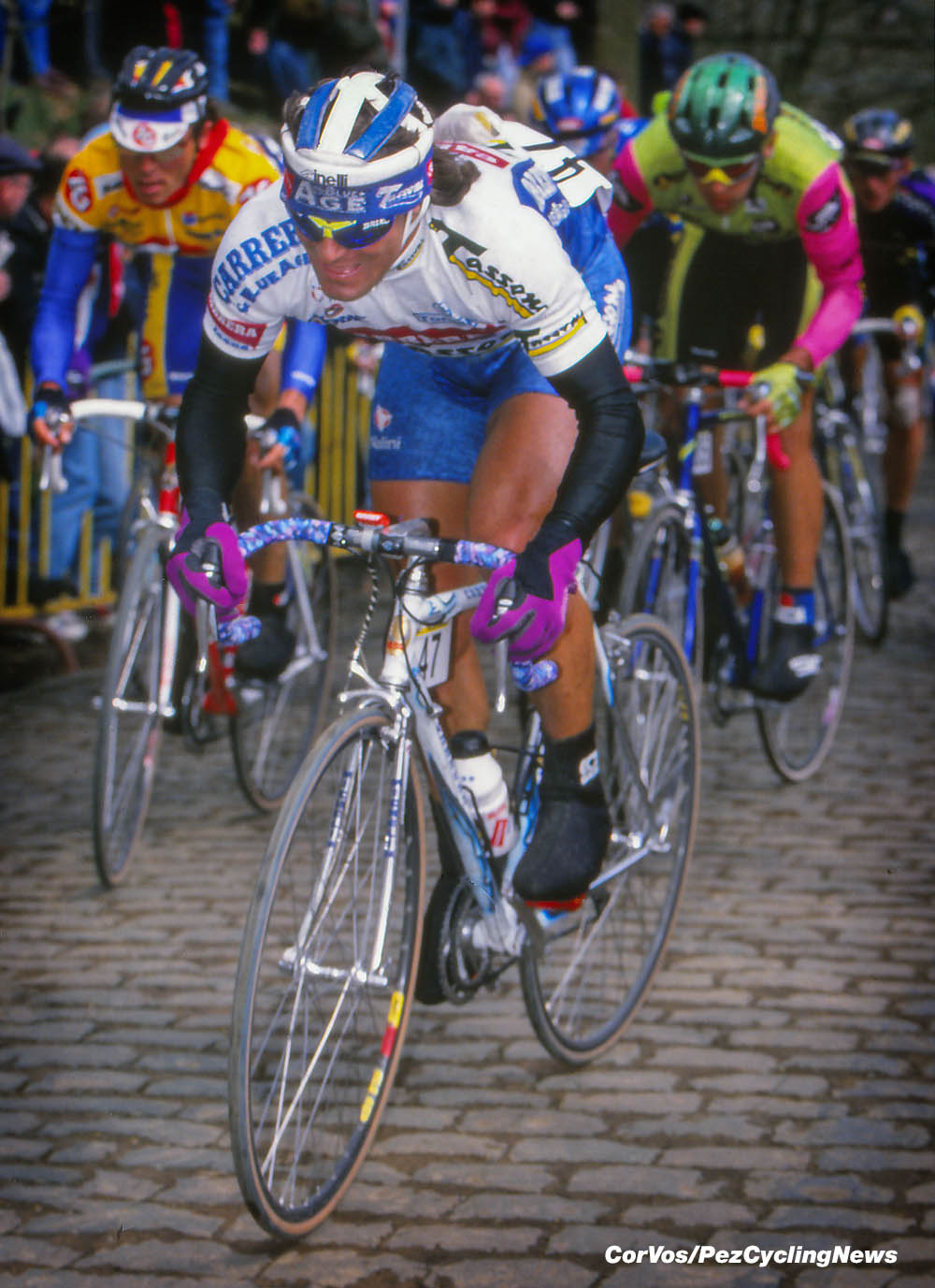 On the cobbles of Wevelgem’94

PEZ: The Giro in ’89, always special for a young Italian.
Yes, the Giro for an Italian is always a very important thing. We had a good team, with Urs Zimmermann for the overall ranking, he finished sixth overall – and Acacio Da Silva for stage hunting; he won Stage Two on Etna. And we won, with Jure Pavlic, the blue jersey of the Intergiro competition (blue jersey) but I still remember the cold I suffered from on the three peaks of Lavaredo. 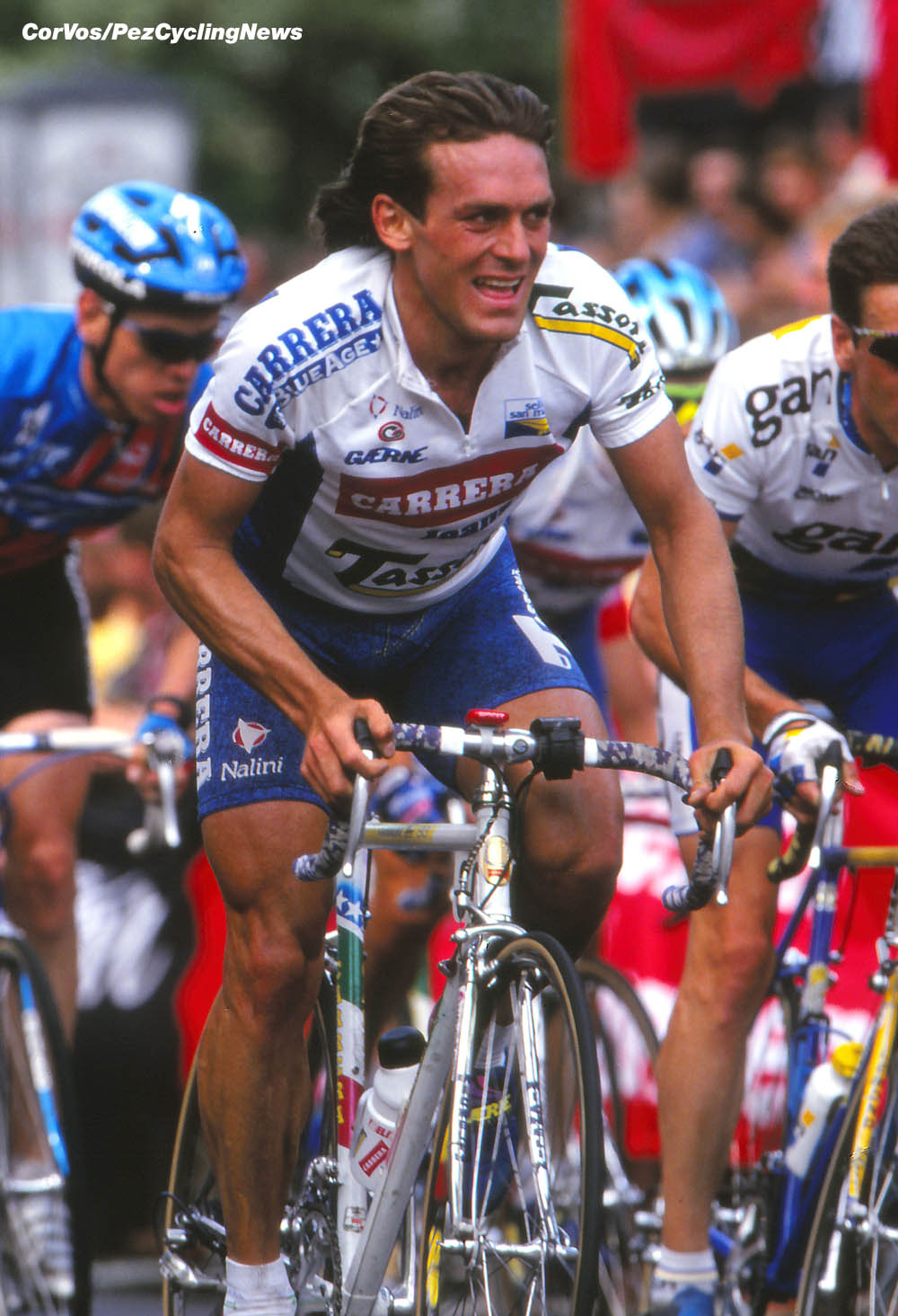 PEZ: Your win in the Trofeo Matteotti in ’90, your memories?
Strangely enough I remember little of Matteotti; maybe it was the tension of the race, my luck was that there were two teams (Ariostea and Del Tongo) who were at war with each other and the breakaway could not get away. When finally the breakaway started I was there and played my cards – I was good but also lucky. 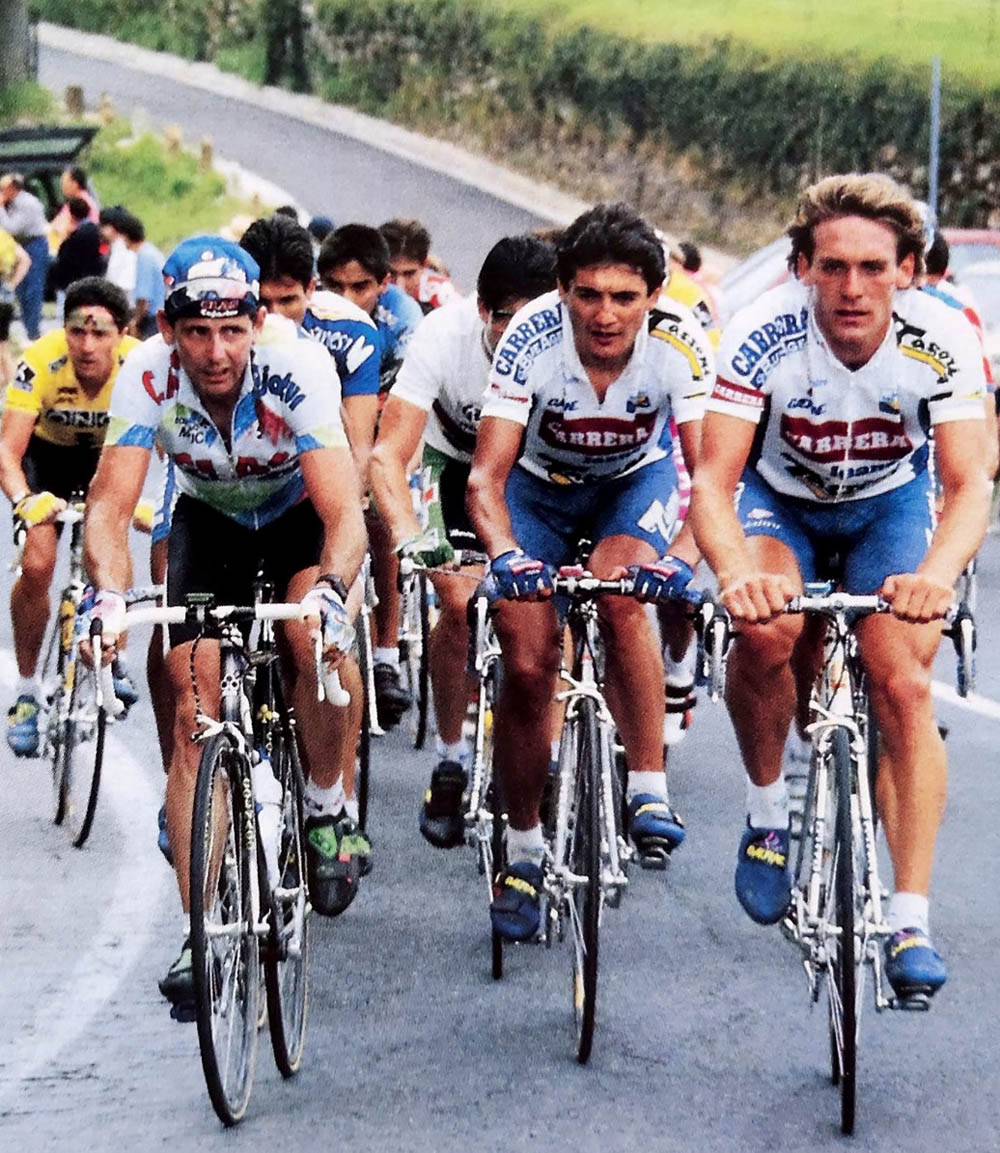 PEZ: Tell us about mentoring the late Marco Pantani at Carrera.
When he became a professional in Carrera we immediately understood that he had an uncommon engine. In uphill training sessions he stayed with people like the Russian, 1996 Giro winner, Pavel Tonkov who was another great talent. Marco at the beginning was a very polite, guy, shy, respectful and of few words. At his first Tour of Italy he was forced to retire for a tendinitis, but the year after in 1994 he showed to all what he was capable of.

PEZ: The Tour de France in ’92, how did it compare to the Vuelta and Giro?
That was my first experience at the very highest level, a difficult Tour but with a lot of satisfaction, with Chiappucci’s stage win at Sestriere and our second place in the team time trial. 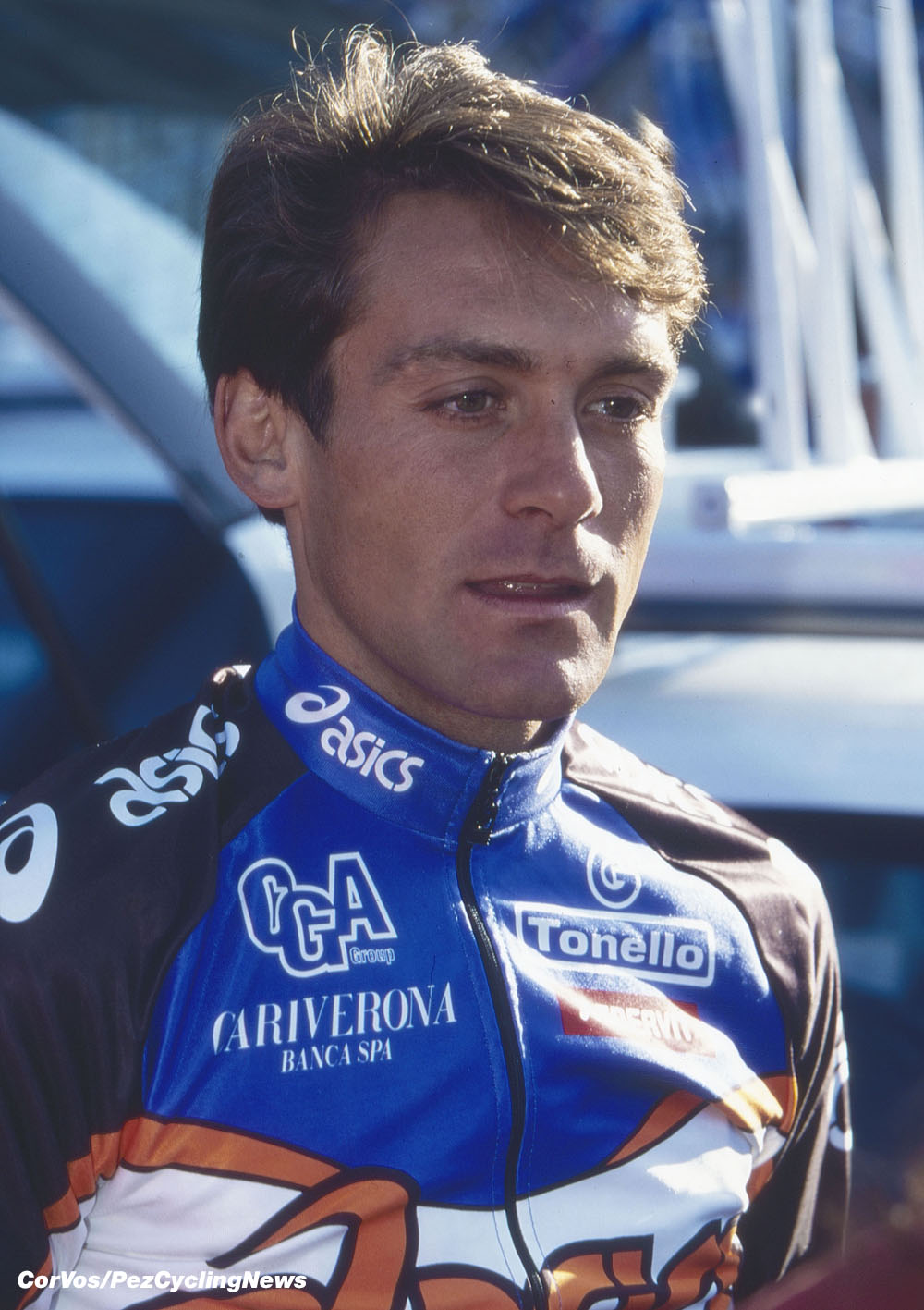 At the start of Paris-Roubaix 1997 with Asics

PEZ: Those Tour TTT’s must have been savage with guys like Bontempi in the squadra?
Definitely wild – you said it right! When I think about it I still feel the pain in my legs.

PEZ: Your final season with Asics – you were only 31 years-old, why quit?
I started as a sports director in 1998 at ASICS then in ‘99 Riso Scotti. It was a choice I made looking to the future. I could have continued as a rider but I preferred to look ahead and start moving in a parallel world by getting in the car. Let’s say that I anticipated the times a little but I think I made the right choice. 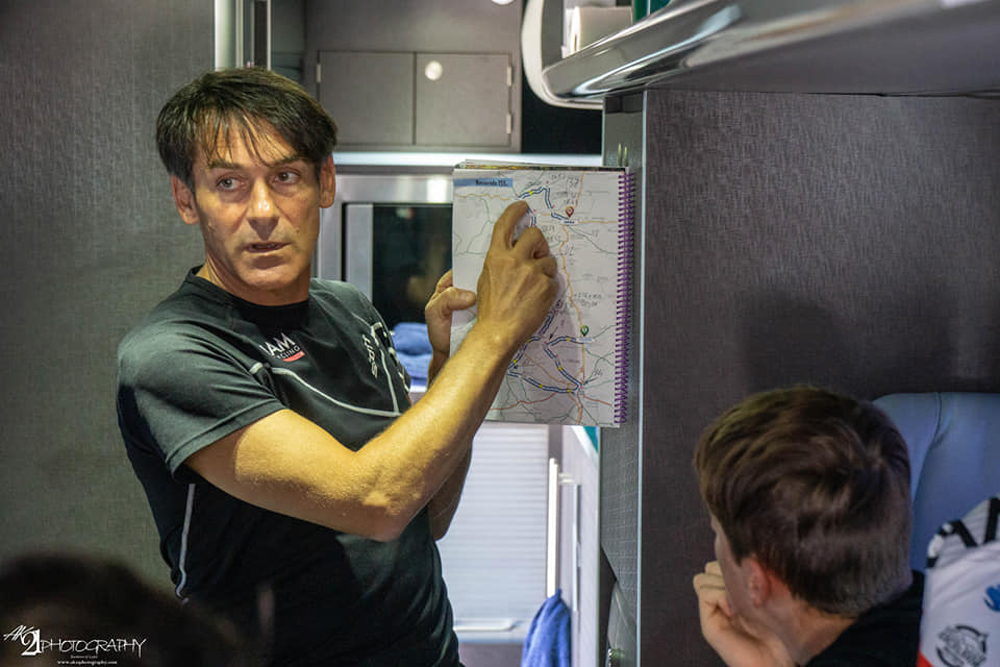 PEZ: You moved into team management with Riso Scotti, how difficult was it to make the transition to the team car? The first year as sports director with Asics there was Serge Parsani (who then went to Mapei) there, he was a man of great experience and from whom I learned much, therefore it was easier for me. In ASICS there were many great champions such as Bartoli and Bettini; when the team wins it is easier for everyone to do their job, you are calmer. The following year with Riso Scotti and without Parsani let’s say that I had to manage on my own, but still I did it – all experience. 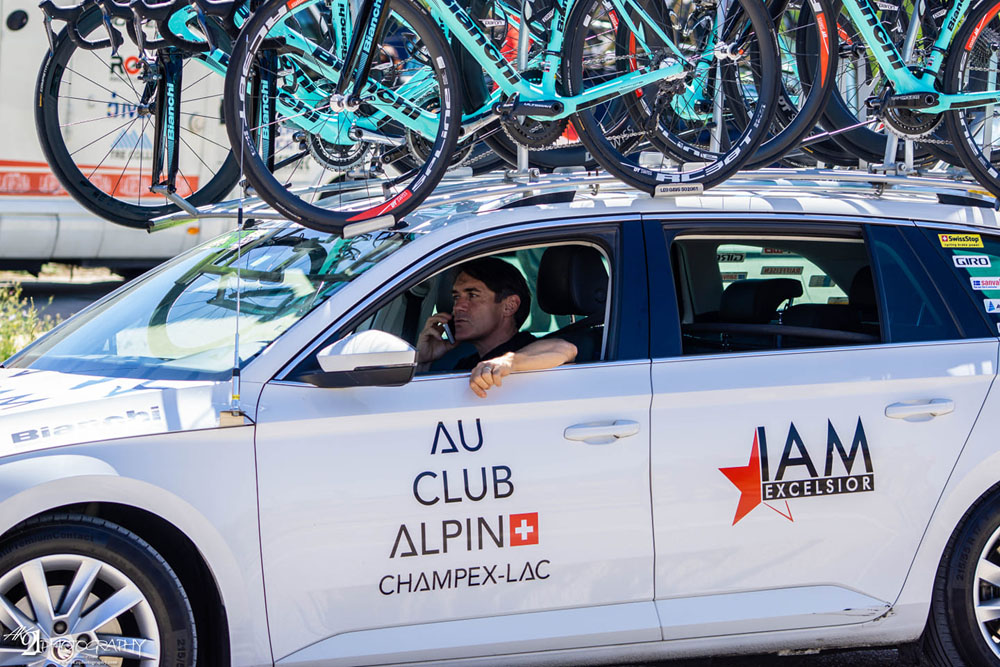 Not easy being a DS

PEZ: You’ve managed with a few teams: Riso, Fasa, Tenax, Liquigas, IAM, Bahrain – your favourite and why?
I’ve had a good time everywhere, but if I have to name names I’d say Fassa, Liquigas and IAM for their mentality, organisation and professionalism. But I repeat, it’s not that I’ve had any particular problems with the others. 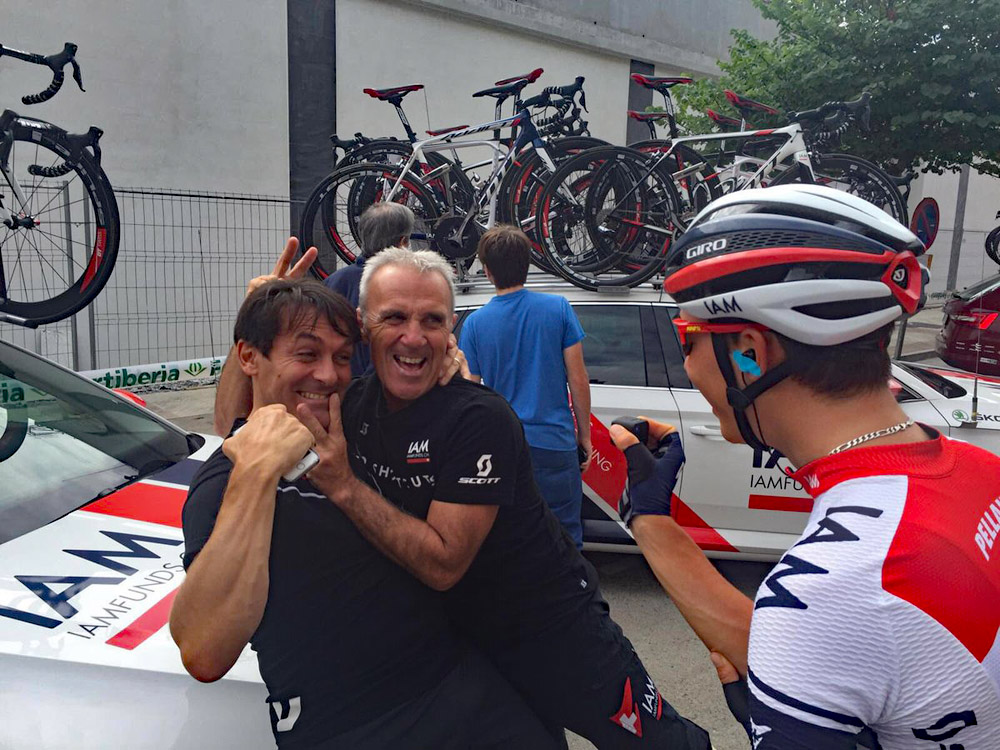 ‘I’ve had a good time everywhere’

PEZ: How have managerial styles changed in the time you’ve been in the sport?
Everything has changed with the World Tour; once, even the big teams were managed as a family. There was dialogue between all members of staff; today in a large team everything is airtight, all sectoral, it has become less family and more industry. 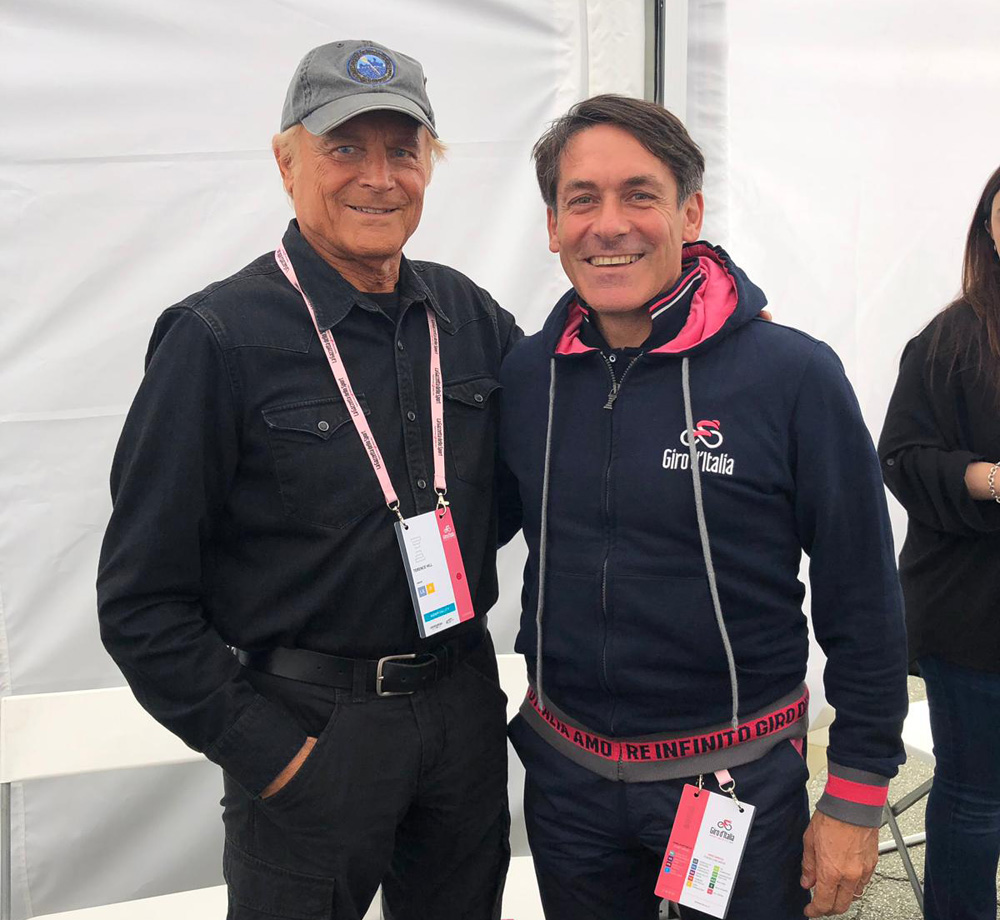 PEZ: Which day of your career is most memorable?
I’ve had so many great memories but I’d say 1992, the first Tour de France and the arrival on the Champs Élysées. 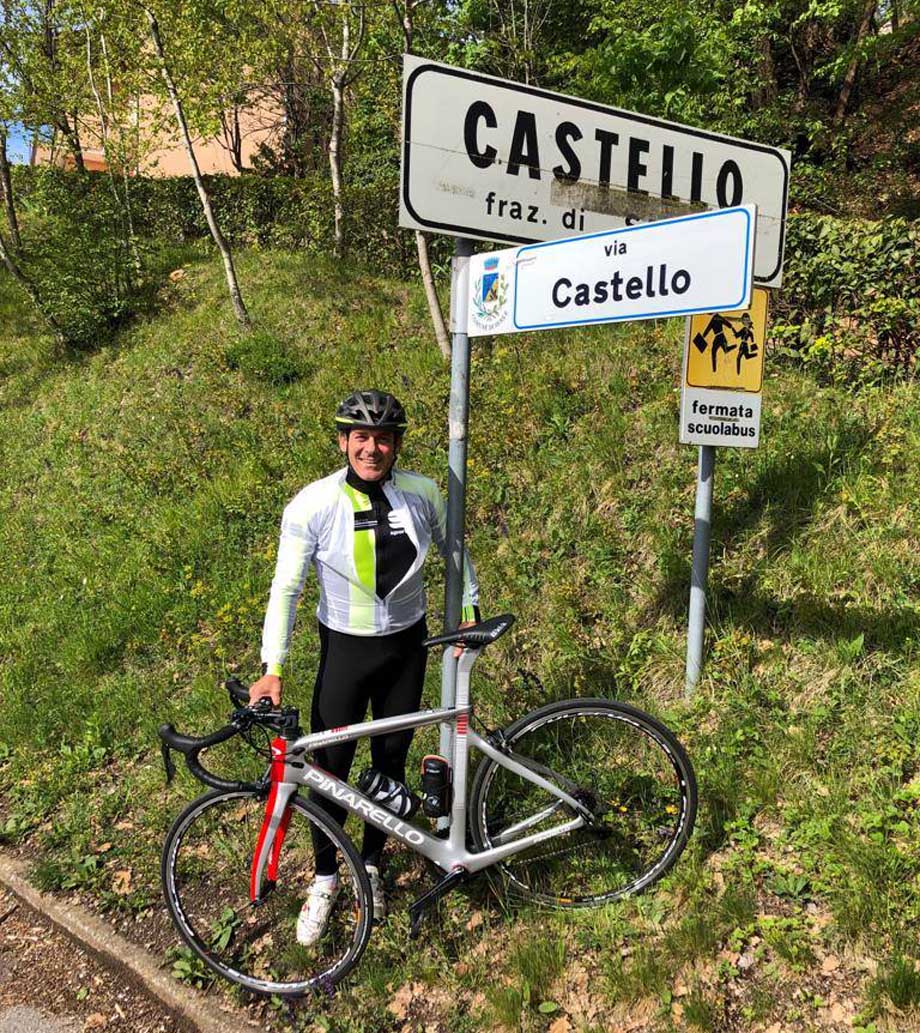 Still on the bike

PEZ: Looking back, anything you would do differently?
No, I would do everything the same. 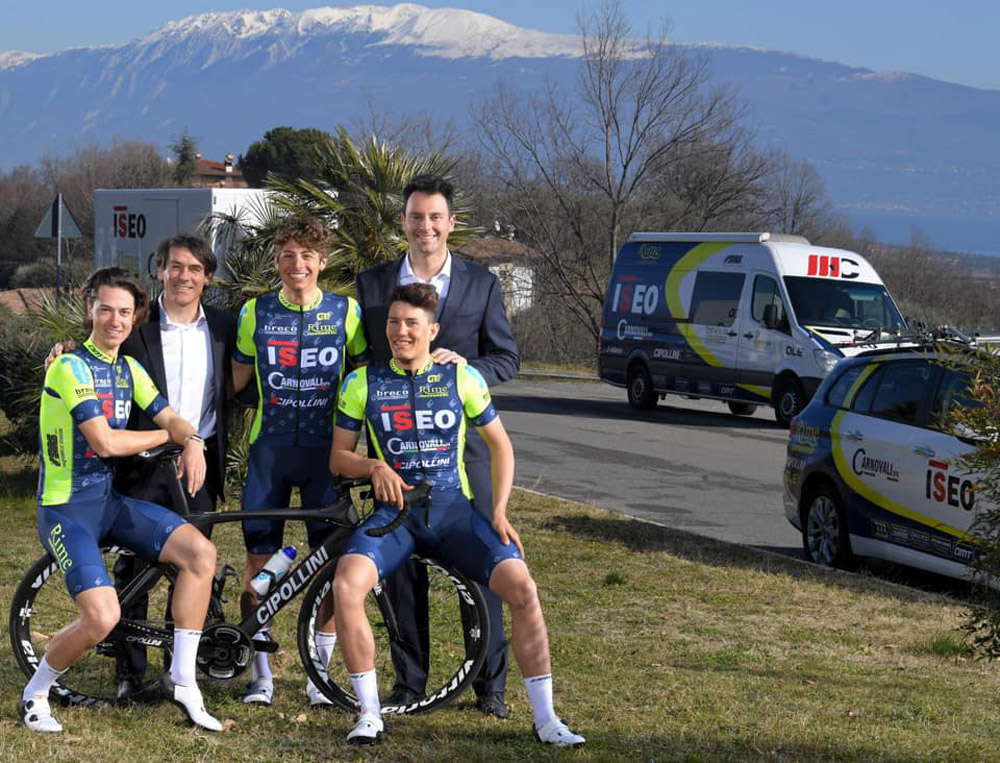 With the ISEO team

PEZ: What are your plans for 2021?
To bring a rider from my current team (ISEO RIME CARNOVALI SIAS) into the pro ranks and finish in the top 3 at the Giro Bio. 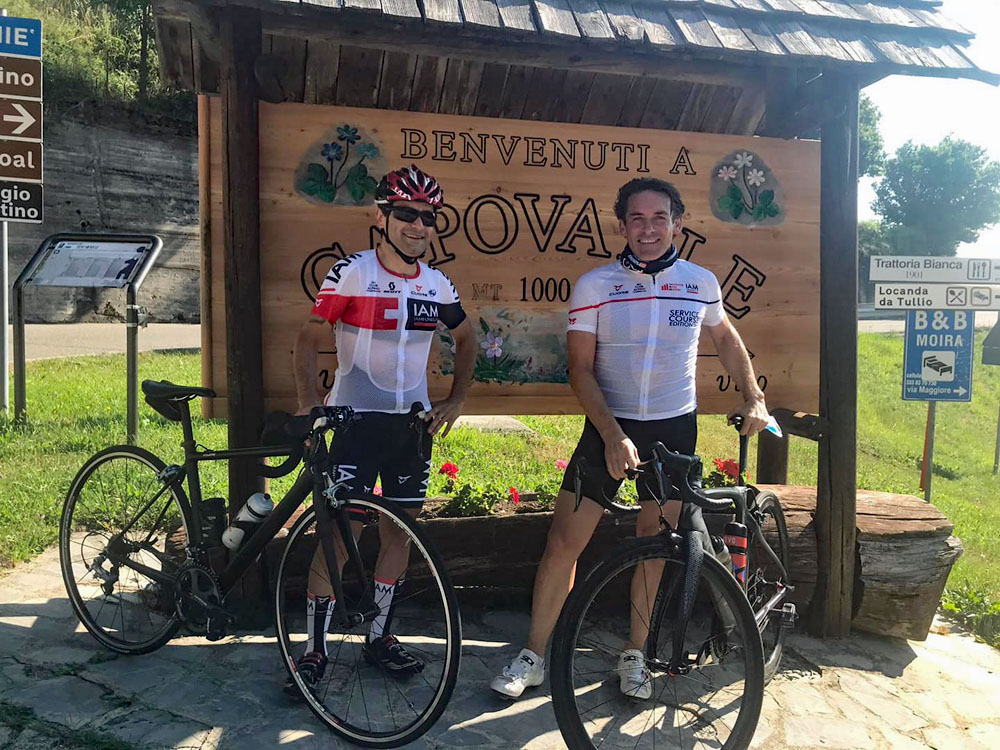 # With thanks to Lucio Belli and Mario Chiesa. Photos from Mario’s collection, if not other wise credited. #