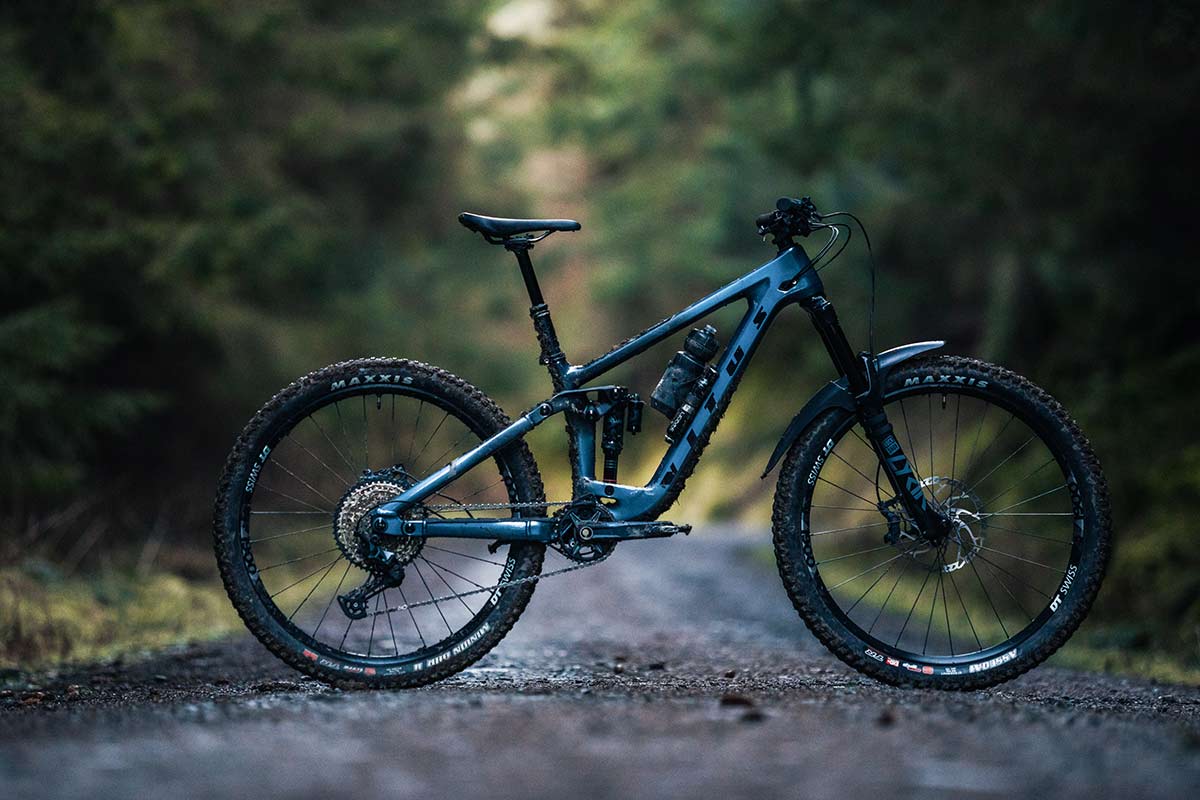 For this model year, Vitus have updated their line of enduro and trail mountain bikes, overhauling their suspension designs adding significantly more progression. These are some very good value for money bikes, with the direct-to-consumer brand offering up a complete build of the carbon 2021 Vitus Sommet from just $2999.99.

With such competitive price points, these bikes are an awfully attractive option for riders on a budget, who are looking for a capable mountain bike with a respectable parts list. To find out if this bike is on a par with the vast array of more expensive counterparts, we got the mid-range 2021 Vitus Sommet CRS in for a thorough testing on our home trails of the Tweed Valley, Scotland.

All photos by Finlay Anderson

The 2021 Vitus Sommet CRS 27.5″ is a 170mm travel enduro mountain bike frame paired with a 170mm travel fork. Across the range, a carbon front triangle is married to an aluminium rear-end with internal cable routing throughout. At 5ft 4″, the Vitus sizing chart recommends a small frame for myself, suited to a rider height range of 5ft 2″ up to 5ft 6″.

My thoughts on fit and geometry

With a reach of 424mm and a seat tube length of 380mm, the small frame was a very good fit. I was able to settle in comfortably with this frame’s geometry remarkably quickly. Proportionally, I’ve a relatively short torso. So, while the reach measurement was pretty bang on for me, riders at the upper end of the range may feel it is a little on the conservative side. The Sommet runs a 45mm stem, so there isn’t a lot of scope for increasing reach with stem length without sacrificing the handling character.

All that said, the Sommet features short seat tube lengths across the S-XL frame size range (380mm-470mm). This means riders on the borderline between frame sizes will be able to remove standover considerations from the equation, making a decision based on their preferred reach measurement.

The 2021 Sommet has a modern set of geometry figures, well-suited to the bike’s intentions. Head and seat tube angles, as well as bottom bracket height, are adjustable through the use of a flip-chip positioned at the bottom shock mount. A quick trail-side fix slackens the head angle from 64.5° to 64°, concomitantly lowering the BB by 6mm. I rode the bike in both settings, to see whether that tiny adjustment actually makes much of a difference… more on that later.

Climbing on the 2021 Vitus Sommet

Hopping onto the 2021 Vitus Sommet CRS for my first ride, I was struck by how good the seated pedaling position felt straight off the bat. The small frame runs a 76.5° effective seat tube angle. That’s fairly steep and bang on trend; we’re seeing seat angles steepen up year on year for the enduro category of full suspension bikes.

That steep seat tube angle puts the rider’s hips in a commanding position over the bottom bracket. I felt able to utilize the full force of my quads in the pedal stroke, pushing almost directly downward. There was no need to slam the saddle forward on its rails to achieve this. I ran my favored Ergon SMC Women’s saddle in the middle position.

Vitus have ensured that all riders, no matter their height, should get this same seated pedaling ride feel I experienced on the small frame. That’s because, as you go up through the frame sizes, the effective seat tube angle steepens up until it reaches 77.7° on the XL. No one should feel like they’re doing a reverse version of Obree’s superman.

I spent the first few weeks of testing in the “low” position, with the slacker head angle of 64°. Pedaling up long, gentle-gradient fire roads, there is definitely a noticeable amount of pedal bob. It’s not so significant that it becomes distracting, but it’s enough to encourage me to make use of the RockShox Super Deluxe Select+ threshold lever which firms up the rear end, making pedaling feel more direct and efficient.

Using the flip-chip to switch geometry into the “high” position, pedal bob is still present. But again, the threshold lever on the shock means this is something of a non-issue… so long as you remember to turn the lever back to the open position before you drop into a trail.

I can’t say I noticed much of a difference in uphill ride feel between the two geometry settings offered. The bike’s pedaling character remained somewhat unchanged. Though, I can say that the “high” position with the steeper head angle did make it a little easier to keep the front wheel down on steep technical climbs.

Speaking of those technical climbs, I’d rate the Vitus Sommet’s ability here as fairly average. But, don’t get me wrong. It certainly hasn’t held me back in this regard. I am still able to clean the valley’s technical climbs but, I have found the need to be more aggressive and direct. The rear wheel does have a tendency to get hung up on square edges, noticeable when you’re pedaling up a steep sections littered with roots.

Onto the Vitus Sommet’s principle intention; going downhill. I ran the shock at 30% sag, as per the manufacturer’s recommendation. My first impression: this thing rips! I found myself able to pull tight out of corners, giving me heaps of time to set up wide for the next.

I noticed immediately that I was over-doing it in this regard, aggressively leaning the bike in much earlier than was actually necessary. The bike is refreshingly agile, and goes well with a more relaxed and measured riding style. With the shock at 30% sag, the bike rides quite deep into its rear wheel travel, encouraging that easy over-steer I was referring to.

But, that is no bad thing. I prefer a bike that’s really easy to flick around corners all day long over what might be considered the other end of the spectrum; a cumbersome bike that has a tendency to under steer and needs to be wrestled through every turn. The former is a lot more enjoyable and gives a more predictable, manageable ride feel.

The bike feels super confident on steep terrain with the 64° head angle feeling plenty slack enough. When the trail levels off a bit, becoming a faster, rougher, straight line affair, I did find the rear wheel had a tendency to get hung up on longer rooty sections, killing off some momentum.

The 2021 Vitus Sommet has, overall, a far more progressive leverage curve than its previous iteration; 25% versus the former’s 13%. However, it is important to note that the end-stroke progression is actually more linear, with very little ramp to speak of. That was evident with the relative ease with which the shock bottomed out over fast, rough terrain. Was the rebound fast enough? Perhaps not, but I ran it in the fastest (open) position.

To remedy this, I opened up the shock’s air can to see what options I had in the way of volume spacers. The Select+ shock on our test bike came with two volume spacers. I removed both of these, replacing them with a GnarDog spacer, which is the equivalent of 2.5 regular spacers. I then adjusted the air pressure to achieve that same 30% sag.

This fixed the issue of regular bottom-out. I still experience it occasionally, but only when doing ill-advised hucks to flat. The alteration meant the rear end was now able to resist bottom out, thanks to the additional ramp provided by the now reduced volume of air. Not only that, but it also made the rear end feel a whole lot more lively.

I wouldn’t say it felt sluggish before… I had found it perfectly acceptable. But, after the volume adjustment the rear suspension seemed to come to life a little more, giving me more energy in return when pumping through rollers, popping off small lips and generally hopping from line to line. The 2021 Vitus Sommet has been a joy to ride down the natural, steeper trails of the Tweed Valley.

While I spent most of my time riding in the “low” position, I did do a chunk of descending with the flip-chip in the “high” position. I did detect a subtle difference in ride feel, noting that, on some of our steepest, most technical trails with roll-over rock features, I occasionally felt a bucking sensation, finding that I wasn’t able to get the rear wheel back on the ground as quickly as I’d ideally like to in order to initiate the next turn.

I weigh around 60 kg in full riding kit. With that in mind, my final shock and fork settings that I settled on were as follows (the Select+ shock doesn’t have any compression damping adjustment):

You may be surprised to see that I preferred to run quite a lot of rebound damping on the fork; I was too. To double-check myself, I played around with running a faster rebound setting but found that I had trouble getting the front end to behave. Our trails wind through dense plantation forest and are thus, littered with tightly-spaced furrows. To prevent the fork feeling too much like a pogo stick over these features, I had to run the rebound on the slower side.

For the duration of the test period, I ran my tire pressures consistently at 17 PSI (front) and 19 PSI (rear).

For a $2999.99 bike, I think the 2021 Vitus Sommet CRS represents exceedingly good value for money. Standout components include the Shimano SLX 4-piston brakes which have been absolutely flawless throughout this three month test period. Another standout component has been the Shimano SLX 12-speed groupset which has provided crisp, reliable, qualm-free shifting throughout, also.

Notes on the build

Overall, I felt the build quality of the 2021 Vitus Sommet CRS was good. It was also very nice to see that Vitus ship their frames fitted with a comprehensive paint protection kit that covers the top tube, head tube, underside of the downtube and the outside faces of the chainstays.

While the flip-chip geometry adjust is, in theory, a quick trail-side fix, our initial experience of this was far from easy. On un-threading the bolt, we noticed that despite it being free of the thread, it was still jammed in the frame. We had to knock it out gently to encourage it free.

On inspection of the bolt, we noticed that part of the shaft was a little wider than the rest of the shaft. In order to get the bolt back in the frame, we had to file it down in this region to remove the subtle protrusion. It is likely that, during the initial build of the frame, a small amount of paint was chipped off the side of the bolt-mounting hole, and that paint was latterly compressed into the shaft of the bolt itself as it would have had nowhere else to go.

The 2021 Vitus Sommet CRS we tested here retails at $2999.99. It is the middle of the range model and, like most things in the bike industry at the moment, is currently out of stock. We are waiting to hear back from Vitus as to its future availability.