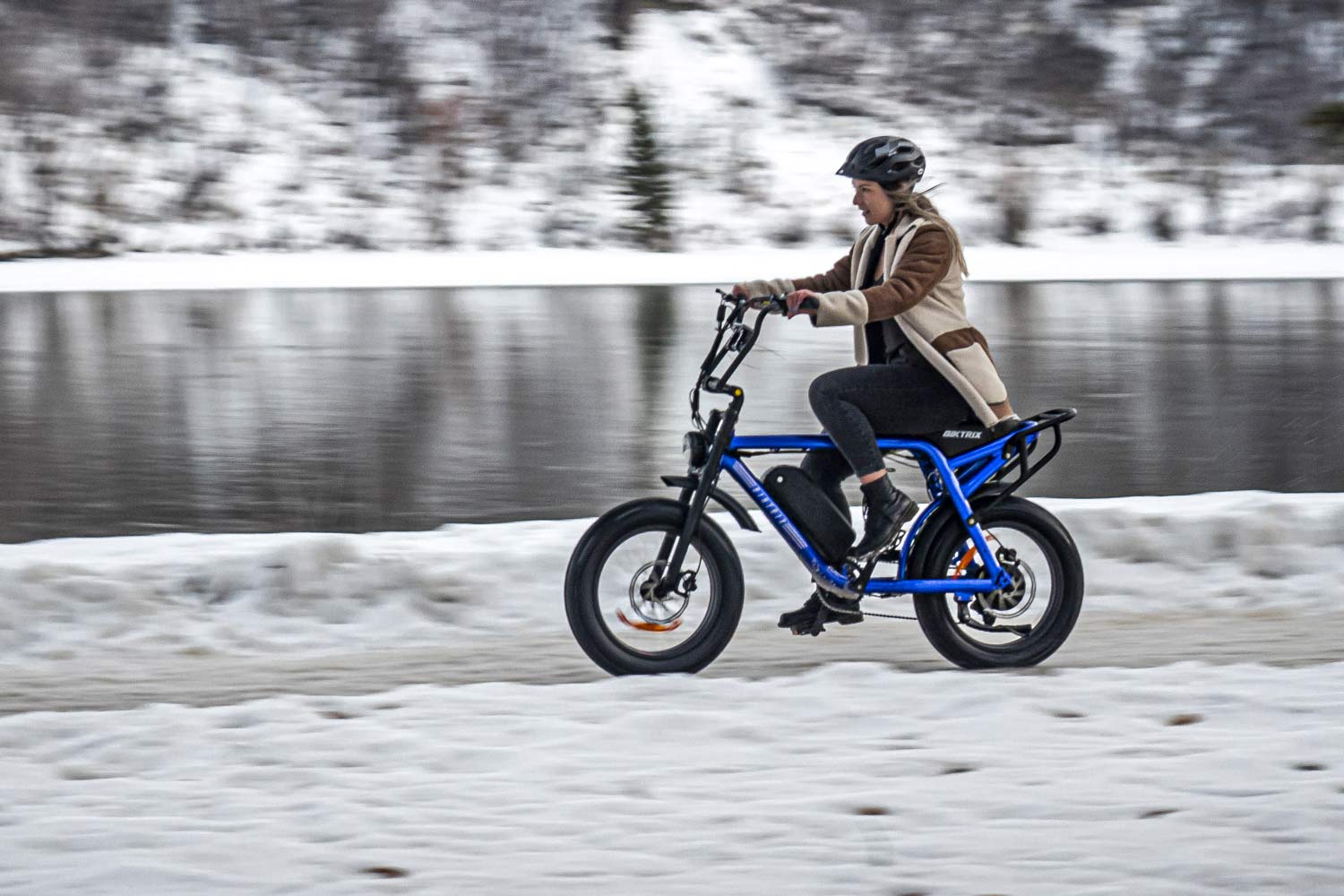 The new Biktrix Moto is one of those odd creations that we aren’t entirely sure about – is it an e-bike or is it an electric motorcycle? Biktrix calls it a moped, which doesn’t entirely clear up the matter, since it has both pedal-assist and throttled means of propulsion. So, let’s just embrace that it’s a quirky form of alternate electric-powered transportation that might get some people out of a car, and definitely will make some existing cyclists grin from ear to ear as they cruise around town…

OK, watching that video makes it pretty clear how Biktrix expects most people to ride their new electric Moto moped… sit back and crank the throttle to cruise around town on this electric motorcycle. But let’s not be entirely too hasty, this is actually still a Class 2 e-bike which means it offers pedal & throttle-assist options and a 20mph / 32kph top speed that means you can ride it in most places like a pedal-assist only e-bike.

Canadian e-bike company Biktrix makes a number of conventional-looking cruisers, hardtails & full-suspension eMTBs, you know the ones that just replace the bottom bracket with a motor and bolt a heavy, bulky battery on the downtube. The Moto is not one of those. Instead, the Moto isn’t really intended for trail riding in any way, but as more of an alternate form of transportation. It just so happens to get a set of 4″ tires that will make it as happy on dirt roads as it is on city streets, even with what appears to be a super basic coil suspension fork (shown only in studio photos) and no rear suspension.

And you know, it looks cooler than an e-hybrid city bike.

The Biktrix Moto e-moped is built for long-range with the standard 1008Wh battery powering the 750W, peak 85Nm Bafang rear hub motor for a claimed 50+ miles. It even offers a double battery setup option to get over 100 miles out of a single charge. And according to Biktrix that’s with the Moto doing most of the work, not with you pedaling.

Class 2 limiters top the thumb throttle-controlled Moto out at 20mph. But Biktrix’s own user-customizable settings via the built-in speedo display let you select a ‘No Limit Motor Power’ mode that will top out at 28mph for “off-road use only” which would make it subject to other regulations.

You can pedal too, though. The Moto offers pretty easy ~2:1 single-speed gearing (42:23T) with either 20″ or 24″ wheels, and 3 levels of pedal assist. But, don’t expect to spend long rides pedaling along at a nice consistent cadence-building fitness. The fit of the Moto is motocross-inspired, with a long seat that you can slide around on to find a comfortable position, but isn’t exactly optimized for pedaling ergonomics or proper leg extension.

The 6061 alloy frame includes an integrated rear rack and mini moto-style fenders. Wide 4″ small diameter fat bike tires on 80mm, 36H rims help pout the power down, and Tektro hydraulic disc brakes with 200mm rotors will bring you back to a stop. And a built-in bright LED headlight & rear taillight make sure you can see & be seen, powered off the main battery.

All that said, the Moto is kinda cool… like a moped is ‘kinda’ cool, but without the hydrocarbons getting burned and exhausted out the back. Probably no one who reads our site is going to ditch a real bike for one of these e-motorcycle things, but maybe some people might but aside a car or even a gas-powered motorbike to cruise around in electric-powered silence. It does look fun… kind of like a low-budget cruiser Cake.

The e-Moto is available in two sizes – with 20″ or 24″ wheels, ostensibly to fit small or tall riders, starting at $2300 or an extra $600 for the double battery version. Three frame colors of the Biktrix Moto are available for pre-order now, with free North American deliveries starting later this month (April 2021).